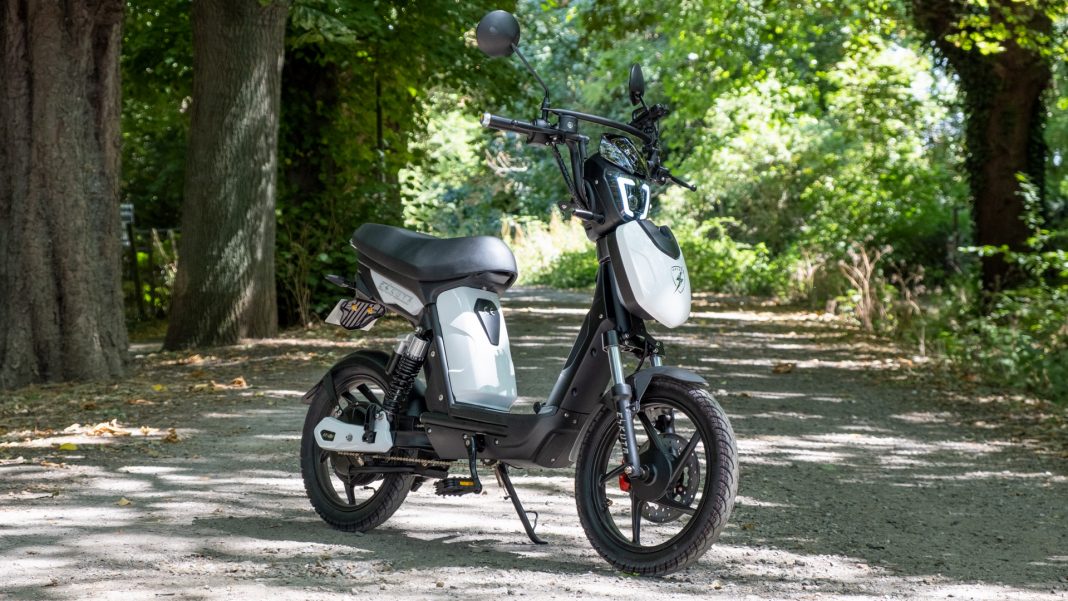 The Eskuta SX-250 Series III is an electric bike that can easily be mistaken for a moped. It has been designed from the ground up to look, ride and feel like a motorbike.

Look beneath the surface though and you quickly realise it ticks every box for what is required of an ‘electrically assisted pedal cycle’. The rider must continuously turn the pedals, which power the motor that has a maximum output of 250W and it cuts out when the bike is travelling at more than 15.5mph.

That’s important as it means anybody aged 14 or over can ride it. You don’t need a licence and it doesn’t need to be legally registered, taxed or insured. Don’t mistake not needing to be insured with should not be insured though. It’s a really good idea to insure any e-bike due to value.

So, has the Warwickshire-based Eskuta been successful in combining the design of a motorcycle with the cost savings and freedom of an e-bike?

In terms of price and performance, there is nothing similar on the market to benchmark the Eskuta against.

It retails at £1,795 which is very reasonable for the build quality and specifications. You get a lot for your money including a range of up to 50 miles, motorcycle-grade braking and suspension, tubeless tyres and LED lights that enable you to see and not just “be seen”.

You also get features not commonly found as standard on an e-bike, such as an alarm and immobiliser, storage box, horn, indicators, rear-view mirrors and handlebar controls. The alarm and immobiliser in particular are a welcome security addition that provides added confidence when being away from the bike. It’s a common-sense feature that other e-bike manufacturers really should consider adding to their models.

As a vehicle that looks like a motorcycle but qualifies as an e-bike, Eskuta has certainly aced its design specifications. The moped-like design does however prompt one potential concern for tall (over 6ft/182cm) or short riders (under 5ft/152cm).

That is that neither the seat height nor the position of the pedals can be adjusted. This creates a degree of discomfort on longer journeys as it creates knee strain. Nonetheless, this might not be an issue for everyone, so one might want to try the SX-250 prior to purchasing it online.

At 54 kg, the Eskuta is a heavy bike and lacks the agility and nimbleness of a traditional e-bike; riding along at 15.5mph on something that looks and feels like it should be moving much faster can feel like a poor substitute for an electric motorcycle.

However, the more time you spend with the e-bike, it’ll feel like a comfortable and enjoyable means of getting around. For reasons that will be covered below, it has many limitations when it comes to leisure riding. Indeed, it comes into its own as a practical and stress-free way of travelling around town.

The Eskuta claims to have a ‘walk mode’. Yet in reality, it acts as a starter assist function that boosts you up to 4mph when pulling off from a standing start. You must then continuously turn the pedals, despite encountering no resistance, in order for it to operate; a mandatory requirement for anything that is classed as an e-bike.

That system works brilliantly when you’re travelling solo and happy to move along at 15.5mph. However, it means you have no real ability to pick your own speed. Trying to match the pace of another rider is tricky when your options are 4mph or 15.5mph, with nothing in between.

With regard to the positives, the motorcycle-inspired features contribute to a very comfortable riding experience. The seat is much more cushioned than a traditional saddle, with the tyres, brakes and suspension contributing to the superior handling and performance. The glove box storage, while on the small side, is also a useful addition. And thanks to the minimal effort required to turn the pedals you won’t even break a sweat while carrying a heavy backpack.

Thanks to its design, it also feels much safer out on the road over a regular push bike. Drivers on the road will mistake the Eskuta for a moped and will naturally give you more room on the road. Furthermore, the LED lights, indicators, mirrors and horn provided added confidence when out and about.

Turning to the negatives, the weight and build of the bike means that the lack of a conventional walk mode is an issue when pushing the bike for any significant distance. It also causes the bike to be very slow when freewheeling down a steep hill compared to a standard pushbike.

In addition, it’s hard to fully trust the battery gauge; at times in our tests, it would show 100% for a vast portion of the trip, then begin to jump all over the place. One should still attain around 50 miles, but it’s something we’d like to see improved in future iterations of the bike.

The Eskuta is one of the more interesting e-bikes to come to market and will appeal to a particular type of individual – those that don’t want the cost and hassle of licensing, taxing and attaining a CBT or motorbike license of a regular moped but still want something that allows them to get around town on two wheels. However, consumers who want a traditional e-bike or electric moped will want to look elsewhere, as the SX-250’s limited top speed and unconventional seat design aren’t for everyone. 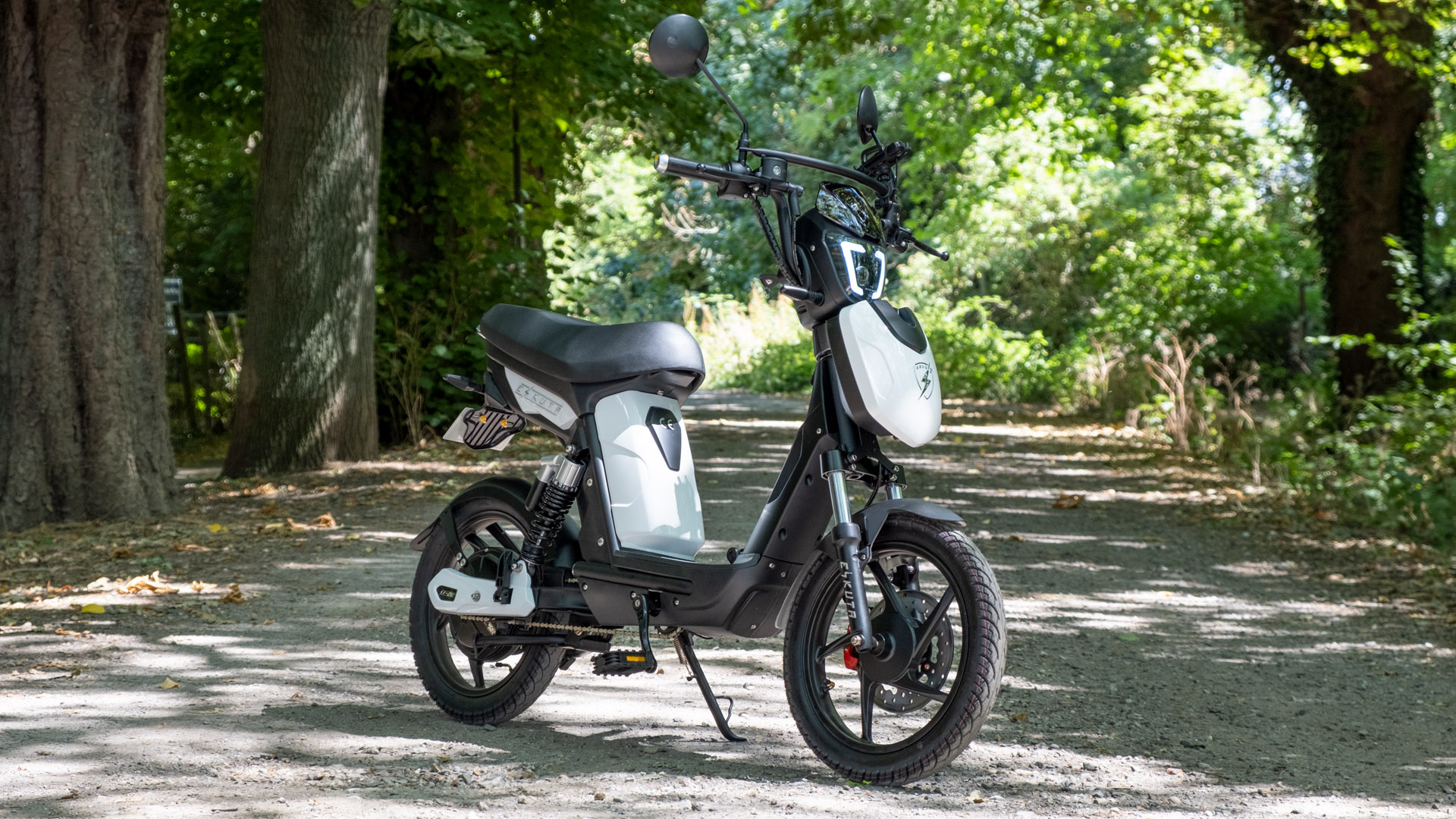 Still, it’s a worthwhile consideration if you’re happy for something in-between. There’s a reason it has proved popular with delivery drivers and young teens. As well as with members of the older generation who simply want a stylish and convenient mode of transport.

Other options from Eskuta: The KS-450

In addition to the SX-250 Series III, Eskuta also manufactures the KS-450 e-scooter. In the UK and at the time of writing, it can only be ridden on private land. That may soon change though with government legislation, which would allow electric scooters to be ridden on public roads.

If that happens, the KS-450 is another good option to consider for micro-mobility. At £469, it’s well priced against its competitors and has an impressive 30-mile range. It’s got a clever folding mechanism that makes it easy to carry on short distances, but at 12.5 kg it’s a little on the heavy side.