The Audi A8 L TFSIe is a luxury hybrid saloon that starts from an eye-watering £84,195. Despite its high price tag, it’s among the best luxurious plug-in hybrids on the market, but how does its audio system perform?

As standard, the Audi A8 L TFSIe comes with Audi’s stock audio package, which is comprised of 10 speakers that run on a 6-channel amplifier; combined these output 180 Watts of power. If you want to bolster the car’s audio system, you’ll have to opt for the Comfort and Sound Pack that’ll set you back £1,995; this also includes ‘360° Camera with Top View’, ‘Park Assist with Parking Aid Plus’ and ‘Multi-coloured Extended LED Interior Lighting Pack’.

In terms of audio, the pack comes with Bang & Olufsen’s premium system with ‘3D sound’. The B&O system adds seven speakers to the cabin, which takes the tally up to 17, which are backed with a 16-channel amplifier. The biggest addition to the line-up comes in the form of a subwoofer, which takes total output to a staggering 730 Watts. On review, is Bang & Olufsen’s audio system. 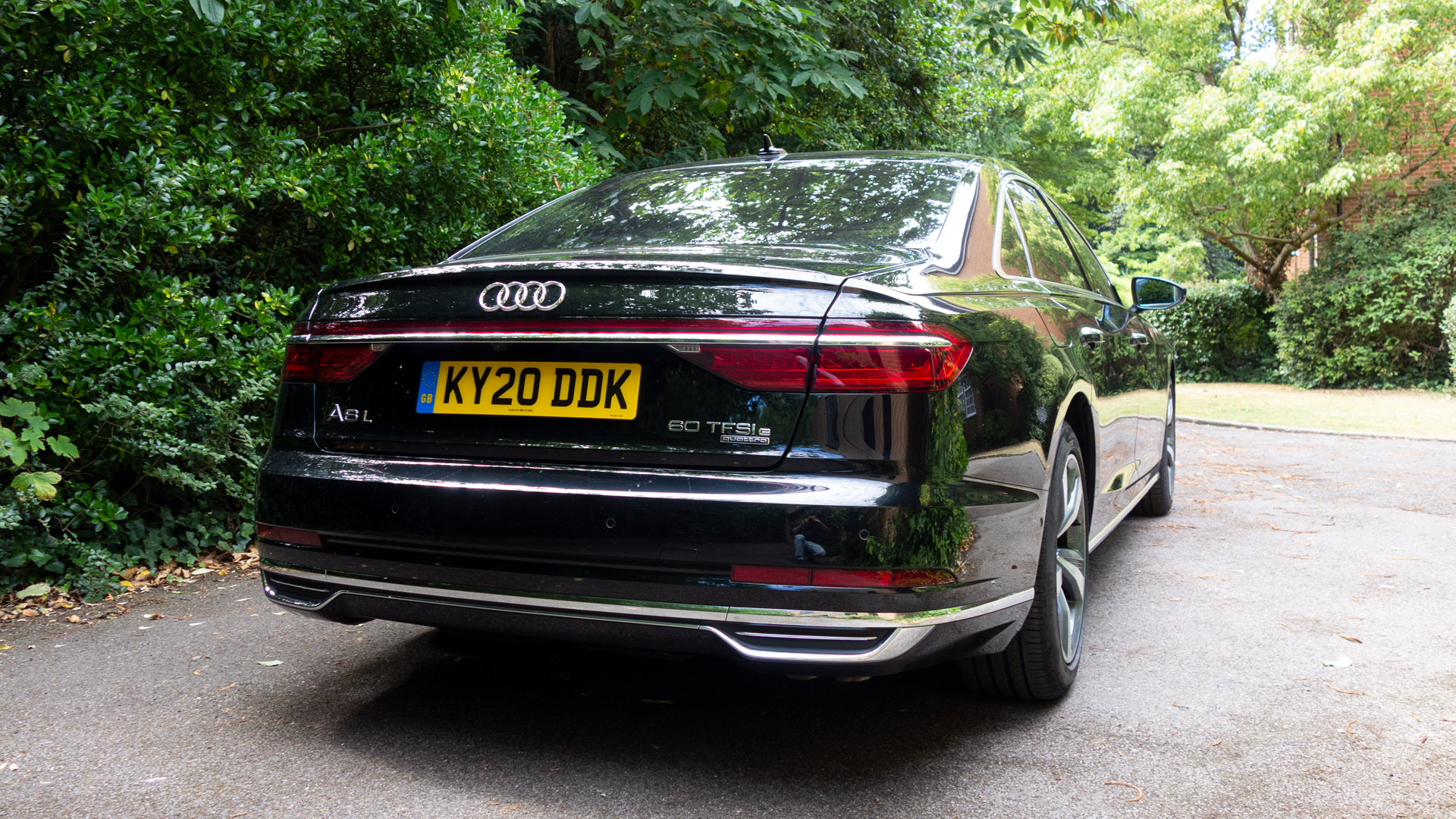 For a demo of the Audi A8’s audio system watch the review on our YouTube channel.

To have access to the car’s audio settings, one must navigate through the menus of the infotainment system. It’s simple enough to find, whereby the 10.1″ touchscreen display makes it a breeze to filter through Audi’s menu system.

Within the sound menu, you can adjust the treble, bass, subwoofer, surround level, focus, 3D sound, the speed dependent volume control and the balance & fader, too. Here are our optimal settings:

The lack of a dedicated mid-range and high-frequency setting is somewhat of an oversight by Audi/B&O. Instead, the Treble adjustment changes both the highs and mids of the A8’s audio system.

As for connectivity, Audi offers both Android Auto and Apple CarPlay, which will be the best means of playback via USB. Alternatively, you can connect to the car wirelessly over Bluetooth (limited to the SBC codec, only) or insert an SD card for media playback through the port found within the centre console storage compartment.

For a demo of the A8’s audio system watch the review on our YouTube channel.

Once everything is set up, it’s time to put those 17 speakers to the test. Our assessment of B&O’s system is based on the settings listed above, which we will break down per frequency band.

First, comes the system’s ability to reproduce sub-bass tones. The inclusion of a subwoofer really helps the system extend into the lower frequency range. With a few notches added to the subwoofer’s EQ, ‘Champagne Life’ by Ne-Yo has a much-desired low-end rumble that can be heard throughout the song; it’s especially noticeable when sitting in the rear seats. Now, while there is an extension in the lower frequencies, we’d have preferred a deeper, more pronounced low-end rumble.

As for the mid-bass, the A8’s audio system is truly exquisite. With two notches added to the bass’ EQ the B&O system delivers a perfect reproduction. Not only does it have the right amount of quantity but it also has a sublime control throughout the mid-bass frequencies. There’s no wobble or distortion, not even at louder volumes. It’s truly remarkable. 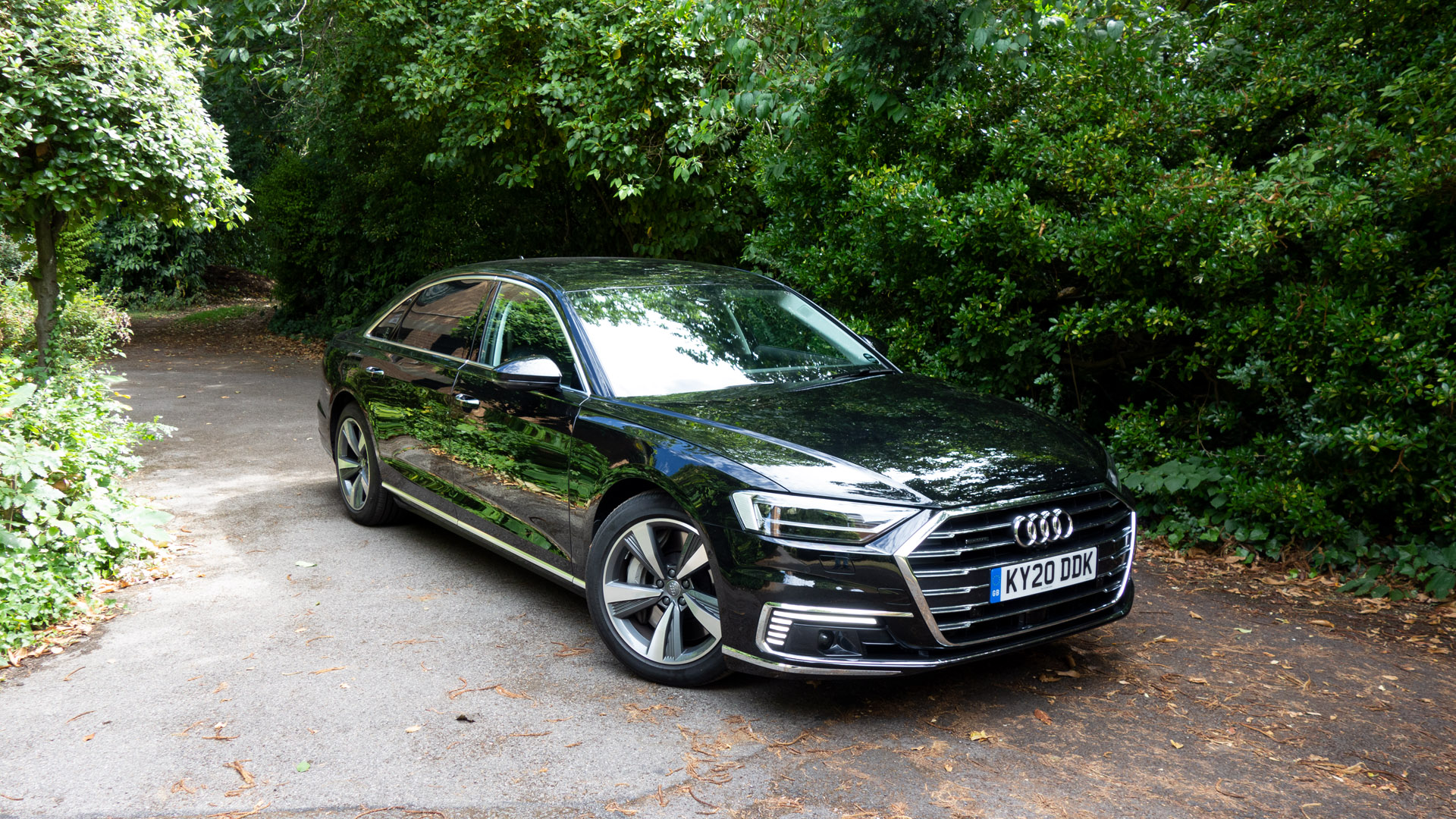 Next comes the system’s ability to reproduce mid-range tones. Unfortunately, unlike the overall bass response, the mids sound recessed. Now, this wouldn’t pose any problems if Audi/B&O had integrated separate EQ settings for the mids and highs, but the two are linked under the ‘Treble’ option.

As a result, any adjustments made here will also add to the highs, which by default, are already a touch sibilant. By lowering the treble’s EQ by two notches, the system becomes bearable at any volume without sounding too rolled off in the high frequencies. Undoubtedly, this has an even greater impact on the mid-range, which gets further pushed back. 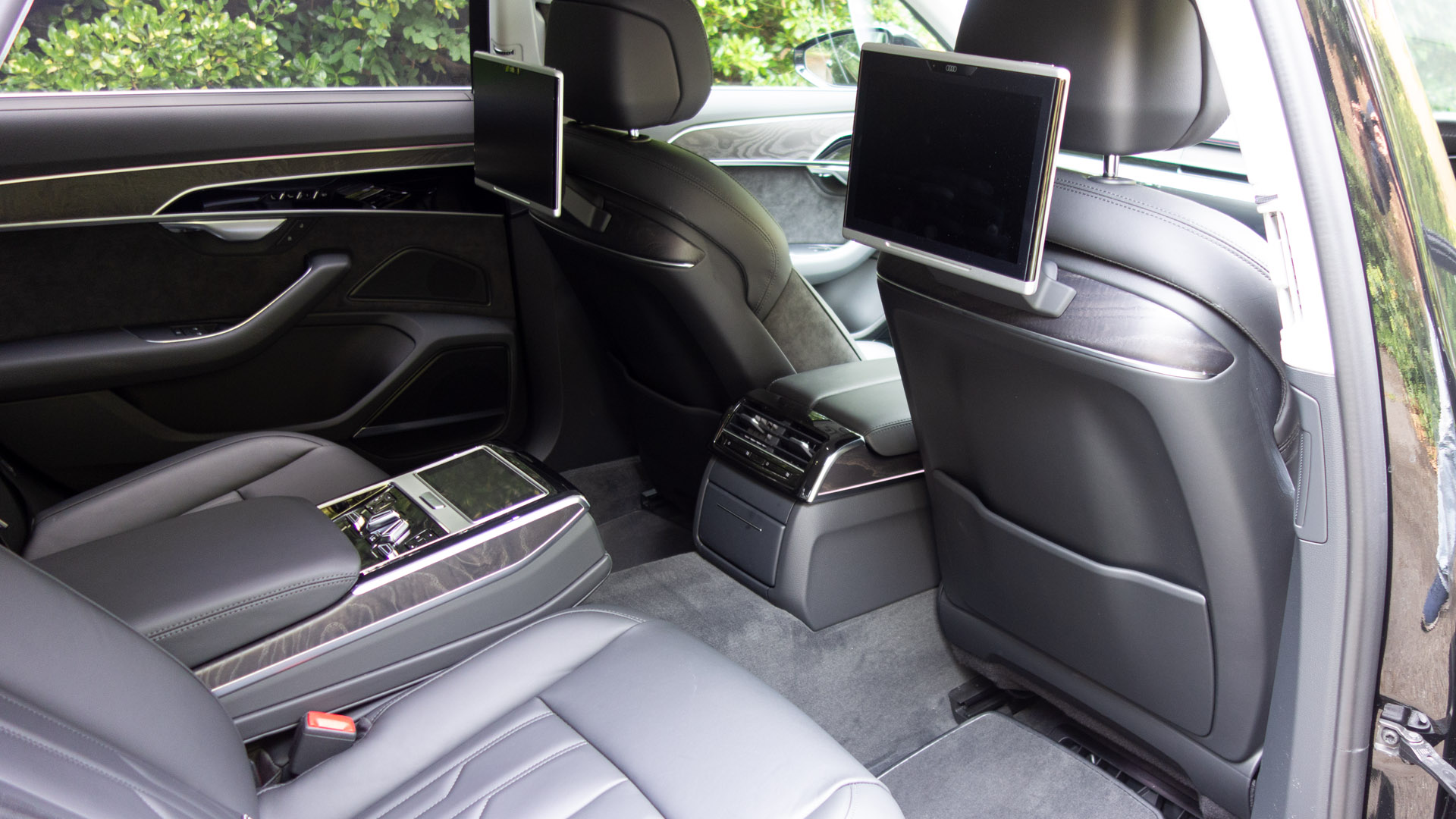 A great showcase of the limited EQ adjustment and how this impacts a song would be to listen to Trey Songz’s 2015 hit, titled ‘About You’; throughout the song, there are strong cymbals that mix with the artist’s voice. Turn up the treble EQ and you’ll find the song is unbearable, especially at louder volumes; dial it down, however, and the song becomes enjoyable, though, a touch less enjoyable with Trey Songz’s voice sounding drowned out.

To round off the overall sound reproduction comes soundstage. Here, B&O has integrated additional full-range loudspeakers in the A-pillars, added mid-range speakers, and implemented Fraunhofer Symphoria technology. The latter is a 3D surround sound post-processing technology that attempts to create a sense of dimensionality and spaciousness by increasing width, depth and even height of the sound image. From our tests, the implementation of a 3D surround sound package is a mixed bag. 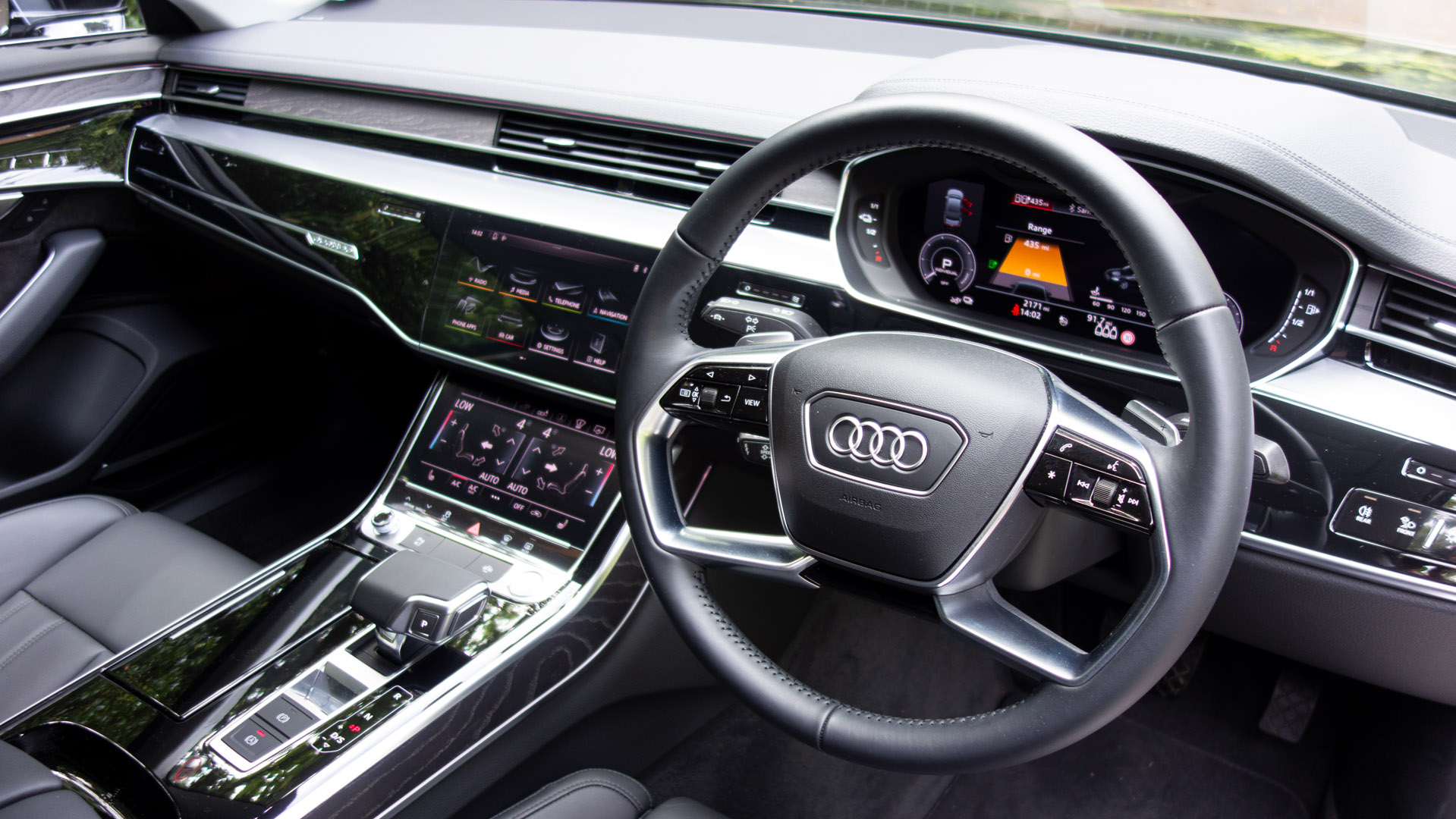 On one hand, the 3D sound setting adds a layer of width and depth, but on the other, it takes away from the already-recessed mids. It’s a catch-22, as the added layer of immersion certainly helps music sound more engaging throughout the cabin. As such, if you can accept the scaled-back nature of the mids, you’ll quite like using the system on its Medium setting – Off, Low and High are options, too.

On the whole, the soundstage isn’t bad, but we’d have liked to have had more openness and better instrument separation. As for the ‘Focus’, we’d recommend leaving this on All, so that everyone in the cabin can enjoy music. However, given the nature of the luxury hybrid, if you’re a chauffeur and not too fussed about listening to music, you’ll want to shift that focus to ‘Rear’, as it’ll result in a better audio experience for the rear occupants. 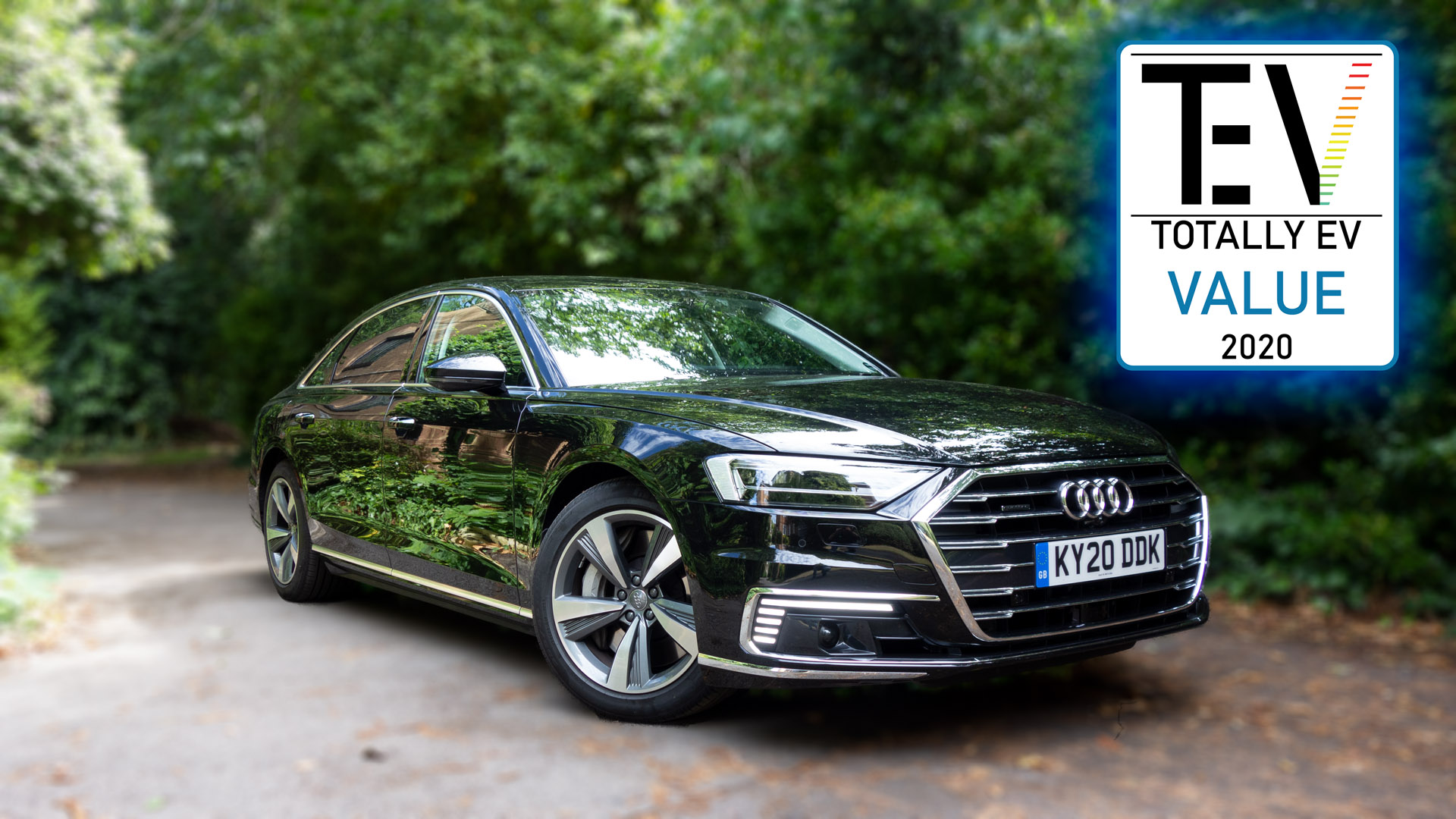 TotallyEV’s verdict on the Audi A8 audio system

While the Audi A8 L TFSIe with the Bang & Olufsen’s premium system isn’t quite perfect, it’s still an incredible bargain given the extent of what you’re getting in the Comfort and Sound Pack. The sound system might not be worth it alone, but with the addition of a better-looking interior, easier parking and better views of your car from the outside, the pack is a no-brainer for those who want to have a better experience in their new luxury plug-in hybrid.

Find the best Audi A8 deals on LeaseLoco

As a result, the B&O system alongside the other goodies that come included with the £1,995 option, receive TotallyEV’s Value award. What do you make of the Audi A8’s audio system? Let us know in the comments or via social media if you’d fork out on the Comfort and Sound Pack; we’re on: YouTube, Instagram, Facebook, Twitter and LinkedIn.