In 2018, Hyundai announced its all-electric SUV, the Kona Electric. Alongside its sibling, the Kia e-Niro, both have proven to be popular among consumers, as they offer style, range and practicality at a competitive price. Since its inception, Hyundai’s compact SUV has undergone a few changes, where the 2021 Facelift spruced up the vehicle’s exterior design while inside the cabin, a few minor tweaks also changed certain operations.

If you’d prefer to watch a review of the Hyundai Kona Electric, head on over to our YouTube channel.

The Kona Electric starts from £28,950, which makes it one of the most affordable all-electric SUVs on the market. It’s available in three trims, SE Connect, Premium and Ultimate – a brief breakdown of what they offer can be found below (click to expand):

We should point out that the SE Connect is solely available with a 39 kWh battery pack, which provides a quoted 180-mile range on the WLTP test cycle. The Premium model, which starts from £30,300, is available in both the smaller and a bigger 64 kWh battery pack that provides the SUV with 300 miles of range – the latter model starts from £35,750. As for the Ultimate trim, which we have on review, it solely comes with the bigger battery pack and starts from £37,900.

From the exterior, the Hyundai looks the part, namely the updated facelift variant, which adds a bit of cohesion around the side of the vehicle over its predecessor. Indeed, the automaker now includes body-coloured wheel arches and sideskirts, as opposed to those garish plastic inserts. Both the front and rear of the vehicle have also received a makeover, whereby there’s a more sleek design language.

You can flick through our pictures to compare both models, with the 2021 Facelift in ‘Dive Blue’ and its predecessor in the ‘Pulse Red Pearl’:

At the front of the cabin, the Kona Electric is quite snazzy looking, though, doesn’t feel as open as its sibling, the Kia e-Niro, which opts for a centre console design that isn’t connected to the dashboard – thus giving the impression of spaciousness.

Nonetheless, the interior design looks futuristic and with the inclusion of physical buttons – including climate controls – it’s still plenty practical. At the centre of the dashboard resides the 10.25″ infotainment system. The screen is bright, fluid and comprehensively laid out. The Kona Electric also supports wired Android Auto and Apple CarPlay, however, much like other vehicles from the Hyundai Group, it’s not fully optimised, whereby only two-thirds of the screen is utilised and a third is left redundant with an Android Auto logo.

Similarly, turn-based navigation data from these mobile operating systems isn’t fed through to the fully digitalised 10.25″ instrument cluster; rival manufacturers offer superior integration. As for the horizontally-shaped driver’s display, its looks can be changed but it still retains the same design.

Should you want to heighten the experience, you’ll find a Head-Up Display (HUD) solely available in the Ultimate trim – here, the small plastic display pops up from the dashboard each time you power on the vehicle. Granted, it’s not as pretty to newer solutions on the market, but it’s still a welcome addition.

In terms of convenience, there’s a singular USB Type-A port found towards the front of the centre console, and in the Premium and Ultimate trims, you’ll also find a wireless phone charger. There’s another USB Type-A port and a 12V socket for a dash cam below the centre console. Alas, there are no USB slots at the rear of the cabin, and as such, you might want to purchase a power bank for your rear occupants.

Elsewhere, there’s a punchy 400-Watt eight-speaker Krell Automotive audio system that comes fitted as standard. If you’d like to hear how it performs, watch our dedicated review of the system on YouTube.

Moving onto storage, the Kona Electric has an abundance of areas at the front of the cabin: the large open area under the centre console, phone storage at the top of the centre console and two cupholders further down. The centre armrest area is large enough for a small-sized purse or wallet.

As for the door bins, they can all accommodate a 500ml bottle, while the front two are a little larger allowing you to transport other valuables. It goes without saying, there’s a glove compartment, too.

On the plus side, the Kona Electric has a hatchback design, 60:40 split-folding rear seats, a flat loading bay and an underfloor compartment for your charging cables.

When it comes to seating comfort, the Hyundai caters for five adults. Both headroom and legroom are limited at the rear of the cabin, where 6-foot 2-inches (188cm) individuals might feel a little henned in – and due to the diagonally-wedged rear seats, it can result in a bit of discomfort on longer excursions.

Thankfully, there’s a near-flat rear footwell design, which means the middle occupants can stretch out their legs. Should you not have to use the seat, an armrest with two cupholders can be revealed.

At the front of the cabin, both headroom and legroom are a non-issue, with the seats being manually-adjustable, too. The Premium trim brings a heated steering wheel and front seats, while the Ultimate trim adds electronically adjustable, heated and ventilated front seats, heated rear outer seats and an electric sunroof. The latter is a much-welcome sight as it brings in additional light within the cabin.

As for cabin noise, the Kona Electric provides a quiet environment, though, you can hear a bit of rattle coming from the door frames and tyre noise creeping in while traversing rougher terrain. It still has better insulation than the Kia e-Niro.

The only downside is that the vehicle operates a front-wheel-drive system, which means if you put your foot down to the metal, you’ll feel the tyres struggling for grip – there’s also some torque steer. While this is fun to experience on a straight road, it can lead to a lack of stability when cornering at speed on country roads – you can see it in action on our YouTube channel, Instagram feed or TikTok page. 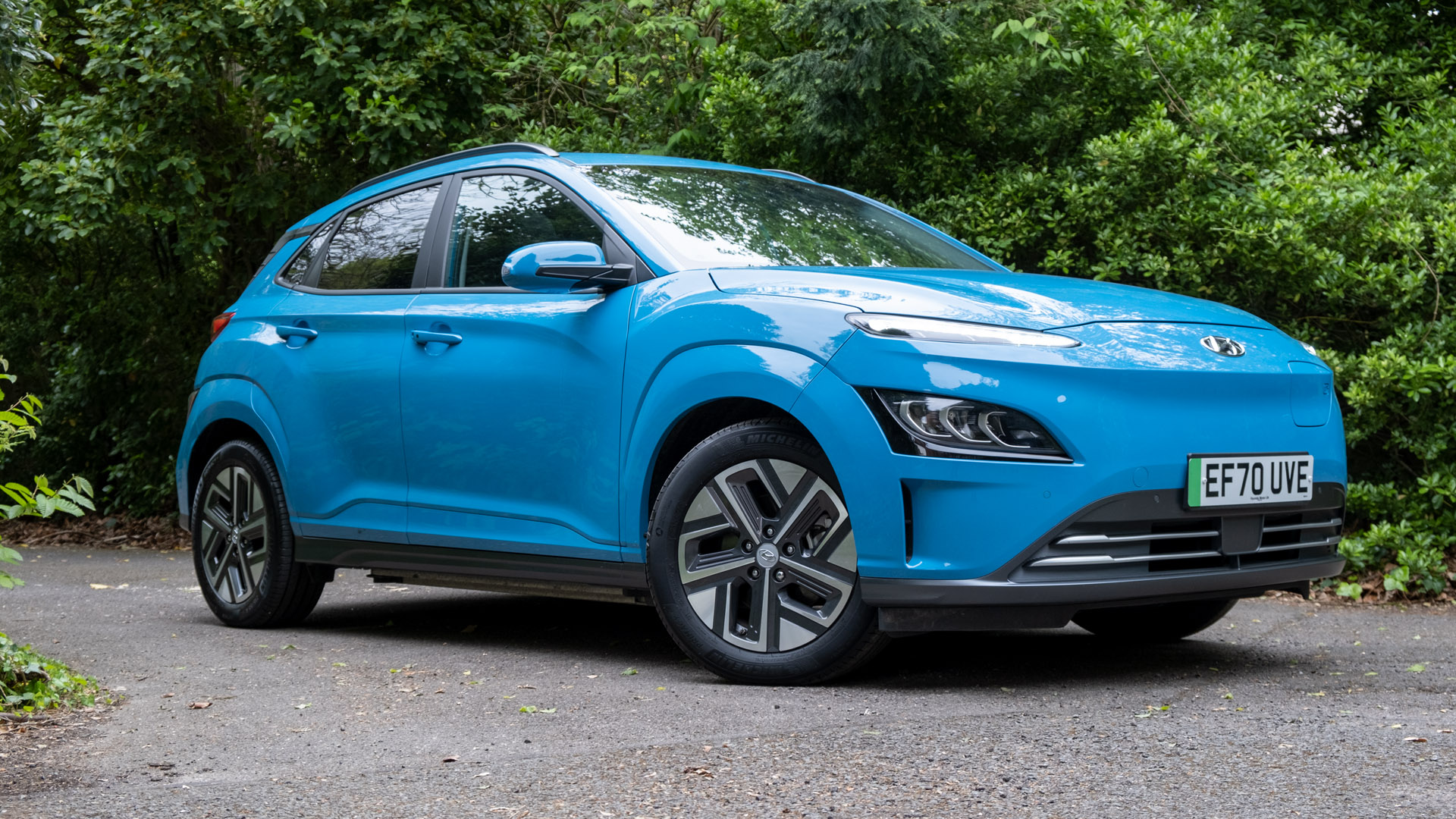 On that note, the Kona Electric’s steering wheel feels a little disjointed from the front axle – it won’t give you the same level of driver’s input as the BMW iX3. As for its suspension system, it’s got a mix of the stiffer MG ZS EV and the softer Kia e-Niro; there’s a bit of body roll when driving around country roads and yet the Hyundai still provides a comfortable experience when pottering around town.

The Kona Electric’s biggest selling point, however, is its electric range. From our mixed driving tests, we netted 240-260 miles in the 64 kWh model. By comparison, the Kia EV6, Audi Q4 e-tron, Kia e-Niro, Kia Soul EV, and the Volkswagen ID.4 all achieve the same figure, while the MG ZS EV, Volvo XC40 Recharge Twin Pro, BMW iX3 and AWD Hyundai Ioniq 5 manage around 230-250 miles. The only electric SUVs to surpass the Kona Electric’s range are the Tesla Model Y and Skoda Enyaq iV 80, which achieved 260-280 miles and 300 miles, respectively.

We should point out that our tested Hyundai had the optional £875 Heat Pump installed – we’d actively recommend having fitted if you live in a country that has a cooler climate, such as the UK; it’s a shame, however, that the automaker now charges for its inclusion as it used to be fitted as standard on the higher-spec Kona Electric trims. 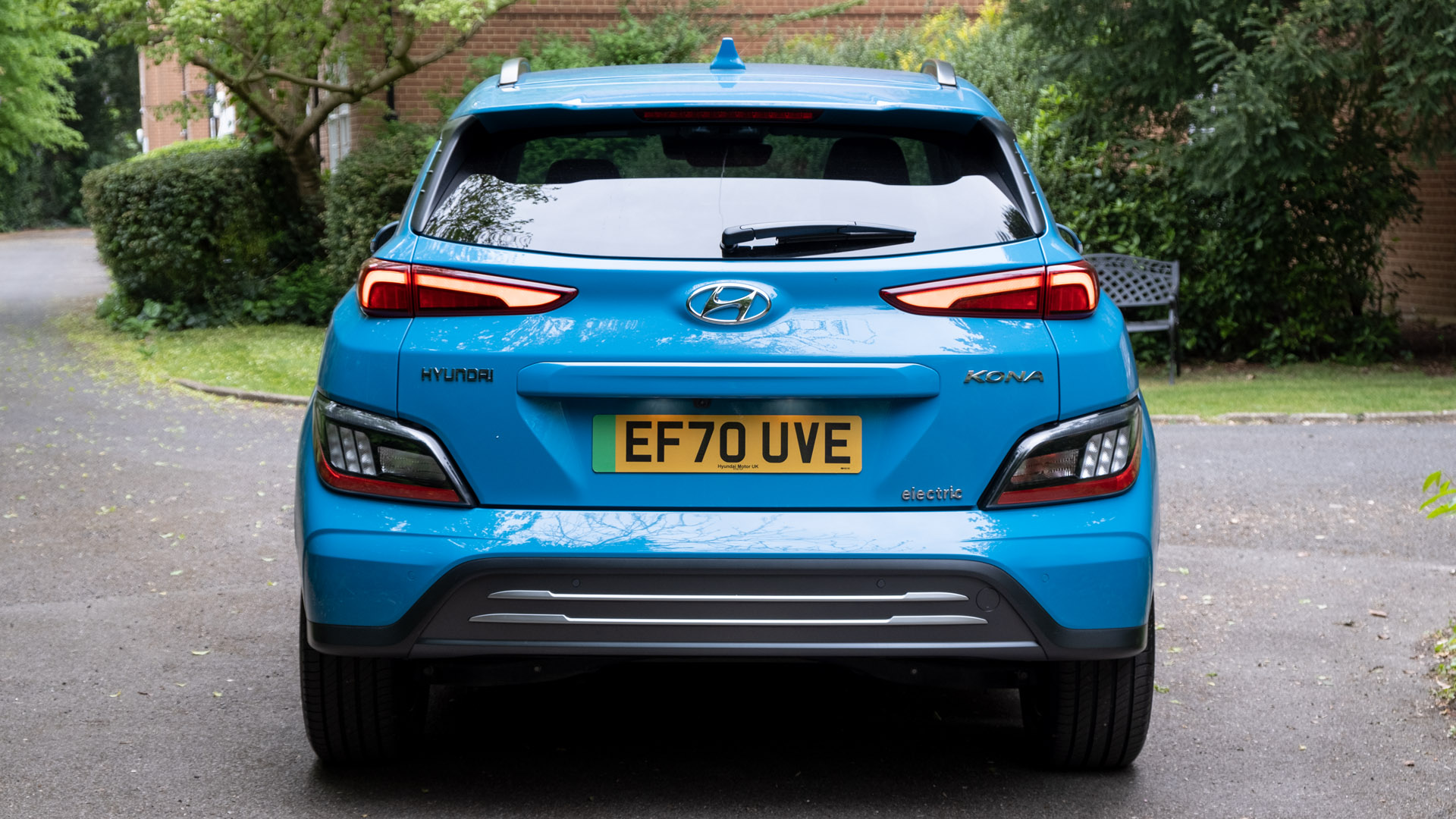 To recoup energy back into the battery pack, there are three levels of regenerative braking: level 1, 2, and 3; these can be adjusted on the fly through the use of the flappy paddles. Surprisingly, Hyundai has removed the ability to store the last-used mode through the infotainment system, and as such, you’ll have to set it manually each time you step inside the cabin. Equally, the vehicle won’t remember the last-used drive mode either.

As for one-pedal driving, you can decelerate the vehicle rapidly through the harshest regenerative braking mode (level 3), but should you wish to come to a complete standstill, you’ll need to hold the left flappy paddle – Hyundai has coined this as “One-Paddle Driving”. Frankly, it’s cumbersome to frequent and isn’t as intuitive as i-Pedal mode which is present in the newer Hyundai Ioniq 5 and Kia EV6, whereby these vehicles don’t require you to rely on the physical brake pedal nor the flappy paddles.

In terms of safety, the non-electric Kona received 5/5 stars in Euro NCAP’s 2017 tests – these results were validated on the 2021 Facelift model; one can imagine the similarly-built Kona Electric should also achieve top marks.

While we can’t certify its crash safety, we can testify of using its driver assistance systems. As standard, there’s: Forward Collision Avoidance Assist with Pedestrian and Cycle Detection, Forward Collision Warning (FCW), Lane Follow Assist (LFA), Lane Keep Assist (LKA), and Adaptive Cruise Control (ACC) with Stop and Go functionalities. The latter keeps you at a safe distance from the leading vehicle and takes the stress away from slow-moving motorway commutes.

Finally, on to visibility, it’s excellent around the cabin and with the inclusion of rear parking sensors and a rearview camera, it’s less stressful to do a complex parking manoeuvre. Note, the Premium and Ultimate trims also add front parking sensors. 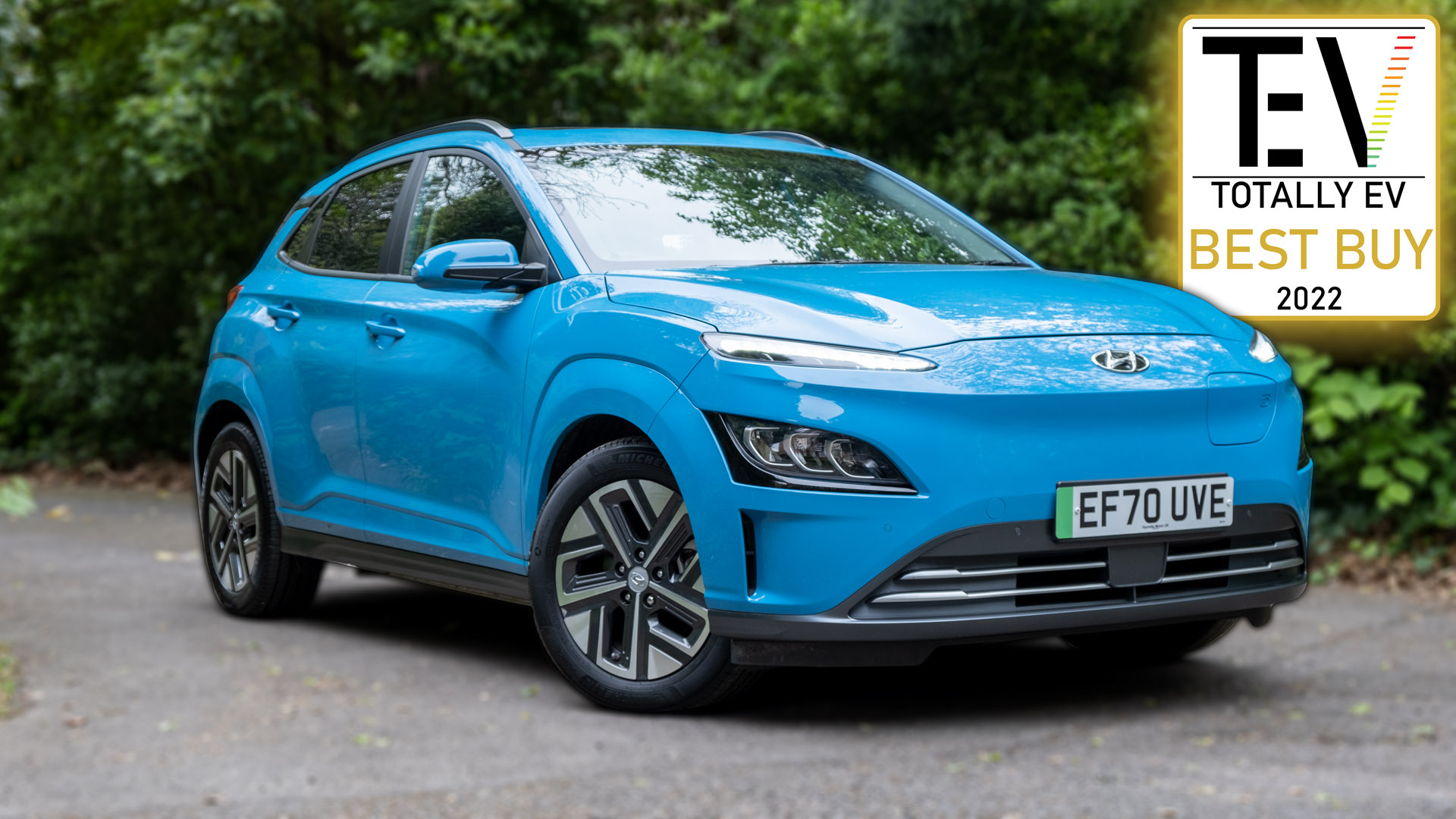 On the whole, the Hyundai Kona Electric is still an excellent electric vehicle and makes for a great alternative to the Kia e-Niro. As such, the compact SUV receives TotallyEV’s Best Buy award.