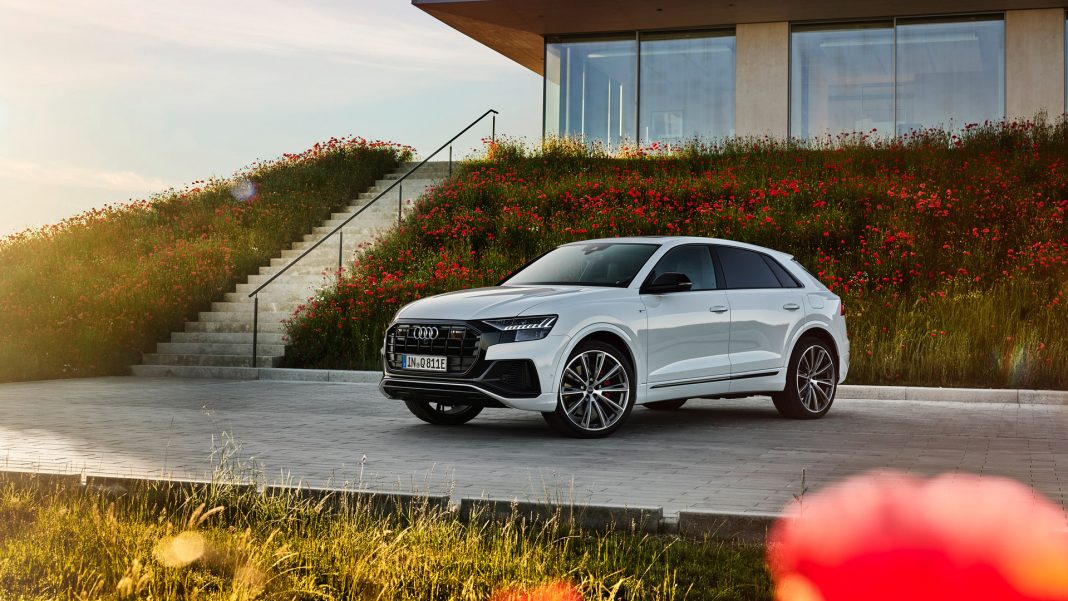 Regarding this launch, Andrew Doyle, Director of Audi UK enthuses “Luxury travel is obviously something to be savoured, but for an ever increasing number of drivers it can only be enjoyed with due consideration and respect for the environment…Cruising on air suspension in the upscale surroundings of the new Q8 TFSI e accompanied only by the distant purr of its electric motor is a true golden moment, but also a green one that can be enjoyed for the entire duration of many commutes, eliminating exhaust emissions from numerous journeys. Factor in the V6 engine providing the luxury of abundant power and the convenience of a far-reaching driving range in hybrid mode and you have an SUV that really appeals on every level.”

These exciting new models combine an electric motor and high levels of V6 TFSI power, ensuring they can achieve up to 28 miles of travel with electric power, thus producing zero local emissions.

The conduit for the highly compact electric motor has a 100kW output and sits along with the 3-litre engine. There’s an eight-speed Tiptronic transmission, too. Furthermore, there is a EU6 AP-compliant petrol engine that can produce 335 hp (250 kW), which delivers up to 450 Nm of torque. 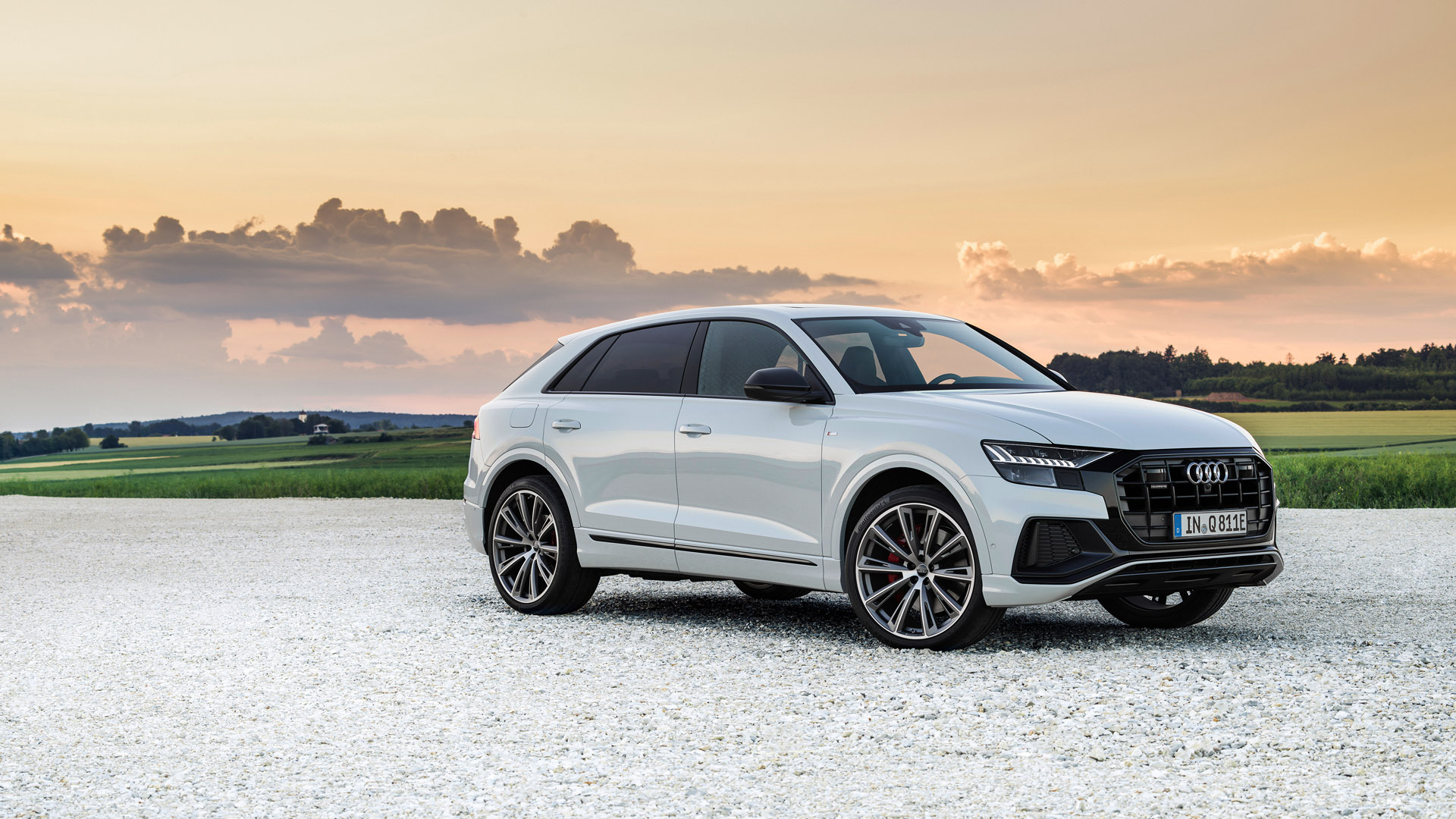 Even when the V6 petrol engine is not activated, an electric oil pump continues to provide a supply. Power is provided to the quattro permanent all-wheel drive system that incorporates a centre differential, employing solely mechanical regulation and enabling distribution of 60% of the torque to the rear axle and 40% to the front, when standard operating conditions are employed. A larger proportion of this power can be distributed to the axle that has better traction if required, with up to 70% being possible for the rear and up to 85% to the front.

Continuing underneath the vehicle, beneath the luggage compartment, a lithium-ion battery pack is found, where it includes 104 of the latest generation pouch cells in a 13-module formation. Each cell has an electrical capacity of 48 Ah and is made with a flexible outer layer. The battery system itself has an energy capacity of 17.8 kWh.

A key supportive element for the performance of this battery and energy capacity is liquid cooling, additionally creating its own low-temperature circuit. It is possible to connect this to the air conditioning system’s coolant circuit, if required, or it can be linked with the second low-temperature circuit which has the ability for temperature control of the power electronics. The direct current from the battery is converted into a three-phase current that is then able to fuel the electric motor and in the recuperation stage, direct current is then returned to the battery.

Two output levels are offered by Audi for the SUV Coupé. Each option can travel for up to 28 miles, powered exclusively by its electric motor, in accordance with the WLTP measurement procedure, along with an ability to climb to speeds of up to 83mph without the requirement of the combustion engine. 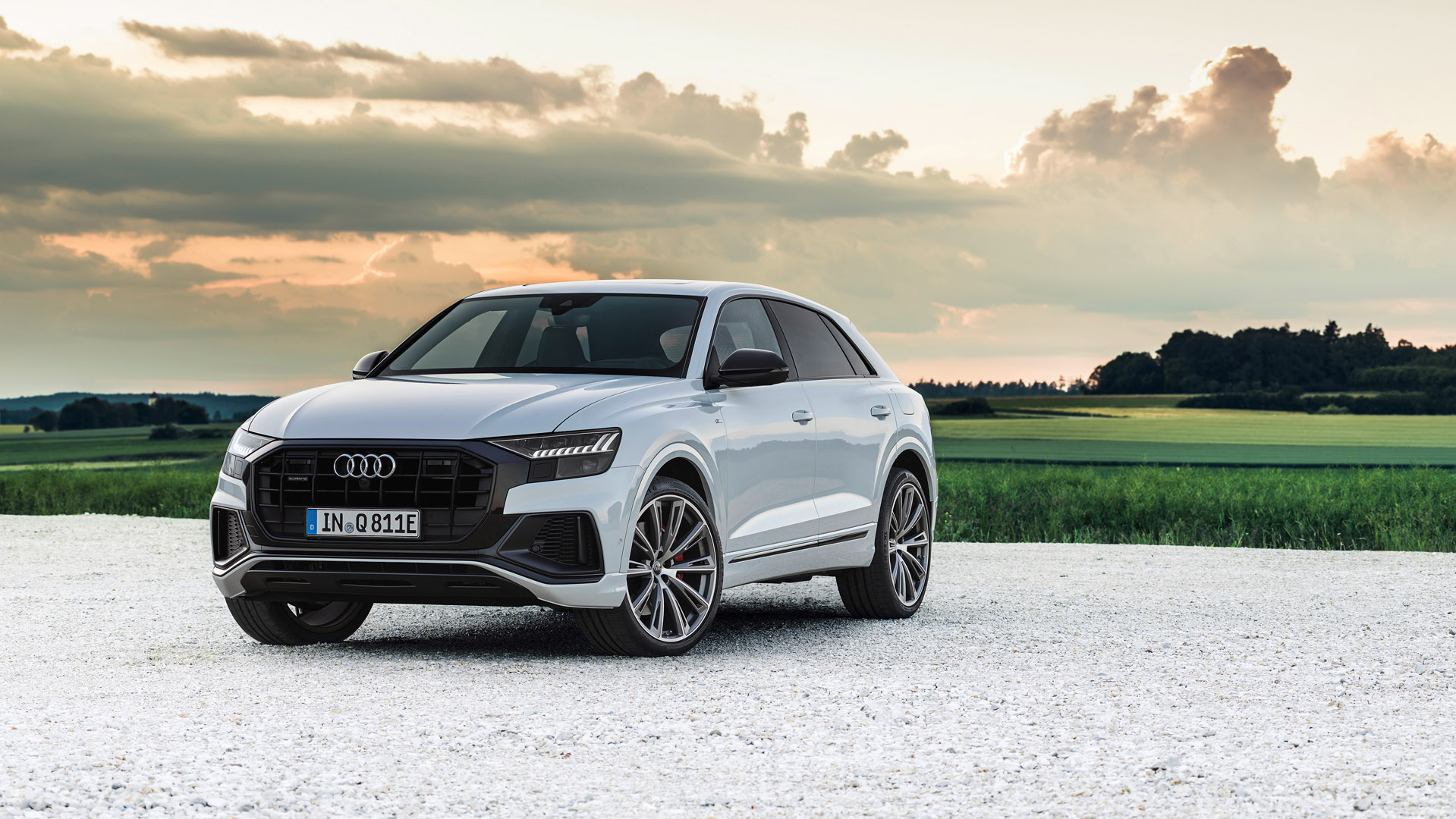 In these new models, power sits hand in hand with technology to improve the driving experience. For example, the hybrid management system in the Q8 TFSI e quattro models automatically decides the best operating strategy for each journey the vehicle takes. The SUV Coupé will initially start in a totally electric “EV” mode. It will produce the legally prescribed warning sound or Acoustic Vehicle Alerting System when travelling at reduced speeds, through loudspeakers within the right front wheel arches, to ensure other road users are alerted. It is only when the accelerator pedal is pressed further than a specified resistance level that the petrol engine in the model is then activated. 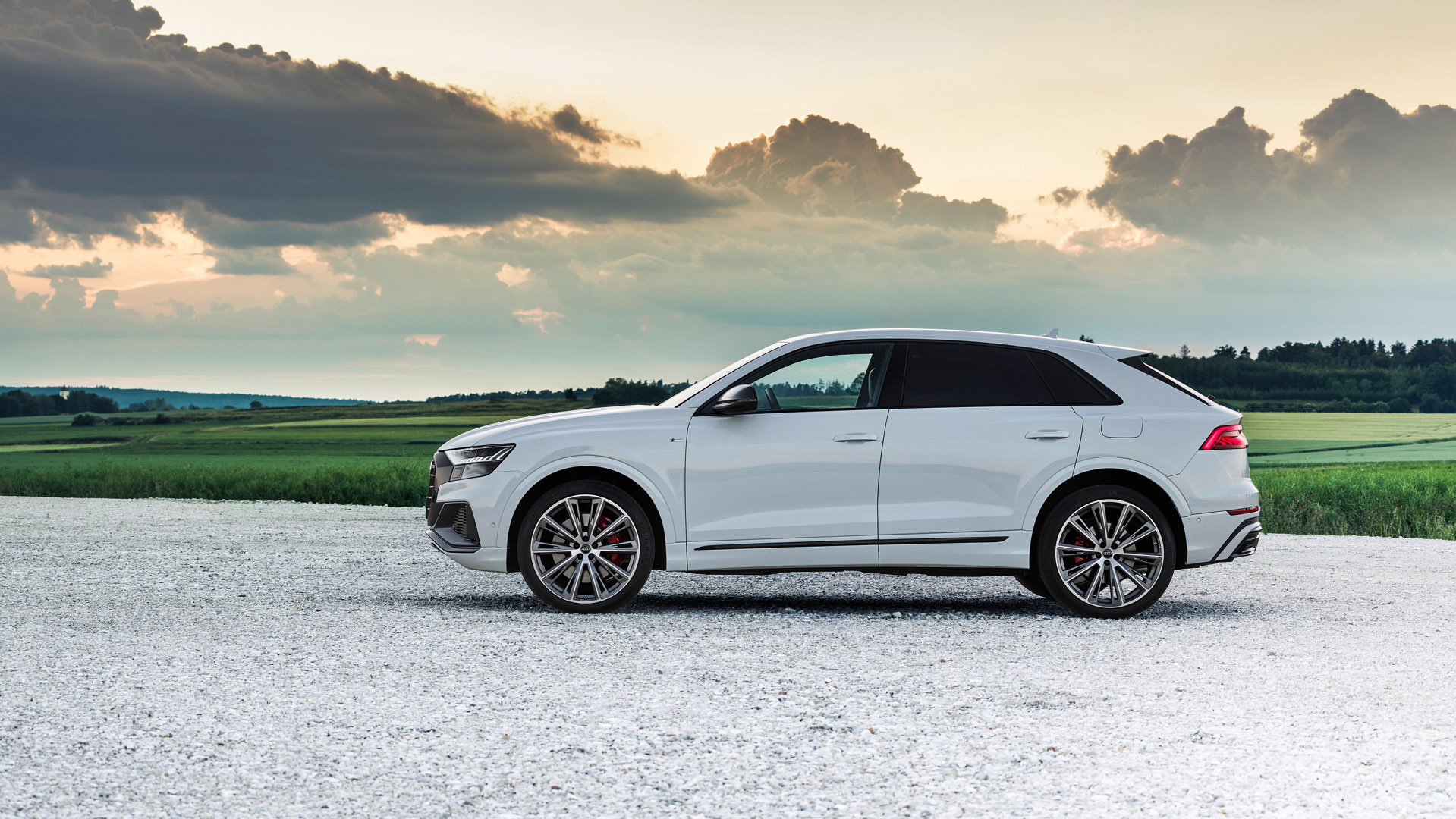 However, the aforementioned ‘hybrid’ mode, which forms the main operating system of the Audi Q8 TFSI e quattro, consists of three modes; ‘Auto’, ‘Hold’ and ‘Charge’. The ‘Auto’ mode enables the automatic selection of the ideal type of drive with the TFSI engine for higher speeds, fully electric control for reduced speeds, or indeed combined efforts of both. ‘Hold’ mode, strives for a different result with the retention of the existing level of charge within the battery for use later as required. Finally, ‘Charge’ mode, perhaps predictably, looks to charge the battery as much as able during driving; often a particularly useful option if a route is to be completed within an urban area, where the last distance can be managed solely with electric power.

An ‘EV’ mode can additionally be chosen within the centralised MMI display, allowing electric power to have top priority.

The MMI provides details from the surrounding environment which continue to be considered even if navigation is not activated. In the standard MMI navigation plus, the predictive operating strategy is activated on the initiation of route guidance and is employed to calculate where in the driving route the charge of the battery can be utilised with maximum efficiency and intelligence. This strategy can also charge the battery when the engine is running with greater efficiency, to enable the accessibility of electric power in operating phases with higher levels of demand such as traffic jams or traffic within cities. A continually updated long-distance plan of the journey is additionally created via the high level of data that is employed, with the incorporation of environmental, online traffic and navigation data.

A further key element worth noting in the plug-in hybrid Q8 models is the predictive efficiency assist. With this feature, when the accelerator pedal is released, it determines if the vehicle deactivates the TFSI engine and begins freewheeling or “coasting”, where up to 25 kW of power can be gained back, or if it regains battery energy by decelerating with the electric motor. This electric motor performs most of the brake applications in daily driving, including all those up to 0.3 g. It is only if heavier braking is needed that the hydraulic wheel brakes will be employed almost unnoticeable. An impressive figure of up to 80 kW of power can be regained by the Audi Q8 TFSI e quattro during braking. 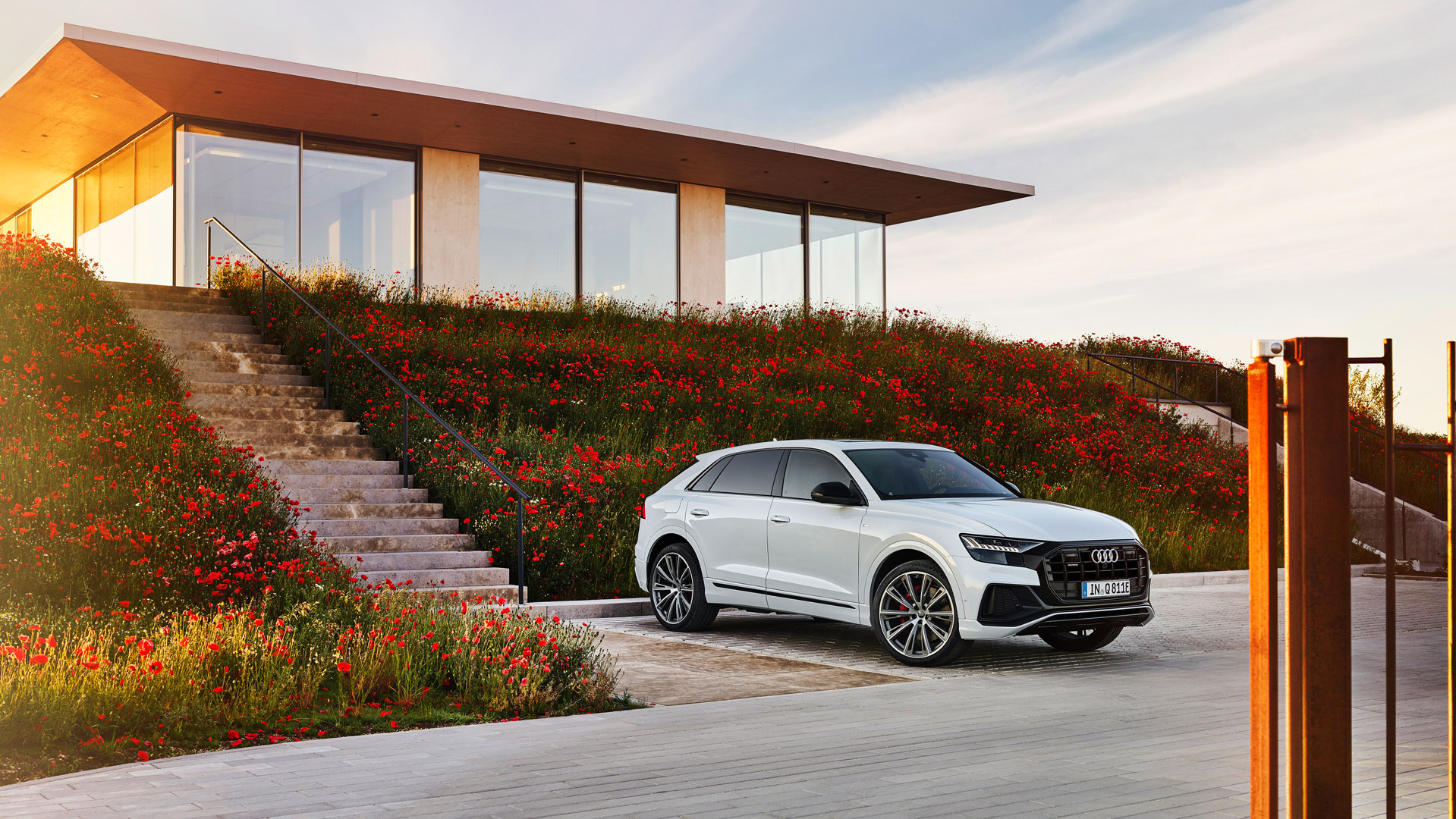 An additional feature that can assist with accelerating, steering and braking over long distance, within current legally permissible limits, is the adaptive cruise assist system. This feature comes as standard in Vorsprung models or optional within the Tour Pack and is just one highlight within the array of driver assistance systems employed by the Q8 TFSI e quattro models. When activated, this feature allows the predictive efficiency assist to support during both acceleration and deceleration.

Furthermore, when this feature is turned off, a pulse is sent through the accelerator pedal to encourage deceleration where this would improve efficiency, as well as issuing alerts through the Audi virtual cockpit and head-up display – another standardised feature in the Vorsprung models. A recent vehicle safety test that focussed on level 2 systems of this format, by Europe’s NCAP consortium, demonstrated a top score by the Q8 for this feature.

Yet, the impressive selection of technology on offer in these models does not end there, with another exciting aspect in the driving experience of the Audi Q8 TFSI e quattro being the Audi drive select system. Within this, seven driving profiles are available; dynamic, comfort, auto, efficiency, offroad, allroad and individual. These enable personalised tailoring of the characteristics of components including the Tiptronic transmission, power steering, the 3.0 TFSI and the air suspension. The manner in which the powertrain reacts is also altered depending on which setting is employed. An example of this is through the activation of the dynamic profile and S mode of the Tiptronic transmission; the TFSI engine and electric motor combine to produce an extra powerful boost with acceleration. It also causes freewheeling to be unavailable when decelerating, enabling the continuous recuperation of energy for the electric motor. 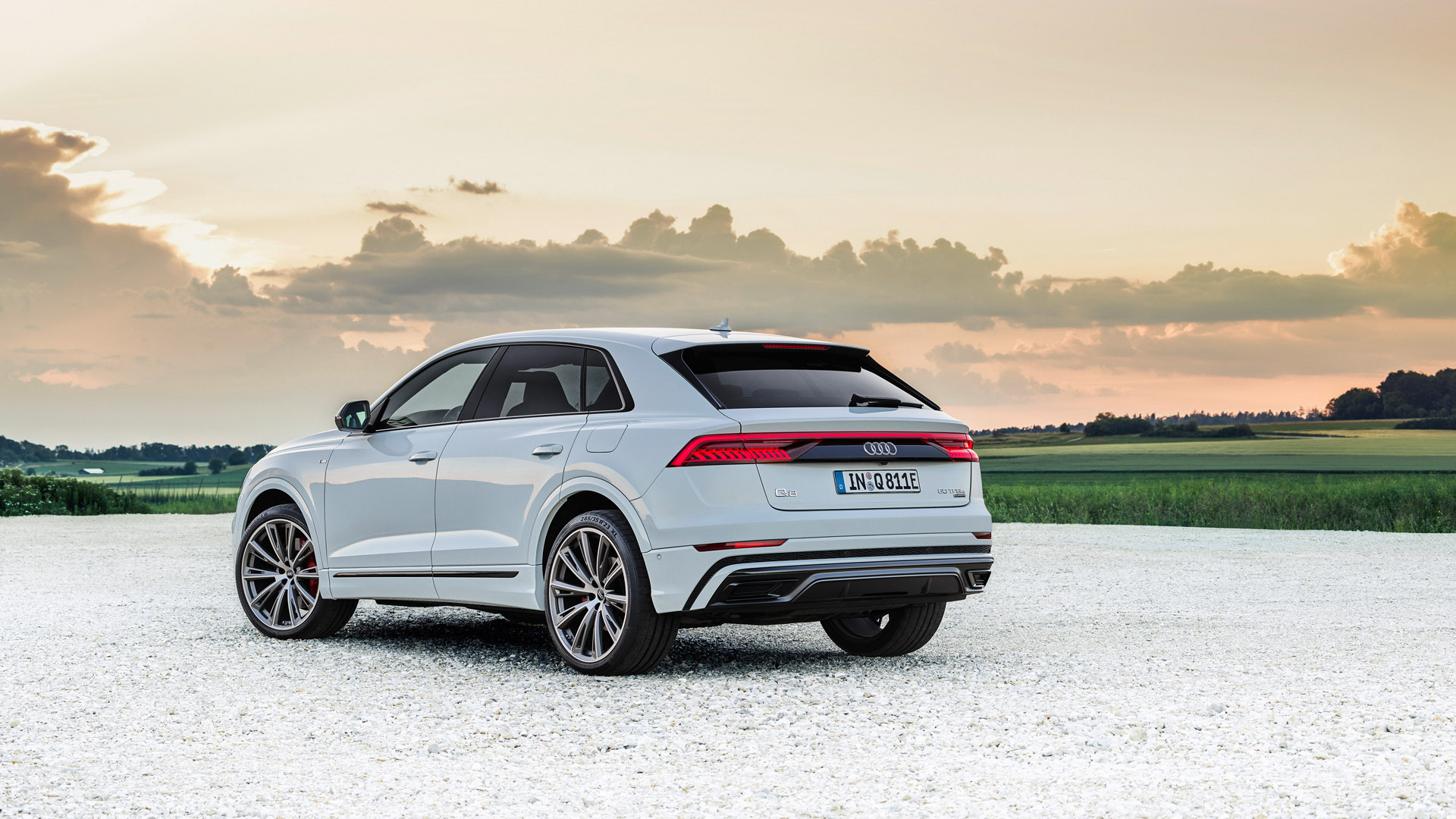 To support ease of use of the new vehicles, charging cables are included with the Q8 TFSI e quattro models that allow both household charging with three-pin plugs along with AC wallboxes, as well as at public charging points. The battery can gain full charge, from empty, in approximately two and a half hours, with a maximum charging capacity of up to 7.4kW.

Moreover, the helpful myAudi app also allows the driver to check the battery, range status, view data regarding charging and consumption, program the charging timer and commence the charging processes. It can additionally be used to activate steering wheel and seat heating, if such features are fitted and adjust the cabin temperature to the chosen level prior to a journey. The app also supports charging at public points by identifying charging locations within a specified route and noting which of those are accessible to an individual with an e-tron charging service charge card. This card is valid at multiple stations that are operated by 18 UK suppliers and provides monthly one invoice billing, in conjunction with one tap charging.

In keeping with its impressive levels of power and technology, the equipment within the Q8 is fitting of its high status within the Audi Q range and includes luxuries such as HD Matrix LED lighting, supple valcona leather upholstery and adaptive air suspension. 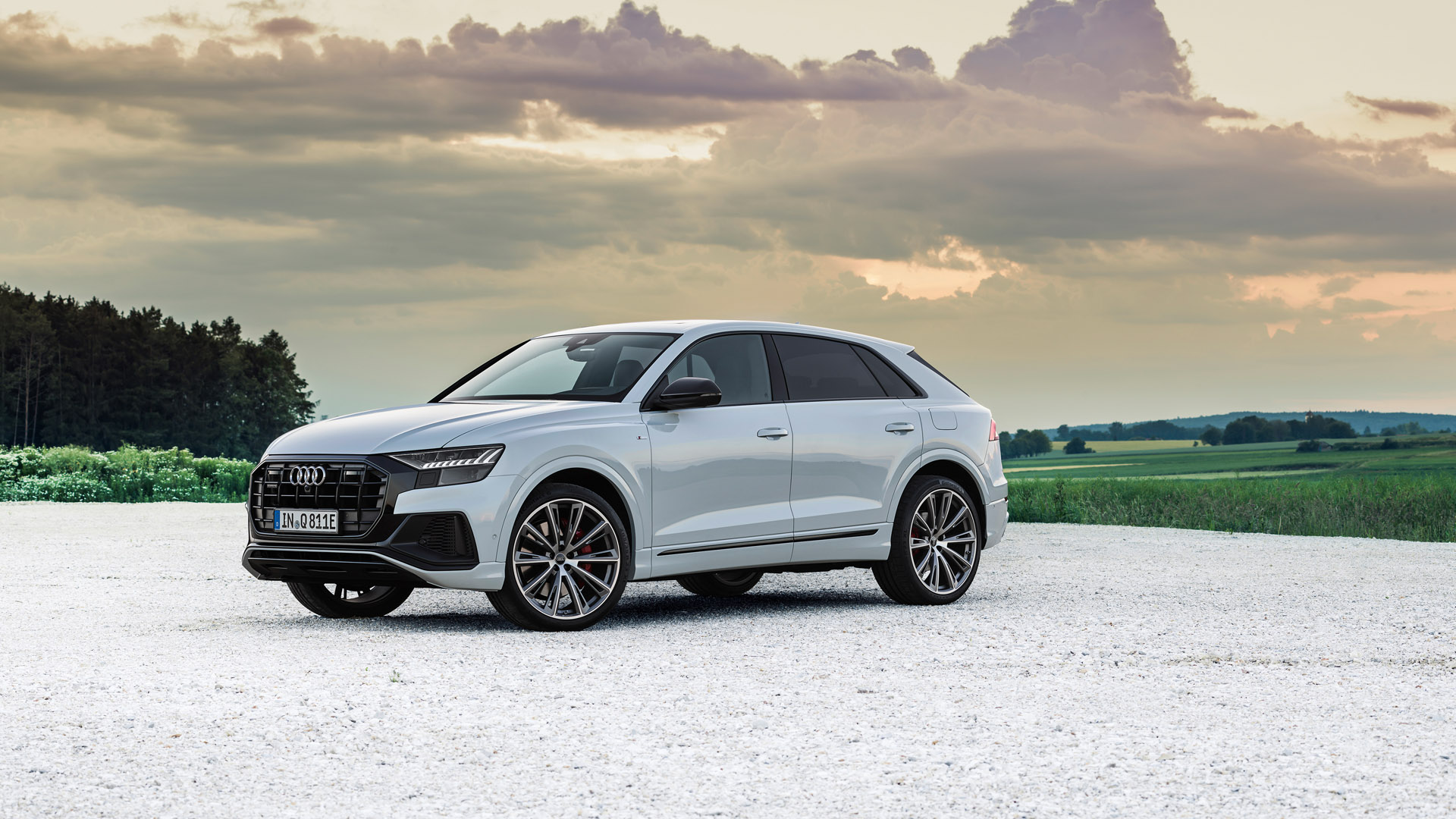 For a more hands-free approach, advanced natural language voice control is available, allowing commands to be verbally given. The requests are then processed with information either already on board or gained from the cloud. MMI navigation plus with MMI Touch additionally comes as standard and includes the Audi Virtual Cockpit with a Wi-Fi hotspot, 12.3-inch display and the Audi connect portfolio which enables access to a vast range of features such as Google Earth mapping, hybrid radio and online traffic information. Further technology included is the Audi Phone Box and Audi Smartphone Interface which allow connection to and inductive charging of handsets.

Finally, if, even after all of these features are considered, a higher level of luxury is still sought, the Competition 60 TFSI e quattro Vorsprung model provides just this, incorporating black styling detailing that particularly shows off the model’s idyllic body and S line sculpting. Furthermore, the luxury extends through the powered soft-close doors into the interior where an Alcantara headlining, Bang & Olufsen audio, sport seats with massage feature and an extended leather pack can all be found. Indeed, technology is certainly not in short supply here with a head-up display and nearly every driver assistance aid featured within the Q8 range.