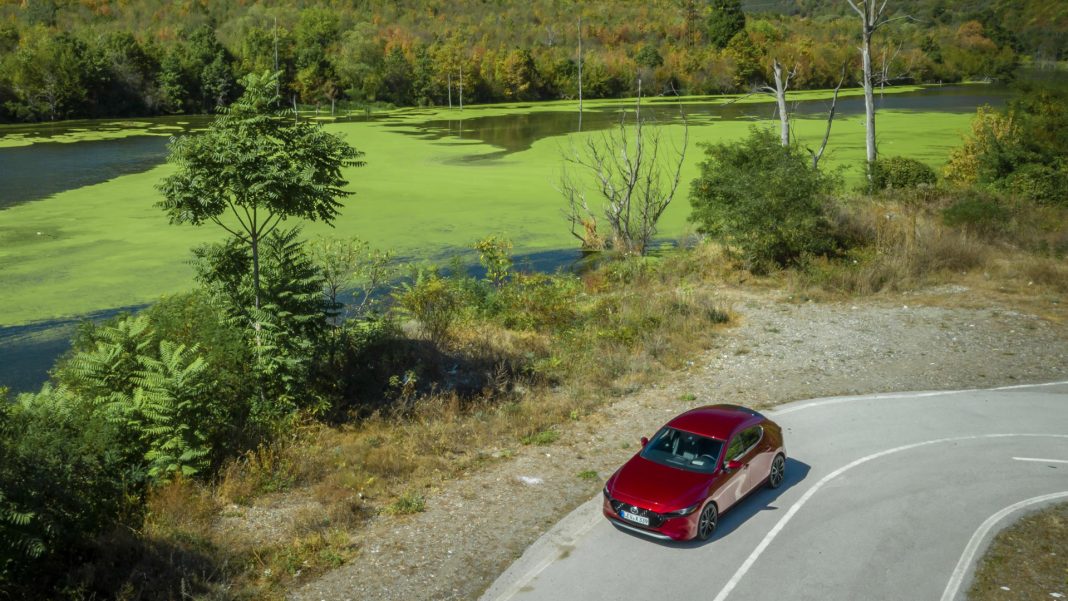 Mazda is currently involved in joint research projects and studies as part of an ongoing industry-academia-government collaboration to promote the wide-spread adoption of biofuels from microalgae growth.

Expecting that internal combustion engines combined with some form of electrification will still account for some 95% of the vehicles it produces in 2030, and that liquid fuel will remain dominant in the automotive industry until at least 2040, Mazda considers a renewable liquid fuel essential to drastic CO2 reduction.

Because, when burnt, algae biofuel only releases CO2 recently removed from the atmosphere via photosynthesis as the algae grew, Mazda considers its development to be critical to achieving the carbon-neutrality of cars powered by the internal combustion engine.

Microalgae biofuel has numerous positive attributes as a renewable liquid fuel. Algae fuels can be farmed on land unsuitable for agriculture, can be grown with minimal impact on freshwater resources, can be produced using saline and wastewater, have a high flash point, and are biodegradable and relatively harmless to the environment if spilled.

Improving productivity and reducing costs are fundamental to the widespread future availability of algae biofuels. To that end, Mazda is lending research-accelerating technical support to the combination of research into genome editing by Hiroshima University and plant physiology by the Tokyo Institute of Technology which is intended to lead to a breakthrough in these areas.

As part of the ‘Well-to-Wheel’ initiative, Mazda has developed a multi-solution approach to reduce overall carbon dioxide emissions without any compromise to driving pleasure and performance to its vehicles. Ingenious Skyactiv technologies such as i-STOP, Cylinder Deactivation and Mazda M Hybrid 24V mild-hybrid system are fitted as standard on selected models across the range, while the Mazda3 and CX-30 are offered with Mazda’s revolutionary 2.0-litre 180ps Skyactiv-X Spark Controlled Compression Ignition (SPCCI) petrol engine.

The company will introduce EVs as the optimum environmentally-friendly solution to regions that generate electricity from clean energy sources or restrict certain vehicle types to reduce air pollution. Due to arrive in the UK early next year, the new all-electric Mazda MX-30 First Edition features an AC synchronous electric motor and a 35.5kWh lithium-ion battery that allows for rapid charging up to 50Kw.

With its unique freestyle doors, ecological materials and right-sized battery giving a range of approximately 125 miles, exceeding the 30-mile average daily drive of the European customer, the Mazda MX-30 marks another positive step in Mazda’s multi-solution approach to reducing emissions following the recent arrival of the innovative Skyactiv-X engine.

London congestion charge rises to £15 plus applies at evenings and...