TotallyEV
Features What is an EV? Everything you need to know about hybrid and... 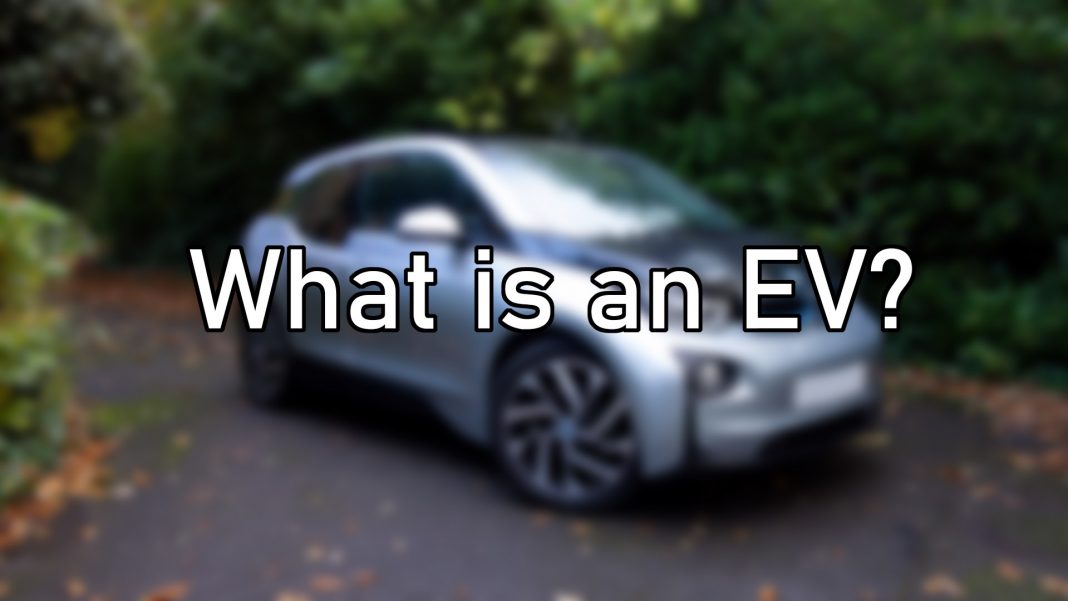 Electric vehicles (EVs) come in all shapes and sizes – from ships and planes to scooters and cars. In this article, we’ll be focusing on electric cars, where we’ll outline how they differ over their gasoline-led counterparts, provide you with a detailed breakdown of how they operate, and even list a few important facts. This is your TotallyEV guide to electric vehicles.

The different types of electric vehicles

To understand how an electric vehicle operates, it’s important to know that there are a few types available:

BEVa and FCEVs are the purest form of transport; such vehicles don’t rely on an Internal Combustion Engine (ICE), instead, they house lithium-ion batteries and fuel cells, respectively. The latter type is far rarer, where Hyundai, Toyota and Honda are the only automakers that produce them – FCEVs differ from BEVs as they require compressed hydrogen gas to operate, and as such, aren’t as popular among manufacturers in comparison to battery-operated vehicles.

BEVs are produced by the likes of Tesla to specialist high-end automakers, such as Automobili Pininfarina. These pure electric vehicles have large battery packs that are comprised of thousands of lithium-ion battery cells (the same batteries you’ll find inside a TV remote).

Both BEVs and FCEVs don’t produce any tailpipe emissions, and as a result, are considered far better for the environment. There is an argument from a few naysayers that claim that the production of batteries and hydrogen fuel cells outweighs the benefits of having no tailpipe emissions – we’ll let you be the judge.

Hybrids are an interesting kettle of fish. While hybrids provide better fuel efficiency and offset their carbon emissions by having a battery pack, they are also used by automakers as a means of marketing their ‘green’ credentials – in some cases, the battery pack is so small that it’s only used to help the vehicle launch from a standstill. Ultimately, hybrid vehicles are made up of an Internal Combustion Engine (ICE) and have a battery pack to assist them in certain situations.

Plug-in Hybrid Electric Vehicles (PHEVs) on the other hand, rely far less on the gasoline-led engine – PHEVs are considered better for the environment. As the name suggests, these vehicles need to be plugged into an electric charge point to recharge; once the battery has been depleted, they’ll rely on their engine to remain in operation.

How does an electric vehicle work?

As outlined above, there are different types of electric vehicles on the market. In its purest form, an EV has numerous battery packs lined within its floor – the space in-between the seats and the road – while some manufacturers, who convert regular gasoline-led models into pure electric cars place said batteries under the rear seats. When the former method is used it creates a lower centre of gravity, where a car will remain more planted on the road and as a result, has better handling characteristics.

Most in-car battery packs are made up of lithium-ion (Li-Ions or LIBs), which at the time of writing, is one of the largest outgoing costs in the manufacturing of an EV. This is down to the extraction and mining of rare minerals; thankfully, the price of developing large-scale batteries is falling, which coincides with tumbling all-electric car prices.

These batteries store energy, which are then replenished when the car is plugged into a charge point. Much like a smartphone, BEVs and PHEVs use electricity to recharge their batteries. In some cases, this process can take a multitude of hours, although modern electric vehicles have fast-charging capabilities – we’ll dive into charge times, below.

In terms of how an EV operates: once the accelerator is pressed, the car registers your demand and sends energy from the battery pack to the vehicle’s electric motor (or motors in premium EVs). This, in turn, propels the car forwards at a breathtaking pace. Unlike gasoline-led vehicles, there’s no delay – instant power wherever and whenever it’s required. As a side note: electric vehicles have a power rating, which is denoted in kilowatts (kW) and not horsepower (hp) – 1 kW equates to around 1.34 hp.

As BEVs operate purely on electricity, they don’t have a physical exhaust. However, FCEVs still require an ‘outlet’ to filter out non-toxic water from their system.

How far will an electric vehicle go on a single charge?

At the time of writing, the longest range all-electric vehicle is the Tesla Model S – you’ll find a comprehensive list of EVs and their quoted range, here. This premium EV will give you around 379 miles on a single charge on the Worldwide Harmonised Light Vehicle Test Procedure (WLTP) cycle. Hybrids will go even further, as their fuel tank allows them to go that extra mile without coming to a standstill.

Note: A WLTP figure must be stated on all cars sold within the European Union, while in the US, manufacturers quote the Environmental Protection Agency (EPA) cycle, instead. Previously, automakers quoted the New European Driving Cycle (NEDC) figure, which was developed in the 1980s; as technology and driving conditions have shifted over the years, this test has now been made redundant.

How quickly will an all-electric vehicle charge?

New technology in both chargers and batteries has meant that some cars can be replenished in under 30 minutes. However, these vehicles are often extremely expensive and chargers (such as ones offered by Ionity) cost far more to use over the regular-style alternative.

For most EV owners, it’ll take anything between an hour to 12 hours to charge. The large discrepancy comes down to your vehicle’s specifications; unlike their gasoline-led counterparts, EVs have different charge rates – like a smartphone or laptop. More premium vehicles will be capable of accepting up to 270 kW, while more affordable EVs will be limited to 7 kW, only.

Likewise, a charge point also determines how long it’ll take to replenish to full. Ionity’s blistering 350 kW chargers are the fastest in the world, however, most public chargers are rated at 3-3.7 kW, 7 kW and 22 kW, instead. So, while you might have an expensive Porsche Taycan Turbo S capable of receiving up to 270 kW, if you are to plug the car into a free 7 kW Pod Point charger it’ll take around 9 hours to charge from empty, as opposed to its quoted 22.5 minutes to 80% charge when connected to a high-powered source.

To throw another spanner in the works, cars have a kWh battery rating – this isn’t to be confused with their input charge rate or even their motor’s rated power (kW) – rather, this figure is quoted by manufacturers to depict their battery packs’ total capacity.

For example, in the UK, the Tesla Model 3 comes in three configurations: Standard Range Plus, Long Range and Performance, these have 54 kWh, 75 kWh and 75 kWh battery packs, respectively. As such, the Standard model has a quoted range of 254 miles (WLTP), while the Long Range has a 348-mile range and the Performance model, due to its higher top speed, will last 329 miles on a single charge.

There is also another way electric vehicles manage to replenish their batteries – regenerative braking. By converting kinetic energy that builds up when the brakes are applied, an EV manages to recoup energy by sending it back into its battery pack. This is one of the main reasons as to why EVs are best-suited for inner-city driving; due to a lot of start and stops, you can effectively adopt a one-pedal approach to not only help you brake but also conserve energy.

Electric vehicles come with different chargers; think of an Apple iPhone with its proprietary Lightning connector, a modern Huawei smartphone with a universal USB Type-C connector and a 10-year old Samsung phone with the old microUSB connector.

The same applies to electric vehicles, where you’ll find a few different-style connectors – be it the car’s connector port or the cable that leads from a publicly-available charge point:

From the above, the most commonly found in UK homes are the 3-pin wall plugs and Type 2 AC connectors, while on the roads you’ll find Type 2 AC, CSS and Tesla DC connectors.

How to find your nearest EV charge point

There is an ever-growing number of charge points cropping up around the world, and in the UK, suppliers such as Source London, ESB, Polar and Pod Point are among the best-known in the country.

Our favourite way of checking for availability and the location of a charge point is by using Zap-Map, a web-based and app-based platform that’ll pinpoint your nearest charger and let you know the supplier (and their rates).

If you live in a house or have permission by the landlord to install a charge point at your premises, we’d highly suggest investing in a home charger – these can save you considerable amounts of money when it comes to recharging (due to lower charge rates, namely in the evenings). As an added bonus, this means you can fully charge your car while you sleep.

What does the future hold for EVs?

Electric vehicles are growing in popularity and it’s easy to see why: they’re more efficient, offer instant acceleration and more importantly, are better for the environment as they have zero tailpipe emissions.

Consumers’ minds are shifting toward these more eco-friendly vehicles and with governments across the world committed to combatting climate change, EVs will soon in their entirety, replace gasoline-led vehicles. Right now, every manufacturer is either producing a hybrid or a fully electric vehicle; it’s likely that your next new car will be partly if not entirely electrified.

Read next: Polestar Precept: The future of the electric car