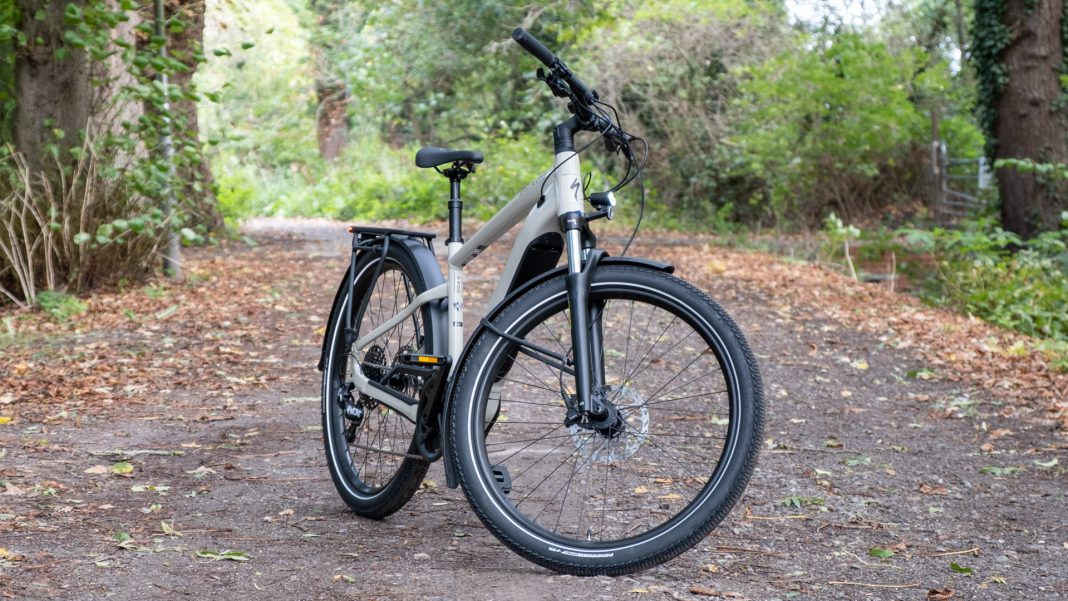 As a goliath of the traditional bicycle manufacturing world, few companies can match the time, effort, and engineering resources that Specialized commits to its product development. And with its stated mantra of “Innovate or Die”, the company has built its reputation on building great bikes that don’t come cheap. There’s consequently great anticipation about what it can bring to the e-bike market.

With the Turbo Vado 4.0 the company has sought to build the ultimate city e-bike that delivers “up to four times you”, getting you to your destination fresher and faster. It comes in four sizes and is compatible with the Specialized Mission Control app for an optimised rider experience. So, how did it perform, and can it live up to the hype?

The Turbo Vado 4.0 has an RRP of £3,900, placing it squarely at the premium end of commuter e-bikes. Spend even a few moments riding it though and it quickly becomes apparent that there’s value to be found, even at this price point.

The bike is very well-designed and comes fully equipped with high-quality components that guarantee a safe and comfortable ride. For example, the front suspension confidently deals with potholed road surfaces, the SRAM hydraulic brakes provide excellent stopping power and the SRAM 11-speed cassette offers a wide range of gearing to suit all riders and inclines.

Buy the Turbo Vado 4.0 from Specialized

It charges in just 2.5 hours and has a very impressive range of up to 90 miles (120km). Additionally, the extra-bright built-in lights, integrated mudguards and rear pannier rack mean it’s always ready to help you get from A to B, whatever the task and conditions.

The oversized aluminium frame has a relaxed geometry in keeping with its purpose as a practical bike for day-to-day journeys. The oversized Pathfinder tyres it comes fitted with feel like overkill for city riding but do open up the potential for the bike to be occasionally taken off-road.

The Turbo Vado comes equipped with an onboard computer and handlebar controls that are intuitive and easy to operate. Simply flip between the Eco, Sport and Turbo modes, depending on the level of support desired.

The most useful of these is Smart Control which makes range anxiety a thing of the past. The user enters how much battery they want to be left with at the end of the ride, along with their planned riding time, distance and elevation. The Turbo Vado then dynamically adjusts the level of battery support to accommodate this. For example, if you wish to get to work and retain at least 60% of the battery for the journey home. This can easily be specified in the app and is a very useful feature that, to the best of our knowledge, is currently unique to Specialized.

Other options available in the app include personalising the maximum and average level of assistance for the pre-programmed Eco, Sport and Turbo modes to the rider’s preference. Or alarming the bike and disabling the motor so it can safely be left in public and made much less desirable to thieves.

All-in-all, it’s a very impressive package. But there are a few minor annoyances that do need to be pointed out.

Firstly, it can be difficult to manoeuvre the bike through tight spaces. In locations like Richmond Park, for example, it’s common to see bike riders flip their bike onto its rear wheel to easily fit through the access gates. Yet the weight of the bike and positioning of the mudguards means that’s not possible with this bike.

Finally, the screws provided to fit the bottle cage are comically short. Presumably, that’s necessary to allow for the placement of the battery in the down tube. Yet, it significantly limits the range of bottle cages that can be considered compatible.

It’s in the performance department that the Turbo Vado 4.0 truly excels. It’s comfortable, fast, handles well and simply eats up the miles. There’s an attention to detail that simply makes the bike a joy to ride.

That starts with the motor, which unlike most of its rivals, Specialized has designed and developed in-house. It’s highly responsive and its positioning contributes to the low centre of gravity that contributes to a very stable ride.

It continues with the quality of the build and is complemented by the integrated computer that provides all manner of useful information back to the rider. For example, just like most e-bikes, it tracks the speed, distance, remaining battery, and calories. However, it also goes much further, displaying things like cadence, rider power and estimated remaining range.

Finally, the rider experience is significantly enhanced by the accompanying Mission Control App which allows one to track and customise all elements of the ride. As already mentioned, it makes range anxiety a thing of the past and ensures that with the flick of a switch, the rider can choose to get more of a workout or let the motor do the majority of the work. 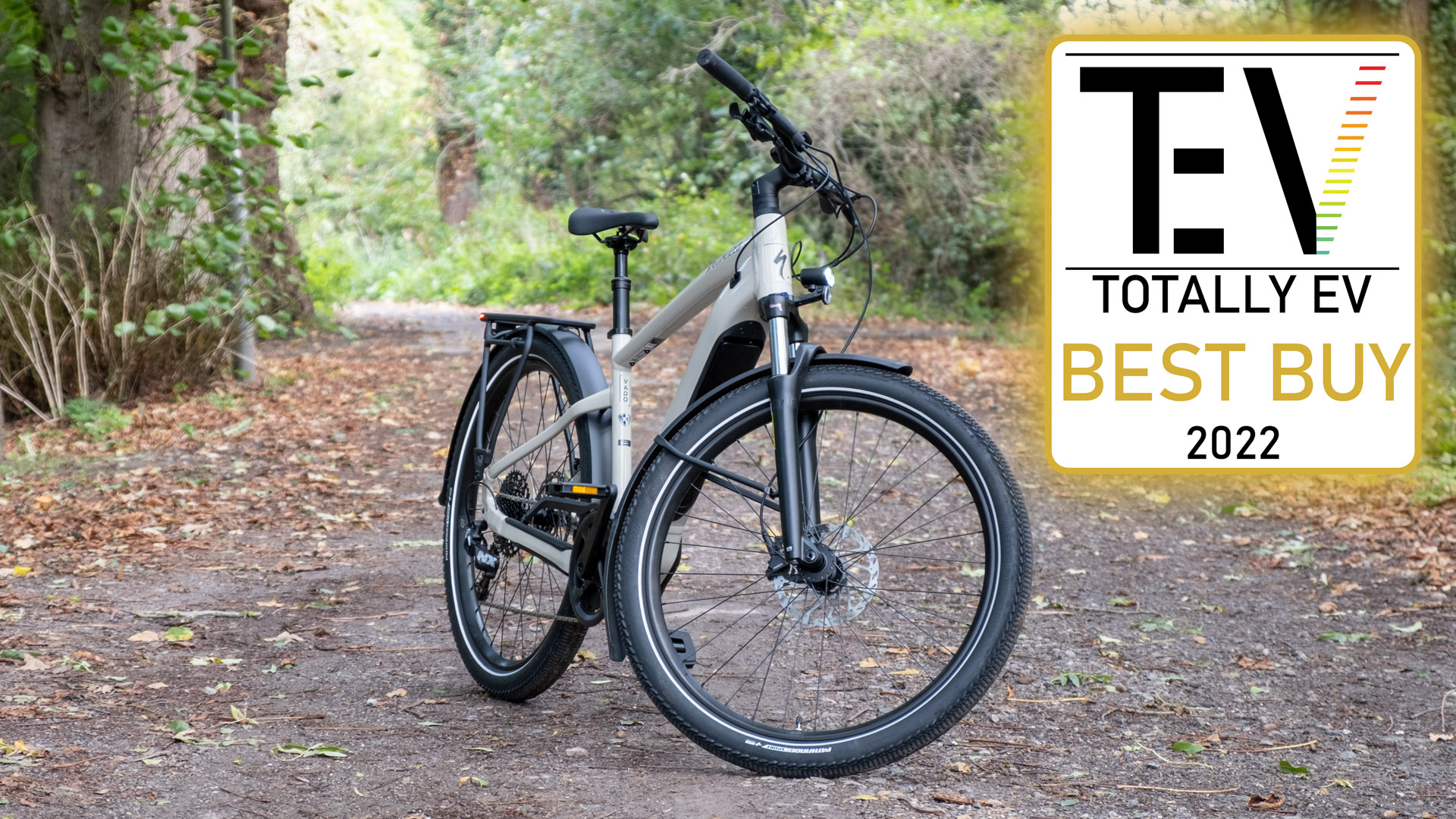 The Specialized Turbo Vado 4.0 is the best e-bike we’ve reviewed to date. It doesn’t come cheap but it’s a very versatile bike that justifies its premium price tag. For many, it’s the only bike they’ll ever need, proving equally adept for commuting, carrying luggage or mixed-terrain leisure rides.

Buy the Turbo Vado 4.0 from Specialized

The options to adapt the riding experience and levels of assistance to an individual rider’s preference ensure it stands out from the competition, meaning those not put off by the price point should seriously consider the Turbo Vado 4.0. As such, the e-bike receives TotallyEV’s Best Buy award.