The Super Soco TS Street Hunter is, as the name suggests, an all-electric street bike. It has a slightly widened and elongated profile over a few of its competitors, therefore appealing to those who want a slightly larger electric motorbike for their city commutes.

If you’d prefer to watch a review of the Super Soco TS Street Hunter, head on over to our YouTube channel.

This does come at a price, however, as the TS Street Hunter costs £3,799 (incl the £500 Plug-in Motorcycle Grant) and rises to around £4,299 for the long-range model. The former has a claimed range of 32.3 miles (52km) while the latter sits at 67.7 miles (109km). Both models come with a two-year warranty, and a three-year warranty on the battery and the motor.

To ride any of the aforementioned bikes, you will need to pass your CBT, which in the UK can be done if you hold a provisional driving license or of course, one can attain an A1 license.

In terms of its design, the TS Street Hunter is a looker and is available in a few different finishes. Its headlights and taillights give it that uplifting modern look, while its flared side profile provides that sporty pizazz. The bike measures 2038mm in length, 788mm in width, 1085mm in height, and has a 1325mm wheelbase.

Due to its slightly larger size, it naturally sits on wider and larger tyres than its sibling, the Super Soco TC and its competitors, such as the Sunra Miku Super. Indeed, at the front you’ll find 100/80-17, and at the rear 120/70-17.

Despite its size, the 102kg bike isn’t too heavy to manoeuvre at a standstill. As for the rated capacity, it sits at 150kg, while the rated maximum load is quoted at 266kg. Indeed, one can add a rear rack, box or transport a passenger. Transporting a pillion isn’t an issue, as unlike smaller alternatives on the market, the extended portion of the cushiony seat is accommodating even for a full-sized adult; the rear footrests are foldable and both the front and back ones are textured to provide grip.

The disappointment, however, is the omission of a centre stand. Given the bike’s larger frame, one might have expected it to be featured, especially if parked for longer periods of time, but alas that’s not the case. Thankfully, its side stand is rigid, easily deployed and retracted and provides excellent support, even if you’re parked up on sloped tarmac.

Moving onto technology, there’s a digital LCD display, which shows the remaining charge with the bike’s estimated range, a large speedometer, a power level, a trip computer, an indicator to know which mode the bike is currently set to, the outside temperature and the current time. The latter is set via the Super Soco app. Through it, one can check the bike’s status and better still thanks to the bike’s built-in tracker, one can locate it if it ever goes missing. This is a great security feature and one that might prove to be useful in the event of a theft.

On that note, the wireless remote and physical key are both pivotal for the bike’s operation. The former is used to unlock the storage compartment and to access the batteries, and is also a means of applying the steering lock, which is located by the front suspension. As for the remote, there are three buttons, which provide you with the means to lock, unlock and power the bike. The buttons are a little sensitive, however, so you’ll want to ensure the remote is securely stored in order to avoid any misoperation.

Moving onto the bike’s handlebars, on the left you’ll find the high beam, horn and indicator switch. It’s rather disappointing that a push-to-cancel button isn’t provided, thus you’ll have to carefully slide it back to its centre position each time you indicate. Worse still, when indicating, there’s no audible sound. Meaning you’ll have to remember or glance down towards the display in order to check if the indicator has been switched off.

On the right, there’s the hazard light, the kill switch, which is needed alongside the brake lever in order to operate the bike from a parked state, and a mode selector. Level 1, 2 and 3 modes correspond to the bike’s top speed of roughly 26mph, 36mph and 46mph, respectively. It’s a useful way of ensuring you don’t break the speed limit and in the slower modes, you’ll get more range.

Onto storage space, there’s a sizeable compartment located at the front. This should suffice for a few valuables and even the bike’s mains charger. Should you have the single-battery model, you’ll find further storage beside the primary battery, whereby one can fit the charger here too. Doing this, frees up the top bay allowing you to transport more, such as a disc lock and chain.

It is a shame, however, that there’s no USB port in this area. A few of its competitors provide one, which allows you to charge a smartphone on-the-go. Thankfully, the storage area is large enough to accommodate a large-sized power bank, where you’ll be able to route a cable out of the front bay.

As for comfort, the cushiony seat and the riding position are both excellent, especially for those who weigh around 70kg and measure 6ft (182cm). We had no issues whatsoever on our commutes and felt comfortable at all times.

The TS Street Hunter’s comfort is bolstered by its excellent suspension setup and its 173mm ground clearance; there’s the front fork that aids going over the odd speed bump, and a spring located underneath the seat which absorbs anomalies. The combination provides a pleasurable ride around the city, yet is adept to cope with windy country roads.

Its larger profile, which includes its tyres also help with stabilising the bike at higher speeds. However, there’s still a little bit of wobble when faced with side winds, especially when riding at around 40-50mph. It’s a complaint we’ve had of a few other electric bikes, such as the Sunra Miku Super, which incurs even more instability due to its smaller form factor.

Elsewhere, the 103kg bike has front and rear disc brakes which provide an ample amount of stopping power. However, you will have to squeeze the levers pretty hard to perform an emergency stop.

Now despite its larger size and profile, one might think the TS Street Hunter is a lot quicker than its rivals, however, that’s not the case. The rear-hub motor dispatches 2.5 kW (3.3hp) of power and 38 Nm of torque. Using Racelogic’s Vbox Sport to conduct our tests, we noted a 0-20mph time of 4.07s, 0-30mph in 6.77s and 0-40mph in 14.85s – note, this is with a 70kg rider, so if you weigh more you’re likely to attain slower times, and vice-versa. To put these numbers into perspective, the smaller Sunra Miku Super achieved these speeds in 3.2s, 5.78s, and 10s, respectively. Granted it’s nippy enough for most, but some might have expected a bit more grunt.

These modes correlate with how much range one can attain from its singular 32 Ah battery. Indeed, via the instrument cluster, Mode 3 claims to provide 31 miles at 100% charge, Mode 2 with 55 miles and Mode 1 at 68 miles. The latter two figures are unattainable, whereby, in reality, flicking between Mode 1 and 2, and occasionally using Mode 3 will net you around 35 miles of range. Coincidentally, this isn’t far off the manufacturer’s claim of 32.3 miles (52km). While we haven’t tested the dual-battery model, which claims to attain 67.7 miles (109km) on a single charge, one can only imagine a range of 60-65 miles of real-world range while riding predominantly in Mode 1 and 2.

Note, the cost of the second battery hovers around £500, though, we only found one online retailer who specified the cost; the rest, Super Soco included, seem to omit the cost of a secondary battery from their website.

Its range should suffice for most commuters but will come as a disappointment for those who use it for leisure. Given the bike’s price, one might expect better, as a few of its competitors, such as the likes of the Sunra Miku Super provide 55-60 miles. Granted the Miku Super on review had two batteries but coincidentally comes in at a cheaper price than the single battery variant of the TS Street Hunter.

Should you run out of charge, the bike itself can be plugged in to charge one or both of the batteries that are housed within. Note, there’s no locking mechanism on the bike to protect your charger from being stolen, so this will only be of use to those who have a garage.

Should you opt to remove the battery or indeed batteries from the bike, it’ll take 3.5 hours. Alas, like the aforementioned Sunra electric bike, there’s no means of simultaneously charging both batteries outside of the bike itself; they have to be independently charged, which is quite an annoyance especially if you’re intending to charge overnight.

One should also consider that each battery weighs around 12kg. While the manufacturer has done its best to make it as intuitive as possible to remove them from the bike’s frame, it’s still a little tricky. Aside from all this, the external power brick which is used to charge the batteries – be it in or out of the bike – does get pretty toasty. Thankfully, however, it’s quiet, whereby it doesn’t have a loud fan and as such, can be taken into a workplace or a bedroom without causing any disturbance. 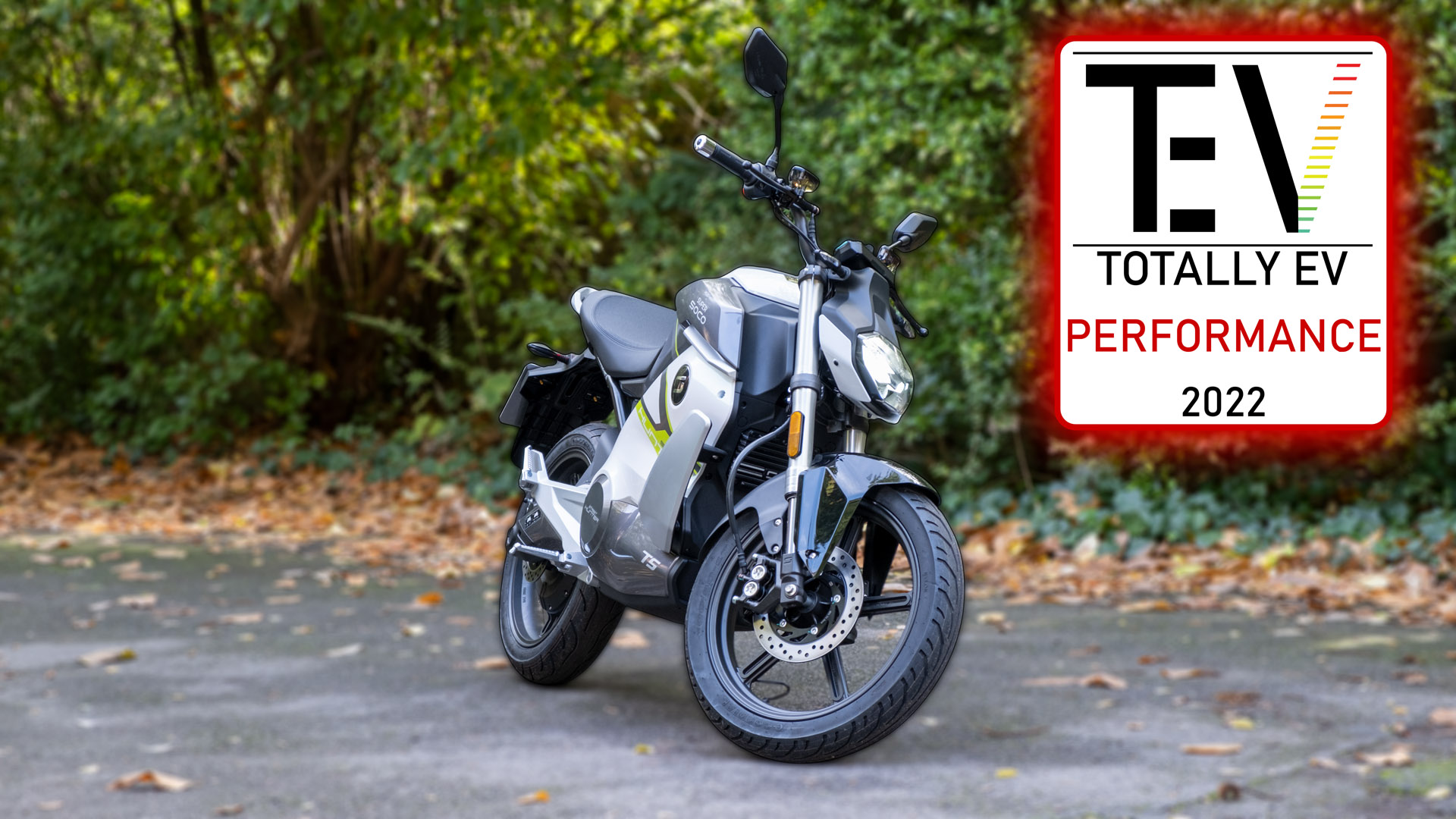 On the whole, the Super Soco TS Street Hunter is a fun-to-ride all-electric street bike. It’s stylish, supremely comfortable to ride, offers good storage and seating, and has excellent riding characteristics. As a result, it receives our Performance award.

Ironically, however, its lacklustre performance and electric range are a letdown, especially considering its asking price of £3,799 or £4,299 for the dual-battery model. If you’re in the market for an inner-city runaround, consider the smaller, longer range and yet cheaper Sunra Miku Super instead.