The Audi e-tron GT is a high-performance electric vehicle that goes toe-to-toe with its German sibling, the Porsche Taycan. We found the Audi offered a significantly bettered range, a more practical interior design and had a similar driver’s feel; as such, it received TotallyEV’s Best Buy award.

When it comes to audio, the e-tron GT houses a 10-speaker audio system that has 150 Watts of power. Opt for the Bang & Olufsen (B&O) upgrade, which is comprised within the £3,590 ‘Comfort and Sound Pack’ option, and the tally increases to 16, while peak power goes up to a staggering 710 Watts. On review is the latter system.

To tinker with the vehicle’s audio settings, you’ll have to navigate to the appropriate menu on the 10.1″ infotainment system. Within the ‘Sound’ tab you’ll find a few options, here are our optimal settings:

Much to our disappointment, the manufacturer doesn’t provide independent mid- and high-frequency adjustments. Instead, any changes to the ‘Treble’ EQ will result in both of the frequency bands being affected. Thankfully, the mid- and sub-bass tones can be adjusted independently; an advantage the Audi B&O system has over the Burmester system found within the Porsche Taycan.

As for ‘3D sound’, it taints the overall sound reproduction and creates a fishbowl-like effect. As such, we’d suggest disabling it all together in order to attain the most accurate sound reproduction. Likewise with the ‘Surround level’, whereby leaving it in its default state results in a tainted listening experience.

In order to connect up to the vehicle’s system, you can use a wired connection over Apple CarPlay or Android Auto, and for those who prefer to retain a wireless transmission, here the system supports both the AAC and SBC Bluetooth codecs, where the former is preferable for higher-quality playback.

As for media controls, they can be accessed through the display, via physical buttons found on the steering wheel and through a partially touch-sensitive circular pad found on the centre console. We’re particularly fond of the latter control wheel, as it’s intuitive and well-placed for both the front occupants.

Read next: Porsche Taycan audio review: Worth upgrading to the Burmester system?

For a demo of the Audi e-tron GT’s audio system head on over to our YouTube channel.

In terms of its audio configuration, the B&O system that we have on review, has 16 speakers that combined output 710 Watts. At the front, there is: a tweeter at each extremity of the dashboard; a centre loudspeaker placed in the middle of the dashboard; active wide-band speakers within the A-pillars; a mid-range and bass speaker within each of the front doors. At the rear, there is: a bass speaker and tweeter within the rear doors, and two effect speakers within the rear parcel shelf. Finally, there’s a subwoofer in the boot. As such, there are nine audio drivers at the front, six at the back and one in the boot.

In the stock audio system, which comprises of ten speakers, there’s no subwoofer, rear parcel shelf speakers, wide-band drivers within the A-pillars nor a centre dashboard speaker.

Delivering on its promise, the B&O upgrade provides a hearty low-end extension thanks primarily to its rear-mounted subwoofer. Here, the speaker excels throughout the sub-bass frequency range, meaning bass-heavy tracks such as T-Pain’s ‘Going Thru a Lot’, sound rich and hearty. Indeed, the eloquence of the system’s low-end extension is exquisite – the B&O subwoofer is up there with some of the very best non-aftermarket solutions.

Likewise, its mid-bass presence is faultless. With a notch taken off the Bass EQ, the system provides plenty of grunt and yet, remains critically precise; a trait that one-ups the Burmester’s system found within the Porsche Taycan.

However, much like the Taycan’s ‘premium’ audio system, the Audi falls short in the mid-range department; this could, in part, be due to the system’s inability to independently adjust the mid- and high frequencies. Alas, adding too many notches to the ‘Treble’ EQ will result in a fatiguing sound, as the highs become overzealous; as such, we could only add a singular notch to the equalizer setting in order to help boost the system’s mid-range presence. Nevertheless, Christina Milian’s voice sounds a bit too pushed back in her 2006 record, ‘Say I’; here, the artist’s voice is overshadowed by the bassline and instruments.

On the plus side, the highs are done to perfection, where throughout the song, the cymbals come across accurately and provide plenty of extension at the top end. There’s no denying that the tweeters both at the front and rear of the cabin do a phenomenal job in providing an engaging experience.

Moving onto the soundstage, the B&O system provides excellent instrument separation, great width and depth – specifically at the front of the cabin, where there are extra speakers. However, it’s not quite up to standard in comparison to the likes of the Tesla Model 3 or Polestar 2, where both of these vehicles’ stock systems provide a slightly more engaging sound.

We weren’t particularly fond of the system’s 3D option, either. It seems to create a fishbowl-like effect, portraying the artist’s voice inaccurately and creating an odd spatial sound that reminds us of an inexpensive 5.1 or 7.1 virtual surround sound gaming headset. Likewise with the ‘Surround level’, we chose to keep this to a minimum in order to maintain a wide sound reproduction whilst not affecting the accuracy of the system.

Finally, onto cabin noise, the Audi has excellent passive noise isolation. Our vehicle didn’t even have the acoustic glazing option, which normally comes as standard in the reviewed Vorsprung model, and yet, it performed extremely well in our tests. At a standstill, we recorded 34-36 dBA; driving at 20mph, 50-55 dBA; driving at 30-40mph, 60-65 dBA; and at 70mph, 75-80 dBA. The latter test suffered from tyre noise, namely when going over harsher motorway terrain. As for when the windows are brought down, the level increases by roughly 10 dBA.

Elsewhere, we did notice a bit of rattling by the front air vents and the rear door bins, but we hope this is due to our tested vehicle being a pre-production vehicle – sadly we can’t confirm if these issues persist on the regular production version of the vehicle. 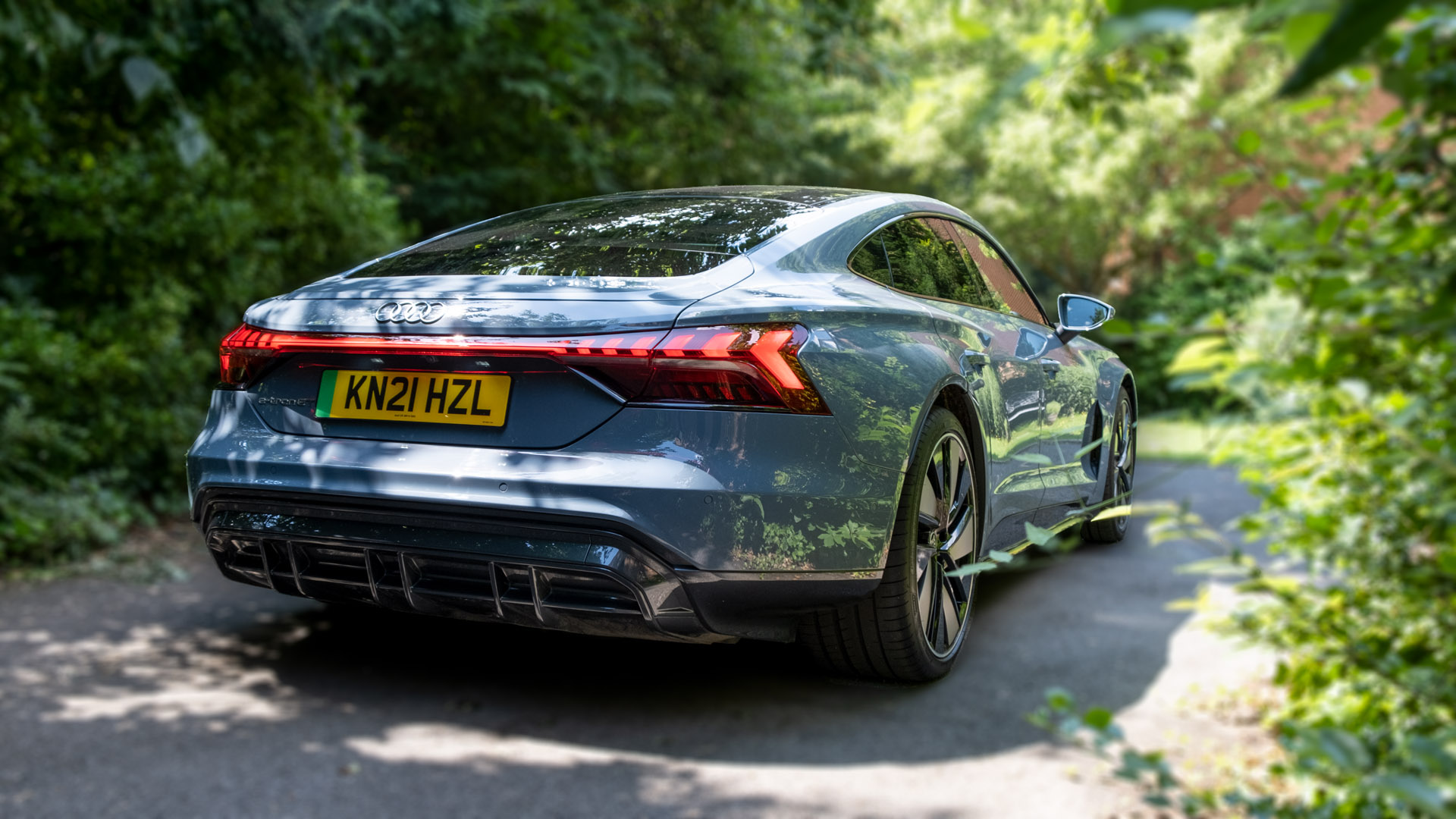 On the whole, the Audi e-tron GT’s audio system is extremely impressive and will certainly appeal to certain individuals. The B&O upgrade is recommended if you’re into your music and want a flawless low-end experience.

However, in comparison to some of the best audio systems on the market, we were left disappointed in the system’s mid-range reproduction; it’s veiled, pushed back and doesn’t even have the ability to be tailored to your liking via the EQ settings.

Of course, these are our subjective thoughts on the vehicle’s audio system, so we’d love to hear your thoughts in the comments section below or via social media; we’re on: YouTube, Instagram, Facebook, Twitter and LinkedIn.

BMW X2 audio review: Should you get the Harman Kardon system?