The Tesla Model 3 is an all-electric saloon that has a claimed range of up to 360 miles on the WLTP test cycle. From our tests of the Long Range AWD, we managed to achieve a staggering 310 miles on a single charge, making it one of the longest-range EVs on the market. The car didn’t just excel in range but in many other domains too, leading us to give it our coveted Best Buy award.

But, how does its system fare when pitted against its competitors, such as the Polestar 2, which houses a 13-speaker system? As standard, the Model 3 – formerly known as the Standard Range Plus (SR+) – costs £42,990 (up from £40,900) houses an eight-speaker system with ‘Limited Immersive Sound’; this forms part of the ‘Partial Premium Interior’ package.

Move up to either of the AWD models – Long Range (LR) at £49,990 (up from £48,490) and the Performance (P) at £59,990 – and you’ll be treated with a ‘Premium Interior’ package instead. This comprises a 15-speaker audio system with ‘Full Immersive Sound’. Indeed, the LR and P get six extra audio drivers within the cabin and a subwoofer in the boot. On review is the Model 3 LR, thus the higher-spec audio system.

To tinker with the vehicle’s audio settings, one has to navigate to the ‘Audio Settings’ tab on the 15.4″ infotainment system. Here, you’ll find a five-ban equaliser, where we left the entire mid-range untouched, took off 2 dB from the Bass EQ and 0.5 dB from the Treble EQ. The balance and fader were centred, while the Immersive Sound toggle was set to ‘Standard’.

To connect up to the vehicle’s audio system using your smartphone, you’ll be limited to using Bluetooth only – the USB Type-C ports are for charging only. As Tesla’s infotainment system doesn’t support Android Auto nor Apple CarPlay, this is the only way to playback media files from a phone. Here, the AAC and SBC codecs are supported. It is, however, a real shame that the aptX and LDAC codecs aren’t.

On the plus side, there is the option to plug in a USB drive – must be formatted to FAT32 – where you’ll be able to playback MP3 and higher-resolution files that have been recorded in the FLAC (Free Lossless Audio Codec File) and WAV formats – up to 24-bit 192 kHz is supported. This makes the Model 3 among a finite group of cars that can support higher resolution playback – making it ideal for budding audiophiles.

Elsewhere, the ‘Premium Interior’ package, gets you complimentary one-year access to Spotify, and video streaming platforms, Netflix, YouTube and Twitch. The entry-level Model 3, that has the ‘Partial Premium Interior’ has a 30-day trial of these services, instead.

As for media controls, there are the onscreen touch controls and the physical left scroll wheel on the steering wheel. When pressed it pauses or resumes, and when it’s shifted to the left or right will go back or skip a track respectively. If you roll the wheel upwards or downwards it’ll adjust the overall playback volume.

For a demo of the Model 3’s audio system head on over to our YouTube channel.

When it comes to its audio configuration, the Model 3 LR and P have a whopping 10 speakers located at the front of the cabin, and five at the rear, including a subwoofer in the boot. There are also two amplifiers that help drive power to all of the speakers.

We reached out to Tesla to get further details of the vehicle’s audio configuration, but the automaker couldn’t divulge this information. Digging around on the internet, we found some information on the Model 3’s 15-speaker audio system – take of it what you will, but we can affirm the positioning of all speakers is accurate. 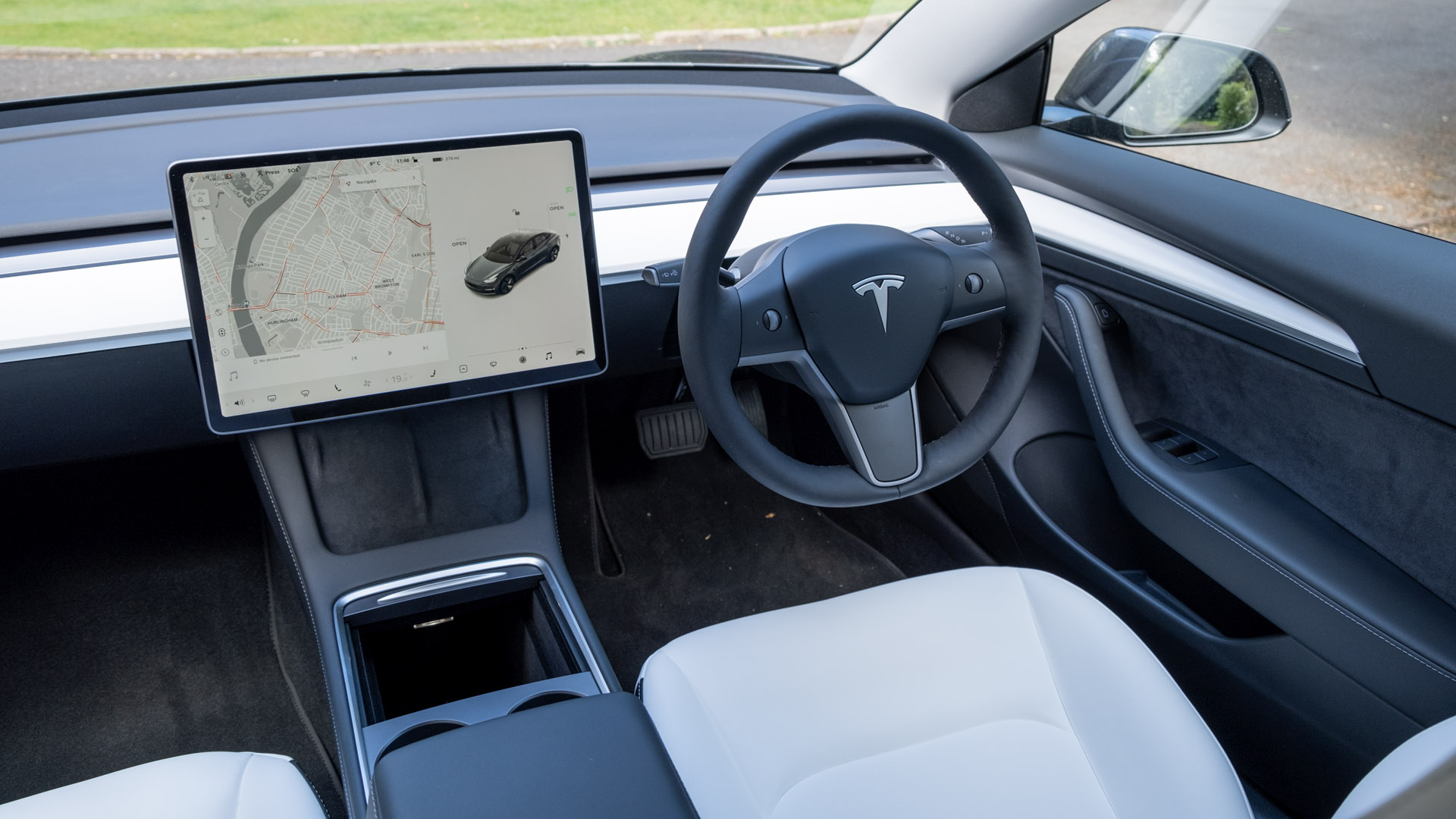 At the front of the cabin, you have three 4″ 33W mid-range drivers that are located at the front cowl (the area between the dashboard and windscreen) – one on either side and a third at the centre of the cowl. Next to the centre mid-range speaker resides a 1″ 25W tweeter. There’s a further 1″ 25W tweeter located by each of the side mirrors. Mounted halfway up towards the roof of the car, a 2.5″ 2W mid-range driver can be found on both the A-pillars. Move onto the front doors and you’ll find an 8″ 80W woofer on either side.

At the rear of the cabin, there’s a 4″ 33W mid-range driver located on each of the rear doors, and an identical speaker found towards the rear boot lid. To complete the system, a 160W subwoofer resides in the boot.

If these wattage and driver sizes are valid, this would yield a total peak output of 630 Watts. On paper, this outshines the Polestar 2’s 13-speaker configuration that is capable of producing up to 600 Watts. However, wattage claims – be it if they’re accurate or not – don’t equate to quality. So, how does Tesla’s premium audio system stack up? In a nutshell, it’s incredible and slightly superior to its all-electric rival.

The Model 3’s biggest ‘weakness’ – much like the Polestar 2 – is that its sub-bass extension doesn’t deliver a prolonged sub-bass extension, such as you’d find on the likes of the Hyundai Ionic Electric or more expensive systems such as the Naim system found within a Bentley. That’s not to say the Model 3’s sub-bass extension is poor, far from it, it’s just not perfect. For a vehicle that costs under £50,000, it’s still spectacular.

Its prowess in the low-end frequencies doesn’t stop there. Indeed, its mid-bass presence is plentiful and its overall accuracy exquisite. For example, take the challenging ‘Shelter Me’ by Dart Rayne, Yura Moonlight & Cate Kanell – throughout the song, there’s a progressive heartfelt bassline, which is exactly what you hear and feel when sat inside the Model 3. It’s exciting and keeps your head bopping to the beat. 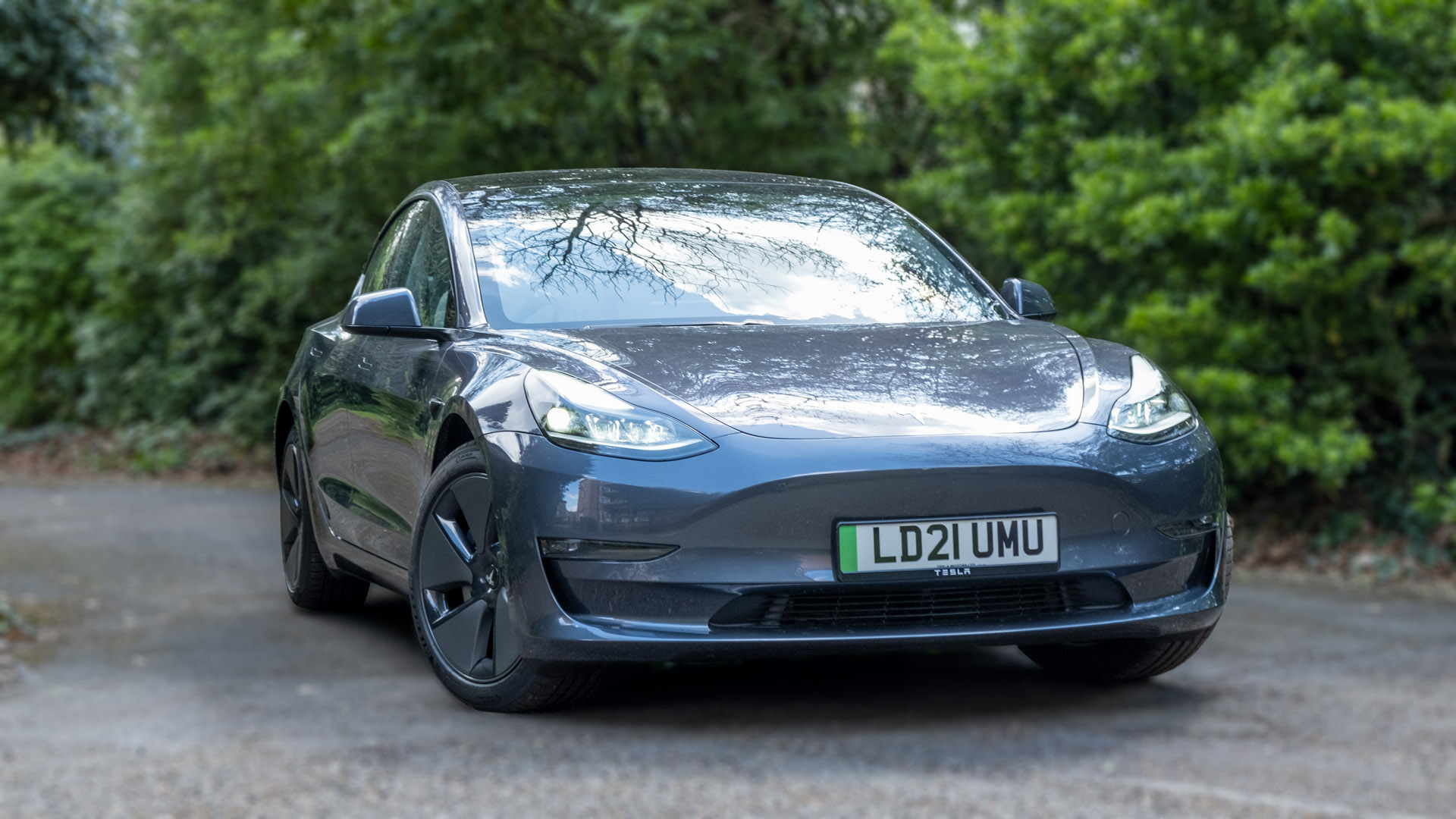 With such precision and emphasis in the lower frequencies, one might expect a rather recessed mid-range, but yet again, the Model 3 dispatches an incredible performance throughout the frequency range. There’s no sign of a dip in the lower or upper mids either, something we found affected the Polestar 2 in the latter frequency range. Here, the almost comical vocals in Tuxedo’s ‘Scooter’s Groove’ sound full of life and accurate, both at the front and rear of the cabin.

Moving onto the highs, they extend extremely well and provide plenty of excitement. We’d suggest reducing the treble EQ by a slither in order to tail off the harshness that one might hear at louder volumes, but of course, your mileage may vary.

What really impresses in comparison to its rival, is the Model 3’s ability to deliver a phenomenal soundstage. Set to the ‘Standard’ immersive mode, we find the system engaging, wide and dispatches precise instrument separation that can truly be heard at the front of the cabin. The ten audio drivers work in perfect harmony to make you feel as if you’re listening to the Eagles perform ‘Hotel California’ live in concert. At the rear, the four audio drivers do hinder the system’s ability to deliver the same level of engagement but take nothing away from it, it’s still impressive.

Should you want a more fulfilling sound, you might want to opt for ‘High’ immersive sound option, but be wary as this does affect the overall accuracy of the audio system. Dial it to ‘Off’ if you want more of a ‘stereo’ experience; this option might be favourable to audiophiles, but does hinder the system’s width and depth. 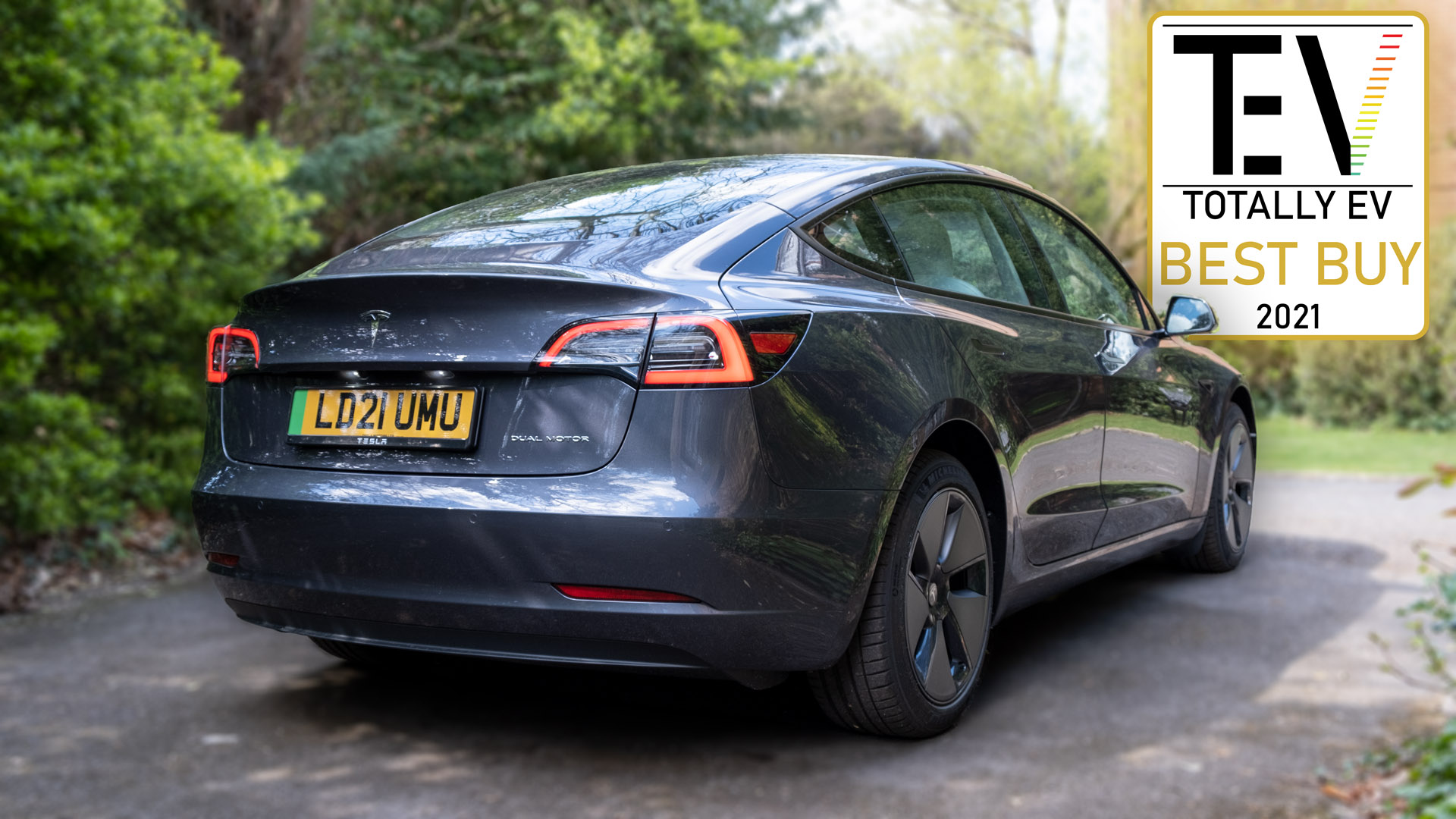 Frankly, we thought the Polestar 2’s audio system would be hard to beat, but the Tesla Model 3 takes it that one step further in delivering a perfect soundstage and a slightly bettered mid-range reproduction. While both receive our Best Buy award, the Model 3’s audio system is our highest-rated one to date.

One might argue that if you’re an audiophile looking to buy the Model 3, you should opt for the Long Range or Performance variants over the Standard Range Plus – not just for their bettered range and performance, respectively, but also for their more capable audio system.

Would you save up to inherit the ‘Premium Interior’ package with a purchase of the LR or P models or settle for the entry-level Model 3? We’d love to hear your thoughts, be it if you’re a casual listener or an avid audiophile. Let us know in the comments section below or via social media; we’re on: YouTube, Instagram, Facebook, Twitter and LinkedIn.