The Fiat 500 Electric is a small electric car that oozes quality and style. Starting from £20,995 it sits on the more affordable end of the EV market. In comparison to its rivals, we found the 500e provided exceptional driving range for a vehicle of its size (140-160 miles) and aesthetically stood out from the rest of the crowd. As such it received TotallyEV’s Best Buy award.

To tinker with the vehicle’s audio settings, you’ll have to navigate to the appropriate menu on the 7″ (or 10.25″) infotainment system – here are our optimal settings:

In order to connect up to the vehicle’s system, you can use a wired or wireless (Wi-Fi) connection over Apple CarPlay or Android Auto. If, however, you’d like to connect over a Bluetooth connection, the Fiat 500e supports the SBC, AAC and LDAC Bluetooth codecs. The latter is extremely rare, where it’s the first time we’ve seen the audiophile codec used by any manufacturer.

For reference, SBC transmits at 320 kbps, AAC at 250 kbps and LDAC at an incredible 990 kbps. It’s, alongside LHDC (HWA), the best form of codec one can use over a Bluetooth connection on an Android device. This results in a noticeable improvement in audio quality, where songs – no matter the source quality – sound more dynamic, less compressed and have a broader soundstage reproduction.

Note, an Apple iPhone is limited to the AAC codec, while Android phones running Oreo 8.0 or above will be able to utilise the higher quality LDAC codec.

Moving onto media controls, they can be accessed through the display or via cleverly-positioned physical buttons found behind the steering wheel – identical to that of the Jeep Renegade 4xe; this makes switching radio station/track or volume really intuitive as one doesn’t have to dislodge their hand position off the wheel.

For a demo of the Fiat 500 Electric’s audio system head on over to our YouTube channel.

In terms of its audio configuration, two 5″ mid-woofer drivers reside within the front doors, while 0.75″ tweeters can be found within the A-pillar. If one opts for the six-speaker configuration, you’ll find an additional two 3.75″ full-range drivers at the rear of the cabin.

Unsurprisingly, given the omission of a subwoofer, the system struggles to produce much low-end extension through Skepta and J Balvin’s single, ‘Nirvana’. Throughout the song, the sub-bass tones are cut short, while the mid-bass impact is pronounced. Indeed, the mid-woofer drivers manage to keep up with the song’s progressive bassline and might fool you into thinking that the system can extend into the lower echelons of the bass frequencies.

Nevertheless, the mid-bass tones are certainly felt throughout the cabin, and while it does have a little bit of an uncontrolled nature and thus can rattle at louder volumes, it’s still very much agreeable to our ears.

Similarly, the highs, at the front of the cabin are executed pretty well. With two notches added onto the Treble EQ, they portray enough sparkle and clarity at the top-end. Unfortunately, at the rear of the cabin, the Fiat 500e’s exciting sound reproduction is a little tame, as with no audio drivers in the stock setup, there’s nothing to entertain rear occupants.

Likewise, the vehicle’s broad soundstage reproduction is hindered by the lack of rear-mounted drivers; from the rear of the cabin, the Fiat has a unidirectional sound. At the front, it’s far more pleasant, as the four speakers fulfil the small-sized cabin with ease. One might expect poor width and depth, but given the vehicle’s size, the four audio drivers do an excellent job. Instrument separation, however, could have been better – namely in the mids, where the mid-woofer drivers have their work cutout.

Speaking of which, the mids are recessed and pushed back, with Alicia Keys’ voice sounding drowned out in ‘It’s On Again’, rather than taking centre stage. One might think to adjust the ‘Mid’ EQ, but doing so will affect the overall mid-range accuracy; as such, we’d suggest leaving it in its default state and accept a V-shaped sound signature, instead.

Finally, onto cabin noise, the Fiat has surprisingly good passive noise isolation. At a standstill with the cabriolet model, we recorded 35-36 dBA; driving at 20mph, 50-55 dBA; driving at 30-40mph, 65-70 dBA; and at 70mph, 85-90 dBA. The latter speed suffered from tyre noise, namely when going over harsher motorway terrain. As for when the windows are brought down, the level increases by roughly 7-10 dBA. 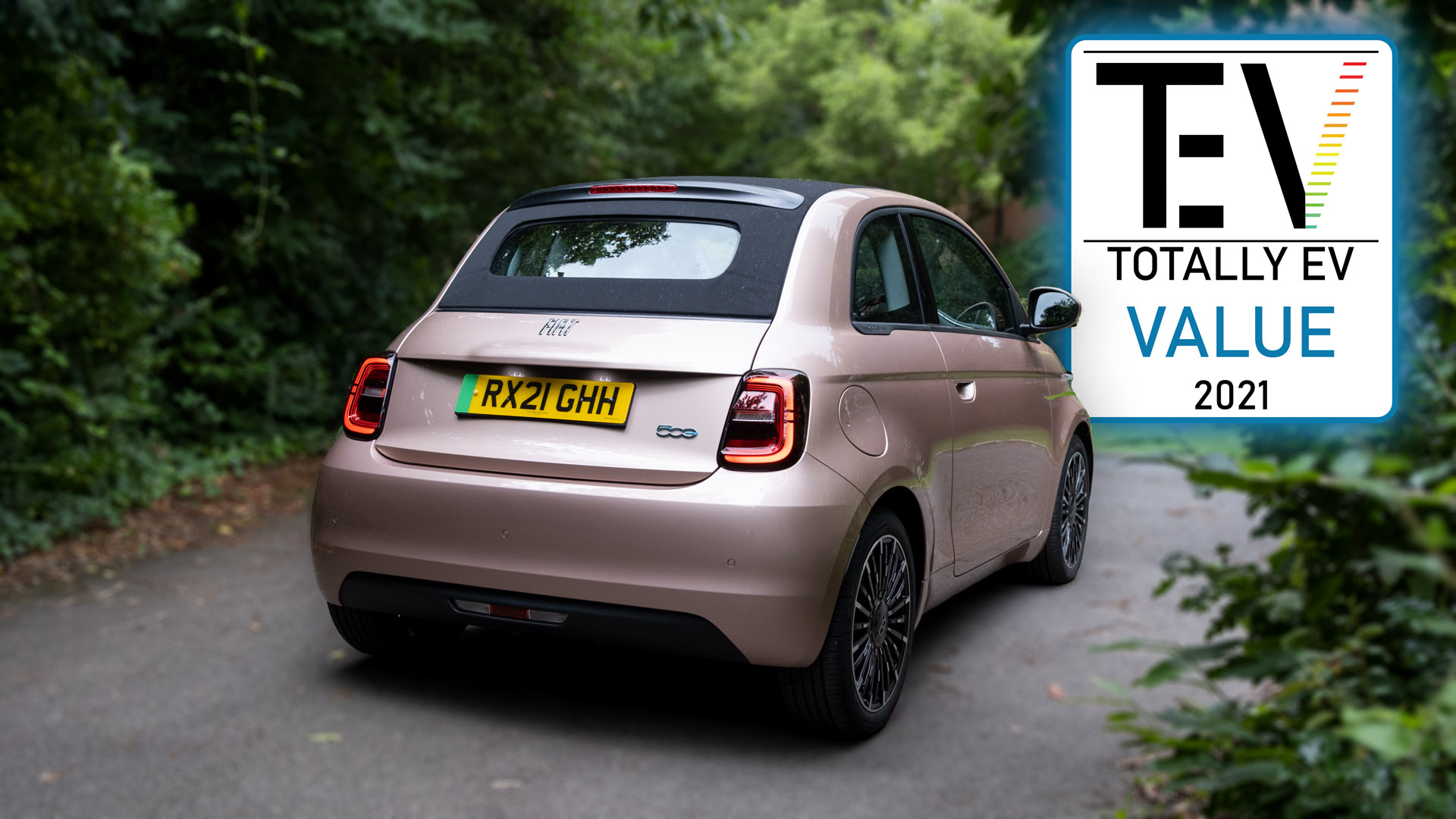 While the Fiat 500 Electric’s audio configuration doesn’t incite much excitement on paper, it’s certainly impressive for a system that only features four audio drivers; it caught us by surprise as to how much fun we had when listening to music, especially when using the LDAC codec on our Android smartphone.

If you’re an avid audio enthusiast, we’d suggest getting the £850 ‘Eye Park Pack’, or splashing our on the La Prima model, in order to get rear speakers – this will bolster the overall soundstage and provide a more fulfilling experience. Nevertheless, the stock system receives TotallyEV’s Value award, as it’s a good performer and should be commended for its audio prowess.