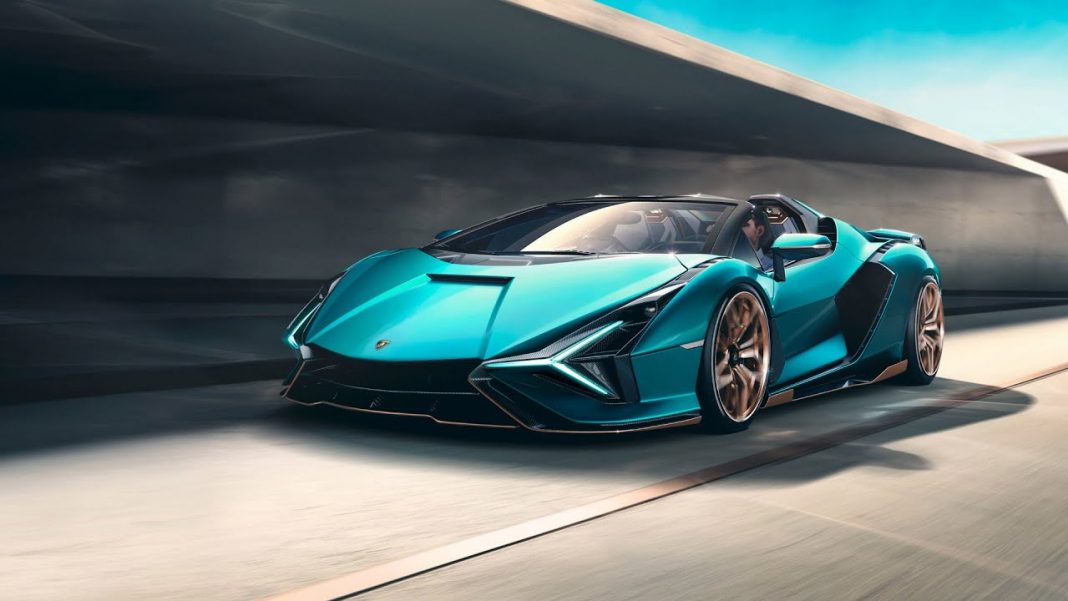 On 8 July, a new era began for the Italian manufacturer, Lamborghini, as it announced a limited edition, open-top hybrid sports car – the Sián Roadster.

The 602 kW (819 hp) vehicle reaches a top speed of 218 mph (350 km/h) and accelerates to 62 mph in 2.9 seconds. This is the result of its V12 engine and hybrid system working in unison to make the Sián Roadster the fastest car the manufacturer has ever produced.

“The Sián Roadster encapsulates the spirit of Lamborghini,” says Stefano Domenicali, Automobili Lamborghini Chairman and Chief Executive Officer. “The Sián’s innovative hybrid powertrain heralds the direction for Lamborghini super sports cars, and the open-top Sián Roadster affirms a desire for the ultimate lifestyle Lamborghini as we move towards a tomorrow demanding new solutions.”

The one of 19 cars produced debut in ‘Blu Uranus’ (pictured), a colour that’s been specially selected by Lamborghini’s Centro Stile – the company’s design team that was established in 2004. Of course, the vehicle will be available in a whole host of different colours depending on what a customer desires. Embracing a new era, the Sián Roadster is fitted with ‘Oro Electrum’ wheels; a colour chosen by Lamborghini to signify a step toward electrification.

When it comes to performance, the Lamborghini Sián Roadster is a monster. The same itself in Bolognese dialect, meaning ‘flash’ or ‘lightening’ – a nod toward the company’s plans to electrify its fleet.

The car’s hybrid system is comprised of a 48-volt e-motor that delivers 25 kW (34 hp); it’s incorporated into the gearbox to provide immediate response and improved performance. The e-motor also supports low-speed manoeuvres such as reversing and parking with electric power.

The most interest aspect of the vehicle is that it has innovative supercapacitors. The technology means it stores ten times the power of a lithium-ion battery, while also remaining lightweight. Housed between the cockpit and rear-mounted engine, the electric system weighs only 34 kg – this makes it one of the most lightweight and efficient hybrid solutions available on the market.

On its own, the V12 engine dispatches 577 kW (785 hp) of power at 8,500 rpm, while the addition of the hybrid system takes this to a total of 602 kW (819 hp). As with other electrified vehicles, the Sián Roadster incorporates a regenerative braking system. However, unlike traditional Li-Ion battery-fitted vehicles that can be charged and discharged with the same power, the Sián’s energy storage system fully charges the battery every time the vehicle brakes.

As a result, Lamborghini claims that the vehicle is 10% faster than a car without this system. Here, the Sián Roadster will get to 62mph in 2.9s and cap out at 218 mph (350 km/h). To make things even smoother, the manufacturer has incorporated the hybrid system to work alongside the vehicle’s engine, whereby no torque power is lost in an upshift. Normally, deceleration and missing torque is felt during gear changes powered by a traditional combustion engine; the e-motor eliminates this uncomfortable jerking movement.

What do you make of the Lamborghini Sián Roadster? Should it have incorporated a large e-motor to dispatch even more power? Let us know in the comments below or via social media; we’re on: Facebook, Twitter, Instagram and YouTube.