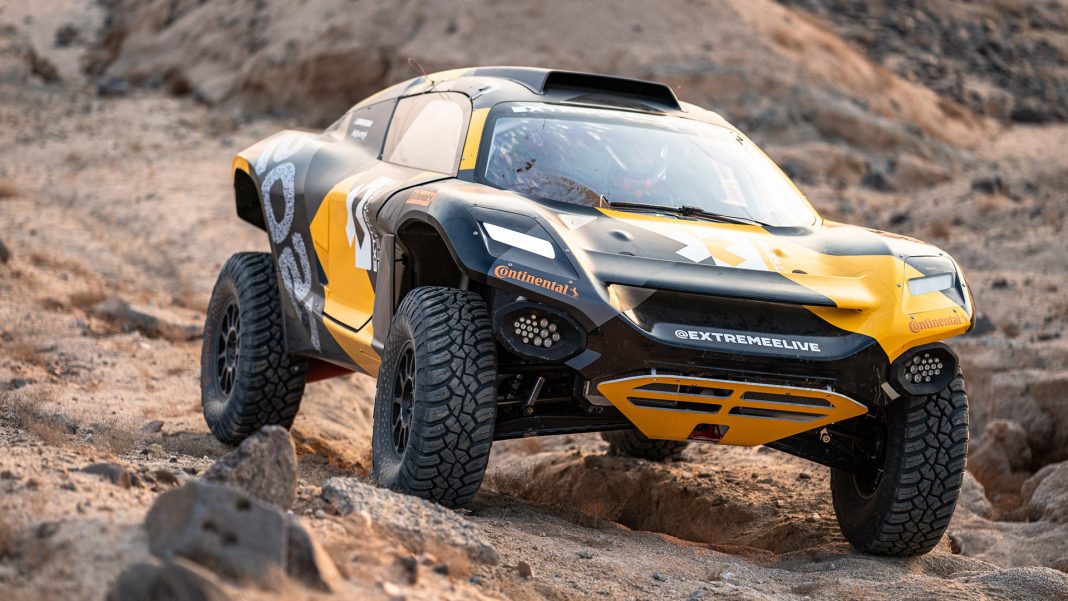 Continental, a German multinational that manufactures tyres, is a founding partner and, from 2021, the premium sponsor of Extreme E – a new all-electric, all-terrain motorsport.

Here, Continental will provide the tyres required for the Odyssey 21 SUV. These custom-made tyres will need to cope with environments as diverse as the Arctic, an island in the Indian Ocean, the desert and the tropics. Through this choice of locations, the racing series aims to highlight the challenges that climate change is already posing for each of these ecosystems.

One of the key aims of this race series is to raise awareness among spectators of the challenges facing the modern world, such as climate change, responsible interaction with the environment and the protection of important habitats. Sustainability is high on the agenda for both Continental and Extreme E.

To talk about the challenges faced with the design of such specialised tyres, TotallyEV gathered the thoughts of Nico Meier, Product Designer at Continental. 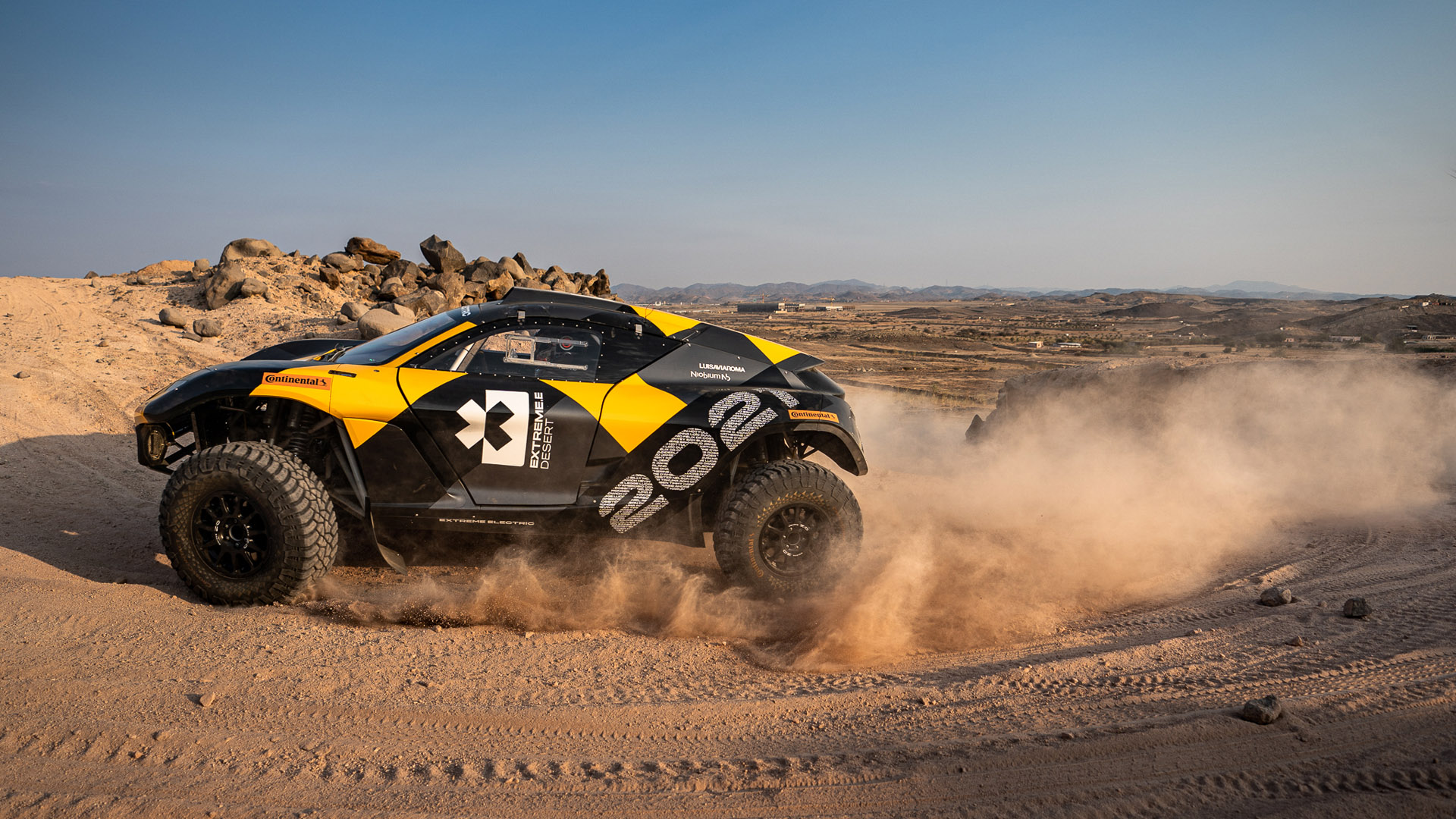 What distinguishes the Extreme E tyre from conventional tyres?

The tyre is exposed to much larger loads during the races than any other tyre. This is due firstly to the vehicles used. The specially-developed Odyssey 21, which is driven by all of the teams, is an extraordinary vehicle which is roughly similar to commercial SUVs in length, width and weight, but with its electrical equivalent of 550 HP has three times the torque of the Formula E Gen 2 vehicle.

Secondly, the races do not take place on standardized race tracks with comparable road surfaces, but in a natural environment with varying and very different surfaces: sand, scree, mud, ice, to name but a few. Added to this is the general race situation with extreme accelerations, violent braking manoeuvres, high speeds, even on tight corners, drift movements, and even jumps. 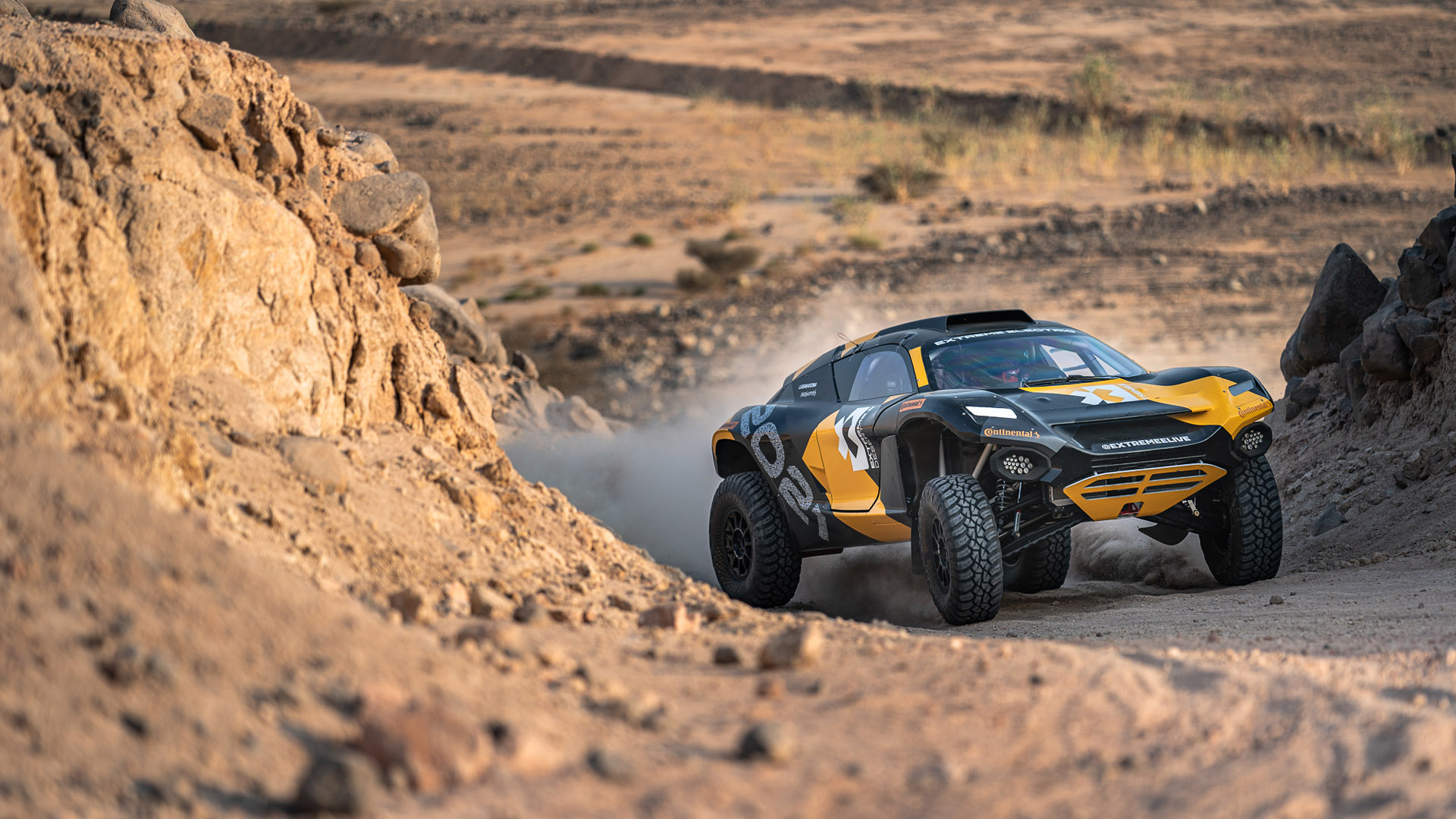 We are dealing with the biggest challenge that tyres in motorsport have to face. With the help of ContiPressureCheck technology, tyre data such as the air pressure and temperature should, therefore, be displayed on a screen in the cockpit during the race for the drivers, so they can adapt their driving style in extreme situations.

Is there a special tyre for every race?

No. Using the tried-and-tested Continental CrossContact, we have developed a tyre that should work at all event locations and in all conditions. So there’s no special desert tyre or a special polar tyre. Nor is it the intention to fit new tyres for every start. This would also not be in line with the sustainability requirements of the racing series. In other words, the tyres do not differ visually from one another. 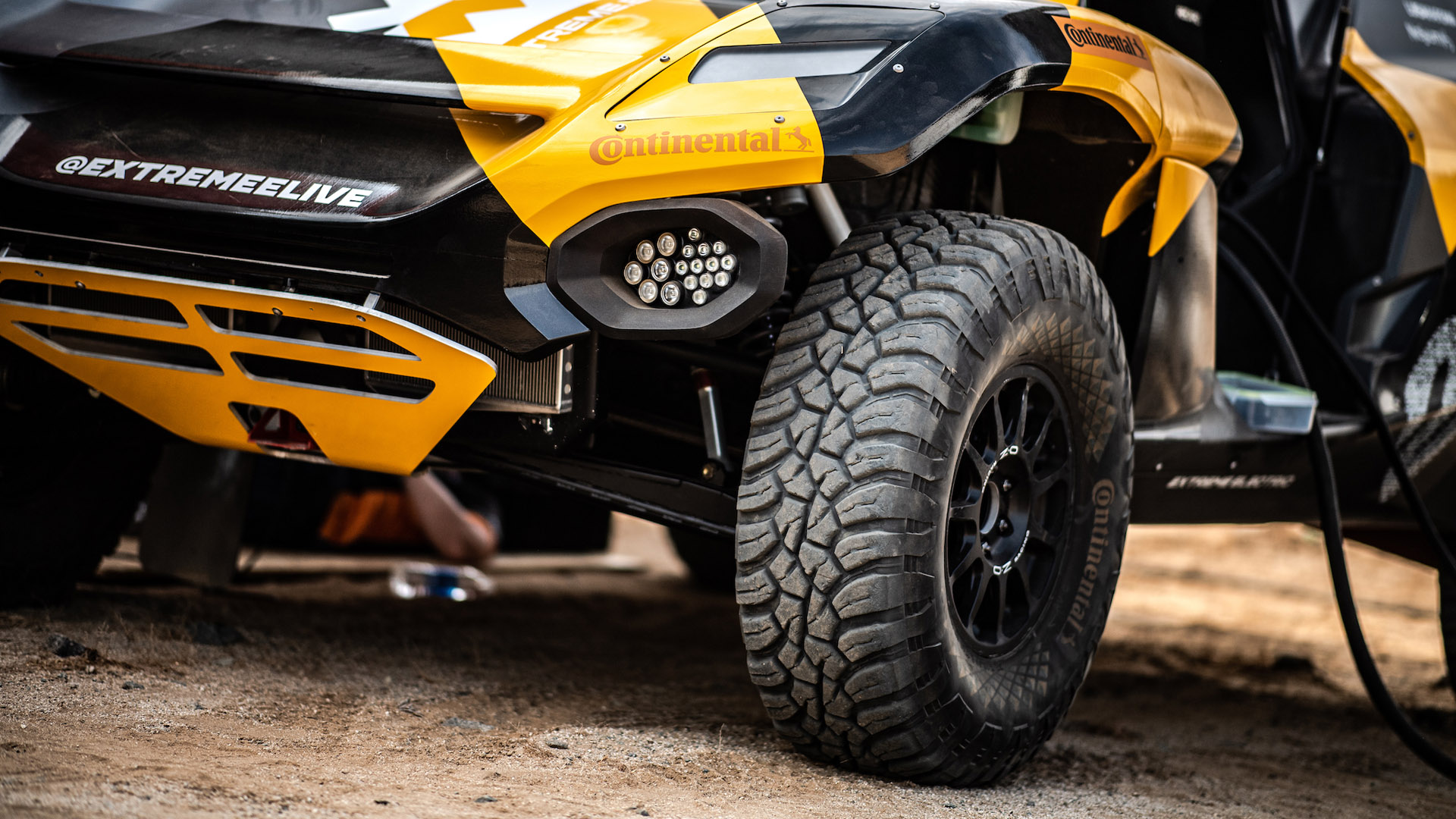 Are there legal requirements for the sidewall design for these tyres?

No. However, the tyres for the Extreme E racing series also have some important information on the edge of the rim – for example, “Only for racing,” so it is clear that this tyre cannot be purchased commercially. Since this inner ring is correspondingly small, we have more space for individual design. This is a rare stroke of luck that we have to capitalize on.

Why are the tyres’ sidewalls coloured?

The design of the tyre is divided into four zones. One zone contains the Continental logotype, another the product name CrossContact – both in Conti yellow. In between are zones with multi-coloured structures.

This colourfulness is a striking contrast to conventional tyres. We decided on this for two reasons. Firstly, unlike products in the retail sector, these tyres will rarely be seen at close proximity. Thanks to the coloured highlighting, we achieve improved visibility at greater distances and on digital media. 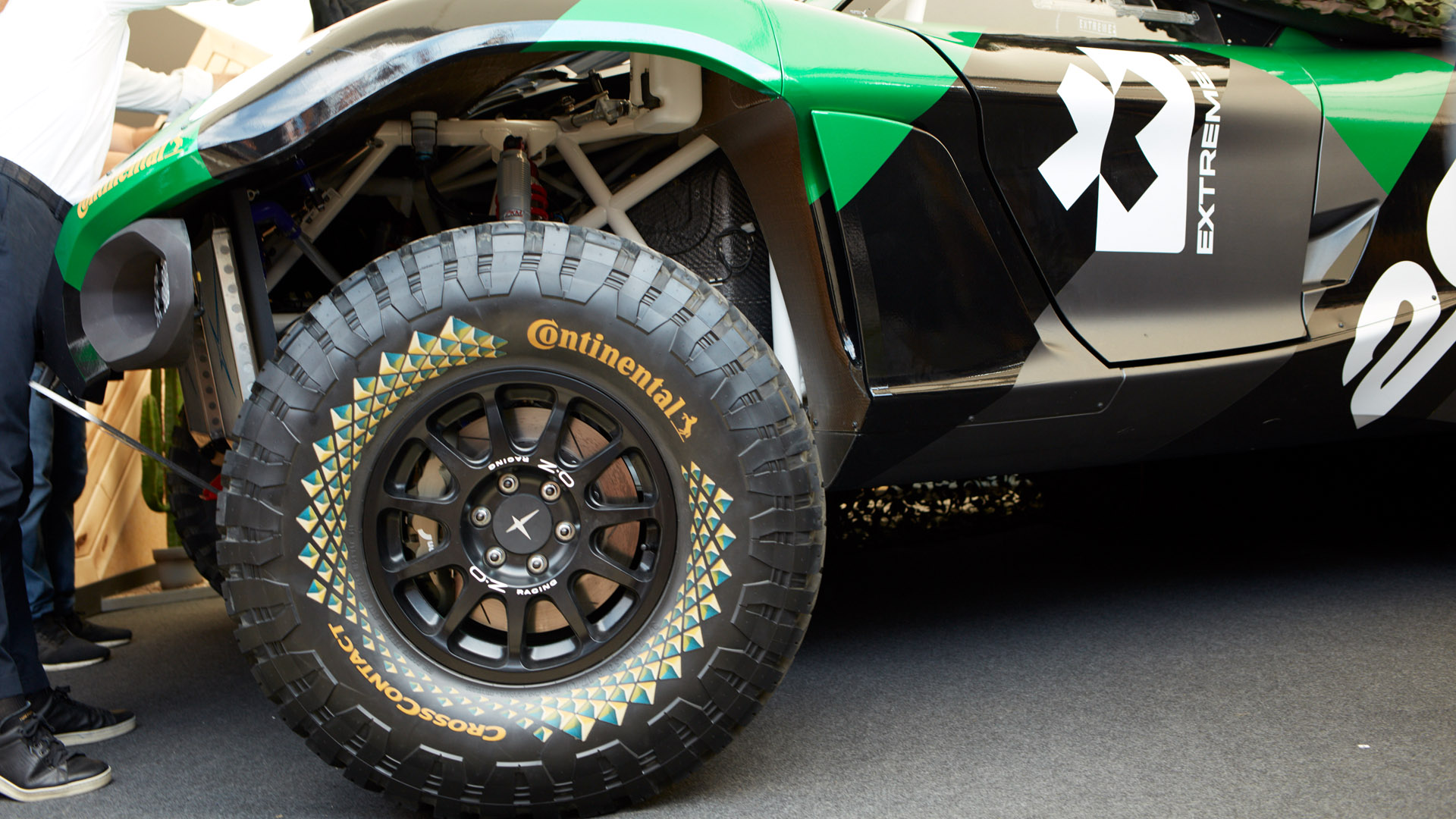 Secondly, with the colour of the design elements, we want to reflect the extreme and breathtaking natural landscapes in which the races are held. Green is the colour of the rainforest, yellow stands for desert sand and sandstone mountains, blue for the ocean, and white for the Arctic.

In addition, we have created a 3D effect that gives the elements the appearance of a protective layer – similar to a dragon’s skin or a lizard’s scale armour. In doing so, we highlight the extremely robust and resilient character of the tyre. During the races, the rotation creates a fascinating flow effect.

How did you ‘paint’ the tyres?

For this, we use post-cure technology. In this process, labels with coloured elements are printed onto the sidewall of the tyre afterwards. As a designer, this process provides me with all-new possibilities to visually present information about the product. A specially-developed colour mixture is used for the labels, which is characterized by strong adhesion to the tyre and is therefore well suited to the racing series. 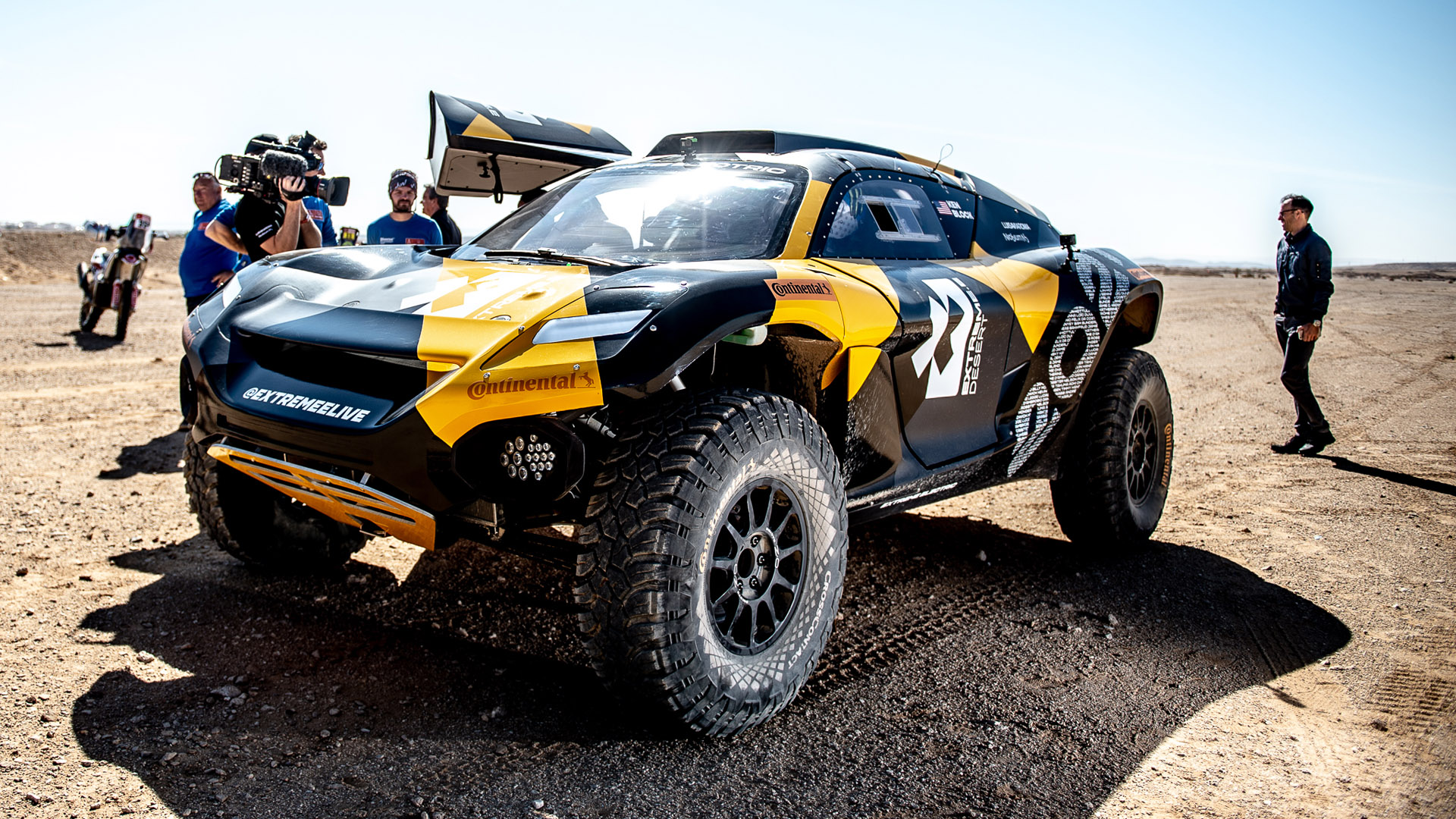 A racing tyre is subject to different loads than an ordinary tyre. Was this taken into account?

The extreme loads result in the tyre undergoing relatively high deformation during the race. This also results in significant temperatures. We cannot rule out the possibility that the design elements will be damaged. Especially since abrasions are also possible in the event of unintentional contact with the vehicle’s surroundings.

We are therefore developing special repair kits for the sidewall design which we can use to restore tyres that were only visually damaged during the races, on location between the individual stages. However, the final concept for this has not yet been determined. 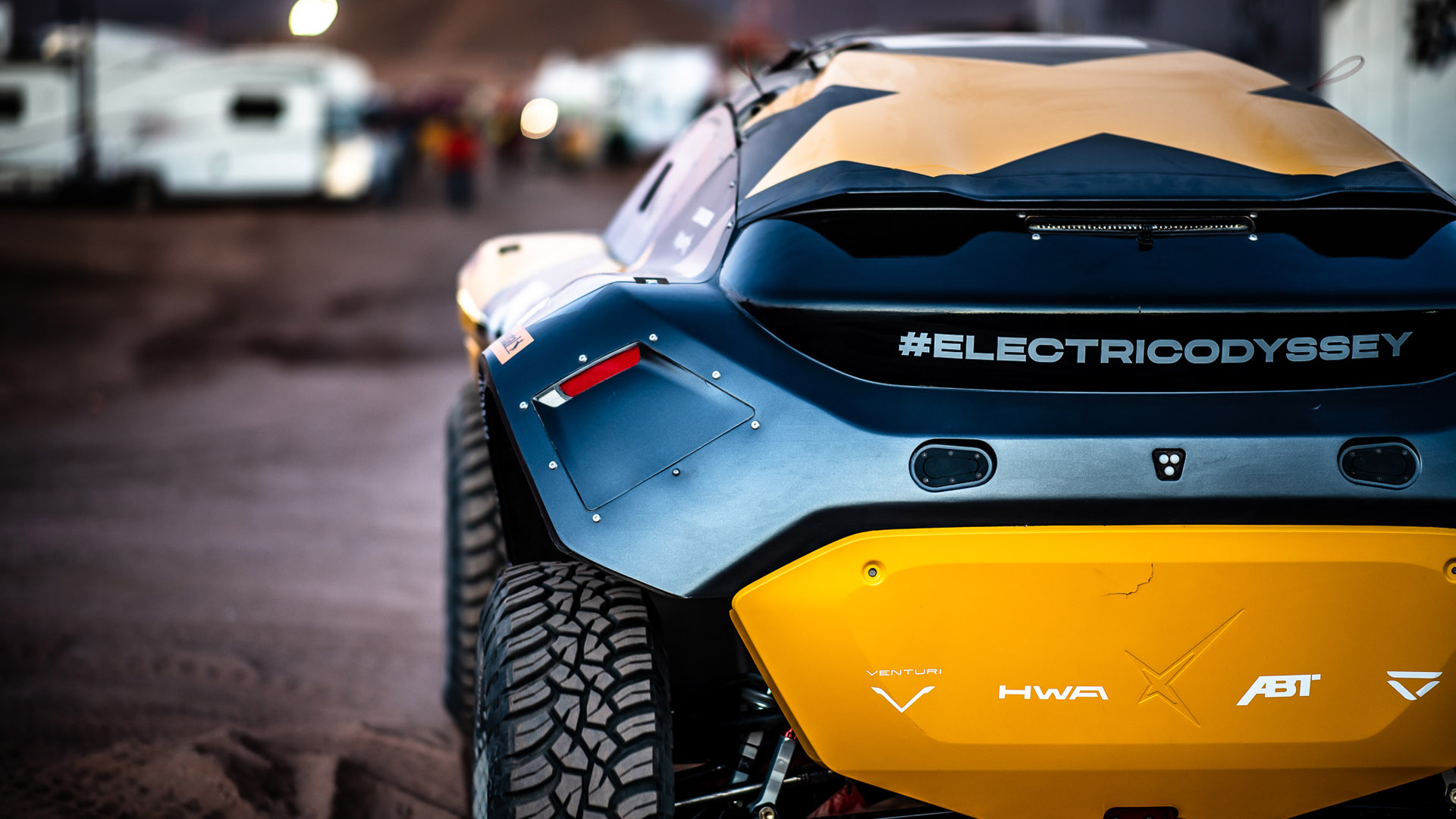 Could the colouring process also be used for conventional tyres?

Yes. That could be done without making any changes. We can imagine it being used in particular in “special interest” tyres, such as all-terrain tyres or racing tyres with road registration. Standard tyres will certainly also shine in plain black in the future.