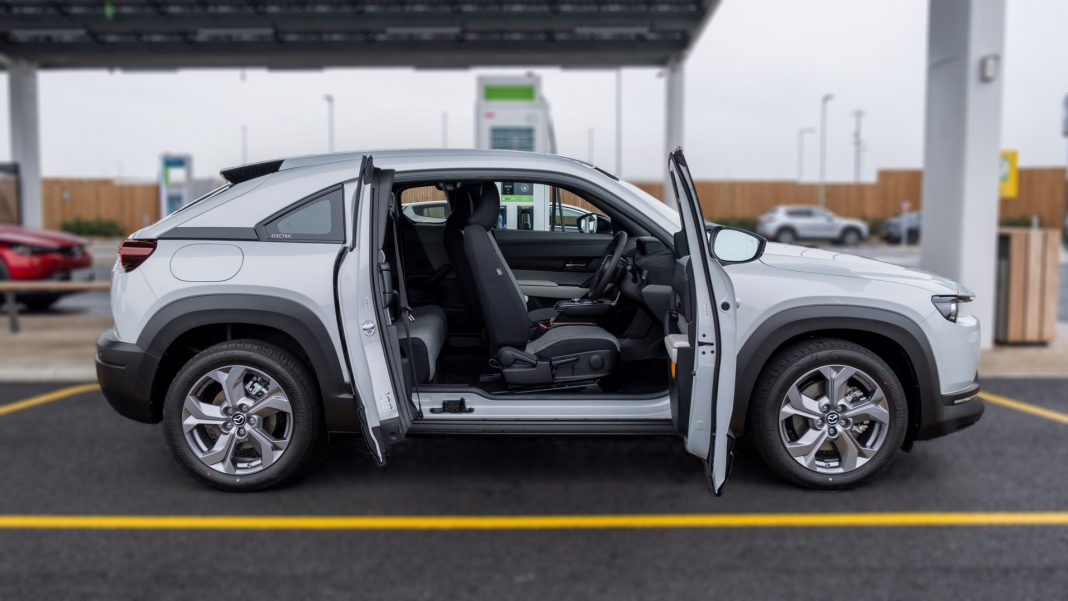 Mazda’s first mass-produced consumer electric vehicle, the MX-30, is aimed at those who are looking for an SUV that retains a driver’s feel – while we found it fun to drive, its lacklustre all-electric driving range of around 90 miles makes it hard to recommend.

It does, however, house an eight-speaker audio system in the £26,045 SE-L and 28,045 Sport Lux trims. Should you want a bit more oomph, you’ll need to upgrade to the GT Sport Tech that starts from £30,345 in order to have the 12-speaker Bose surround-sound system included; it adds a centre speaker in the dashboard, a speaker on each of the C-pillars and a subwoofer in the boot – this will affect the boot’s overall capacity. On review is the stock system.

To tinker with the vehicle’s audio settings, you’ll want to navigate to the appropriate ‘Sound Settings’ menu on the 8.8″ infotainment system. It’s quite astonishing that the stock system has a wide array of customisation – here are our optimal settings:

To connect up to the vehicle’s system, you can opt for a wired or wireless connection, both Apple CarPlay and Android Auto are supported over USB. As for Bluetooth, the infotainment system supports the AAC and SBC codecs.

As for media controls, they can be accessed through a physical knob found by the centre console or via a flurry of buttons found on the left-hand side of the steering wheel.

Elsewhere, there’s a fake engine sound that cannot be disabled through the infotainment system. This does detract from the overall listening experience, as when you’re driving at under 30mph you’ll hear an odd whooshing sound play through the vehicle’s audio system. You can hear how this sounds by skipping to the ‘Audio system’ segment on our video review of the MX-30.

In terms of its speaker configuration, the stock system houses eight audio drivers: a 3-litre woofer on either side of the front cowl (the area between the dashboard and windscreen), a 2.5cm tweeter and an 8cm speaker within the front doors. There’s another 8cm speaker mounted within the rear doors. Unlike the 12-speaker Bose system, the vehicle’s stock configuration doesn’t feature a subwoofer in the boot.

Unsurprisingly, this affects the sub-bass rumble, where its speakers have their work cut out throughout ‘Gimme That’ by Chris Brown. Indeed, there’s an inherent lack of extension in the lower frequency range. With that said, its front-mounted woofers do manage to portray a lively bassline, which makes the subwoofer-less system stand out from other in-car audio systems that also choose to omit the larger rear-mounted speaker.

It’s also got control and precision through the mid-bass tones; we’d even suggest adding a few notches to its bass EQ setting (60-250Hz) in order to further emphasise the frequency band. As a result, at the front of the cabin, you’ll be treated with a punchy mid-bass reproduction. However, the same couldn’t be said at the rear, where there are no dedicated woofer drivers to bolster that low-end hump.

As for the mids (250Hz-5kHz), they’re a touch recessed. Even if you were to add a few notches to the upper mid-range, you’ll still find the system lacks a convincing reproduction. Add too much to the various EQ bands and you’ll be left with a rather artificial-sounding system. We’d therefore recommend leaving them closer to zero or tailoring the settings to your own music taste.

Onto the highs, there’s a real zing at the top end. You might even find that it’s a bit too harsh in its default state, whereby we decreased the 10 and 16 kHz bands in order to soften that top-end sparkle. Take for example ‘Dervish’ by Celt Islam, where there’s a lot of presence in the high-end frequencies; here, the MX-30’s eight-speaker system becomes a bit fatiguing on the ears especially if you have it cranked up to a louder volume. Note, however, there are no dedicated tweeters at the rear of the cabin, and as such those sat at the back won’t be subject to the same level of clarity in this frequency range.

Similarly at the rear, there’s very little sense of width and depth, where the soundstage is affected by the use of a singular driver unit housed within each door. Thankfully that’s not the same at the front, where front occupants will find themselves impressed by the stock system’s ability to reproduce a spacious sound. Instrument separation, on the other hand, could be improved where we found the speakers failed to eloquently differentiate between different tones. 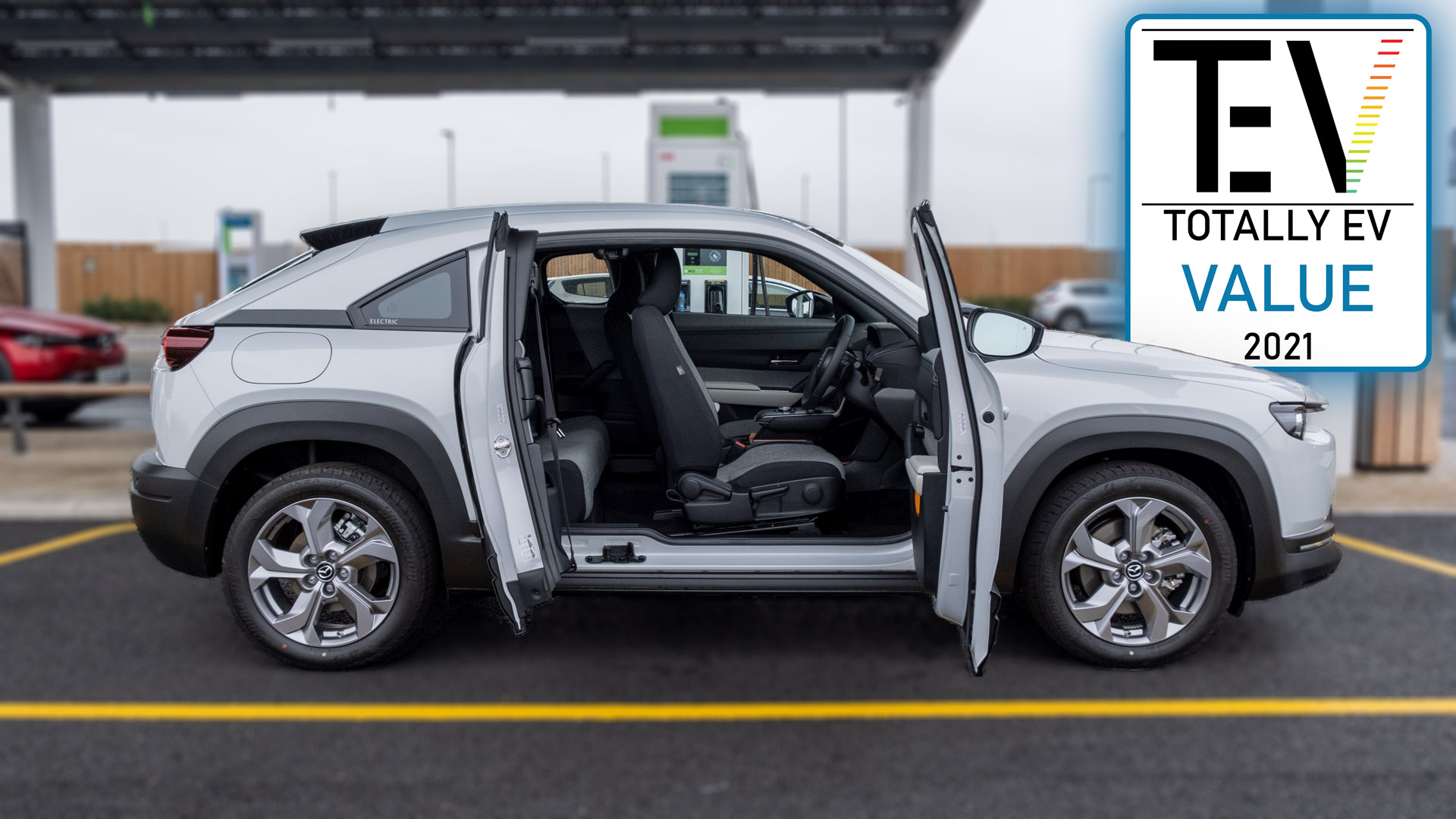 While the Mazda MX-30’s audio system isn’t quite perfect, it’s certainly impressive given it comes as standard in both the SE-L and Sport Lux trims. Should you want a more prolonged bassline and better instrument separation, we’d suggest upgrading to the GT Sport Tech trim in order to have the 12-speaker Bose system.

Given the eight speakers come included with the standard level trims, we find most consumers will be impressed by its performance and as such, the system receives TotallyEV’s Value award.