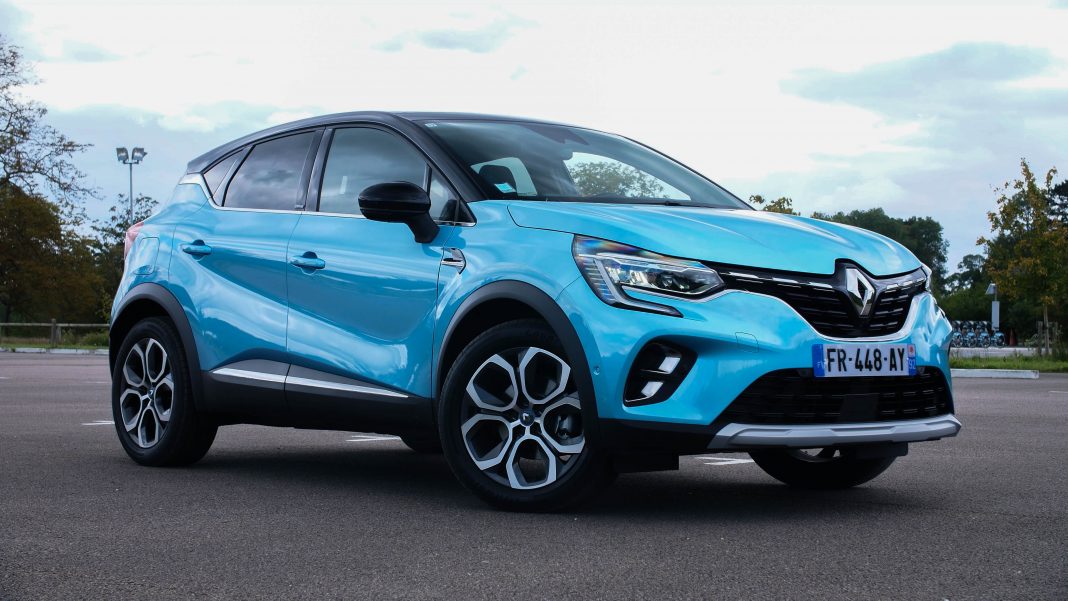 Renault’s compact SUV, the Captur, now has a hybrid sibling – the E-Tech Captur. The French manufacturer’s latest Sport Utility Vehicle starts from £30,495 for the ‘S Edition’. An additional £500 nets you a few styling tweaks for the ‘E-Tech Launch Edition’.

TotallyEV was invited for an exclusive first drive of Renault’s plug-in hybrid, which has a lot to live up to, given the manufacturer’s standard Captur is its best selling model in the UK.

Both models feature the same hybrid powertrain, which consist of a 1.6-litre four-cylinder naturally aspirated petrol engine, and two electric motors: a High Voltage Starter Generator (HSG) and a larger ‘e-motor’ that powers the 9.8KWh battery pack, which resides under the rear seats; it’ll net up to 30 miles of all-electric driving range.

In conjunction with its petrol engine, the SUV has 119 kW (160hp) of disposable power, with 144 Nm of torque from the ICE unit, and a further 205 Nm from Renault’s acclaimed ‘e-motor’.

Performance isn’t normally the main talking point for an SUV of its class, but thanks to this combination, it’ll do 0-62mph in 10.1s, meaning you can make a quick gateway at the lights. Top speed is limited to 107mph, which is plentiful for a family-sized vehicle. 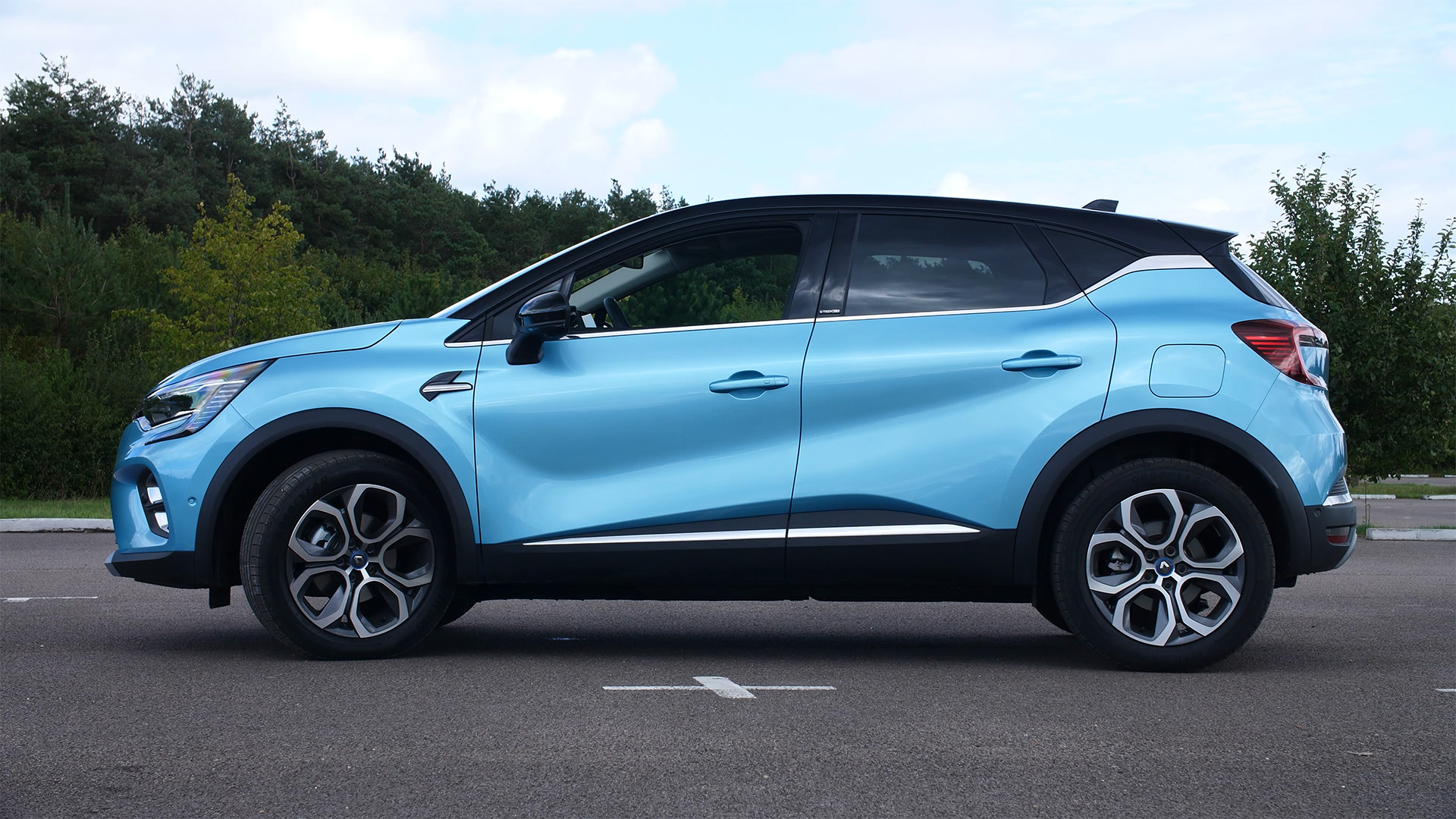 The Renault Captur E-Tech’s transmission has a new clutchless ‘dog box’ automatic gearbox, which makes use of the vehicle’s dual-electric motors. As a result, there are five gears that are made available by the SUV’s petrol engine and a further three that are accessible from the vehicle’s electric motor. Think of it as a hybrid gearbox.

Unfortunately, this does mean that there is no way to control what gear you are in; you can still, understandably, choose between the three drive modes: Drive, Neutral or Reverse. 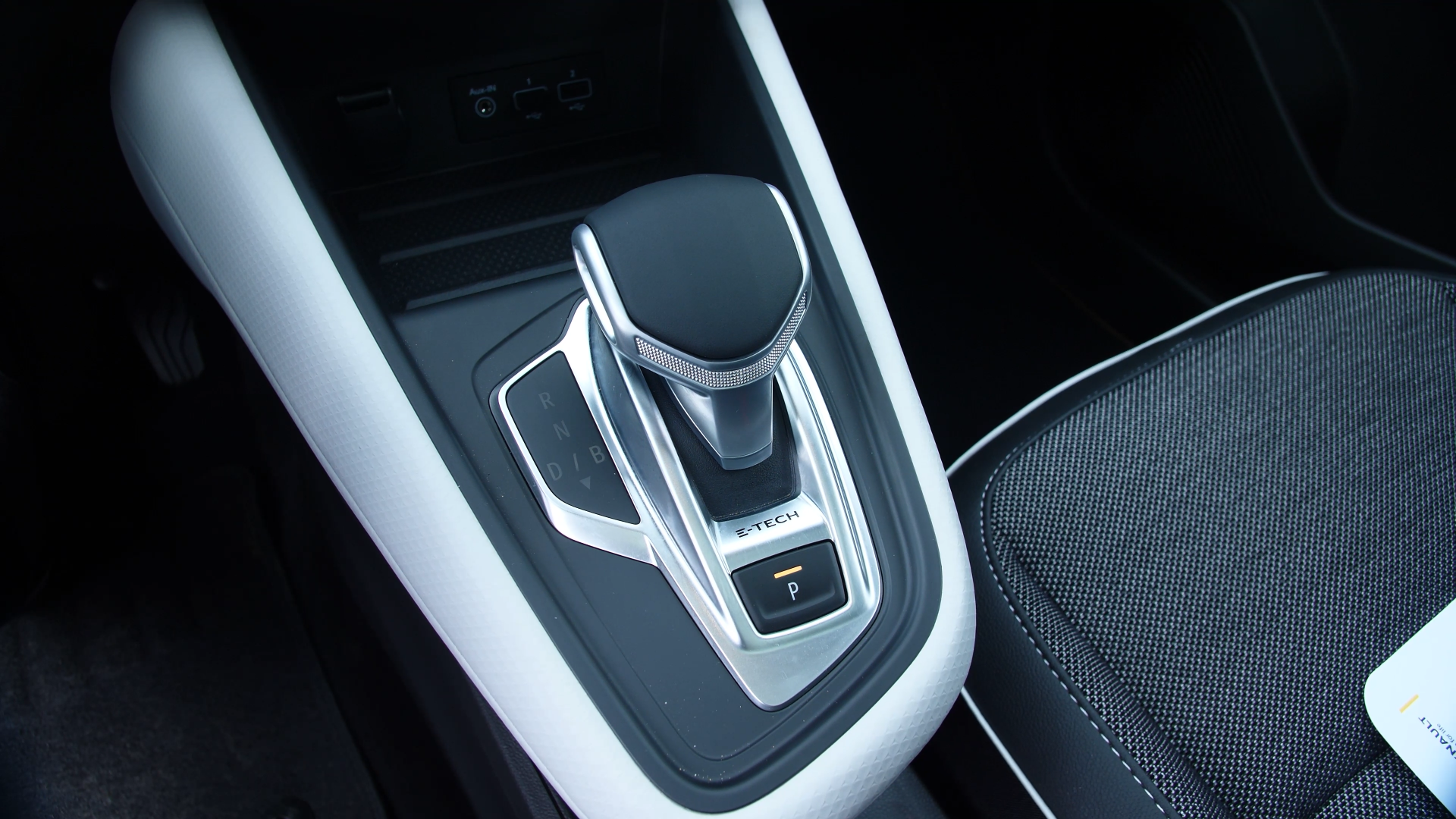 Much like its competitors, there is ‘B-Mode’; this enables regenerative braking to allow you to aggressively harvest energy from both its electric motors to charge the vehicle’s battery. It will only go down to 4mph, but it means that for the majority of inner-city and in-traffic driving, you can operate the vehicle with a one-pedal approach.

All of that adds up to a remarkable 188 MPG combined efficiency, meaning just 34-36g/km of CO2 is produced over the WLTP cycle. That means you pay £0 tax in the first year, and just 10% Benefit-In-Kind tax.

Since this is a plug-in hybrid, you do have an extra fuel filler door for the Type 2 charging port, which is located at the side of the vehicle. The Captur will only be able to charge at a rate of up to 3.6 kW, or just above what a standard wall plug can provide.

Happily, though, Renault offers a free BP Chargemaster wall box when you buy an E-Tech Hybrid. The idea, here, is to keep the car topped up when you are at home. If you do run out of battery, the petrol engine can help to charge while driving; a smart feature that’s made possible thanks to its HSG system.

Practicality is a strong point for the Captur E-Tech. It’s spacious up at the front, with a new touchscreen infotainment display which supports both Android Auto and Apple CarPlay as well as Renault’s own built-in navigation system. The E-Tech versions get a 10” TFT gauge cluster display and revised visuals showing battery level and regen information.

In the rear, you get sliding and folding seats to either maximise passenger or usable boot space; the latter has little over 400 litres of usable space, making it easy to fit anything from groceries to pets. Both the front and rear seats are made of a comfortable fabric design. 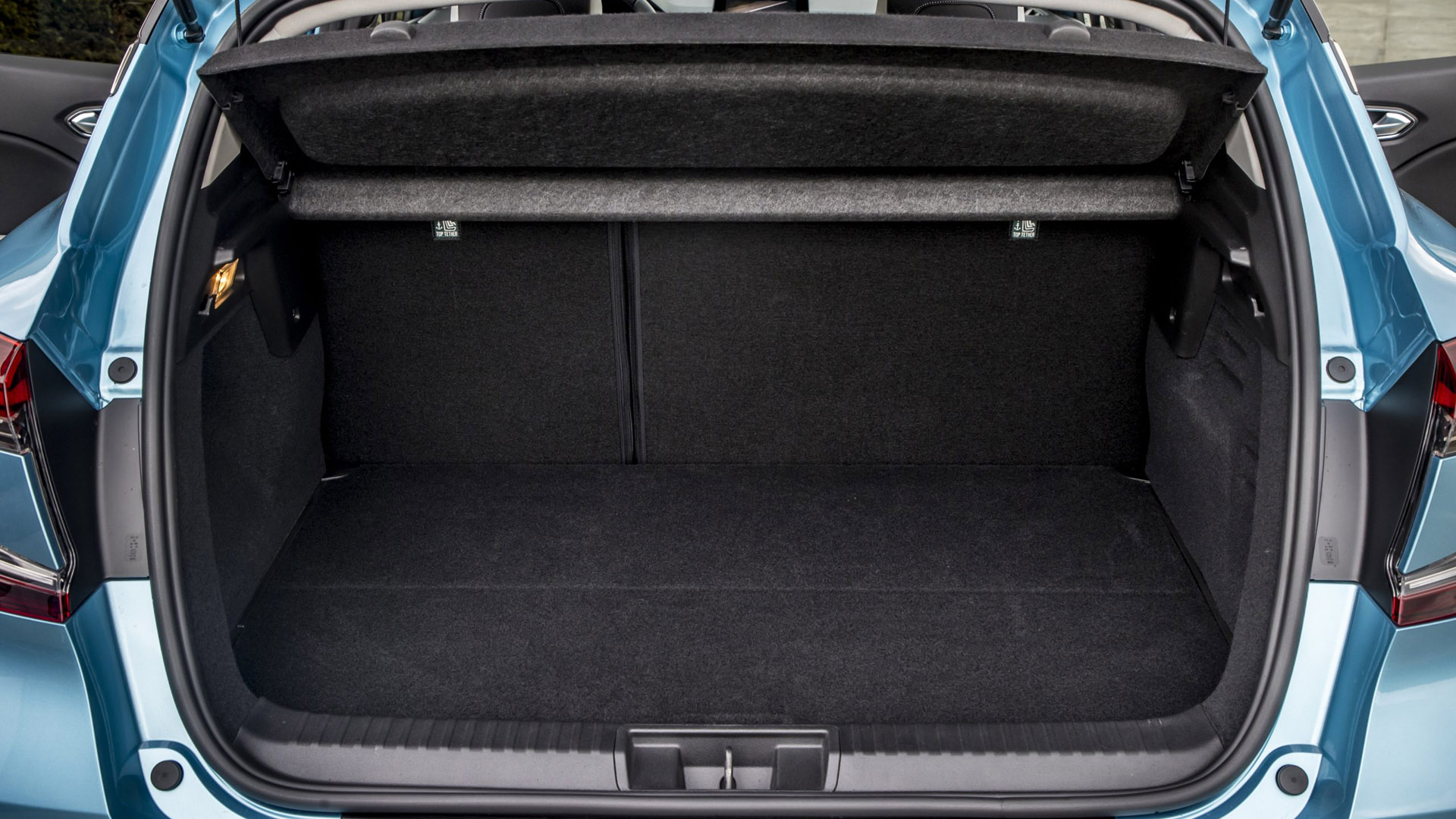 Ride quality is, as you might expect for an SUV, excellent. You’ll feel like you are driving on a cloud, and especially thanks to the incredibly smooth power delivery, it glides along the road and floats over bumps.

As someone, however, who prefers to feel the road, it did feel a little disconcerting how disconnected I felt from the road. The steering, thanks to its electric power steering rack, is incredibly light. At slow speeds or at a standstill it is effortless. It does get a little heavier as you drive but it’s still extremely easy to execute complex manoeuvres. 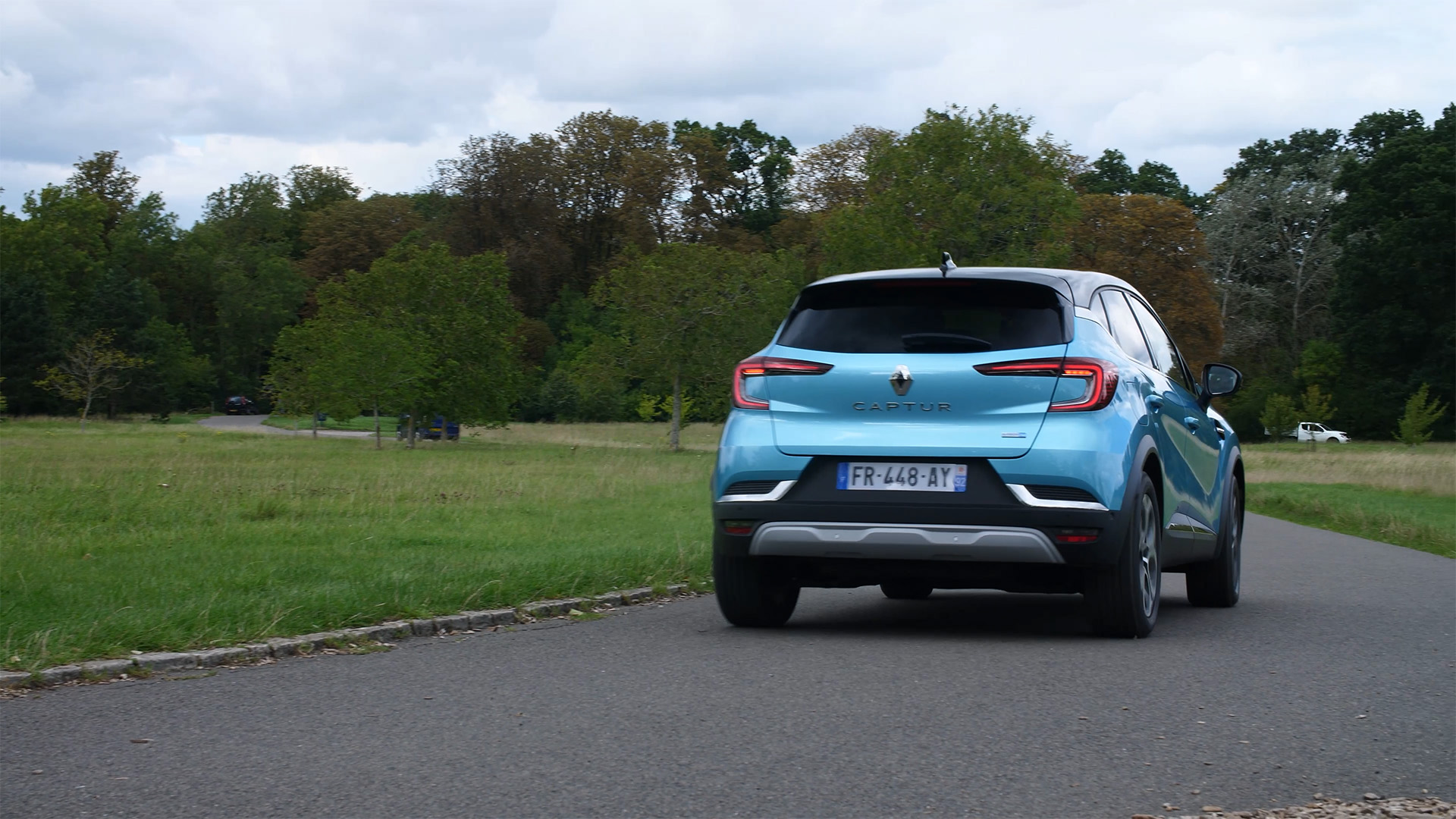 One advantage of the Captur over the new Megane and Clio that Renault showcased at this event, is that there is significantly less road noise inside the cabin; it’s much quieter than the other two, which when coupled with the floaty suspension made for a very isolated and removed experience. In this type of car, that’s a good thing. It felt a little more refined and luxurious over the other two, despite the Megane using the exact same engine and battery configuration.

Overall, the Captur seems well-designed for the vehicle’s target audience. It’s luxurious and isolated, while still being efficient, practical and nippy. With that said, these are just our initial thoughts, so if you would like to see a full review of the new E-Tech Captur do let us know in the comments below or via social media – we’re on: YouTube, Instagram, Facebook, Twitter and LinkedIn.