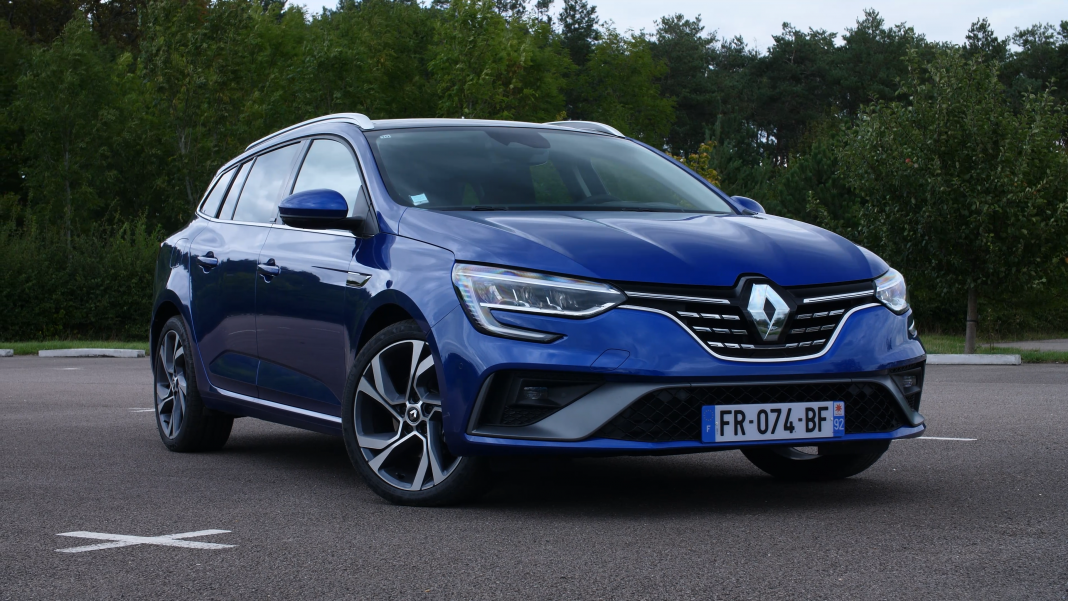 Earlier this year, Renault announced its new Megane E-Tech, a hybrid estate – the Sport Touring. At launch, the estate comes in two different models: the ‘Iconic’ that starts at £30,685, and the ‘R.S. Line’ that costs £2,000 more for added Alcantara bucket seats, larger set of displays and 17” Monthlery diamond-cut alloy wheels. TotallyEV got an exclusive first drive of the latter vehicle.

The launch editions feature the same hybrid powertrain, consisting of a 1.6-litre four-cylinder petrol engine, and two electric motors. One of these motors is the manufacturer’s High Voltage Starter Generator (HSG), whereas the larger ‘e-motor’ feeds from the car’s 9.8 kWh battery pack to deliver up to 30 miles of all-electric range. 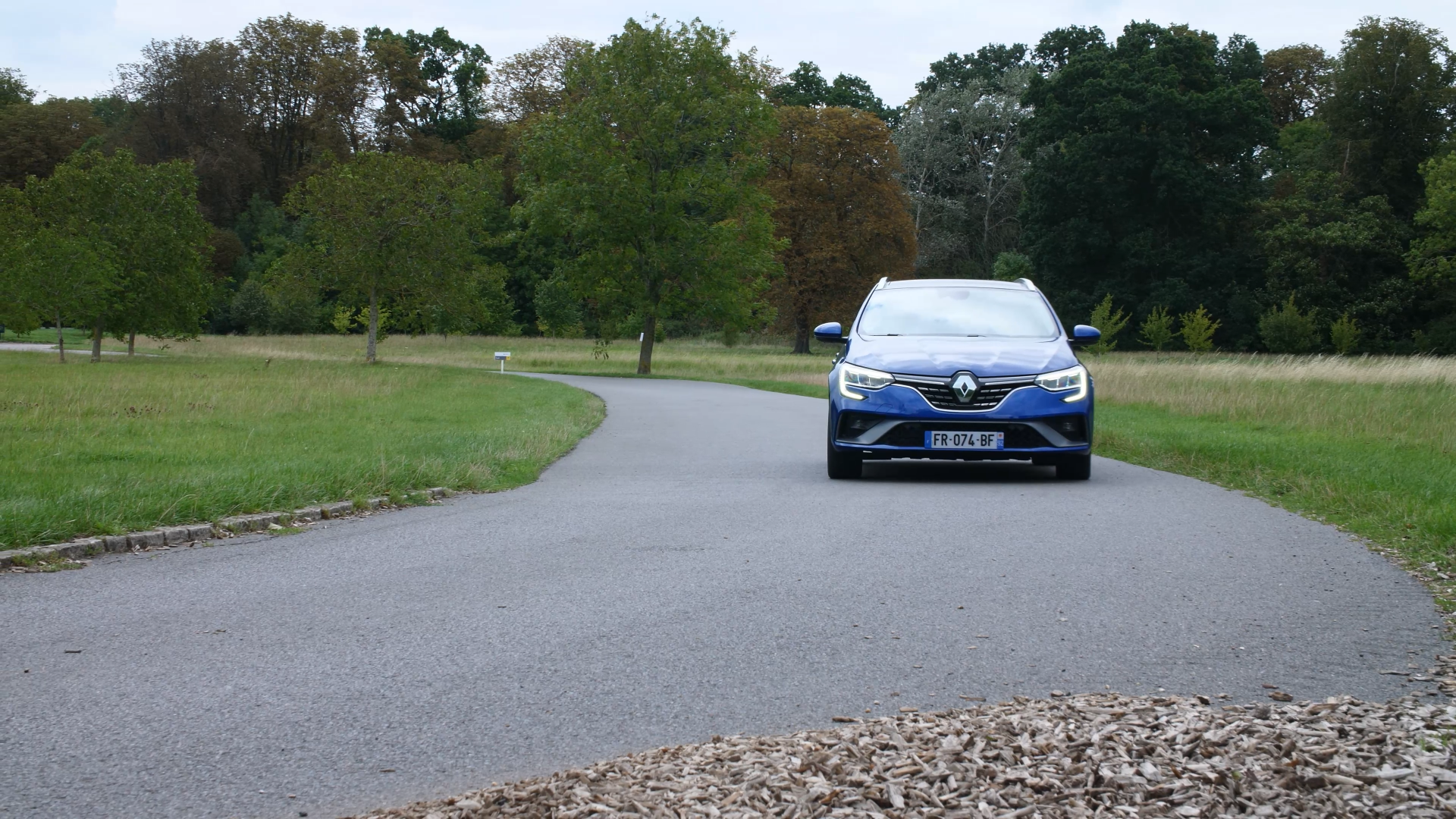 The combination of both the petrol engine and electric motor net 119 kW (160hp) of total power, where 144 Nm of torque is available from the engine, and a further 205 Nm from the motor. It’ll get to 62mph from a standstill in 9.8s, with top speed limited to 111mph.

Much like the other new E-Tech models, the Megane is quick to get off-the-line, however, you might feel a little disconnected from the car due to its electric power steering rack. On the plus side, the car is easy to manoeuvre.

As for its transmission, Renault uses a hybrid gearbox, which is the manufacturer’s new clutchless ‘dog box’. The automatic gearbox makes use of the dual electric motors to shift through its five gears, and a further three for the electric motor.

Unfortunately, there is a limitation: you can’t shift through the gears – it’s on full auto all of the time. Naturally one can select between Drive, Neutral and Reverse. 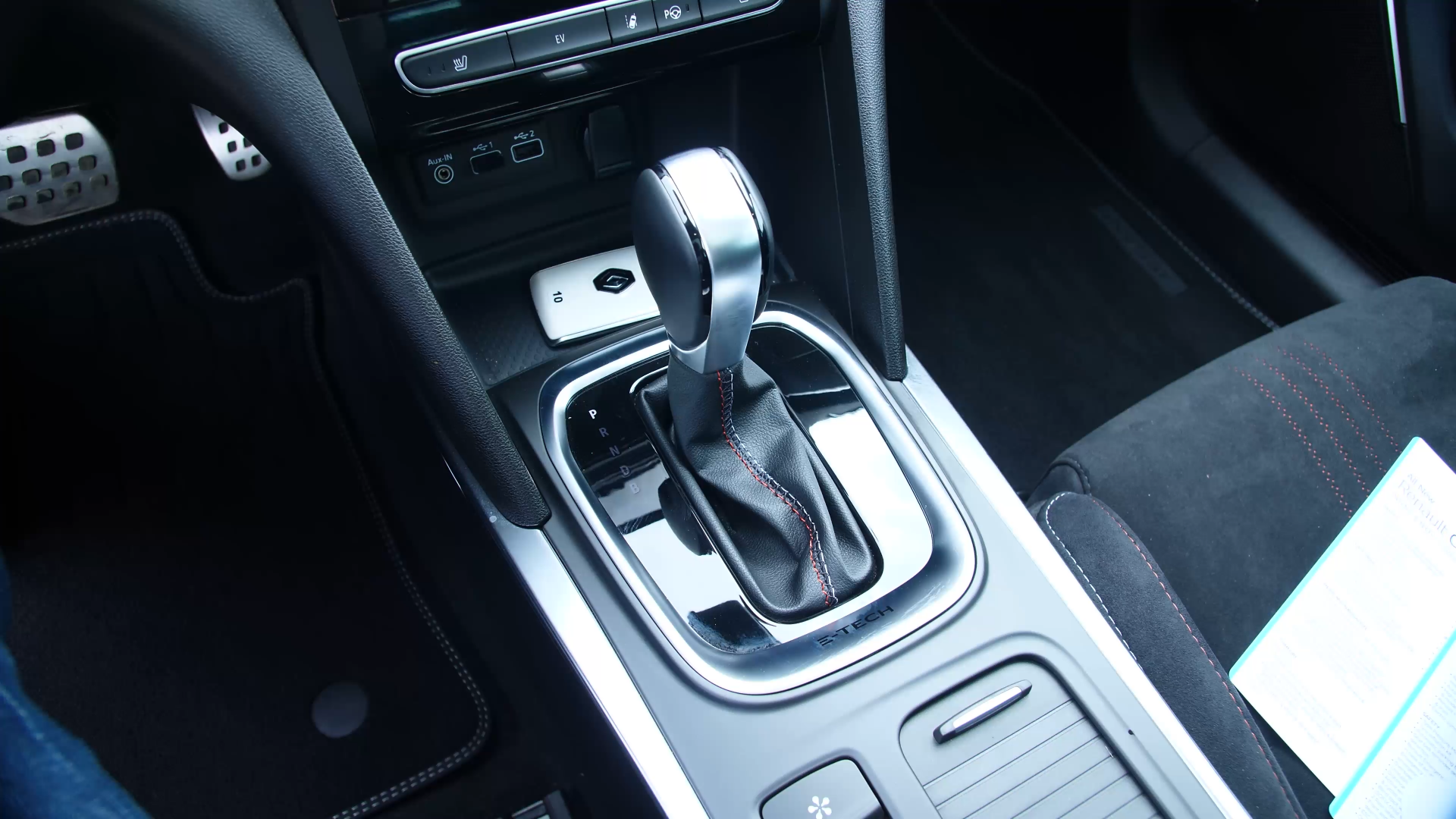 There is another driving mode, too: ‘B-Mode’, which is aimed at recouping as much energy as possible into the car’s battery pack. This essentially allows you to drive with one pedal, only. It’s worth knowing that this will go down till 4 mph, at which point you’ll need to use your brake pedal to bring the car to a complete stop.

The clutchless gearbox is very smooth in its regular mode when you’re pottering around town, and clocking up some miles on the motorway. Drive it more aggressively around some country roads, however, and the car fumbles. Here, the car holds onto a gear for such a prolonged amount of time, that it sounds as if the pistons are dancing on the bonnet and only upshift when you lift off the accelerator. 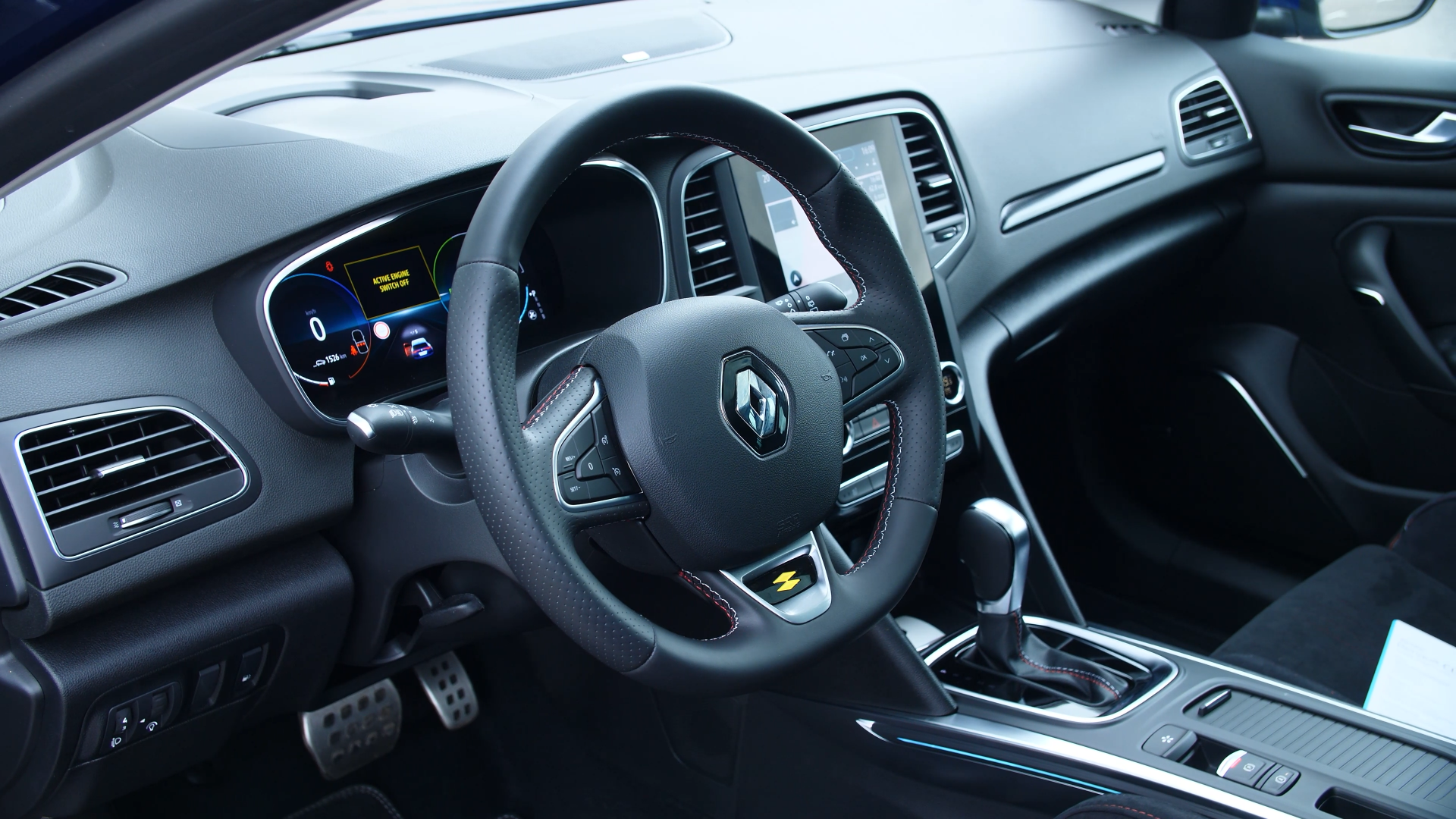 Aside from its driving experience, the car boasts an incredible 217 MPG combined efficiency, meaning just 30g/km CO2 is produced over the WLTP cycle. That means you pay £0 tax in the first year and just 10% Benefit-In-Kind tax. Brilliant.

Since it’s a plug-in hybrid, you do have an extra fuel filler door for the Type 2 charging port that’s located at the side of the vehicle. The Megane will charge at up to 3.6 kW, however, so charge times aren’t fast. To rectify this, Renault offers a free BP Chargemaster wall box when you buy an E-Tech Hybrid, with the idea being that one can keep the car topped up when you’re at home. Of course, if you do run out of battery, the petrol engine kicks in and will even charge it while driving. 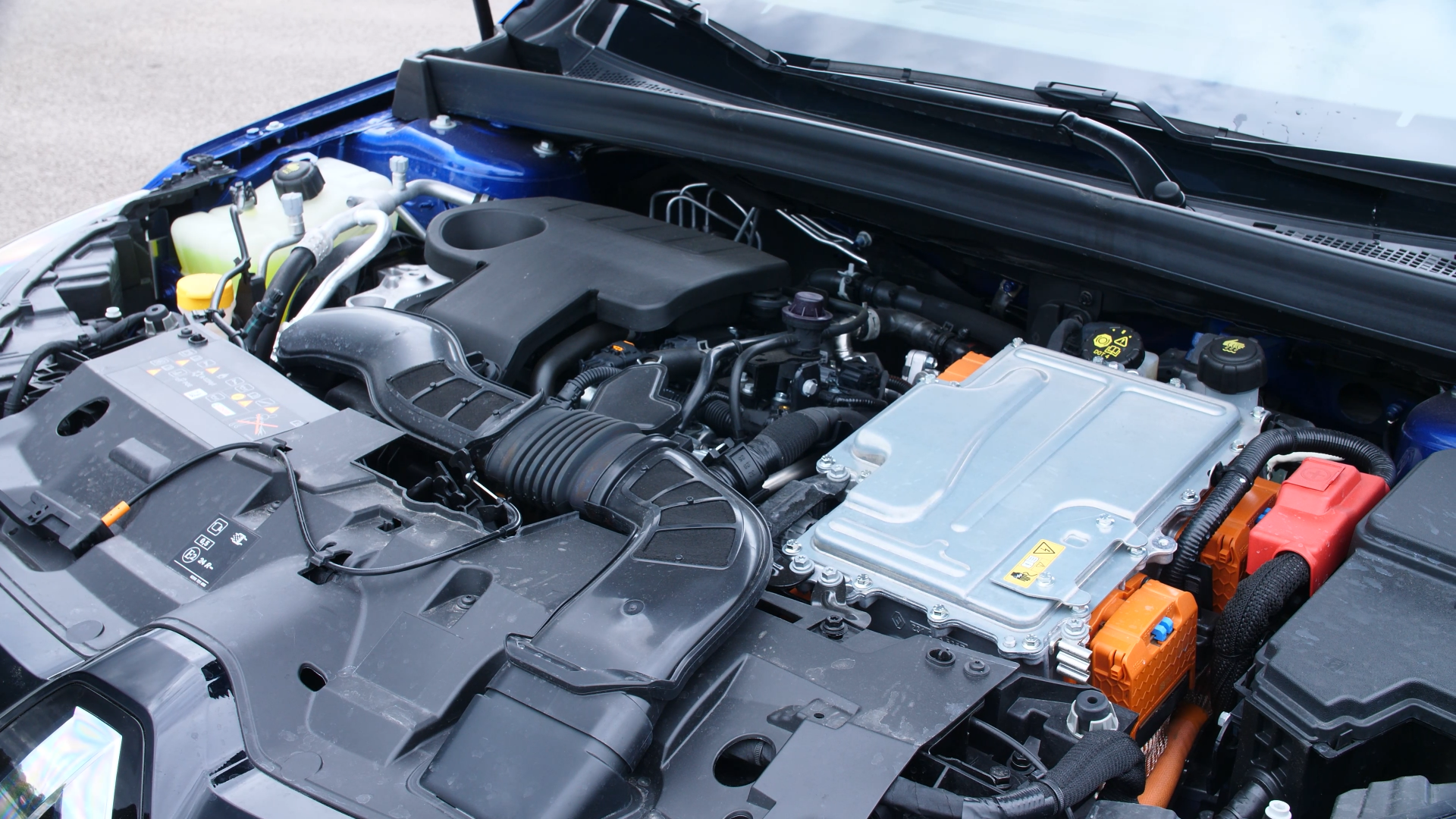 Practicality is great in the Megane Sport Touring. You have 447 litres of boot space, where the manufacturer claims you can fit two mountain bikes and gear in the back if you put the rear seats down. Not bad.

Headroom and legroom are plentiful both at the front and rear of the vehicle; a 6-foot (182cm) adult won’t have any issues.

When it comes to comfort, the R.S. Line has rather tight-fitting front seats, so you’ll have to be fairly slender to be truly comfortable in them. As for the ride quality, the suspension is rather soft, which makes for a comfortable drive; however, there is a small amount of body roll, when going at speeds around corners.

There is more road noise in the cabin than it’s SUV counterpart, the Captur E-Tech, but it’s not an unpleasant experience.

On the whole, the Renault Megane E-Tech is an appealing car for those looking for a soft, non-sporty daily driver. These are, of course, just our first impressions of the estate, so if you would like to see a full review do let us know in the comments section below or via social media – we’re on: YouTube, Instagram, Facebook, Twitter and LinkedIn.