The BMW iNext concept car was revealed at the 2018 Paris Motor Show, where it raised quite a few eyebrows with its oversized kidney grilles and radically different exterior design. Fast forward to late 2020, the all-electric SUV became a production car, with it being available to order in 2021 and offered as a 2022 model.

Read next: BMW i4 first drive: The best electric BMW?

At the time of writing, there are two models within the range, which are each available in two trims – the xDrive40 and the xDrive50 come in both ‘Sport’ and ‘M Sport’; the latter adds some extra sporty flair, whereby it has a more aggressive look. 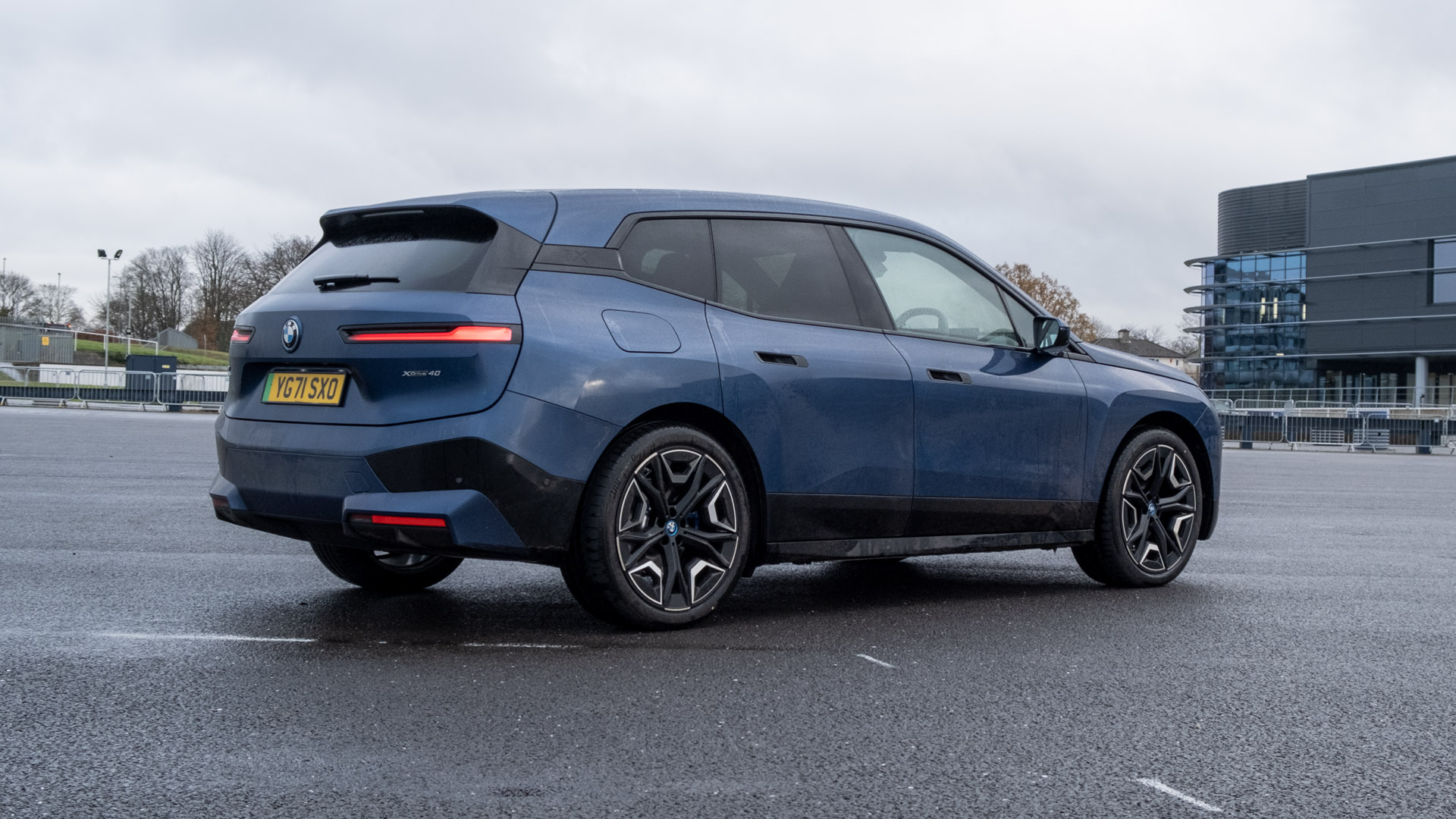 No matter which model or trim level you choose, the exterior design will divide opinion. Much like the iNext concept, the iX houses an oversized and in our opinion, a rather hideous-looking front grille that’ll draw anyone’s attention away from the rest of the vehicle’s frontal characteristics. Its side profile is similarly different, whereby it has a boxy design around the wheel arches and door handles that are concealed within the vehicle’s frame.

Thankfully, the rear of the vehicle is more in-line with the rest of the BMW’s fleet, with stylish, elongated taillights and a small overarching spoiler that bolsters its sporty flair. As for the alloys, there are a choice of different styles with 21″ coming as standard, and 22″ available as an option. Pictured are the 22″ 1020 Bi-colour air performance alloys that cost an additional £1,000 with an M Sport configuration.

As for colour options, it depends on which trim level you pick – both the xDrive 40 and 50 have the same options, but the M Sport adds extra colour options as opposed to the Sport variant. Indeed, in the Sport trim, the non-metallic ‘Alpine White’ comes as standard. The metallic ‘Black Sapphire’, ‘Sophisto Grey’, ‘Blue Ridge Mountain’ or pictured ‘Phytonic Blue’ cost an additional £795. The M Sport, adds a £795 ‘Mineral White’ finish to its metallic offerings, and ‘Storm Bay’ and ‘Aventurine Red’, which both cost a whopping £1,890.

The vehicle’s quirkiness doesn’t stop with its exterior design, as its interior is similarly different. Take, for example, its steering wheel that uses a hexagonal design – it’s the first BMW to utilise this unconventional form factor. Look around the cabin and you’ll also notice that the German automaker has replaced the vehicle’s door handles with single-press release buttons; much like the ones found in the Tesla Model 3, we find these rather intuitive, as very little effort is required to get out of the vehicle.

By the front doors, you’ll also find the electronic seat adjustment buttons and by the driver’s side, a flurry of controls to adjust the side-view mirrors and windows. Numerous physical controls also reside by the overarching centre console unit, whereby BMW has also retained the iDrive rotary dial. Its design is similar to that of the i3 (or i3s) – the centre console doesn’t physically connect up to the dashboard leaving an ample amount of room between the two front occupants, which allows one to use the space to transport a rucksack, handbag or a few shopping bags.

Speaking of which, the iX has plenty of storage capacity within the cabin. There’s the glove compartment, the four door bins, the large centre armrest compartment and an intriguingly-designed area by the front of the centre console, which allows you to place two coffee cups and a smartphone. Here, you’ll also find two USB Type-C ports and a 12V socket. At the rear of the cabin, there’s a set of cupholders within the rear armrest area and two USB Type-C ports found at the rear of each of the front seats; this makes it convenient to charge a device while in use, but less convenient if your rear occupants want to charge and store their electronic devices within the door bins.

As for headroom and legroom, it’s plentiful both and the front and rear of the cabin, where even 6-foot 7-inches (200cm) individuals will fit with ease.

When it comes to the boot, BMW offers 500 litres with the seats up and 1,750 litres when they’re propped down. Here, the automaker has included 40:20:40 rear split-folding seats, which makes it handy to transport elongated goods. Hooks, anchor points and a large underfloor storage compartment make it handy to store valuables or the vehicle’s charging cables. There is, however, no frunk or front storage area under the bonnet.

Moving onto technology, the iX is quite similar to the BMW i4, whereby it has a curved 14.9″ infotainment screen that seamlessly feeds into a 12.3″ instrument cluster. The screens are vivid, responsive and support both wired and wireless Android Auto and Apple CarPlay. Better still, the instrument cluster and Head-Up Display (HUD), which features as standard in all trim levels, integrate navigation data from these third-party operating systems.

As for audio, the iX houses an 18-speaker 655-Watt Harman Kardon sound system with a 7-band equaliser as standard. Should you want to bolster the experience, the Bowers & Wilkins Diamond Surround Sound System is available as an option within the ‘Technology Plus Pack’ for an eye-watering £5,000. Alongside a few other options, the upgraded audio system has a whopping 30 audio drivers, which combined output 1,615 Watts. The latter configuration promises an ‘intensive 4D audio experience’ as it houses speakers within the front seats and head restraints.

Having put the Harman Kardon system through its paces, we find the stock audio system will suffice for most consumers as it’s impressive across the frequency range. Audiophiles, however, might be tempted to get the B&W system as its superior speaker configuration results in a jaw-dropping experience.

Now while its interior design and exterior aesthetics will differ from other BMW vehicles on the market, we feel that most consumers will be left surprised by the automaker’s tuning of the iX – both in a positive and negative sense.

First of all, no matter if you opt for the xDrive40 or xDrive50, you’ll find two electric motors housed within the all-electric SUV. The former outputs 240 kW (326 hp) of power and 630 Nm of torque, while the latter offers 385 kW (523 hp) of power and 765 Nm of torque. We had the xDrive40 M Sport tested from 0-60mph in 5.9 seconds. Top speed is electronically limited to 124mph. Not too shabby, but equally not overly impressive for a vehicle that has a dual electric motor configuration. For example, the far cheaper Volvo XC40 Recharge Twin Pro achieved this feat in a blistering 4.51 seconds. 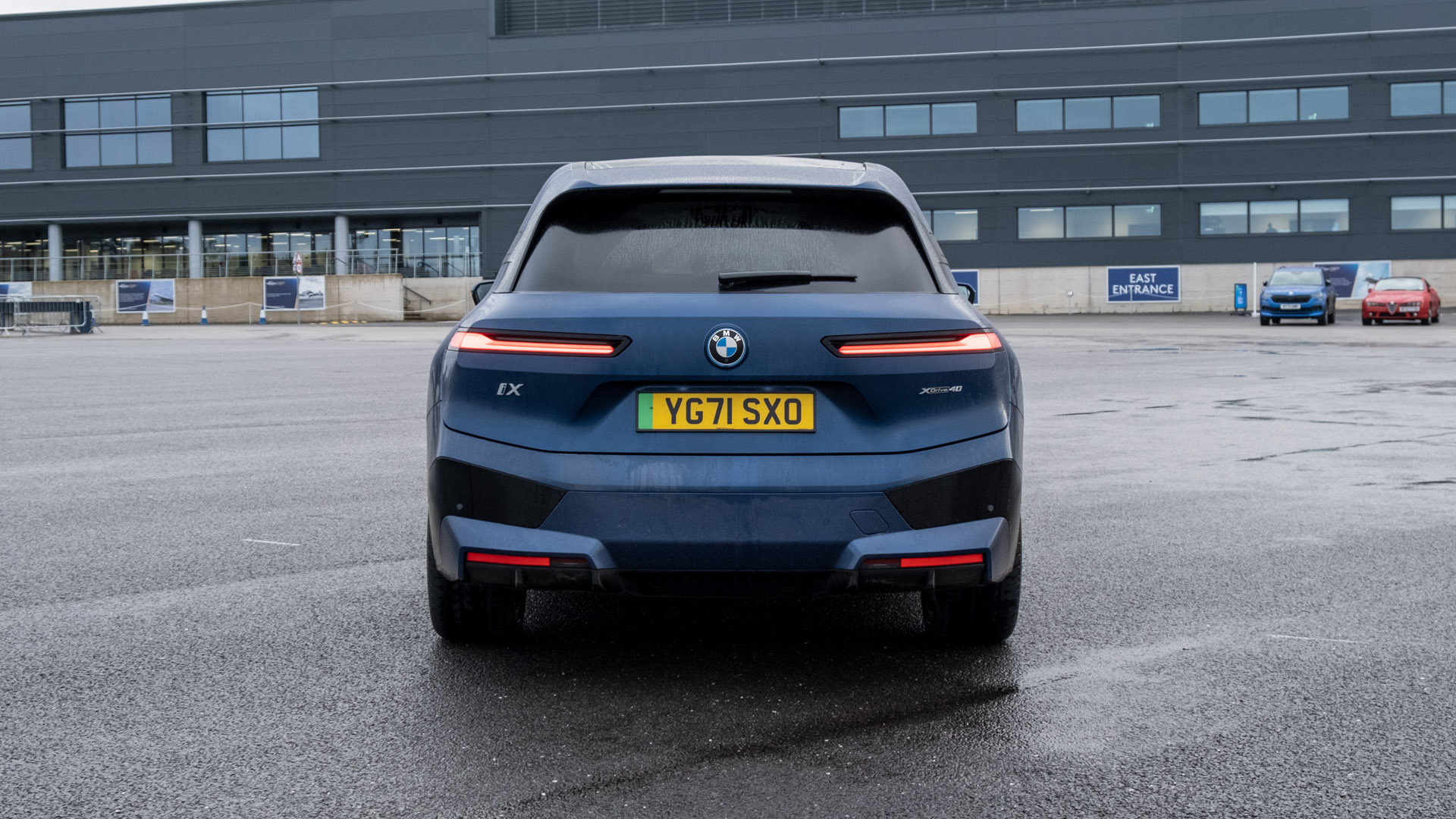 Regardless of straight-line speed, handling is equally important. Here, the iX’s front and rear air suspension provide for a dynamic drive, whereby there’s minimal body roll for a vehicle of its class. However, the car lacks that driver’s feel, as it has a disjointed steering input and further, with it weighing a whopping 2,440kg means it’s not exactly the most nimble SUV either – one can feel the weight of the iX when cornering, which isn’t very BMW-esque.

Elsewhere, the all-electric USV isn’t that comfortable to drive around town, whereby even in the comfort setting, which loosens up the steering wheel and relaxes the suspension, you’ll feel every pothole, speed bump and anomalies of the road beneath. Cabin noise is acceptable but is still no match to the likes of the Audi e-tron or even the BMW iX3.

As for its range, the xDrive40 houses a 76.6 kWh (71 kWh usable) battery pack, while the xDrive50 houses a much larger 111.5 kWh (105.2 kWh usable) configuration. In our short driving tests with the former vehicle, we netted around 200-210 miles of all-electric range, not too far off its 246-257-mile WLTP claim. Yet again, it’s not too bad but when compared to cheaper alternatives, it might leave you wondering why BMW is asking for over £69K. For example, in our mixed driving tests, the 2019 Audi e-tron achieved 190-200 miles, the Mercedes EQA 210-220 miles, the BMW iX3 245 miles, the Volvo XC40 Recharge Twin Pro 240-250 miles, the Audi Q4 e-tron, Volkswagen ID.4, Kia e-Niro, Kia Soul EV, and Hyundai Kona Electric all achieve around 260 miles, while the Skoda Enyaq iV nets closer to the 300-mile mark. Suffice to say, the iX is largely outclassed by its rivals.

When it comes to recouping energy back into the battery pack, the automaker has integrated one-pedal driving via B-mode. This allows you to bring the car to a complete standstill should you completely lift off the accelerator pedal. Of course, you can disable this behaviour by driving in D mode instead, and by deselecting adaptive regenerative braking through the infotainment system.

As for recharging, the iX supports up to 195 kW of input in the xDrive50, allowing you to get from 10-80% via its CCS port in just 35 minutes; the xDrive40 supports up to 150 kW and due to its smaller battery pack can charge to the same percentage in just 31 minutes. 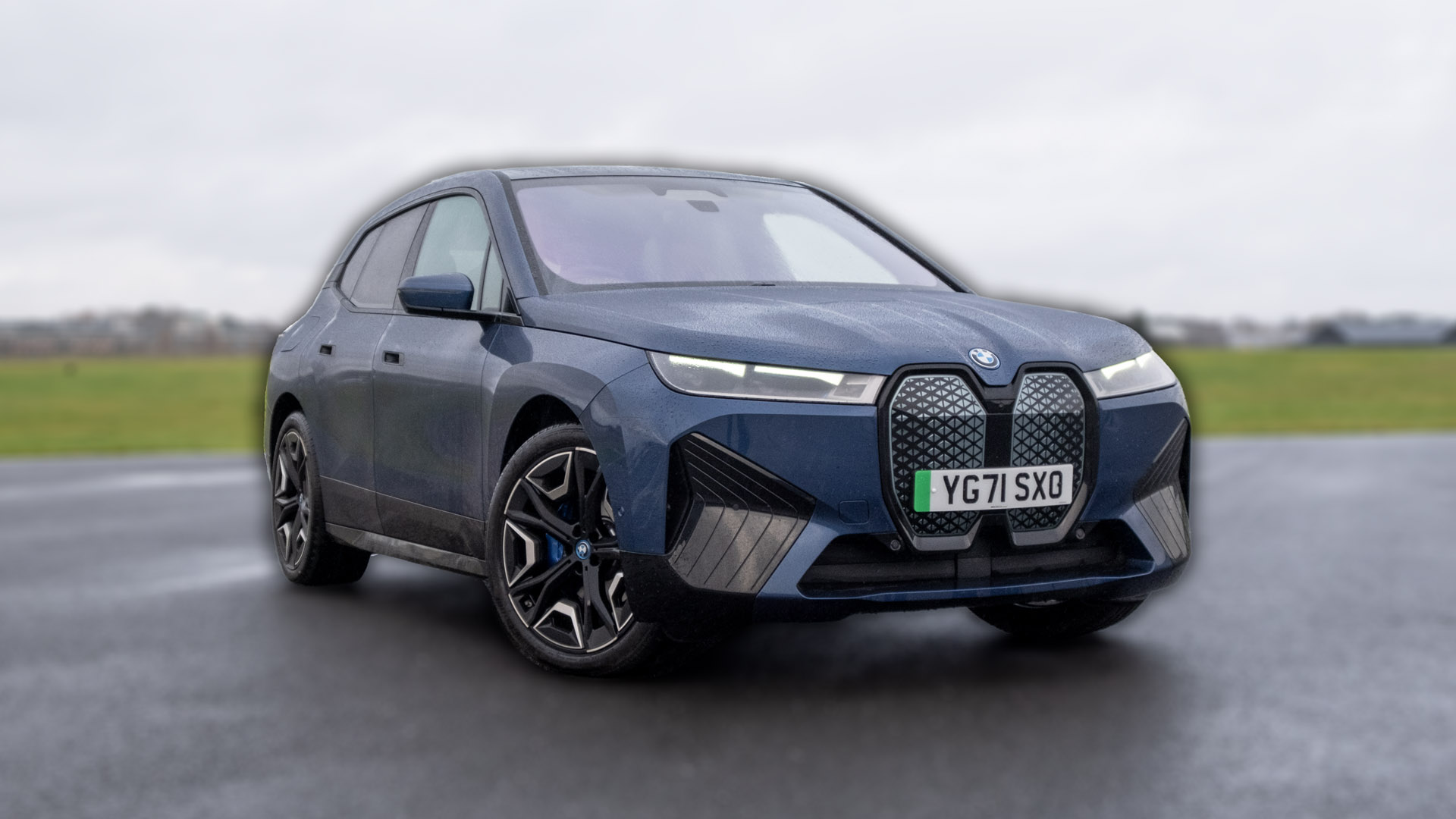 Our first impressions of the BMW iX are mixed. On one hand, it’s a different and spacious proposition to the all-electric market, while on the other it seems to be an overpriced SUV with limited range and performance – at least upon our first drive of the vehicle.