The BMW i4 is the first saloon and M-badged electric vehicle from the manufacturer. It marks a new era for the German automaker that’s progressively electrifying its fleet. Depending on the configuration, the i4 can get up to 62mph from a standstill in just 3.9 seconds and has a quoted range of 258 to 367 miles on the WLTP test cycle. 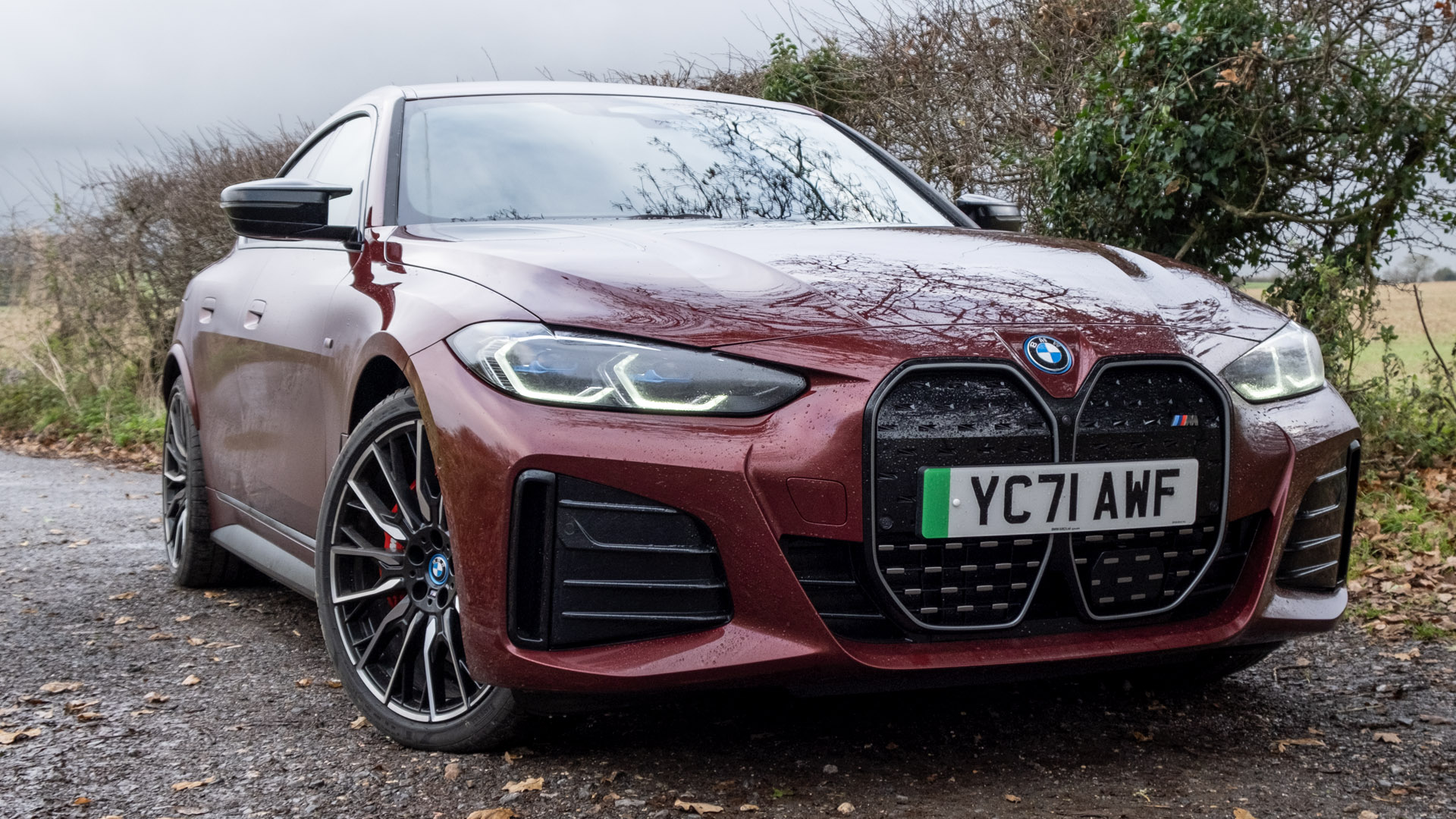 The i4 eDrive40 houses the same battery pack, but due to it omitting a front motor, it has a claimed range of 306-367 miles. From its rear-mounted motor, it has 250 kW (340 hp) of power and 430 Nm of readily-available torque. The M Sport variant is a little less efficient due to a few cosmetic changes, as it’s available with 18″ or 19″ alloys, as opposed to the 17″ alloys that come as standard on the entry-level model.

When it comes to its exterior design, the i4 is very similar to the 4 Series Gran Coupé and the new-generation M3 and M4. The front kidney grille dominates its frontal design but thanks to the numberplate breaking up its otherwise large-sized plastic insert, it blends seamlessly with the rest of the vehicle’s look.

Its side and rear profile look very much like other modern BMW vehicles, with the pictured 20″ rims on the M50 adding an additional insert around the rear wheel arches to cater for the larger-sized tyres. As for the door handles, they’re concealed within the car’s frame and are simple enough to operate from both the exterior and interior of the vehicle.

Aside from its stylish exterior design, the i4’s interior is similarly excellent. A curved 14.9″ infotainment screen seamlessly feeds into a 12.3″ instrument cluster. The screens are vivid, responsive and support both wired and wireless Android Auto and Apple CarPlay. Better still, the instrument cluster and Head-Up Display (HUD), which features as standard in the i4 M50 perfectly integrate navigation data from these third-party operating systems.

To interact with the instrument cluster or HUD, physical buttons reside around the steering wheel allowing you to easily tinker with your settings or adjust the view. As for the centre-weighted display, it can be navigated using the iDrive rotary wheel, which resides by the centre console alongside a flurry of physical buttons and the gear selector. Here, you’ll also find two cupholders, a USB Type-A port and a wireless charging pad for your smartphone.

On the dashboard, there are a few buttons and a volume knob but unfortunately, BMW has omitted physical climate controls and instead has them on the 14.9″ display. This makes it unintuitive to adjust the climate while on the move.

As for storage, there’s a small armrest compartment that’s large enough for a small-sized purse or wallet. Here resides a USB Type-C port, too. While the door bins and glove compartment complete the available storage one can utilise within the cabin. Onto the boot, there’s a large 470 litres of available space, and with the seats folded flat this figure extends up to 1,290 litres.

It’s great to see a large underfloor compartment space for one’s charging cables, a hatchback design and a 40:20:40 split for the rear seats – making it easy to transport elongated goods. One should consider, however, there’s slightly less usable space in the underfloor compartment with the Harman Kardon audio system installed. Indeed, the subwoofer resides in this space. There’s also no frunk (front boot) storage, like you’d find on the likes of the Tesla Model 3.

As for headroom and legroom, it’s plentiful at the front of the cabin, namely with electrically adjustable seats that allow 6-foot 4-inches (195cm) individuals to find the perfect driving position. At the rear, however, space is a little limited where 6-foot (182cm) individuals will find the back of the cabin a little bit of a tight squeeze. Similarly, the rear door is a bit compact making it not as easy to get in and out of the vehicle as opposed to the front.

While rear occupant space is a little limited, it’s not paramount when buying a saloon-sized BMW, at least, not in our opinion. It is, of course, the performance and driver’s feel which are supremely important – here, the i4 M50 that we have on test, outputs up to 405 kW (544 hp) of power and 795 Nm of torque. We had it tested from 0-60mph in less-than-ideal conditions in 4.04 seconds; we’re certain you can attain near the 3.6-3.8 second mark, should you have a clean getaway. Top speed is electronically limited to 139.8mph.

The driving experience is similarly impressive. Despite weighing 2,290 kg and having a 48.1% front and 51.9% rear weight distribution, the car is still plenty of fun to drive where one feels connected to the road with the vehicle’s steering input coming in a close second behind the Porsche Taycan Turbo. Note, the i4 eDrive40 Sport line weighs 2,125 kg and has a 45.1% front and 54.9% rear weight distribution, instead. 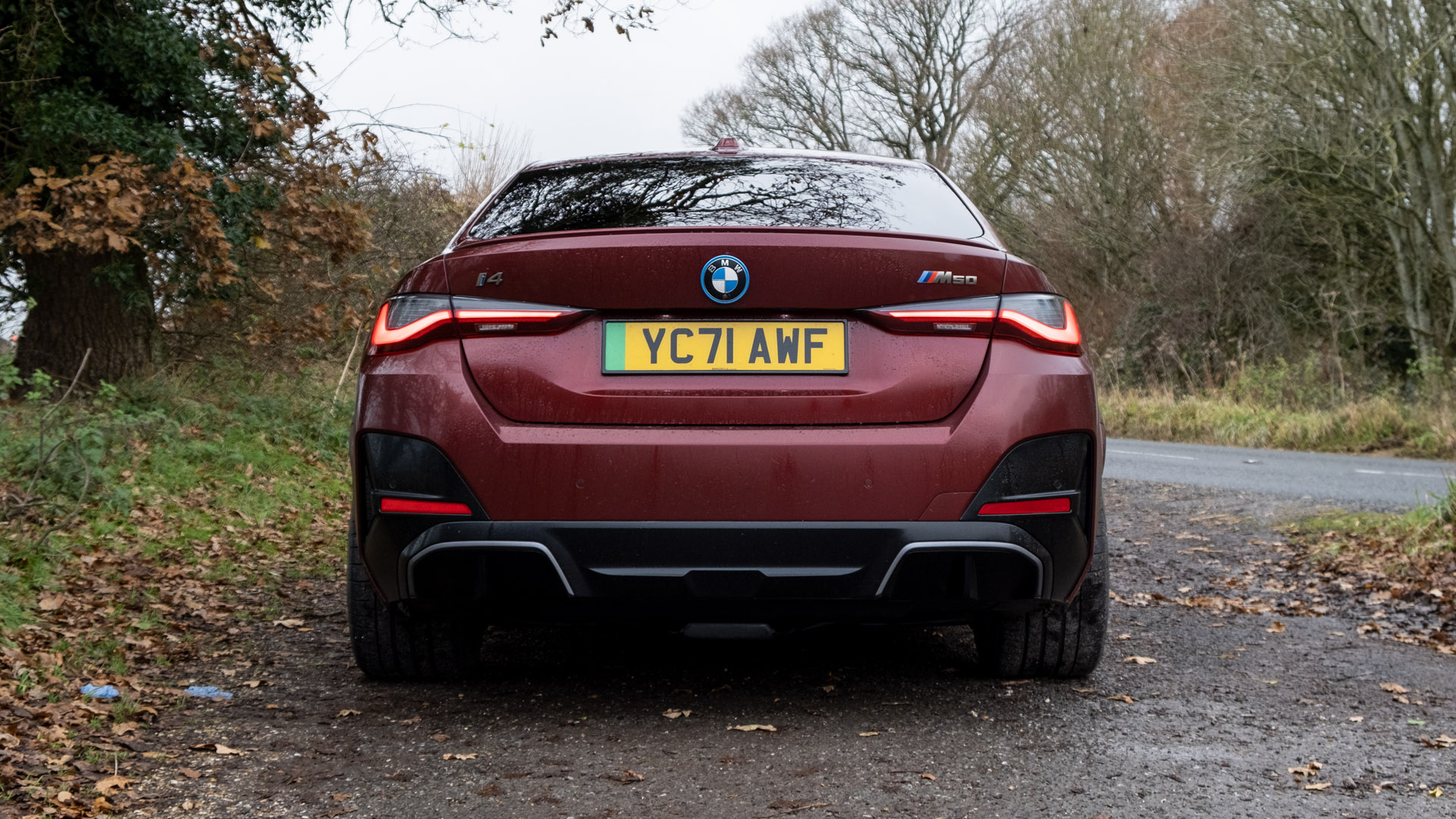 The i4’s driver’s feel is certainly a cut above the Polestar 2, Tesla Model 3 and the Audi e-tron GT; all of which are no slouches in this department either. To further heighten the experience, the M50 also features an all-wheel drive system, which gives you plenty of confidence around windy country roads; it grips extremely well, but still retains that much-loved BMW DNA, whereby the car can still lose its backend around certain corners.

As for range, the i4 houses a large 83.9 kWh (80.7 kWh net) battery pack. In the M50, with the fitted 20″ alloys, we achieved roughly 200-210 miles in our tests. While this was a relatively short experience, we did roughly 2-3 hours of driving on country roads, motorways and inner-city routes. We suspect those wanting to attain better range will want to opt for the smaller-sized alloys or the non-M badge vehicle. 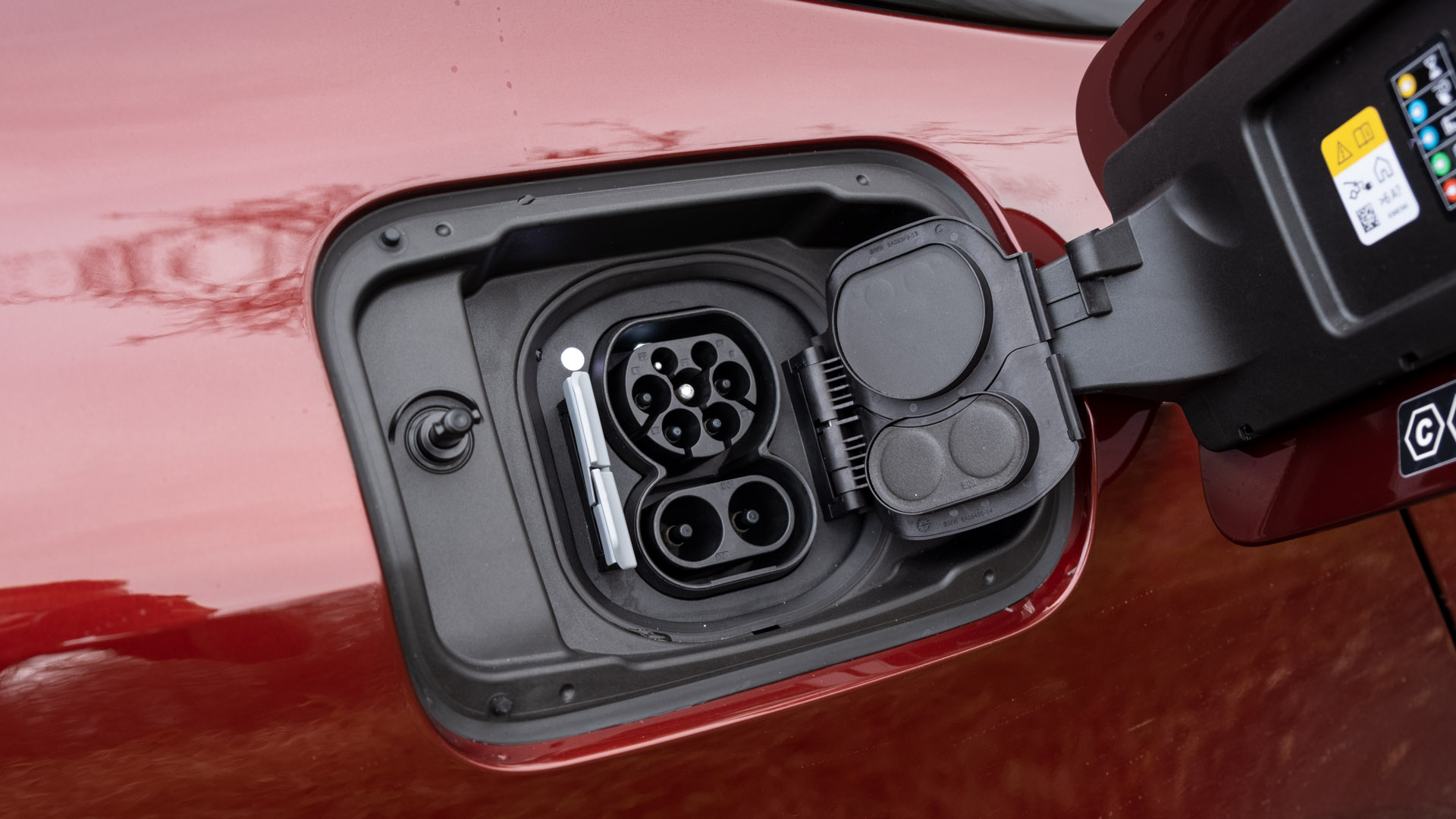 When it comes to recouping energy back into the battery pack, the automaker has integrated one-pedal driving via B-mode. This allows you to bring the car to a complete standstill should you completely lift off the accelerator pedal. Of course, you can disable this behaviour by driving in D mode instead, and by deselecting adaptive regenerative braking through the infotainment system.

As for recharging, the i4 supports a gigantic 200 kW input allowing you to go from 10-80% charge in just 31 minutes via its CCS port. On an 11 kW three-phase charger, it’ll take 8hrs 25mins to go from empty to full using its Type 2 port; it’ll take even longer on a 7 kW wallbox charger and over 35 hours on a 3-pin wall socket. 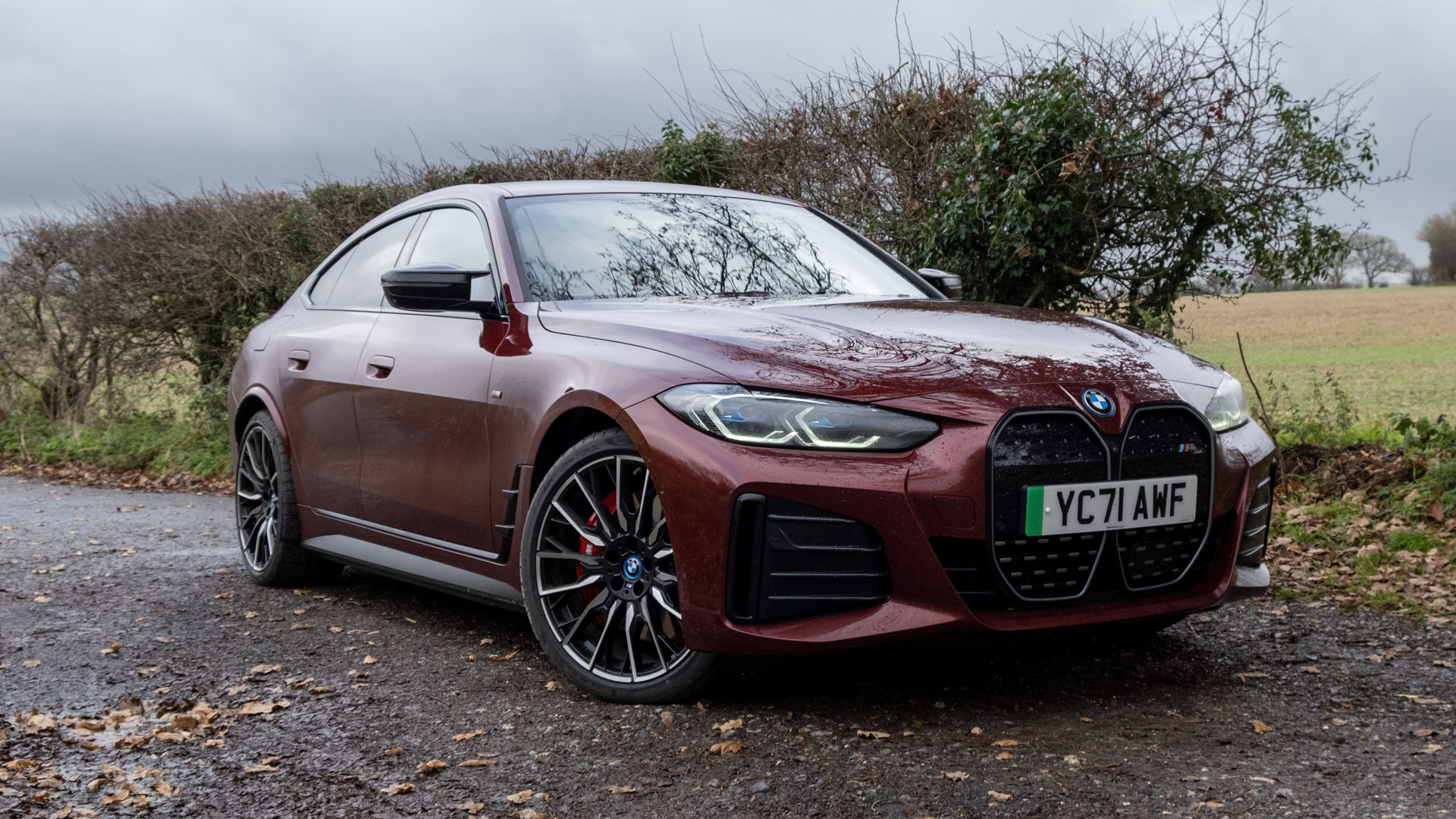 TotallyEV’s first impressions of the BMW i4

Our first impressions of the BMW i4 are certainly positive. While it’s more expensive than the Polestar 2 and Tesla Model 3, it provides a much-needed middle ground to the Audi e-tron GT and Porsche Taycan Turbo. It has BMW’s DNA written all over it, and is an exciting inclusion in the EV market.

We’re looking forward to putting it through its paces in TotallyEV’s mixed driving tests, where we can firmly compare its range figure to other electric vehicles that we have tested. What do you make of the BMW i4? Let us know in the comments below or via social media; we’re on: YouTube, Instagram, Facebook, Twitter and LinkedIn.