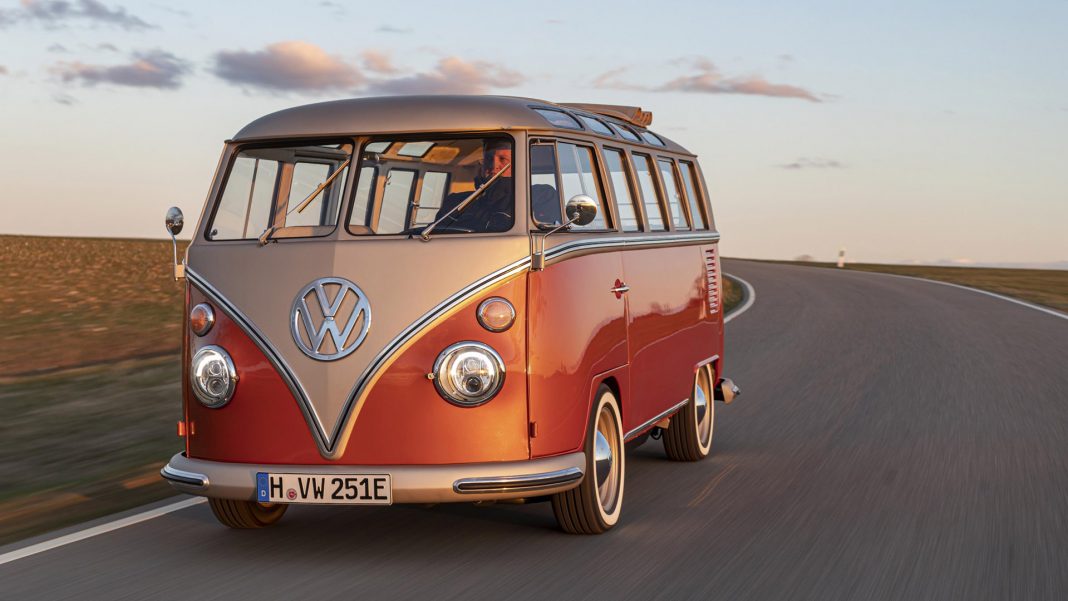 Volkswagen Commercial Vehicles (VWCV) is presenting for the first time the e-Bulli, an all-electric vehicle that produces zero emissions on the road. Equipped with the drive system components of the latest Volkswagen electric vehicles, the concept vehicle is based on a T1 Samba Bus produced in 1966 and comprehensively restored.

An important message for all fans of the Bulli and of electric mobility: the combination of high-end classic and high-tech electric vehicle will be available to buy for real. VWCV partner eClassics is planning to offer T1 conversions and T1 complete vehicles in the style of the new e-Bulli.

It started with the seemingly audacious idea of switching an historic Bulli over to a drive system producing zero emissions on the road in order to bring it in line with the challenges of a new era. To this end VWCV engineers and designers formed a team along with drive system experts from Volkswagen Group Components and the eClassics company, which specialises in electric car conversions.

As the basis for the future e-Bulli the team chose a T1 Samba Bus produced in Hannover in 1966, which prior to its conversion spent half a century on the roads of California. One thing was certain from the start: the e-Bulli was to be a T1 that utilises the Volkswagen Group’s latest electric drive system components. This plan has now been realised with the e-Bulli. The vehicle serves as an example of the great potential that this concept offers.

The 32 kW (44 PS) four-cylinder boxer engine gave way in the e-Bulli to a silent Volkswagen electric motor delivering 61 kW (83 PS). The comparison of the engines’ power output alone makes it very evident that the concept vehicle has completely new drive characteristics, as the electric motor is almost twice as powerful as the boxer. What’s more, with maximum torque of 212 Nm, the new drive provides more than twice the force of the original T1 engine from 1966 (102 Nm).

The maximum torque is also – as is typical for electric motors – immediately available. And that changes everything. Never before has there been an ‘official’ T1 as powerful as this e-Bulli. New in this form, it thus becomes a silent cruiser that combines the fascination of a zero-emission drive system with the incomparable style of a classic Bulli. 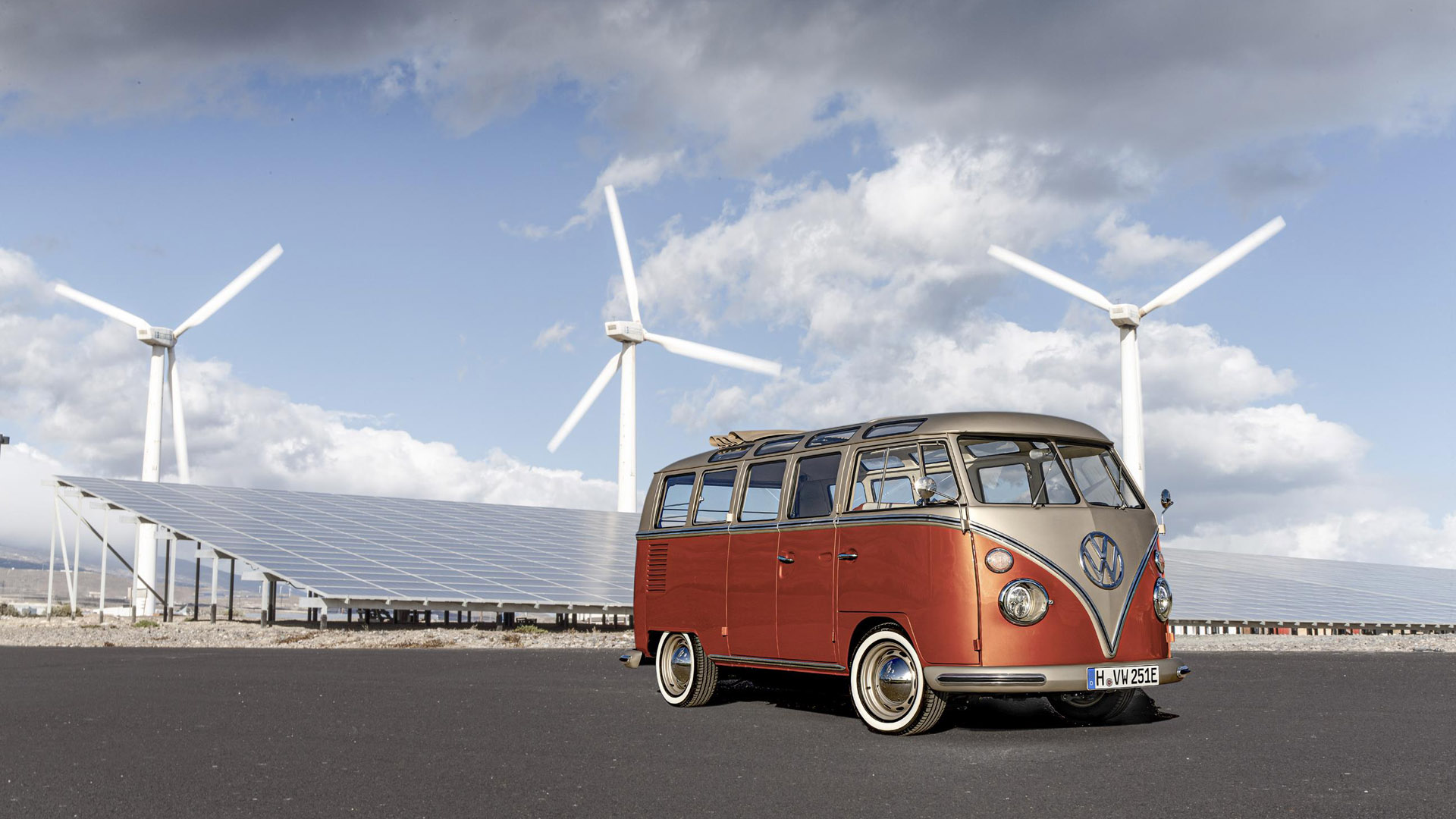 Power transmission is by means of a 1-speed gearbox. The drive system is coupled with the gear lever, which is now positioned between driver and front passenger seat. The automatic transmission’s selector settings (P, R, N, D, B) are shown next to the lever. In position B the driver can vary the degree of recuperation, i.e. of energy recovery when braking. The e-Bulli reaches a top speed of 130 km/h (electronically limited). With the original drive system the T1 managed a top speed of 105 km/h.

Just like the boxer engine of the 1966 T1, the combination of gearbox and electric motor integrated in the back of the 2020 e-Bulli drives the rear axle. A lithium-ion battery is responsible for supplying the electric motor with power. The battery’s usable energy capacity is 45 kWh. Customised for the e-Bulli in collaboration with eClassics, a power electronics system in the back of the vehicle controls the high-voltage energy flow between the electric motor and the battery and in the process converts the stored direct current (DC) into alternating current (AC). In addition, the on-board electronics are supplied with 12 volts via a so-called DC/DC converter.

All of the electric drive system’s standard parts are being made by Volkswagen Group Components in Kassel. Added to this come the lithium- ion modules designed at the Braunschweig components site. They are transferred by eClassics into a battery system appropriate for the T1. As in the new ID.3 and future ID.BUZZ, the high-voltage battery is housed centrally in the vehicle floor. This layout lowers the e-Bulli’s centre of gravity and thus improves its driving characteristics. 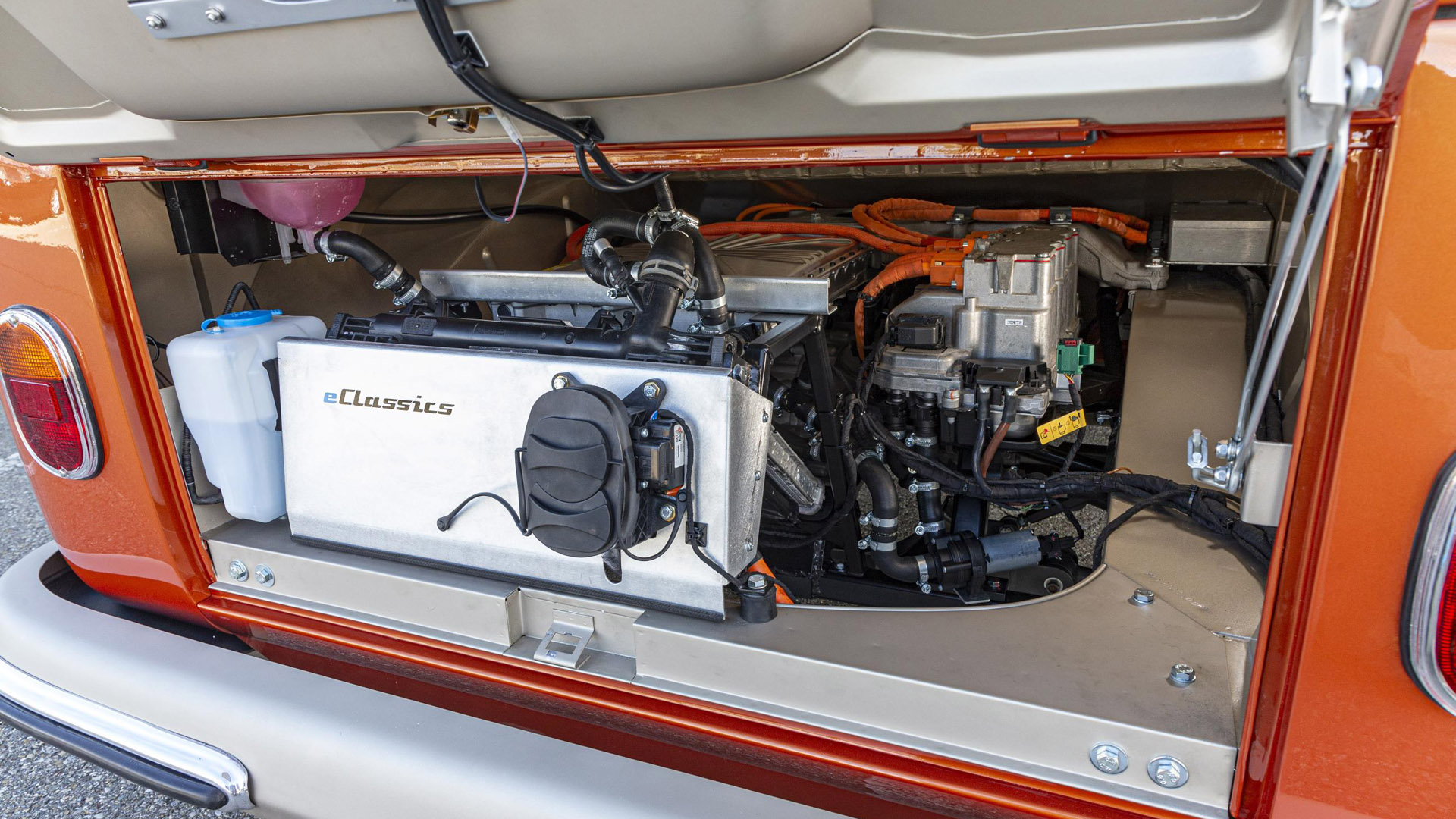 The battery is charged via a combined charging system (CCS) socket. It enables charging with alternating or direct current. Alternating current: The battery is charged via an AC charger with charging power of 2.3 to 22 kW, depending on electricity source. Direct current: Thanks to the e-Bulli’s CCS charging socket the high-voltage battery can also be charged at DC fast- charging points with up to 50 kW of charging power. In this case it can be charged up to 80 per cent in 40 minutes. The range with one full battery charge is more than 200 kilometres.

Compared to the T1, riding in the e-Bulli feels completely different. This is further enhanced by the chassis, which has also been redesigned: multi-link front and rear axles with adjustable shock absorbers and coilover struts, plus a new rack-and-pinion steering system and four internally ventilated disc brakes contribute to the new dynamic handling being transferred to the road with serene poise. 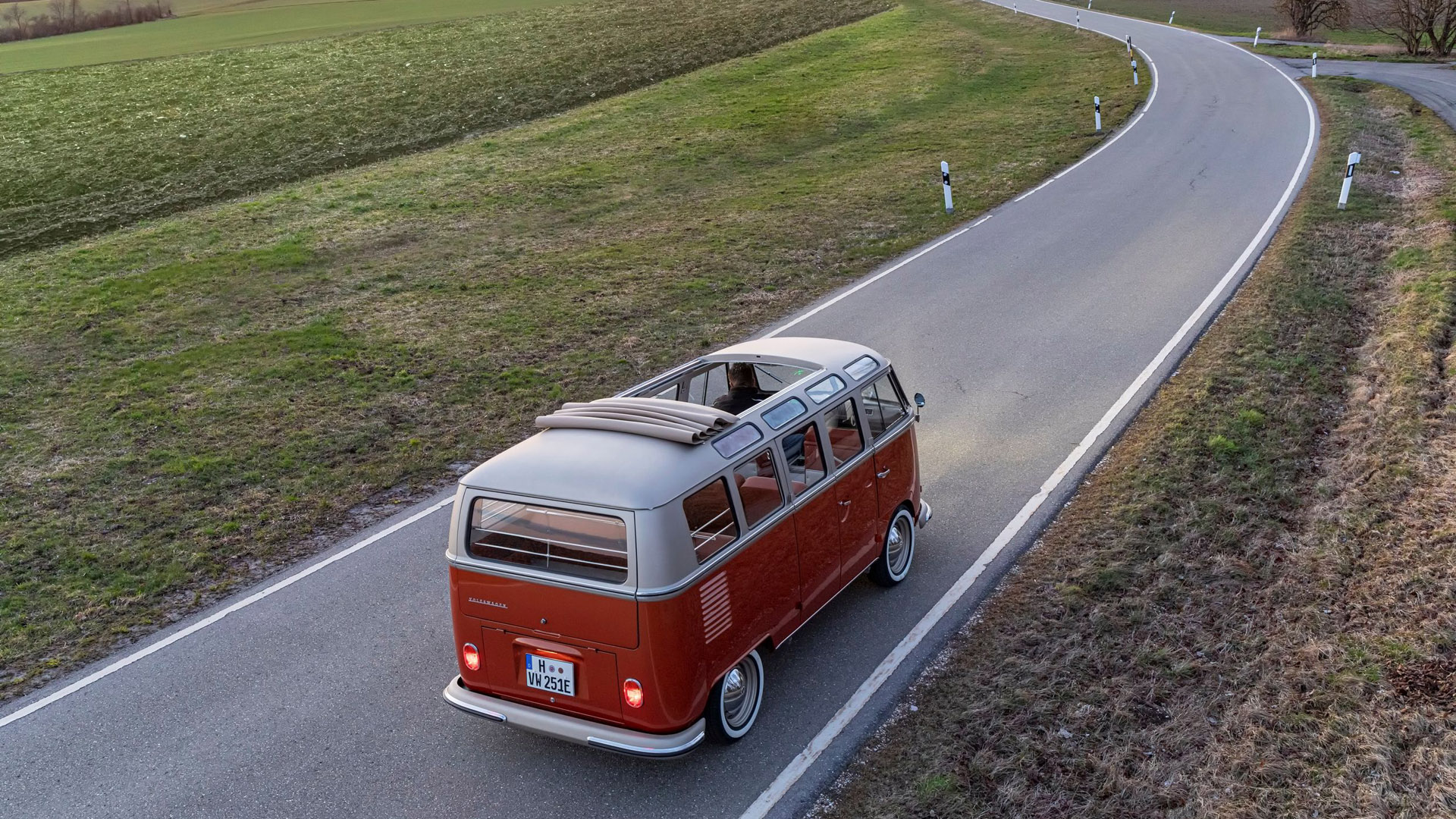 In parallel with the new electric drive system, an interior concept has been created for the e-Bulli that is both stylish and avant-garde. The new look and corresponding technical solutions were developed by the Volkswagen Commercial Vehicles design centre in cooperation with VWCV Vintage Vehicles and the Communications department. The designers modernised the exterior of the iconic vehicle with great sensitivity and finesse, including giving it a two-tone paintwork finish in ‘Energetic Orange Metallic’ and ‘Golden Sand Metallic MATTE’.

It is details such as the new round LED headlamps with daytime running lights, via which the transformation into the modern era is outwardly communicated. On the outside at the rear there are also LED charge indicators. They signal to a driver walking up to the e-Bulli how much charge the lithium-ion battery still has even before they reach the vehicle. 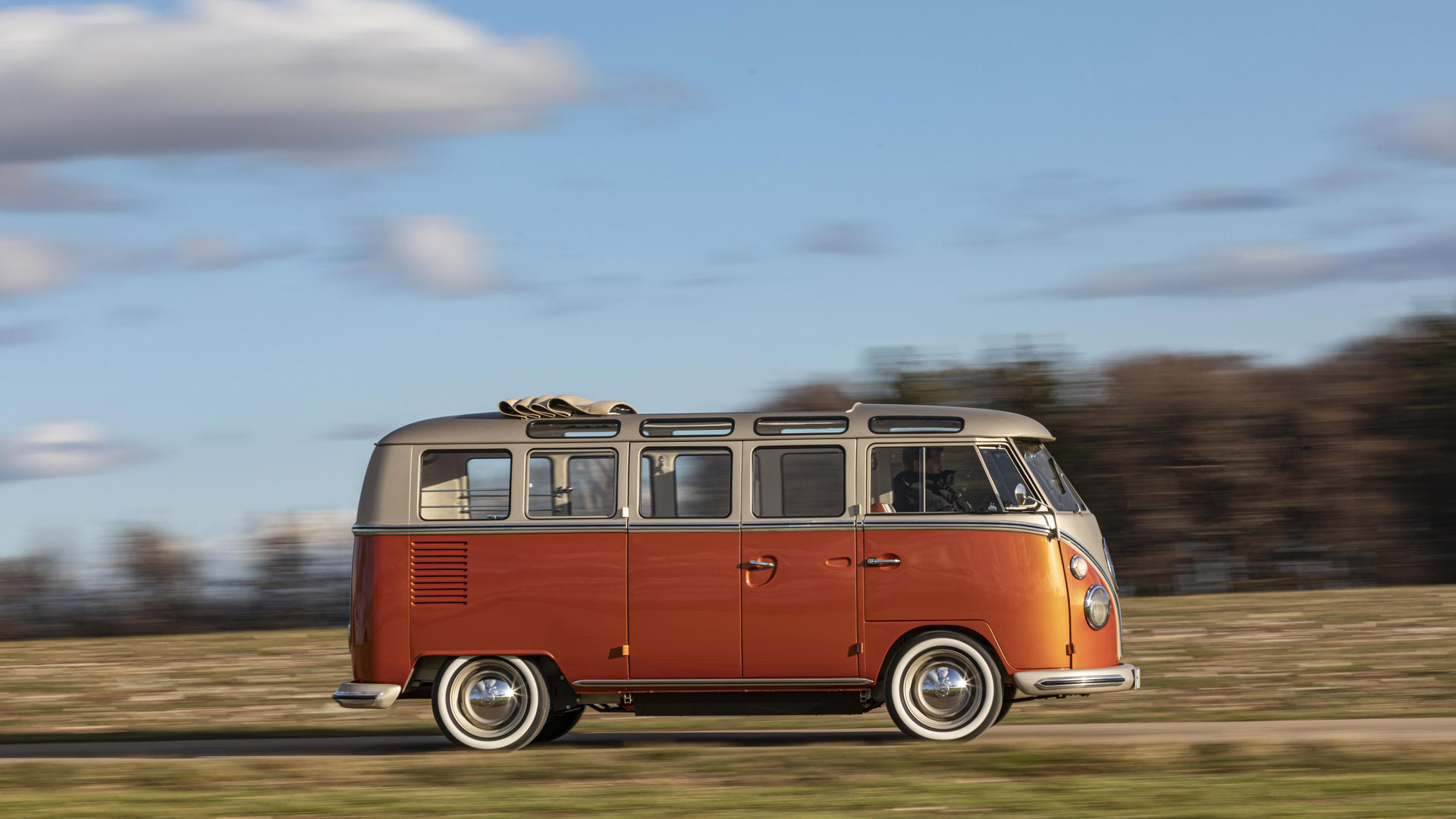 It is only when you look through the windows into the eight-seat interior that you notice that a few things are not as you might assume them to be in a T1. Volkswagen Commercial Vehicles’ designers have re-imagined a lot of the interior, without, however, for a second losing sight of the original concept.

The seating is one of the new features. In keeping with the external paintwork, it is also in two colours: ‘Saint Tropez’ and ‘Saffrano Orange’. Positioned within a console between the driver and front passenger seat is the new automatic transmission selector lever. Also integrated here: the start/stop button for the electric motor. Solid wood in the look of a ship’s deck is used for the floor throughout.

As a result of this and the nice bright leather tones, this electrified Samba Bus takes on a maritime feel. This impression is strengthened by the large panoramic folding roof. 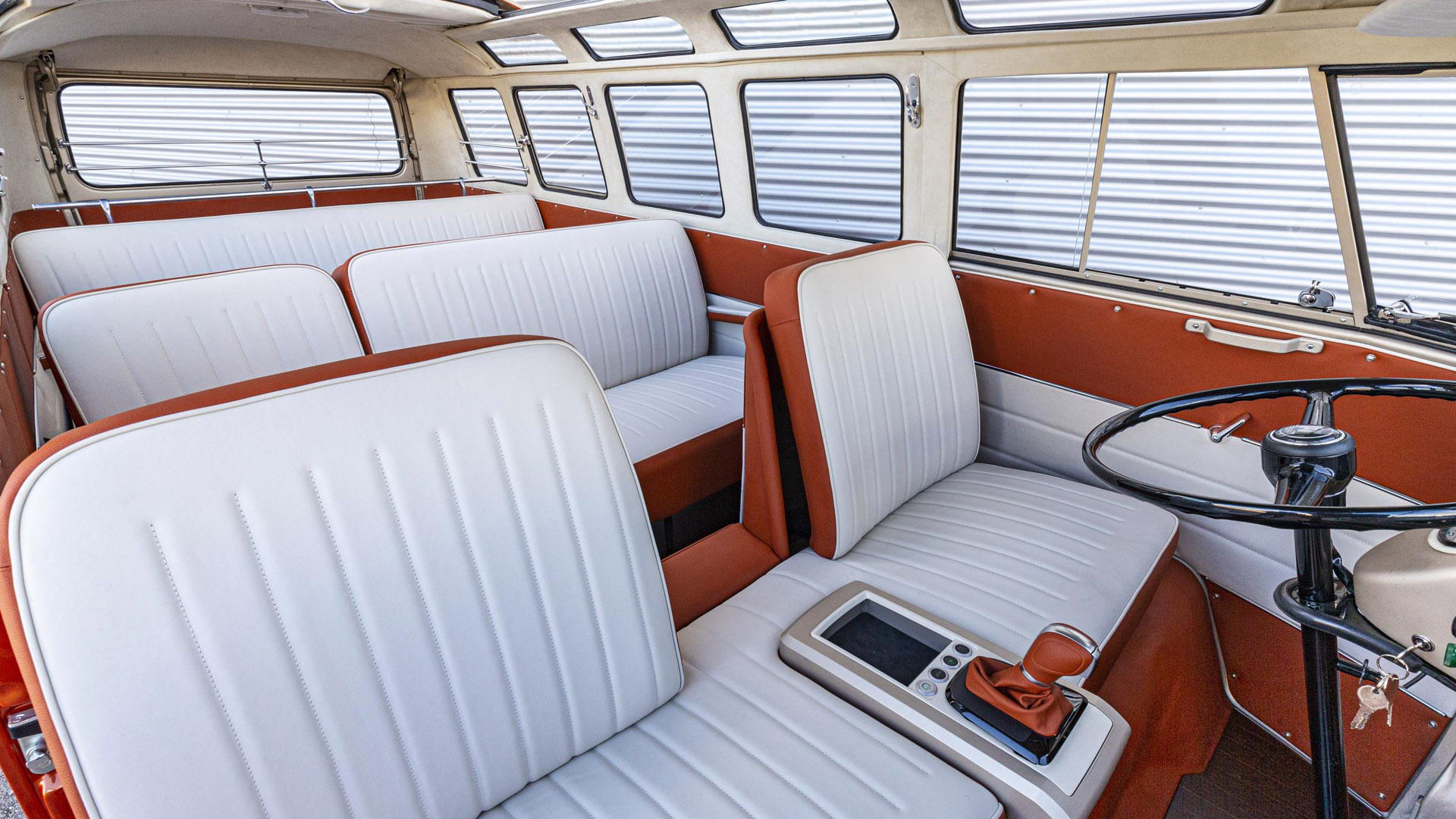 The cockpit too has been sensitively modernised. The new speedometer is based on the original, while a two-digit display integrated into it creates a link to the modern era. This digital display in the otherwise analogue speedometer provides the driver with a variety of information, including range. LEDs also indicate whether, for instance, the parking brake is on or the charging connector is plugged in.

There is a small but lovely detail in the centre of the speedometer: a stylised Bulli symbol. A multitude of further information is shown via a tablet integrated into the roof console. Via Volkswagen ‘We Connect’ the e-Bulli driver can also call up information online by smartphone app or via a PC and a corresponding web portal such as on remaining charge time, current range, kilometres travelled, trip times, energy consumption and recuperation. 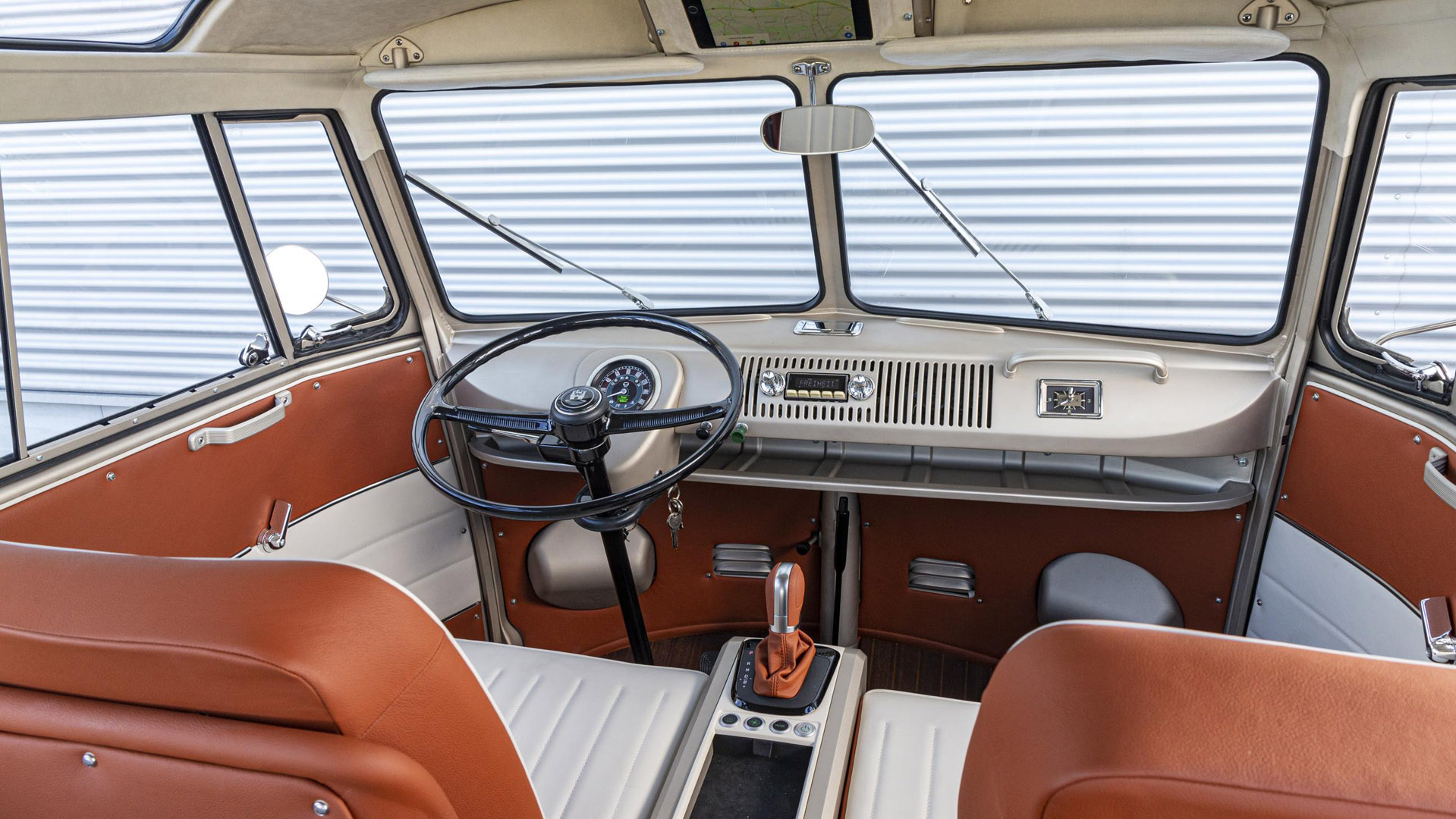 Music on board comes from an authentic-looking retro-style radio, which, however, is equipped with cutting edge technology such as DAB+, Bluetooth and USB. The radio is linked to a sound system with out-of-sight components, including an active subwoofer.

All who find the new e-Bulli an electrifying prospect can fulfil their dream of owning an emission-free T1 at eClassics. They are offering the T1 conversion, complete with redesigned front and rear axles, at prices starting from 64,900 euros. T2 and T3 conversions are being offered by eClassics too. The company is also offering qualified dealers a ready-to-fit parts kit.

Skoda expands its range of electric vehicles in the UK