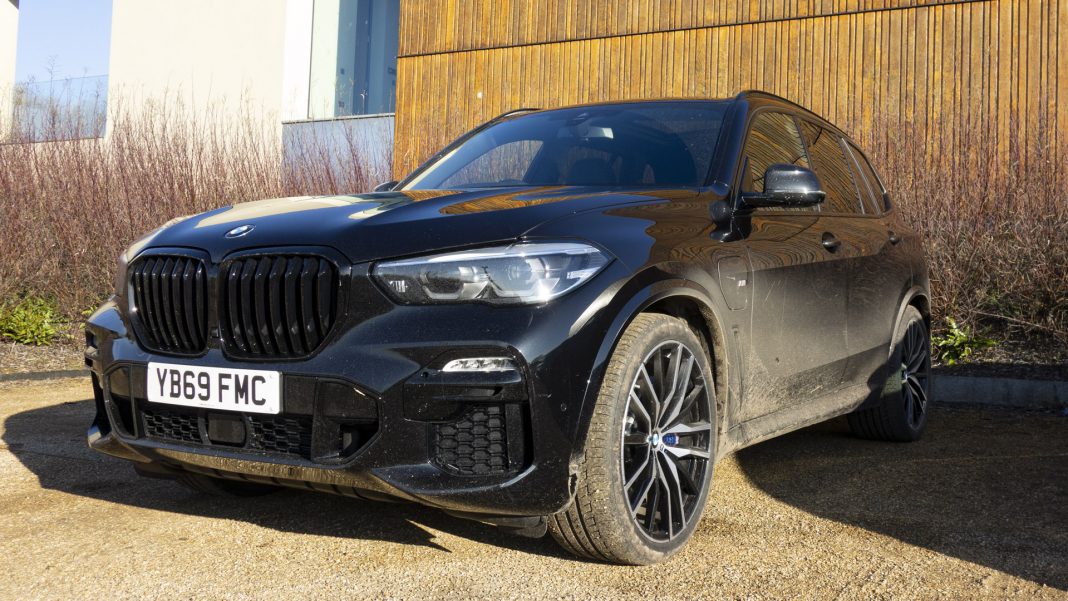 A Sport Utility Vehicle (SUV), or as BMW coins it a Sports Activity Vehicle (SAV), combines the best elements of an off-road and road vehicle into one complete package. The ideology of having a fun-to-drive multi-purpose vehicle couldn’t be any more applicable than with the BMW X5 M Sport.

TotallyEV drove the German manufacturer’s top-spec X5 xDrive45e M Sport – the plug-in hybrid variant, which at the time of writing, starts from £68,245. 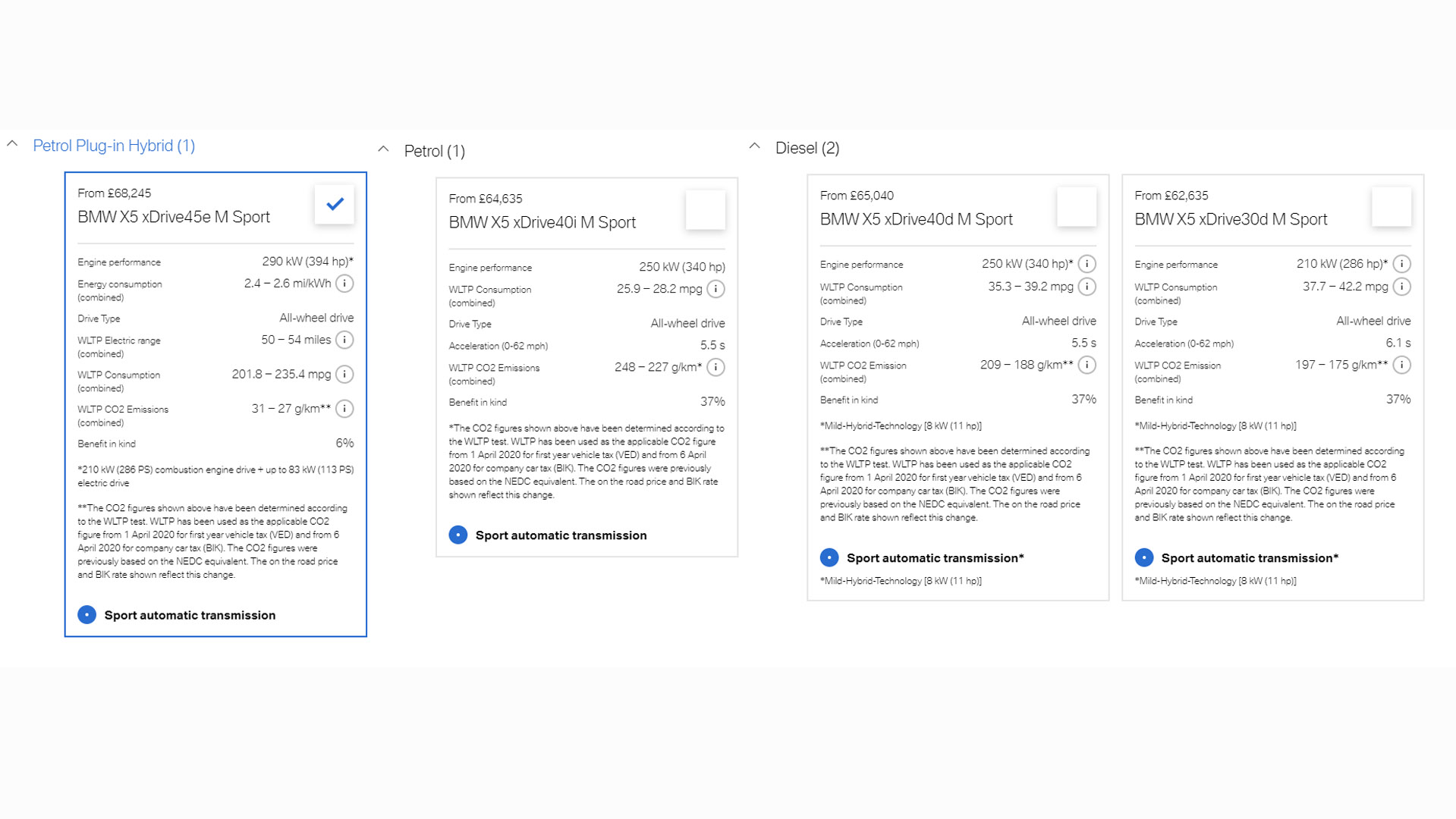 Aside from the boost in performance over its pure petrol and diesel counterparts, the plug-in hybrid (PHEV) also offers significantly lower CO2 emissions; whereby its WLTP combined figure sits between 27-31 g/km, which is almost ten times lower than its pure petrol variant – the xDrive40i M Sport – that emits 227-248 g/km.

As a result, the PHEV only incurs 6% Benefit-in-Kind (BIK) tax, as opposed to the 37% incurred by the other X5 xDrive M Sport models. This translates to lower contributions to an individual’s tax claim – a sizable difference for those looking to get a company car.

The differences between each of the M Sport models have practically no impact on the exterior aesthetics of the vehicle – the only difference in the PHEV model is the addition of a charging port, which is located under a flap by the driver’s side A-pillar. 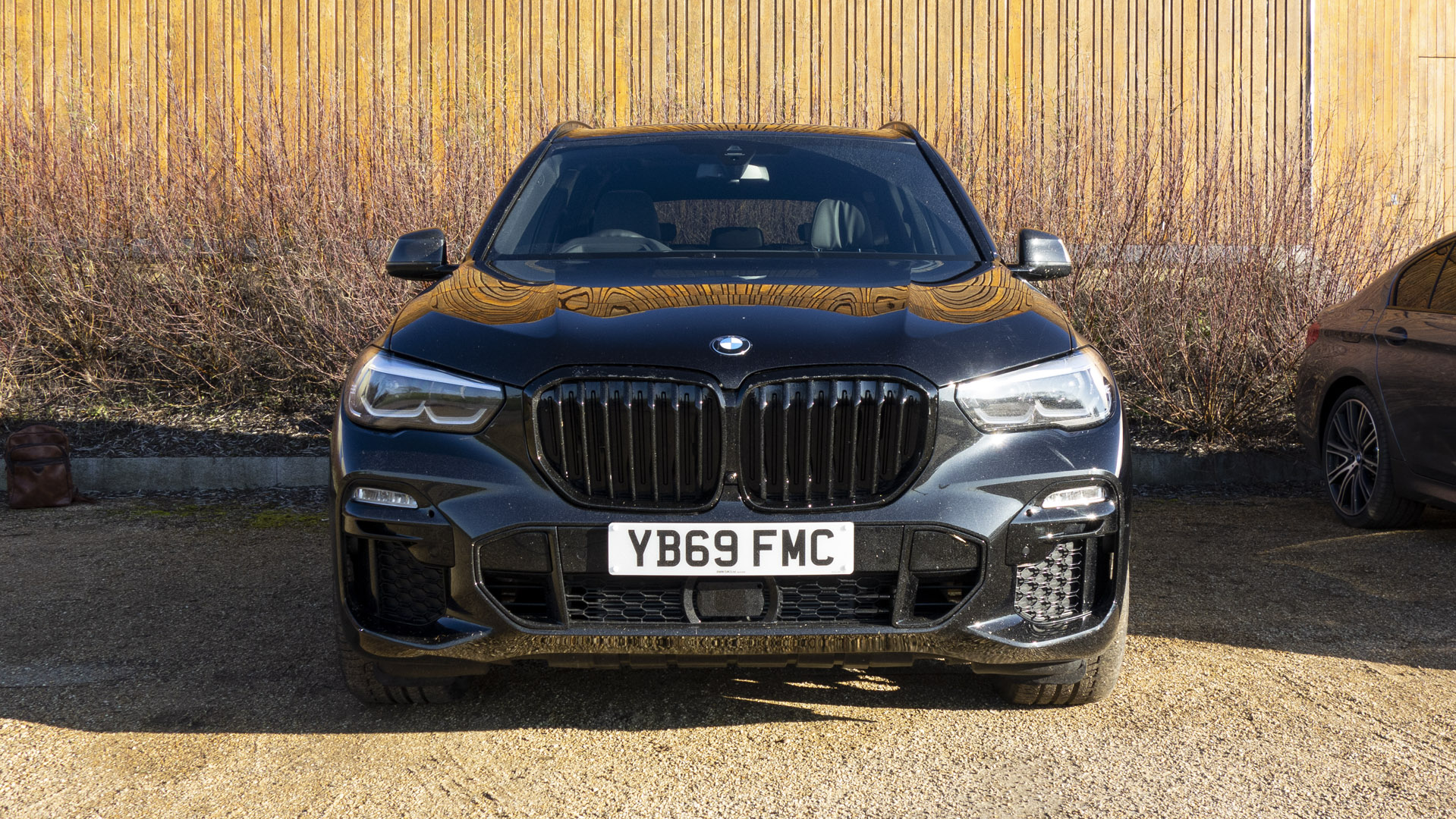 From the exterior, the xDrive45e M Sport looks the part. It’s everything you’d come to expect from an M-badged BMW. Mean-looking design, sporty larger-sized rims and colour-matched bumpers and side skirts.

With that said, the design of the vehicle’s front grille is like marmite. Some love it, while others find it reminiscent of a fish’s gills. It’s not quite the sleek M-type-grille of the M2 or M4 Competition, for example.

Inside, the X5 xDrive45e M Sport is both sporty-looking and practical. The model pictured on test comes with a whole host of additions that add to the overall comfort and design of the interior cabin.

The Comfort Package adds ‘Comfort Seats’; the M Sport Plus package adds the ‘M seal belts’ inside the cabin alongside ‘Sun Protection Glass’; the Technology Package provides a ‘Head-up Display’ and a ‘Harman Kardon Surround Sound System’; the ‘Rear Seat Entertainment’ adds two 10.2″ monitors for the rear passengers; while the ‘Sky Lounge Panoramic Glass Sunroof’ brings in heaps of additional sunlight into the cabin – naturally you can opt to close the roof’s blind if there’s ample amount of sunlight.

The design of the vehicle’s cabin is relatively well-thought-out. There’s an accessible 12.3″ infotainment system on the dashboard for both the driver and the front-seat passenger to access, while the vehicle’s climate controls have been thankfully kept accessible through a set of physical buttons located underneath the touchscreen display.

As for the instrument cluster, it’s customisable through the vehicle’s settings and its large 12.3″ display is plenty bright for those days where ambient light is at a heightened level. 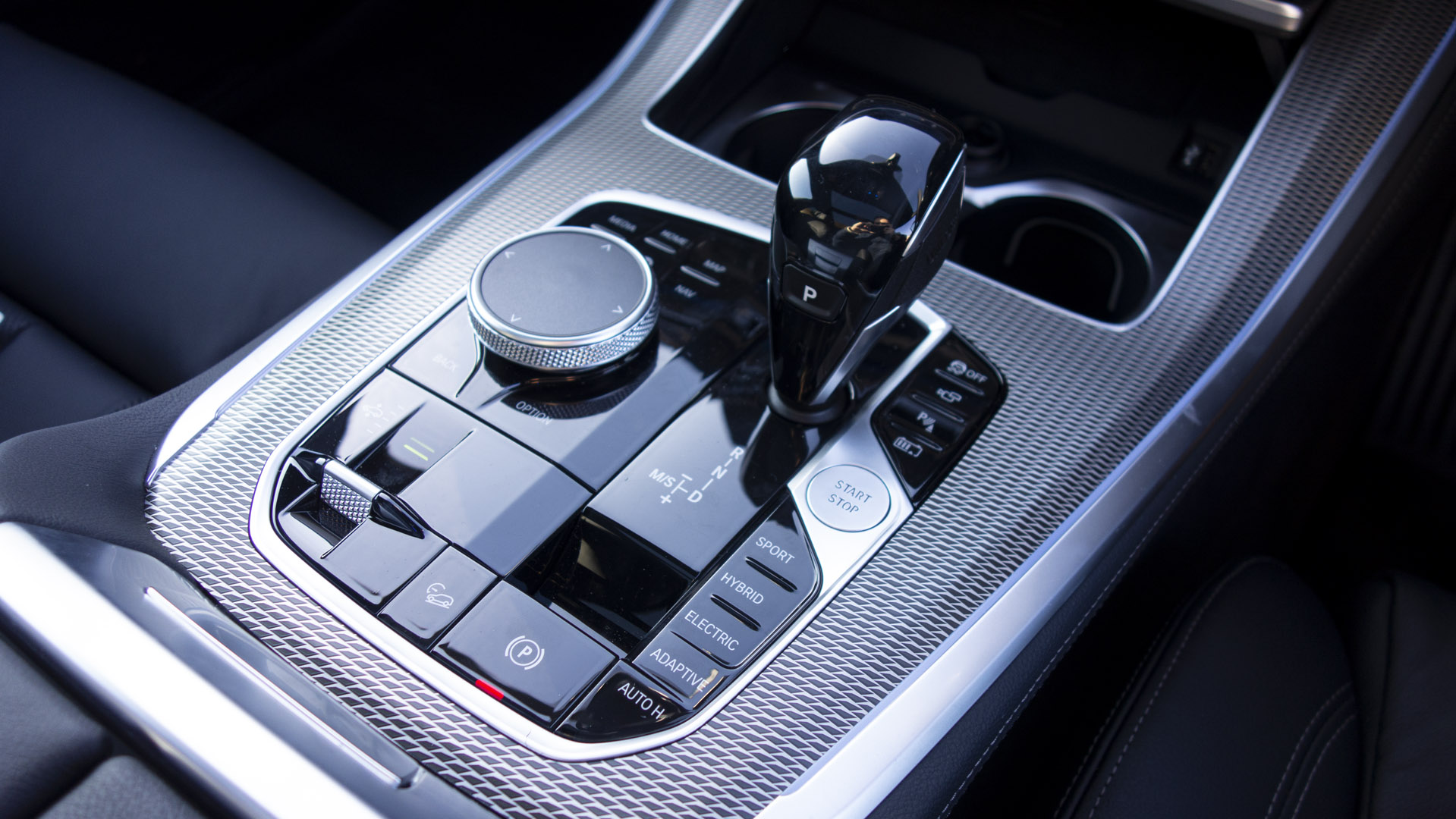 Unfortunately, the same praise couldn’t be given to the vehicle’s centre console, which is overly-packed with buttons. Here, you’ll find the vehicle’s driving modes, a gear selector, the infotainment dial and its controls, and to top it off a toggle to adjust the vehicle’s suspension. Frankly, it’s all a bit messy and can be hard to get used to, namely when you’re wanting to switch between drive modes; in our opinion, the Start & Stop button shouldn’t reside by the vehicle’s battery-check indicator nor its driving modes.

While the interior is somewhat of a success, the vehicle’s performance does certainly tick all the right boxes, at least upon our first drive.

The BMW X5 xDrive45e M Sport has up to 290 kW (394 hp) of power, with a 0-62mph time of around 5.6 seconds and a top speed of 146 mph. Thanks to its electric drive motor and 3-litre six-cylinder engine, the vehicle dispatches 600 Nm of torque; that’ll keep you smiling when you put your foot down when making a quick getaway at the traffic lights.

Aside from its sheer power, the SUV is fun to drive. It grips around country roads in Sport mode, while in Electric or Adaptive mode, the suspension loosens up to provide a more comfortable, leisurely experience. Potholes can still be felt through the vehicle’s 2-axle air suspension but in the grand scheme of things, it’s negligible. 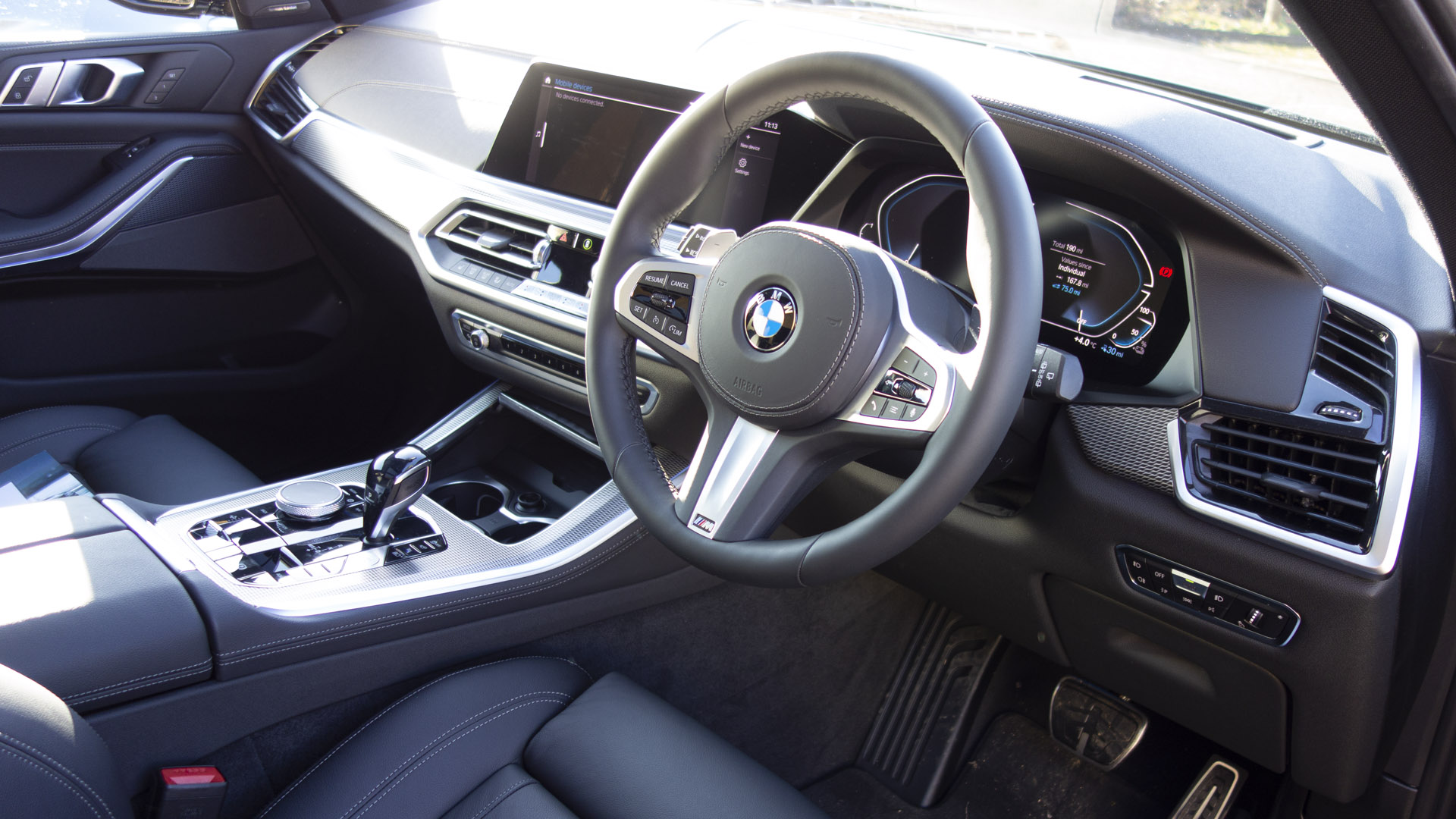 As for the sport automatic transmission, which comes as standard in all the X5 models, our X5 xDrive45e M Sport seamlessly changes through all of its eight gears. Kick-downs are met with real responsiveness, while the transition between pure electric and semi-to-full petrol-based power is indistinguishable.

On that note, the electric range on offer with the xDrive45e M Sport sits at around 54 miles. That’s about enough to take you from London to Canterbury on a single charge; at least according to BMW’s WLTP claims.

To recharge the X5’s 24 kWh battery, it’ll take over 11hrs when coupled with a regular 3-pin wall plug, while a 7 kW charge significantly reduces the number of hours required before setting off on your next all-electric drive. 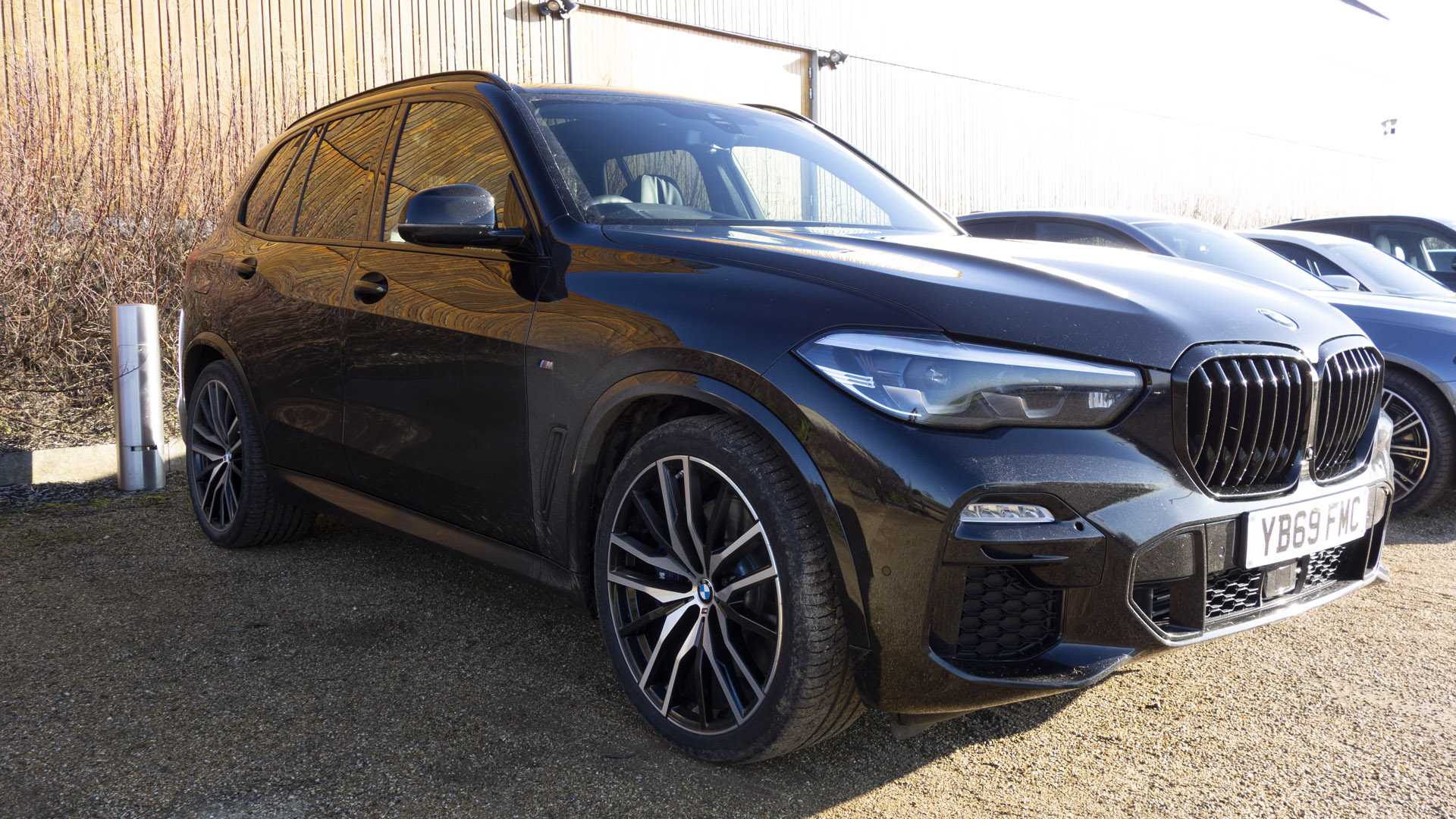 On the whole, our first impressions are positive. The BMW X5 xDrive45e M Sport is a lot of fun to drive, while also combines a more eco-friendly drive to reduce its carbon footprint.

It’s, however, a pricey vehicle with the one tested coming in at £79,020 with all of its options included. Would you see yourself driving the BMW X5 xDrive45e M Sport? Let us know in the comments below or via social media; we’re on: Facebook, Twitter, Instagram and YouTube.