Features How workplaces can play a vital role in the growth of electric... 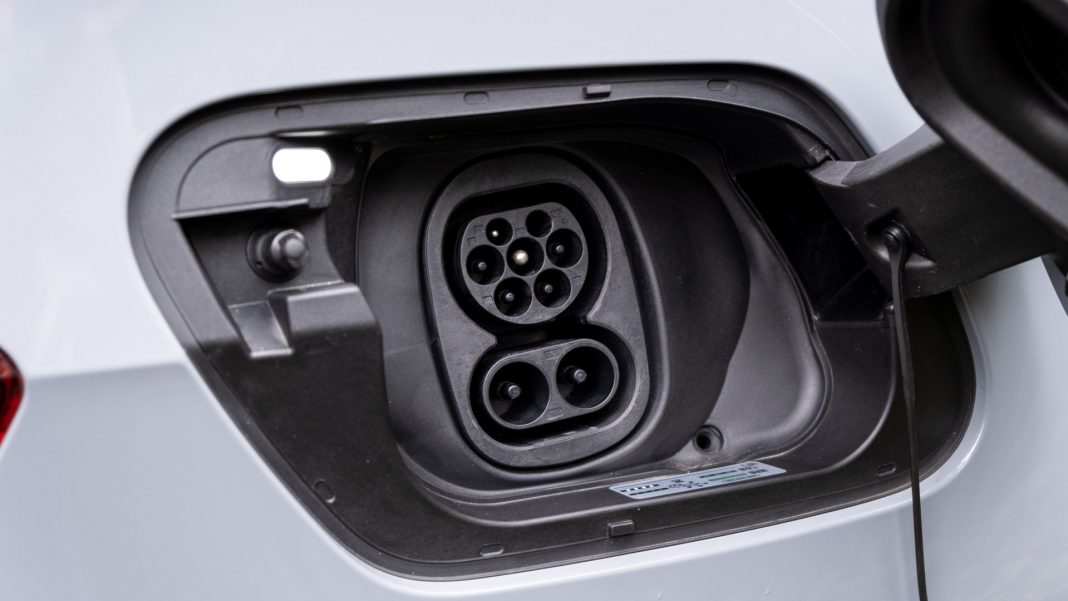 While crises have been easy to come by over the past 12 months, taking positive action against climate change undoubtedly remains a top priority for consumers, businesses and governments alike. In fact, the vital urgency of the climate crisis has meant that consumer expectations are changing in ways that have never been seen before.

EVBox Group’s recent study found that in the UK, the majority of the general population expect the government to focus on policies that have our planet’s interests at heart. These expectations are now extending to businesses, with consumers demanding that companies take clear action to address environmental issues.

The key to addressing environmental issues is the increasing adoption of electric vehicles (EVs). The same study found that 66% of the UK population felt that electric vehicles will play a crucial part in combating the climate crisis, with one third considering the switch to an EV in the near future. However, while the adoption of electric mobility is clearly a priority for consumers, it’s evident that workplaces are yet to catch up. 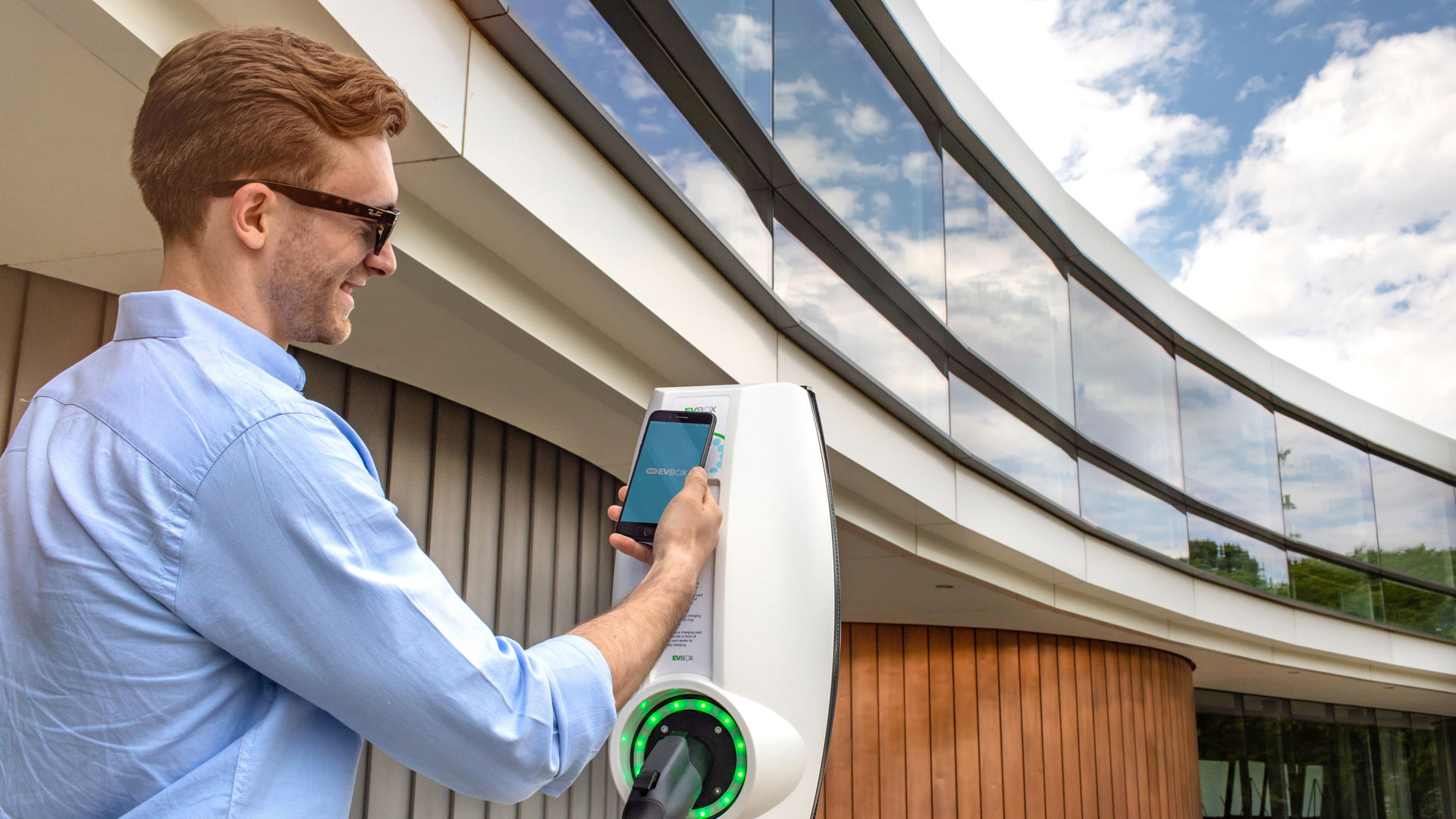 The majority of EV charging sessions in the UK take place at home (68%), while EV drivers across Europe have found that only 29% of the time there are enough places to charge at work. Strikingly, 20% don’t have access to a workplace charger at all.

Given the change in customer expectations regarding sustainability and the clear benefits derived from the adoption of EVs, it is no surprise that there is increasing pressure on companies and employers to provide electric company cars and sufficient charging infrastructure.

To get a fuller picture of the issue at hand, TotallyEV reached out to Jonathan Goose, Regional Director of UK & Ireland at EVBox to comment how the ability to charge EVs at the workplace will play an increasingly important role in the electrification of UK and European transport in the coming years, and the steps being taken to ensure this is made a reality.

The current state of EV infrastructure in UK and European companies

So, how are UK and European companies currently catering for EVs? The study found that just one in five employed respondents across Europe work at a company that offers electric vehicles as a lease car option. While the UK has the largest proportion of companies that offer electric vehicles to its employees, the figure stands at only 27%.

This lack of adoption is surprising, given European citizens are demonstrably keen to adopt electric driving, with 47% of respondents stating that they’d like to work for companies that offer EVs as company cars. 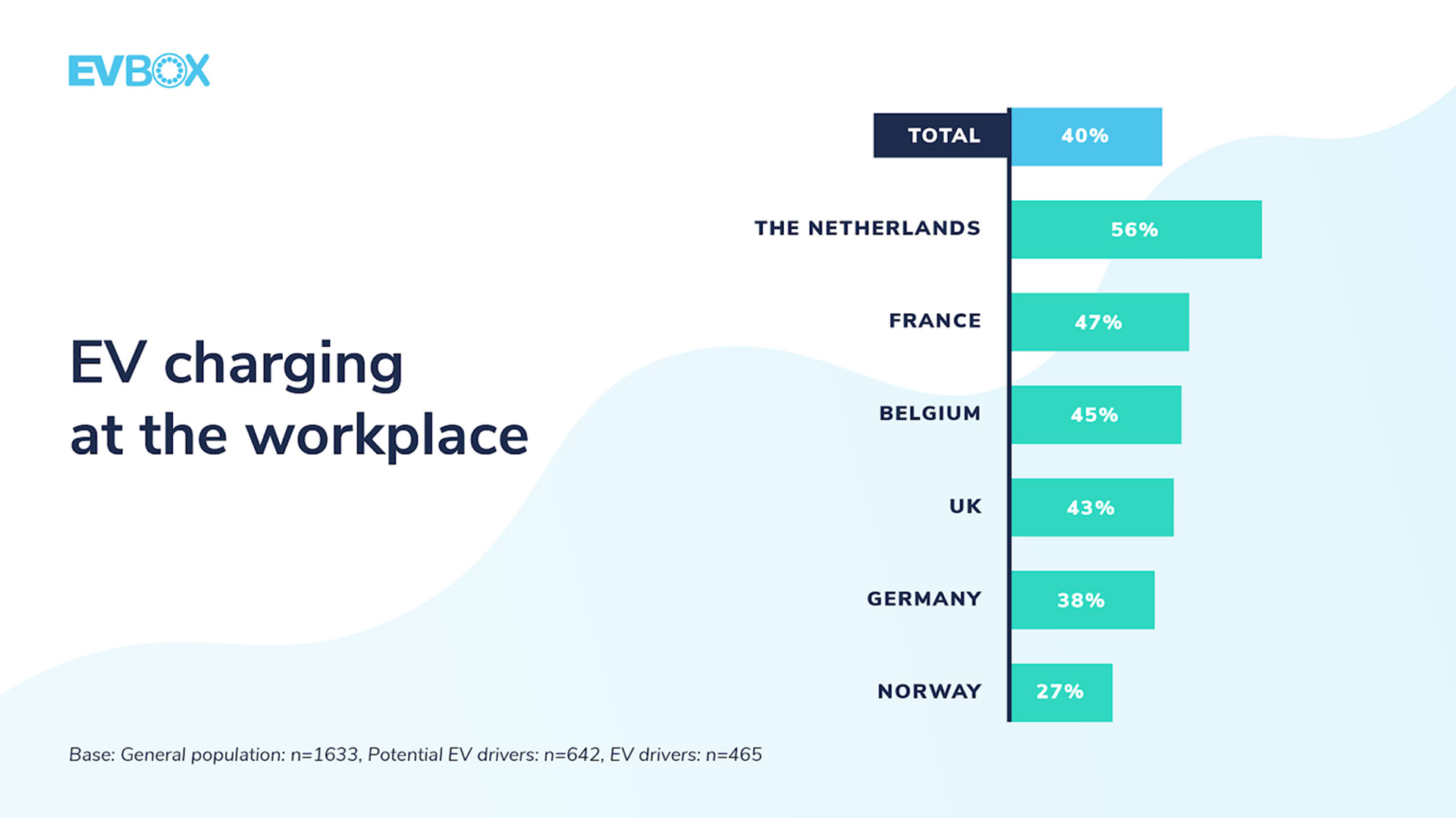 As for the broader environmental picture, more than two out of five European citizens are working for a company that already has a sustainable vision in place. The Netherlands is leading the way (42%) in this regard, followed by Norway (41%). The UK, meanwhile, is right behind (39%). These figures show that sustainability-minded companies are in the minority across the UK and Europe, giving a clear indication of how much work there is to be done.

This seeming dereliction of duties in addressing our planet’s most pressing of issues is clearly impacting consumer opinion. This is shown most vividly in the finding that 40% of respondents felt that governments should only provide financial aid during the COVID-19 crisis to companies that take demonstrable measures to significantly reduce their impact on the environment.

It has been made abundantly clear how strongly consumers feel about the importance of being environmentally responsible. With this in mind, it’s time for companies to step up and put plans in place to meet this demand, not just for the good of the bottom line, but for the future of the planet.

And an excellent place to start, is with the adoption of EVs.

What’s next for EVs and UK and European businesses

With electric mobility vital in ensuring a sustainable future, it’s no surprise to see that action is already being taken to address companies’ slow start in catering to EVs and the consumers who rely upon them. 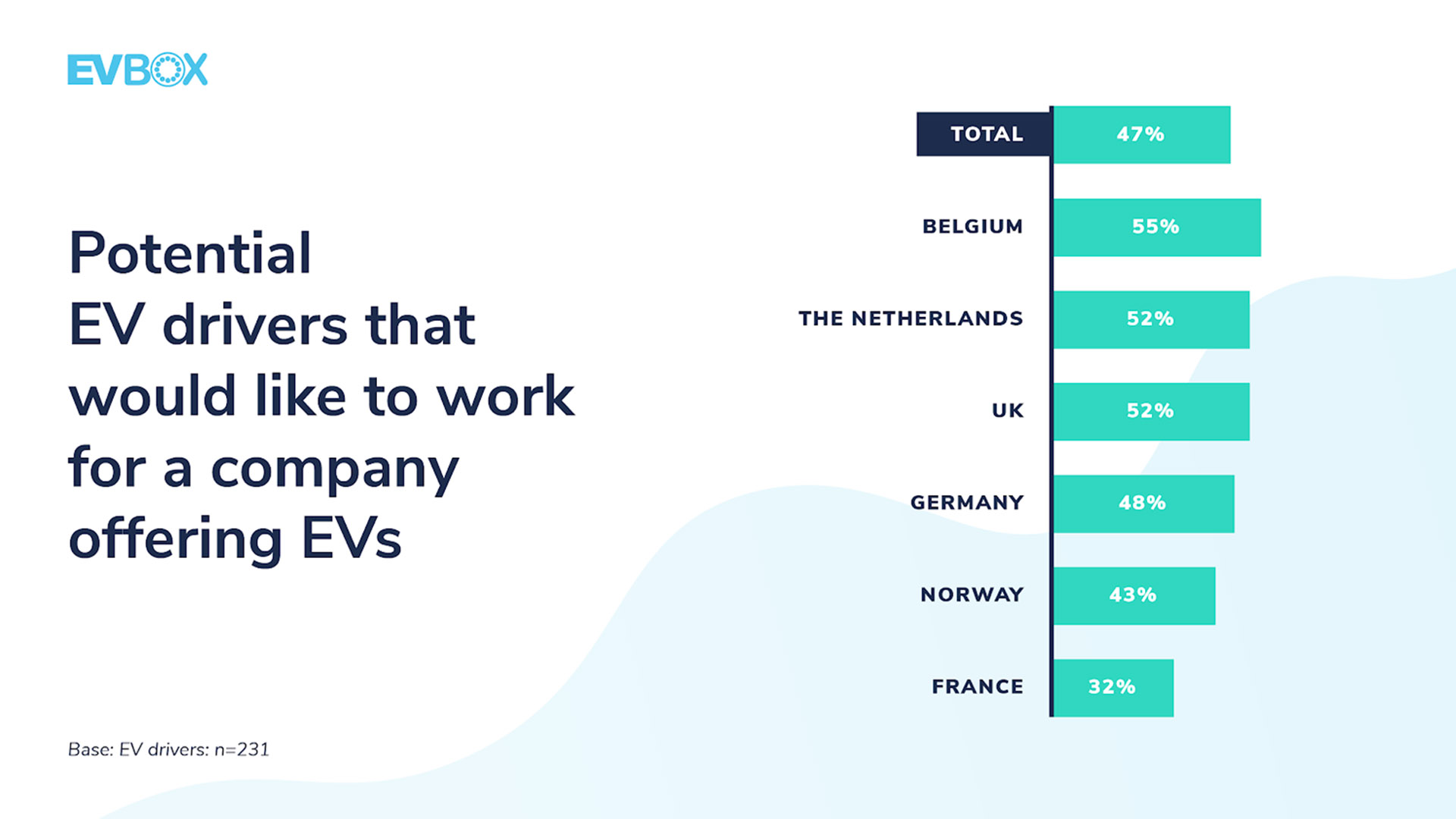 Current initiatives, like the voucher-based scheme in the UK, which covers up to 75% of purchase and installation costs of 40 charging stations for companies, are also playing their part. Similarly, EV owners in the Netherlands pay a reduced fee for tax (8% in 2020) instead of the standard fee of 22% for their corporate car.

Grants can also be applied for in the UK and many European countries, covering certain percentages of costs associated with installing charging stations for companies and public entities. For example, the UK government currently offers a grant for up to £350 per charging port. Berlin-based companies, for example, can apply for funding covering up to €2,500 per AC charging station and up to €30,000 per DC fast charging station. 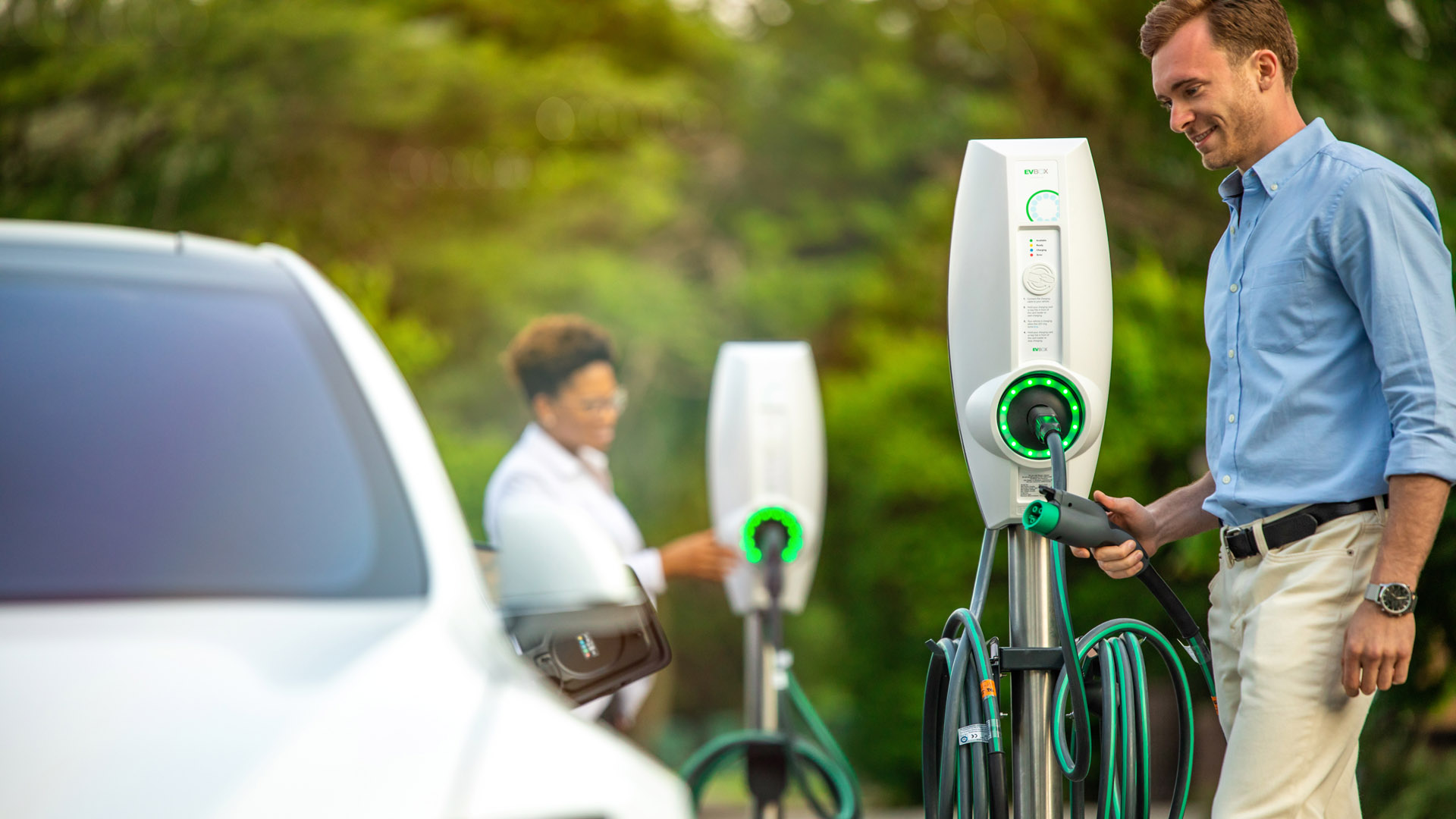 What this research confirms is that businesses are under pressure to adopt electric mobility – and that this pressure is well placed. Many businesses have been slow to act so far, but they now have the chance to lead by example by electrifying their fleets and encouraging their employees to use EVs. The key to this happening, and to delivering a future of electric mobility, will be the provision of charging infrastructure at workplaces.

Thankfully, there are an increasing number of opportunities for businesses to make sustainable transportation a reality, and to meet the needs of employees, society, and our planet. While there is still much work to be done, the growing desire to encourage the adoption of EVs indicates we are on the right path.

How to lower the cost of EV insurance