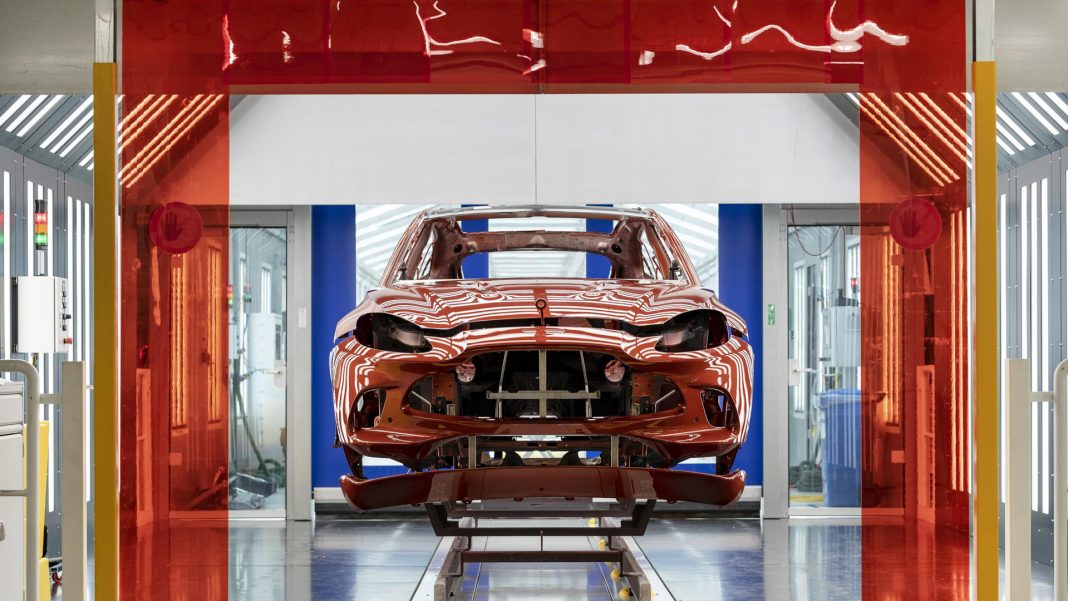 The UK new car market declined -44.4% in March, according to figures published today by the Society of Motor Manufacturers and Traders (SMMT). In the important plate change month, 203,370 fewer cars were registered than in March 2019, as showrooms closed in line with government advice to contain the spread of the coronavirus.

The performance represented a steeper fall than during the 2009 financial crisis and the worst March since the late nineties when the market changed to the bi-annual plate change system. With lockdowns taking place in many European countries earlier than the UK, even more dramatic falls have been reported elsewhere, with Italy down -85%, France -72% and Spain down -69% in March. 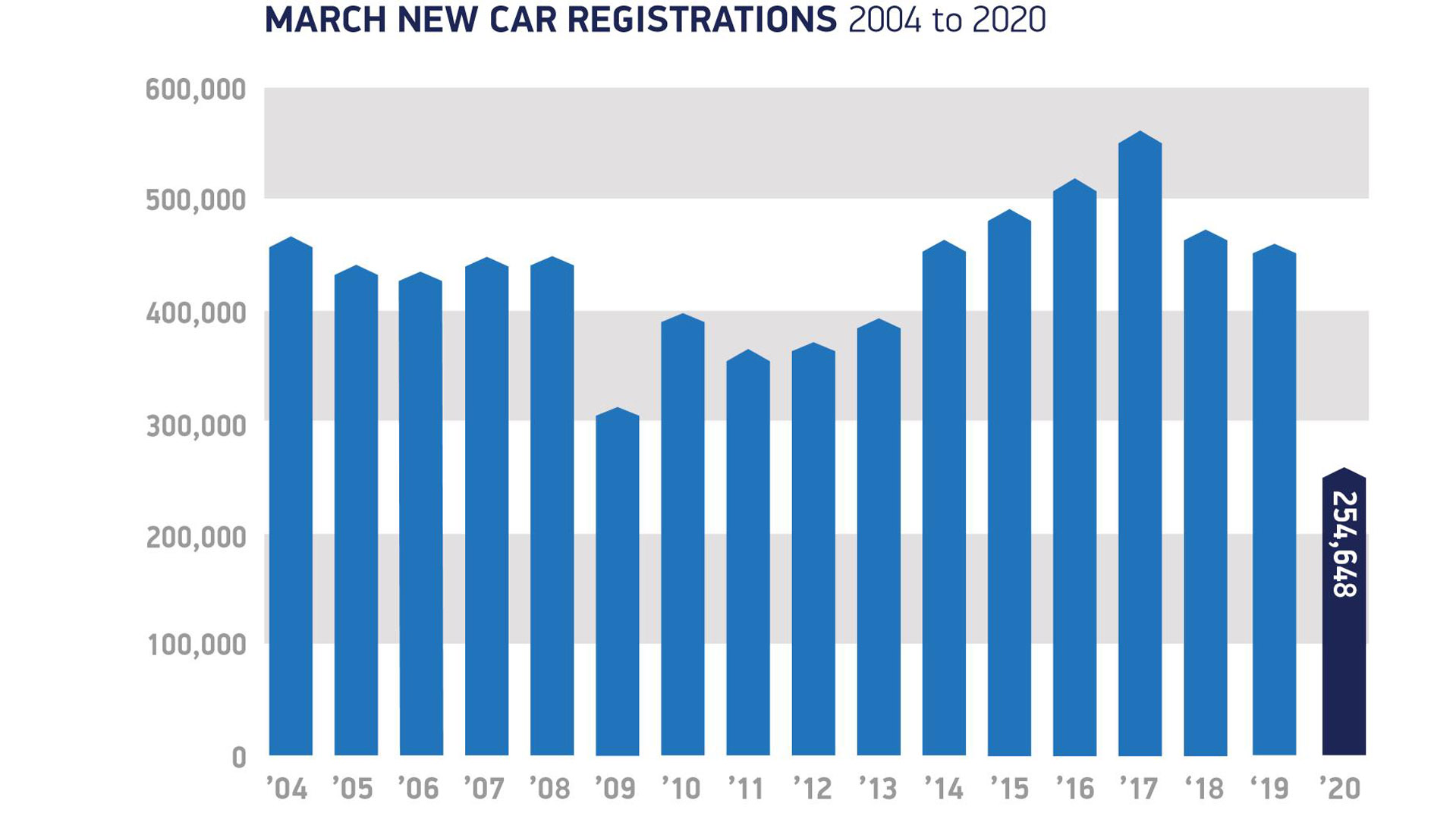 There was some good news for early adopters, who were able to take delivery of the latest alternatively fuelled cars before the crisis took hold in the UK. Registrations of battery electric vehicles (BEVs) rose almost three-fold in the month to 11,694 units, accounting for 4.6% of the market, while plug-in hybrids (PHEVs) grew 38.0%. Uptake of hybrid electric vehicles (HEVs), however, fell -7.1%.

While many car showrooms are likely to remain closed for the coming weeks, companies are still working to ensure deliveries to critical workers, and the industry is also striving to keep sufficient service and repair workshops open to maintain vehicles which are helping to deliver essential goods and services across the country.

The news comes as SMMT downgrades its interim market outlook for the year to 1.73 million registrations – a -23% decline on the previous outlook made in January and some -25% lower than the 2.31 million units registered in 2019.  A further outlook will be published in April to reflect the latest conditions. 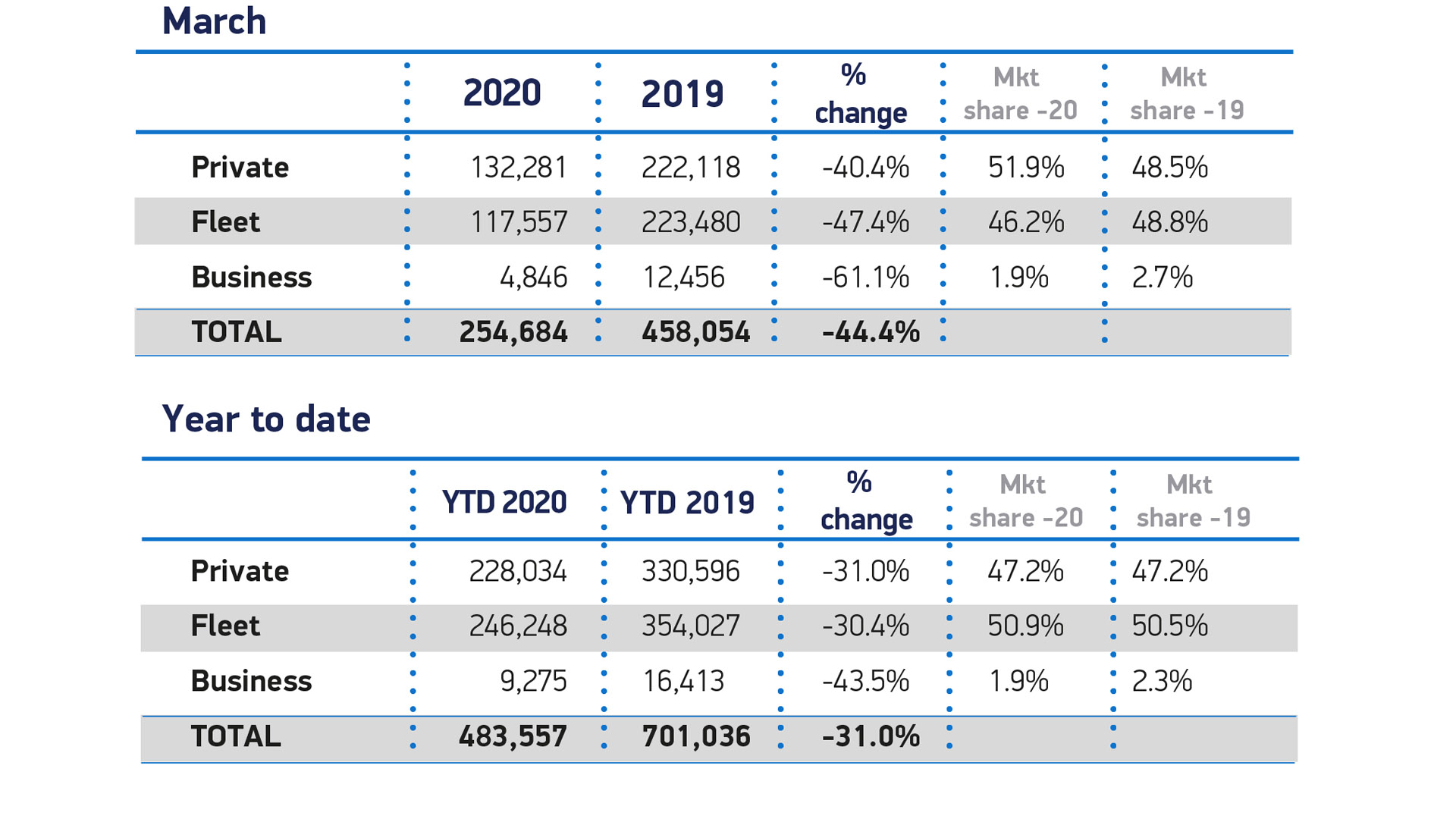 Mike Hawes, SMMT Chief Executive, said, “With the country locked down in crisis mode for a large part of March, this decline will come as no surprise. Despite this being the lowest March since we moved to the bi-annual plate change system, it could have been worse had the significant advanced orders placed for the new 20 plates not been delivered in the early part of the month. We should not, however, draw long term conclusions from these figures other than this being a stark realisation of what happens when economies grind to a halt.”

“How long the market remains stalled is uncertain, but it will reopen and the products will be there. In the meantime, we will continue to work with government to do all we can to ensure the thousands of people employed in this sector are ready for work and Britain gets back on the move.”

Despite the challenges, car manufacturers and their retail networks are providing volunteers and diverting resources and funding to help the national effort during the pandemic. 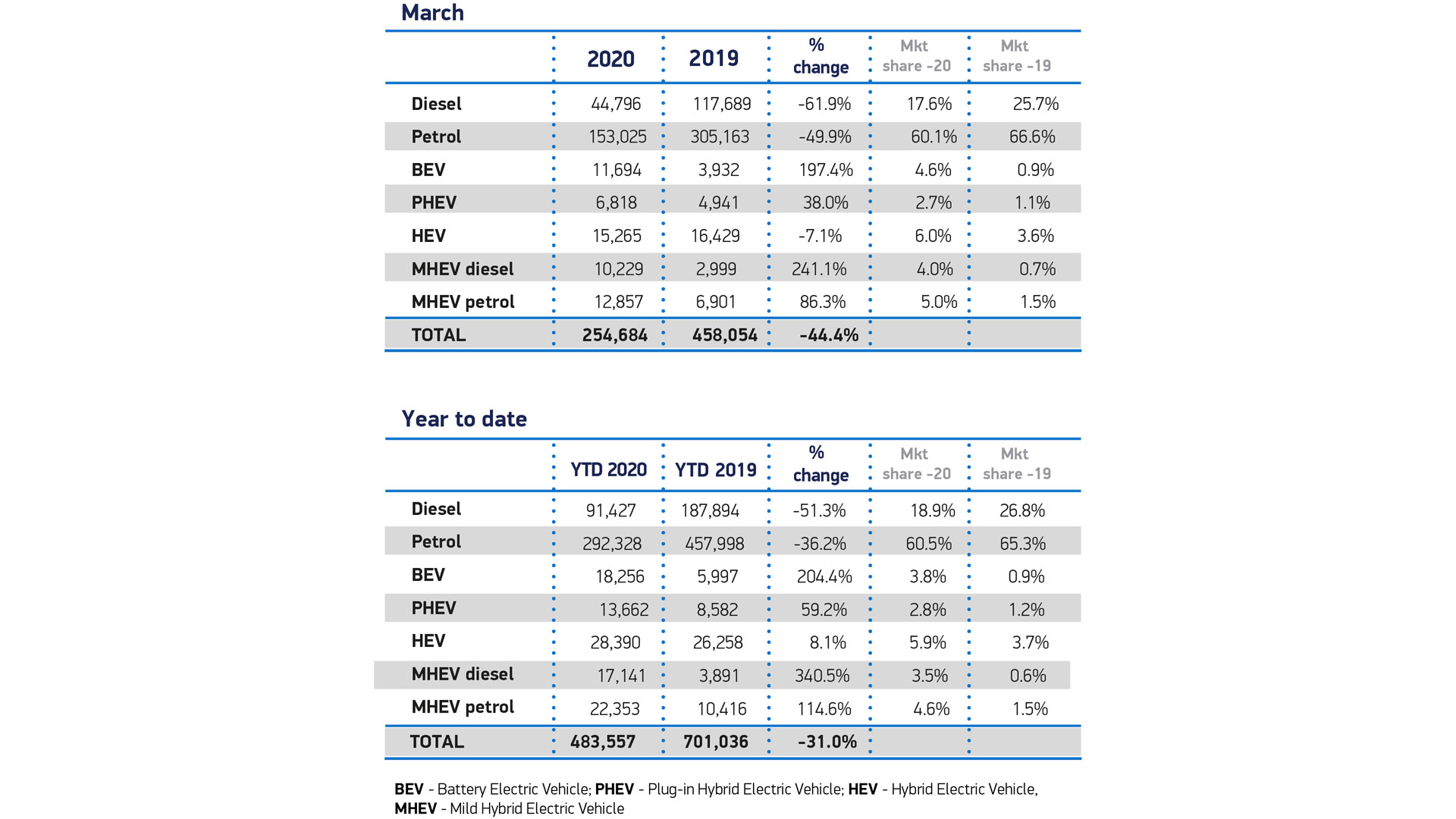 Hundreds of vehicles have been deployed in local communities across the UK, helping front-line workers and volunteers in the emergency services, welfare and charity sectors to look after society’s most vulnerable.

Other supportive efforts include providing breakdown assistance for NHS workers, converting premises into storage and food bank facilities, supplying personal protective equipment such as safety goggles and face shields and working alongside other sectors to scale up ventilator production.