The Audi A3 is a small-sized car that oozes style. We found it fun to drive but doesn’t deliver a good bang for your buck, as the plug-in hybrid model starts from £33,060.

In terms of its audio system, the A3 comes with a six-speaker configuration. One can opt for the £1,195 ‘Comfort and Sound’ pack, where alongside a few other extras, adds a 15-speaker Bang & Olufsen system with 3D sound that outputs an impressive 680 watts of power. On review is the stock system.

To tinker with the vehicle’s audio settings, one has to navigate to the appropriate menu on the 10.1″ infotainment system. Alongside a few basic car volume settings, you’ll find a two-band equaliser – here are our optimal settings:

It’s a shame not to see a differentiation between the mid and high frequencies, where separating the two could have yielded better results.

To connect up to the vehicle’s system, you can opt for a wired or wireless connection, both Apple CarPlay and Android Auto are supported. Over Bluetooth, the system caters for the SBC and AAC codecs – the latter being the better out of the two, as it transmits at a higher quality.

As for media controls, they can be accessed through the display, a clever semi-touch-based rotary dial by the centre console or via the physical buttons found on the right-hand side of the steering wheel.

For a demo of the Audi A3 TFSI e’s audio system head on over to our YouTube channel.

Given the omission of a subwoofer, listening to Chip’s take on an old school classic, ‘Lumidee’, fails to impress. The pronounced low-end rumble is cut short, where one can’t fully enjoy that iconic bassline.

The system’s mid-bass response is similarly tame, where it lacks presence. It can, however, be changed with a few notches added onto the ‘Bass’ EQ. This springs the system into life. While the stock speakers can’t conjure up a convincing sub-bass response, nor can produce a controlled mid-bass; the latter frequency can certainly be felt throughout the cabin, making for a lively experience. 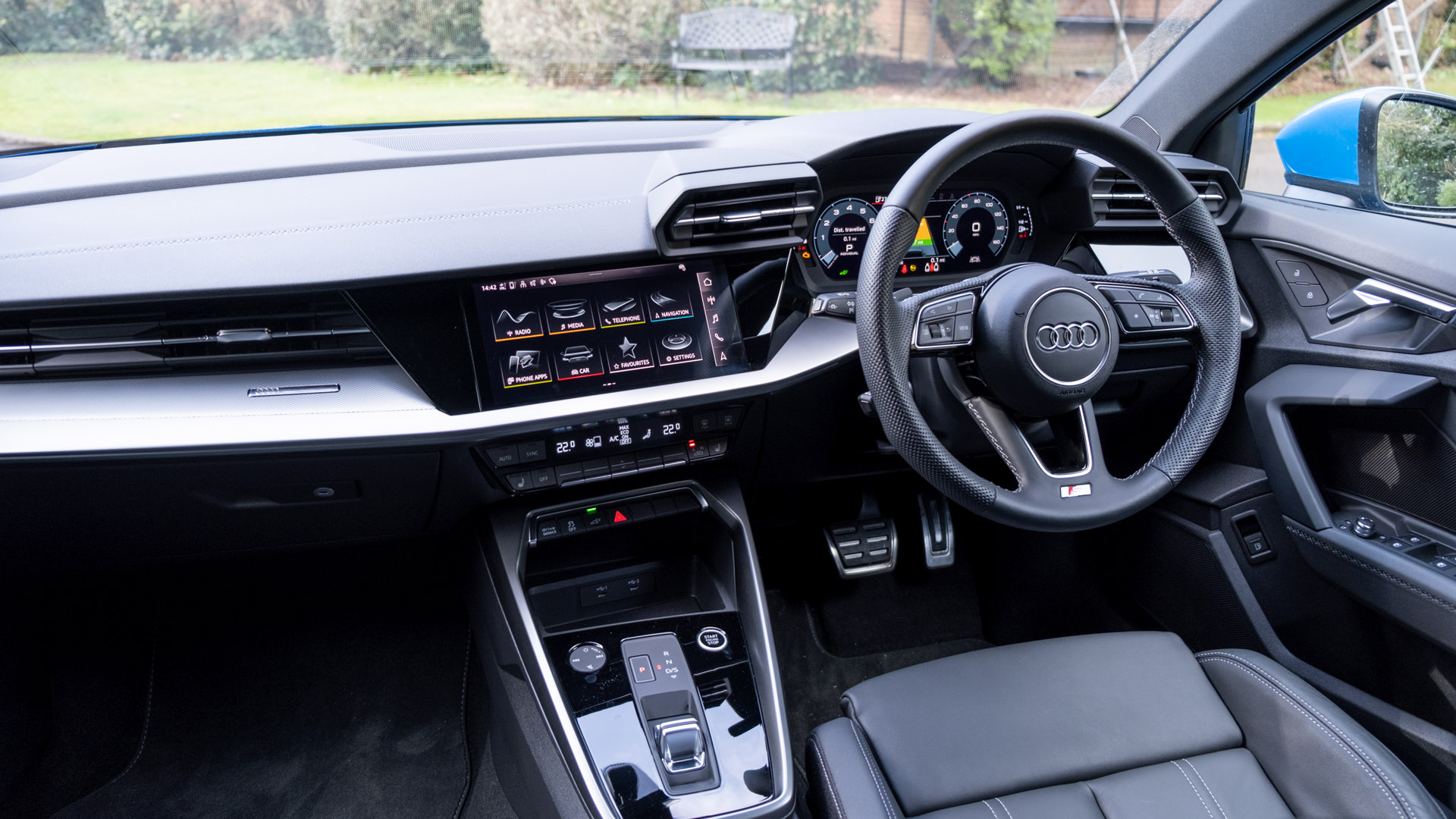 The mids aren’t too shabby either, where the speakers manage to output an accurate sound across the frequency range. While they do sound a touch recessed, namely in the lower mid-range, adding three notches to the ‘Treble’ EQ does bring the upper mids toward the foreground resulting in a likeable sound.

There is a real zing to the high-end frequencies, where at the front of the cabin, the tweeters help in providing a fantastic top-end extension. It should be noted that at the rear of the cabin, the singular full-range drivers don’t provide the same level of excitement.

You might, however, want to decrease the ‘Treble’ EQ setting when driving on the motorway. As the car suffers from a bit of cabin noise, turning up the overall volume of the system helps alleviate the issue. This, in turn, makes the highs sound overzealous and can sound a touch fatiguing; of course, that’s dependent on your hearing range and tolerance levels.

Onto the soundstage, it’s a double-edged sword. On one hand, the overall width and depth fail to deliver a sense of openness, while on the other, instruments throughout D-Nice’s latest song featuring Ne-Yo’s vocals ‘No Plans for Love’ are flawlessly separated. The addition of extra drivers throughout the cabin could have aided the vehicle’s ability to reproduce a spacious soundstage. 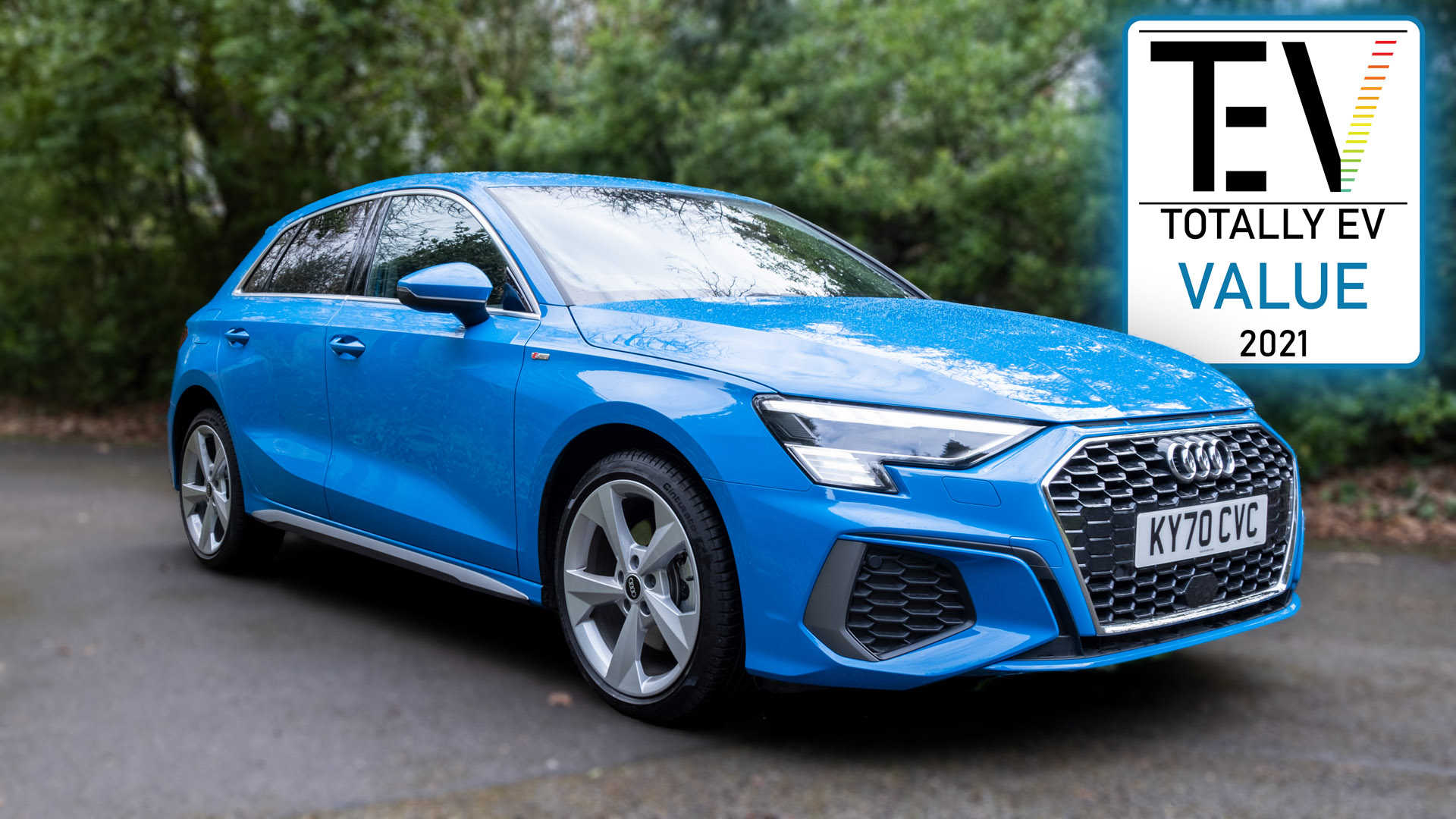 Granted, the Audi A3’s stock six-speaker system isn’t perfect, where its sub-bass tones fall short and its soundstage could be wider. Still, it’s a competent all-rounder where most owners will be pleased with the overall sound reproduction. Given the fun-sounding system comes as standard, it receives TotallyEV’s Value award.

If you’re into music or classify yourself as an audiophile, we’d definitely suggest looking into the B&O system upgrade, where it adds a much-needed subwoofer in the boot that helps output low-end tones, and nine audio drivers that bolster the system’s soundstage.