Citroen has been part of Groupe PSA since 1976, and its latest vehicle to market represents a first for the group: the e-C4 is the manufacturer’s first C-segment all-electric SUV.

To give choice to its customers, the French automaker has decided to launch its new vehicle in numerous trims and powertrains. The Citroen C4 is available in a naturally aspirated petrol or diesel engine, while the e-C4 emits zero emissions thanks to its electric motor.

There’s not much between the electric models, and if one were to get the SUV as a company car, it would make even more sense to save on Benefit-in-Kind taxation in comparison to its petrol or diesel counterparts; not to mention inner-city charges and the effect gasoline vehicle have on the environment. 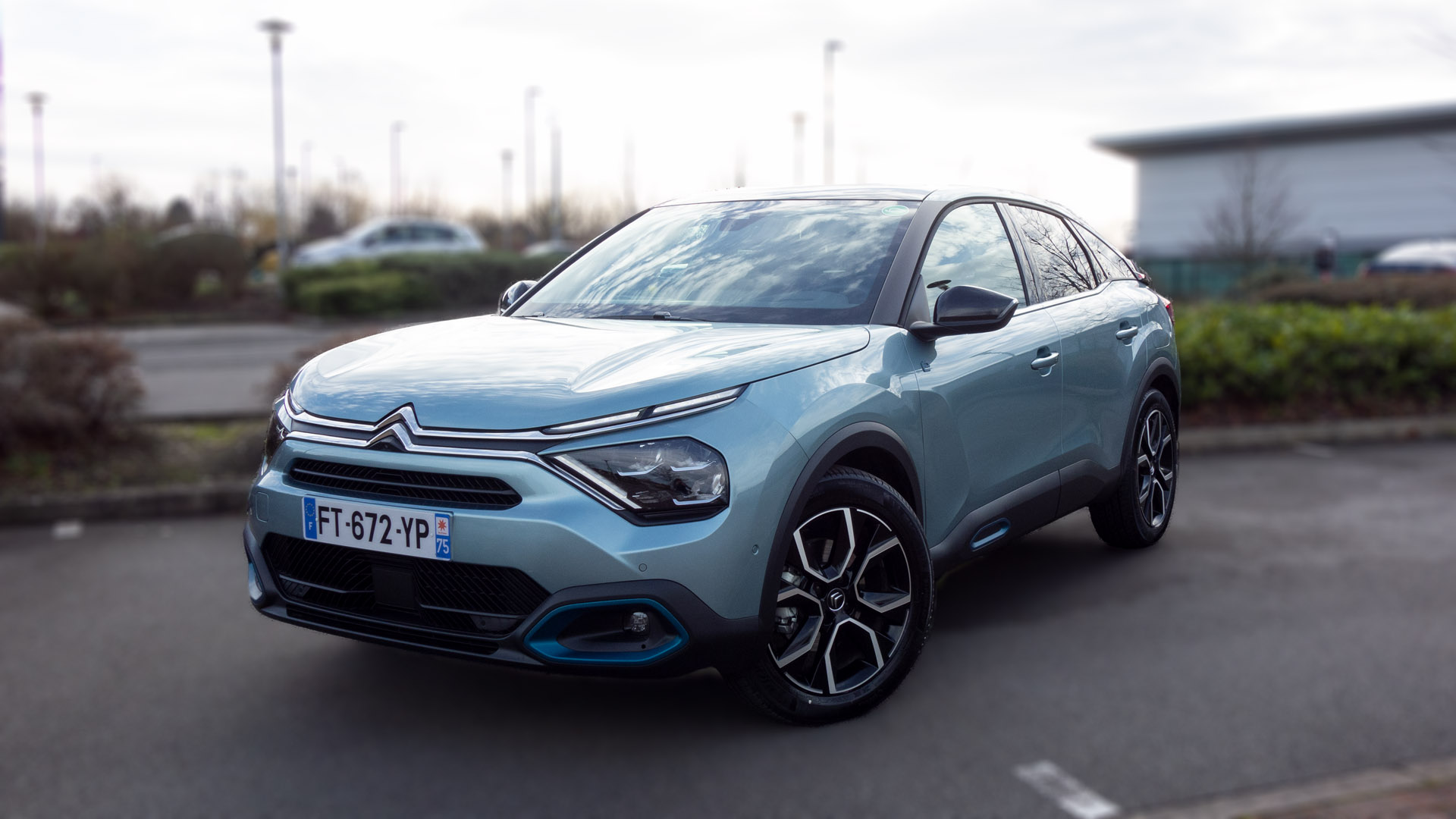 We digress, the Sense Plus comes with the following options as standard:

Move up to the Shine, and you’ll get extra additions: 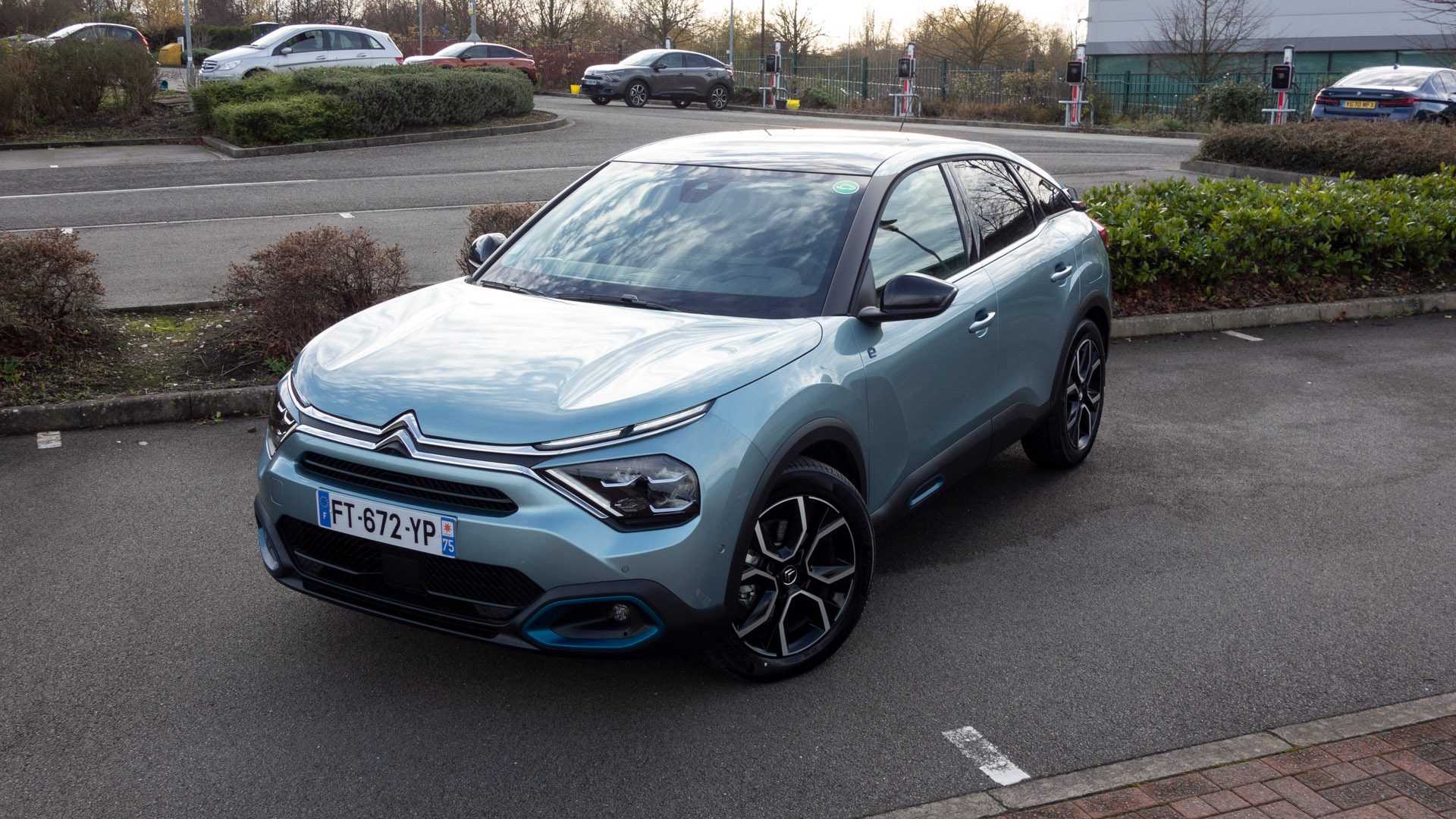 The top-spec Shine Plus goes a step further and adds:

Despite a few differences within the cabin, the e-C4 is near-identical from the exterior. The front of the vehicle has aggressive styling that originates from the headlights’ design. The Citroen badge also cleverly integrates itself with a chrome finish and housed a camera to aid with driving assistance. A few blue inserts also make the e-C4 stand out from its gasoline variants, reminding road users that it’s a pure electric vehicle. Stylish 18″ alloys rims also come as standard.

Along the side of the SUV are overly large plastic inserts – from the sideskirts to the wheel arches. Its side profile, in our opinion, doesn’t quite match the rest of the car’s premium design. We passed the same judgement on the Hyundai Kona Electric, Kia e-Niro and the MG ZS EV. We’d have liked to see a body-coloured trim, such as on the Audi e-tron, though the latter vehicle costs roughly three times the asking price.

The same could be said about the rear design, which is treated with an oversized plastic bumper. On the plus side, smartly placed air ducts and stylistic taillights give the e-C4 some personality.

Jump inside the vehicle and you’ll get an immediate sense of luxury. The dashboard has a premium feel to it, while the seats are a cushiony soft. In fact, these might be the softest and comfiest car seats we’ve ever sat in – made out of high-density foam, with a thick 15mm of extra textured foam on the surface, all five seats within the e-C4 are remarkably comfortable. A definite highlight of the SUV and one that sets it apart from its competitors – namely at this price point. Lumbar support further betters the experience.

As for headroom and legroom, it’s plentiful at the front, especially given the front seats are fully adjustable. It’s equally spacious at the rear, where 6-foot (182cm) individuals won’t feel henned in.

When it comes to storage space, there’s 380 litres of space in the boot, and with the seats propped down, this figure extends up to 1250 litres. This should suffice for most, though, isn’t as spacious as some of its competitors. There’s space to fit in a 500ml water bottle in the front doors and a small compartment for rear occupants, too.

In terms of practicality, Citroen has seemingly put in the effort to design a cabin that will appease most consumers. At the front, there’s a conveniently placed wireless charging pad (only applicable in the Shine Plus), a USB Type-C and Type-A port for charging, a 12V socket and storage for small valuables. By the centre console, there are two cupholder spaces, which can be concealed by a retractable plastic cover.

Physical climate controls reside by the centre of the dashboard, making it easy to tinker with the vehicle’s cabin temperature. It is, however, slightly odd that when adjusted, the temperature and fan speed aren’t indicated on the 10″ display placed just above. Through the infotainment system, one can adjust the vehicle’s settings and set an EQ; we found the overall tonality of the stock system to be pretty competent.

The e-C4’s system does also support Android Auto and Apple CarPlay, which are a welcome and unsurprising addition to the modern-day SUV.

A 5.5″ instrument cluster sits behind the steering wheel, where it displays key information; here, there’s no customisation. Onto the steering wheel, it’s got a slightly unconventional design – it’s not quite circular and instead has a near-flat top and bottom edge, making it seem smaller when gripped.

This does have an effect on the driving experience – it leads to an easier drive. The smaller steering wheel makes for easier manoeuvrability and with its lightweight feel makes for a tireless drive within inner-city commutes. Its turning circle also sits at 10.9m.

Onto Citroen’s ‘Progressive Hydraulic Cushions’ suspension system, it yields a good first impression. The SUV doesn’t suffer from too much body roll, nor does it feel stiff when going over speed bumps or potholes. 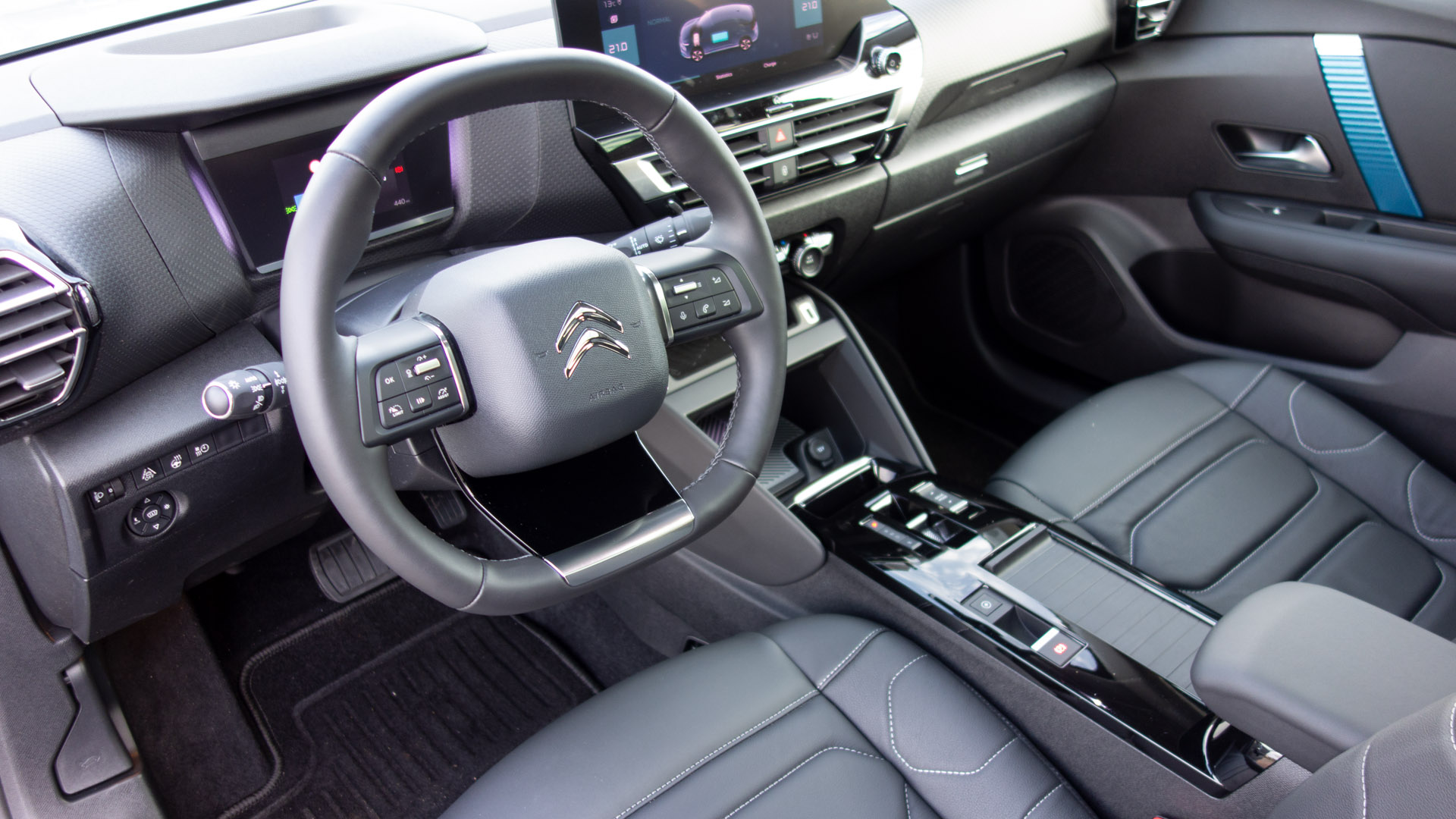 As for performance, the e-C4 houses a single front-mounted electric motor that dispatches 100 kW (134 hp) of power, which propels the vehicle to 60 mph in under 9 seconds. As it operates on an all-electric powertrain, there’s no lag in its power delivery. Furthermore, its accelerator pedal is responsive, namely in Sport mode.

What will turn a few heads, however, is its all-electric driving range. Citroen claims up to 217 miles on the WLTP cycle, which if true, would mean it sits in-between the MG ZS EV (163 miles) and the Kia e-Niro (282 miles), a perfect place to be given its asking price. Our first impressions on its driving range are positive, but we’ll reserve judgement in terms of its realistic driving range for when we get the e-C4 in for review. 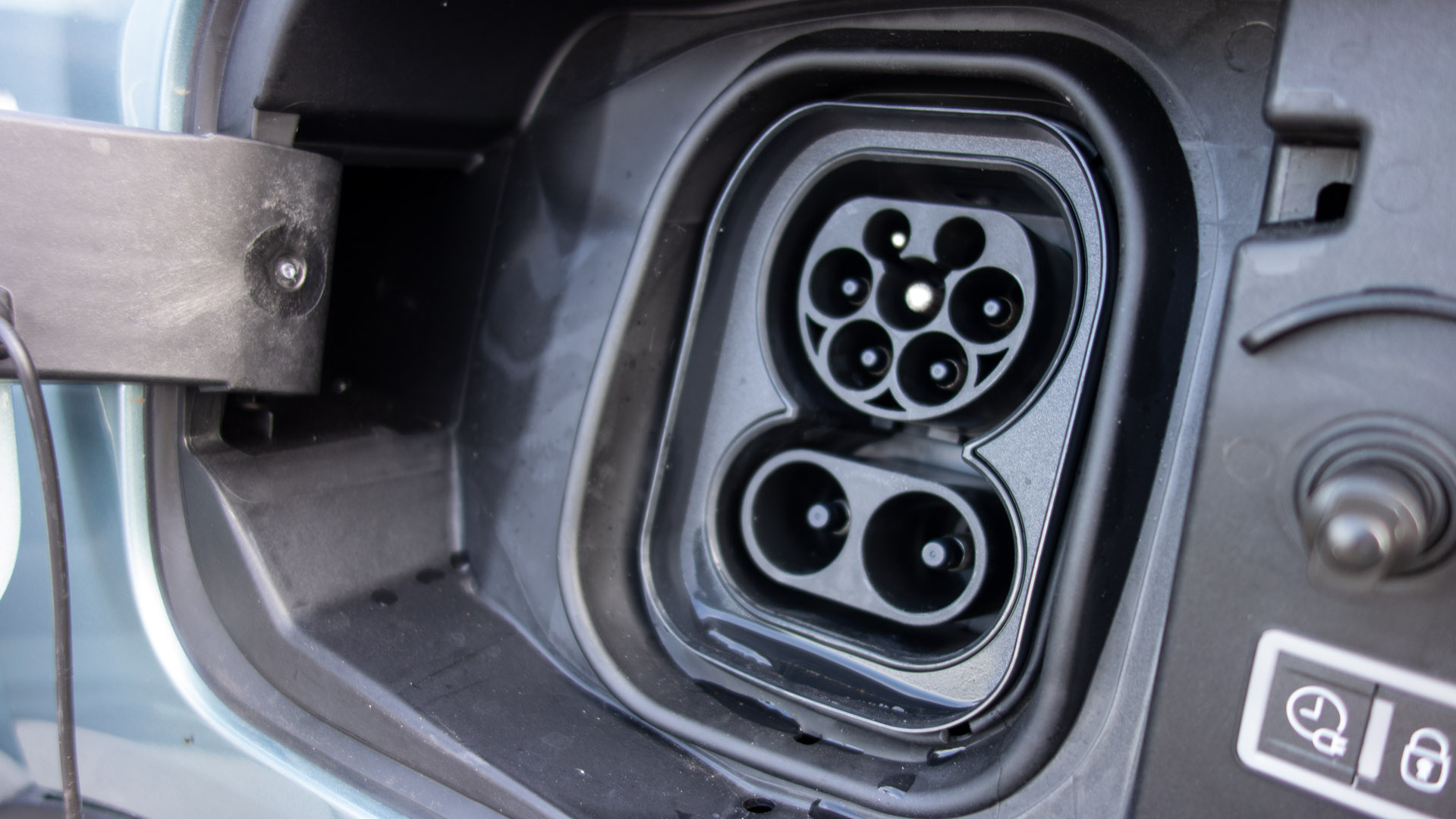 To recharge its 50 kWh battery pack, Citroen has included support for a 100 kW CCS rapid charger, meaning an 80% charge from empty will take just 30 minutes. Move over to a slower 7.4 kW wallbox or workplace Type 2 charger and it’ll get to 100% charge in seven hours and 30 minutes.

It’s great to see that the French manufacturer has added rapid charging to its foray, as it futureproofs the vehicle; more rapid chargers are being installed throughout the UK and around the world, so this makes for a sensible addition by the automaker. 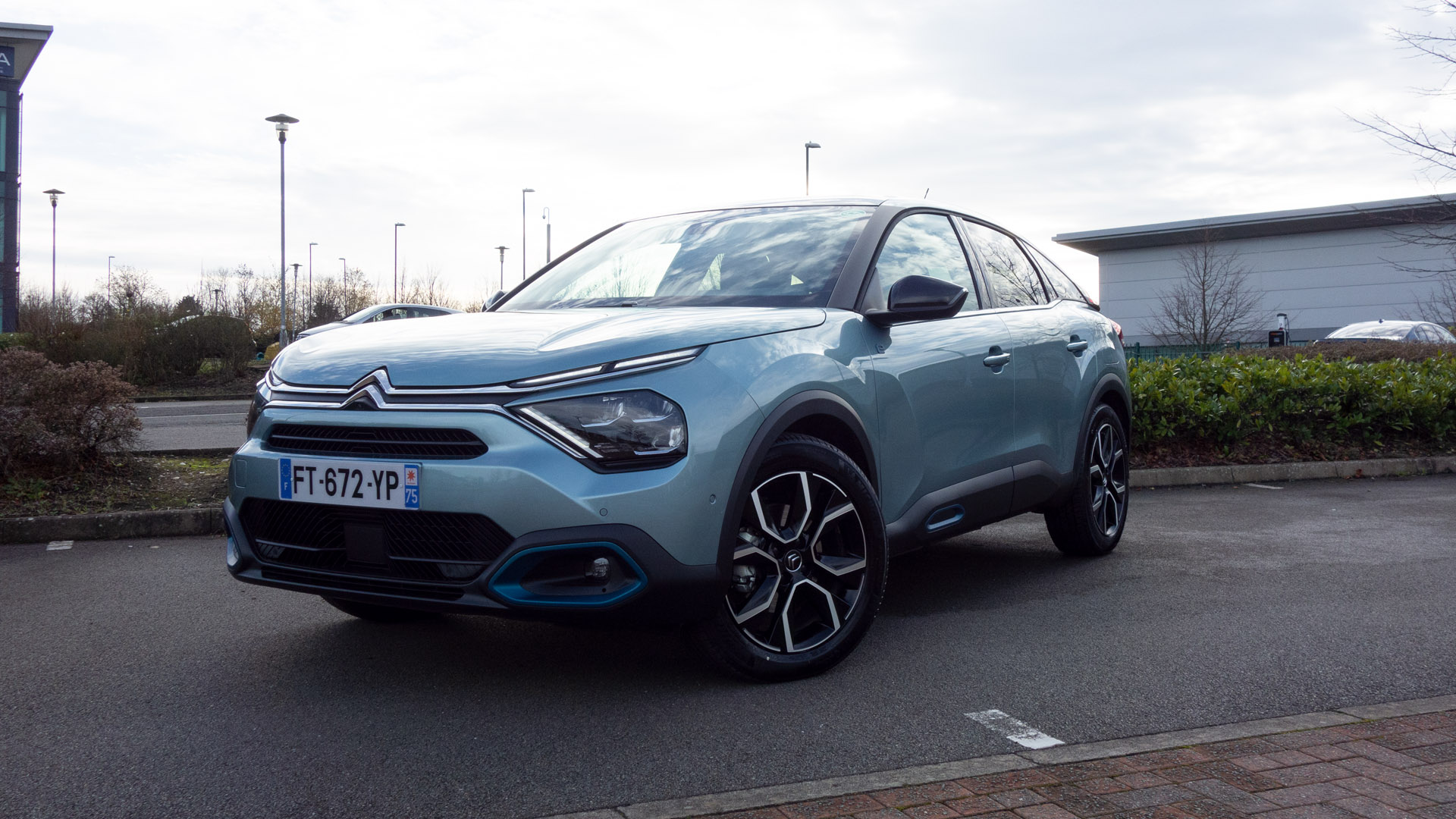 On the whole, our first impressions are extremely positive. Citroen has seen a gap in the market and has released a practical, comfortable, and an all-electric SUV that will also go the distance.

With the current crop of competitors either offering less range or a more premium price tag, the e-C4 strikes the right balance for most consumers. We can see it being an immediate success in the UK and across the other markets.

We look forward to getting the SUV in for review to see how close its claimed mileage gets to real-world usage. In the meantime, we’d love to hear your thoughts on the Citroen e-C4. Let us know in the comments below or via social media; we’re on: YouTube, Instagram, Facebook, Twitter and LinkedIn.