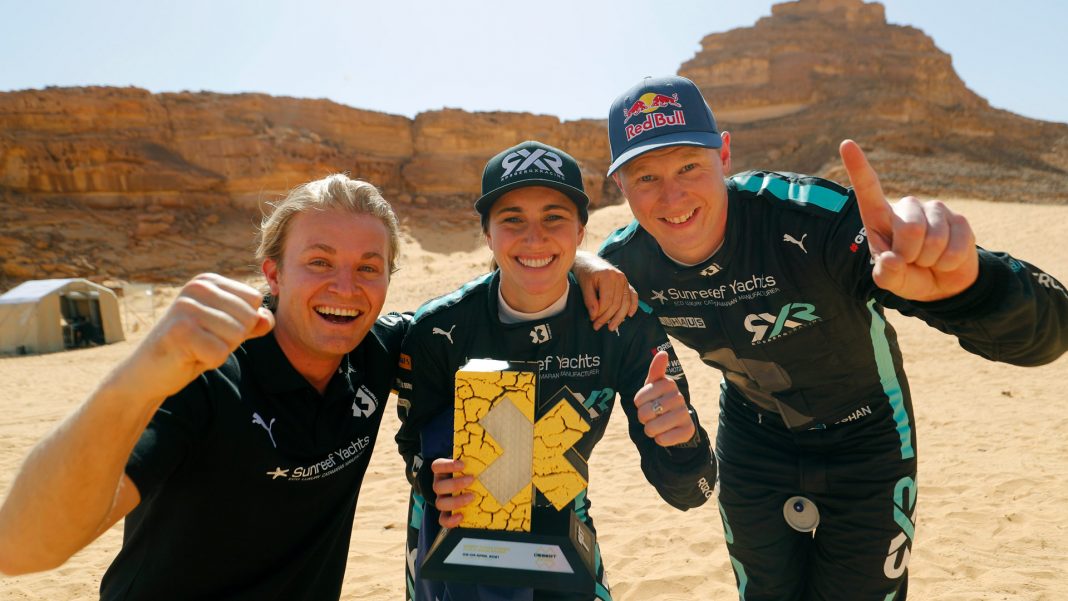 After years of preparation, the first Extreme E race weekend unfolded in AlUla, Saudi Arabia on 3-4 April. There was action from start to finish, where nine teams battled it out in the harsh desert terrain to claim their first Championship points.

Most of the drama took place on Saturday 3 April, where the teams were tasked to set the fastest time in qualifying.

Veloce Racing was the first team to experience difficulties, as a severe crash by Stéphane Sarrazin led to an early retirement. This meant Williams F1 development driver and W Series Champion, Jamie Chadwick, was unable to set a time on the Desert X Prix circuit.

Similarly, Claudia Hürtgen from ABT Cupra XE had a major incident that led the team falling down the pecking order. Alongside Mattias Ekström, the ABT Cupra XE crew qualified in eight place, ahead of the Veloce Racing team. 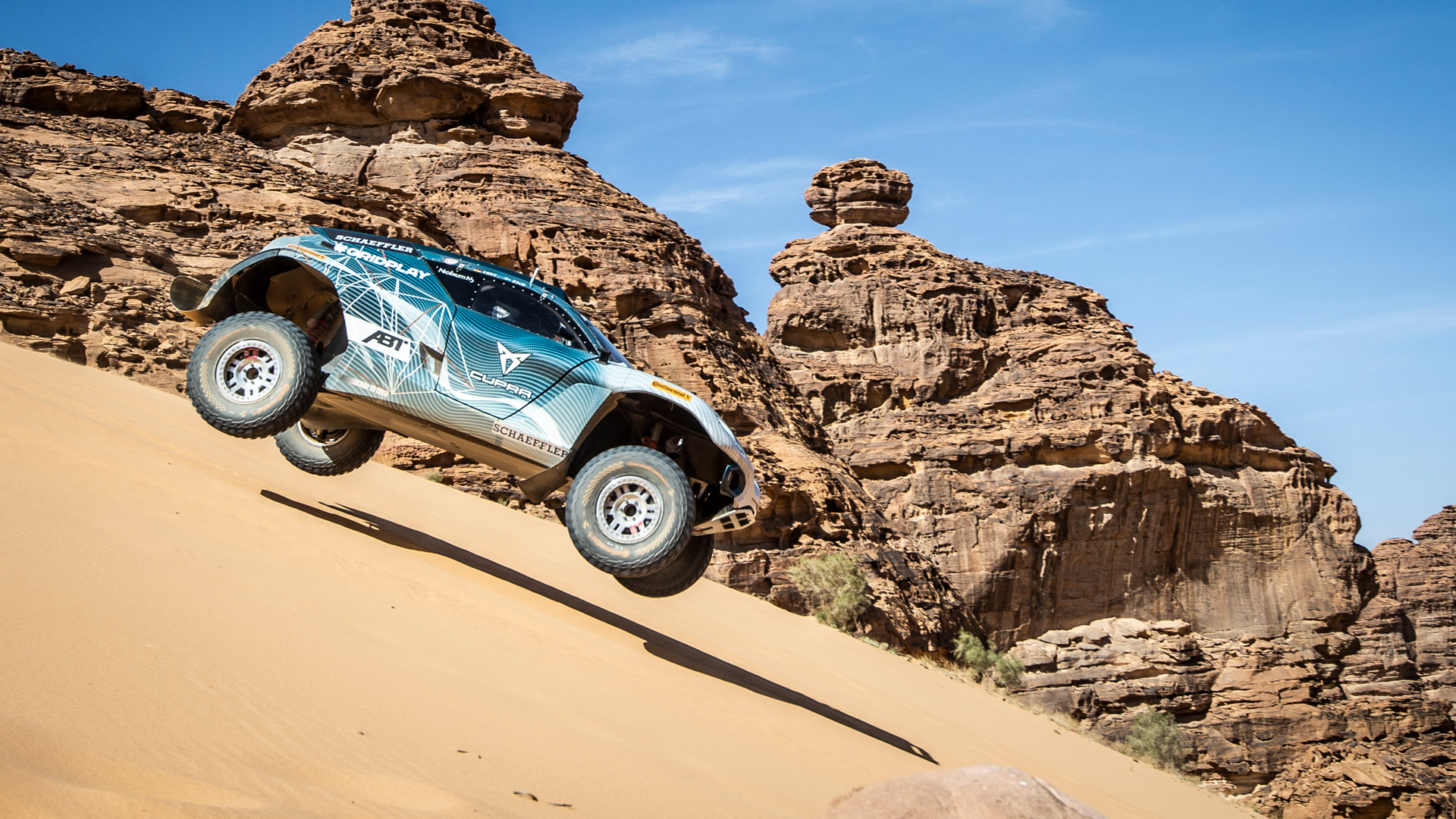 The drama didn’t stop there, as Kyle LeDuc from Segi TV Chip Ganassi Racing suffered terrible mechanical problems following an accident that left his car without any power steering. It gave Sara Price a monumental task to regain lost time but alas, the team finished in seventh and were forced to pull out of the second round of qualifying.

Jenson Button’s JBXE team also suffered a few setbacks, but unlike the aforementioned teams, the drivers were hit with severe penalties after they were found speeding in the pit lane; Mikaela Åhlin-Kottulinsky had issues activating the pit limiter and this resulted in a large discrepancy between the remaining five teams, even though the pairing set a good time in both qualifying sessions. 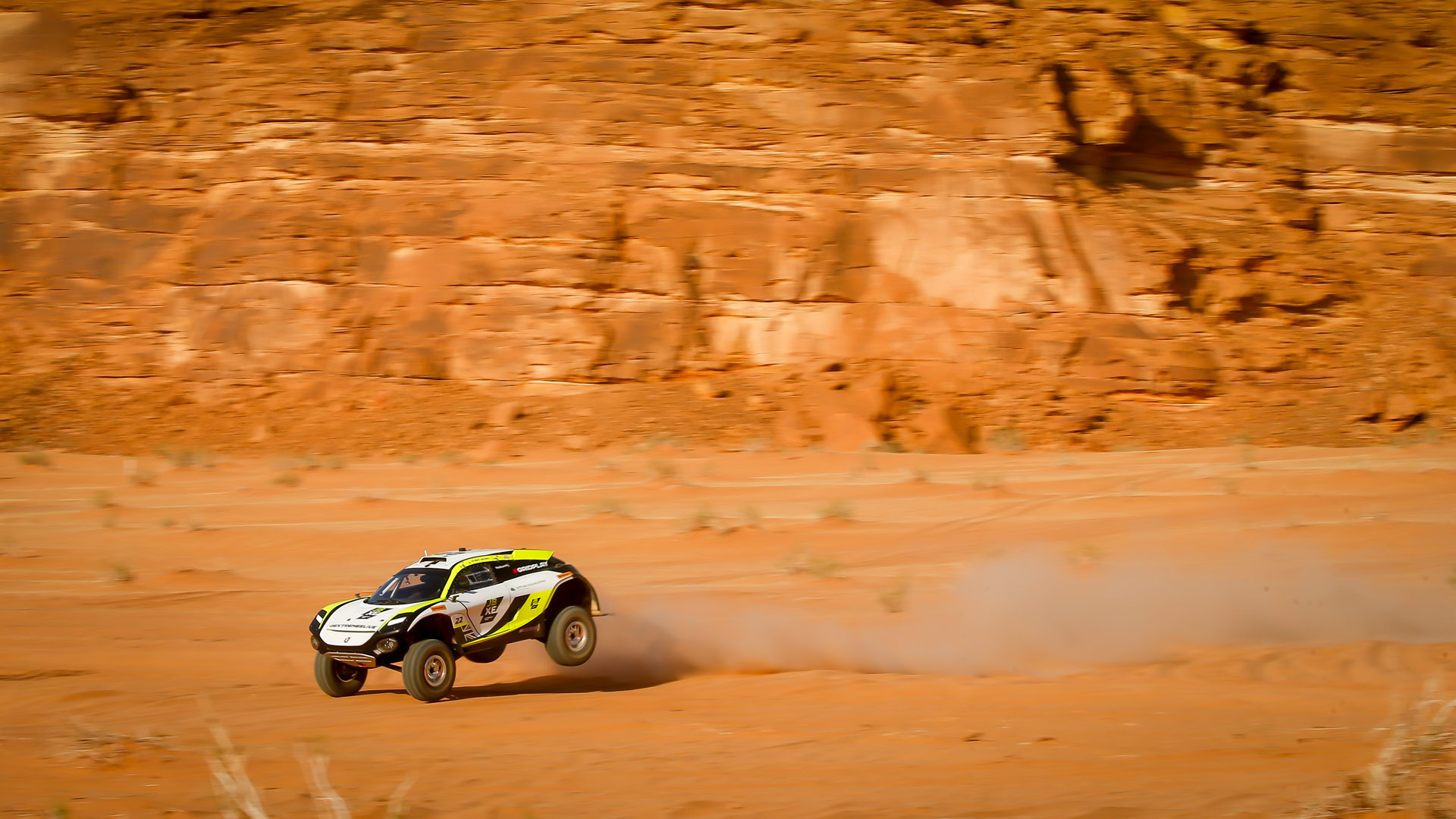 This handed Oliver Bennett and Christine Giampaoli from Hispano Suiza XITE Energy Team a fifth-place finish in qualifying. The pair worked well together in achieving an uninterrupted qualifying session.

Above them sat Andretti United, a team comprised of Timmy Hansen and Catie Munnings where the female racing driver faced a major puncture in an otherwise excellent run. Munnings had a lot to do in her qualifying session, where despite a heroic drive on three wheels managed to steer the team into a fourth-place finish in qualifying. 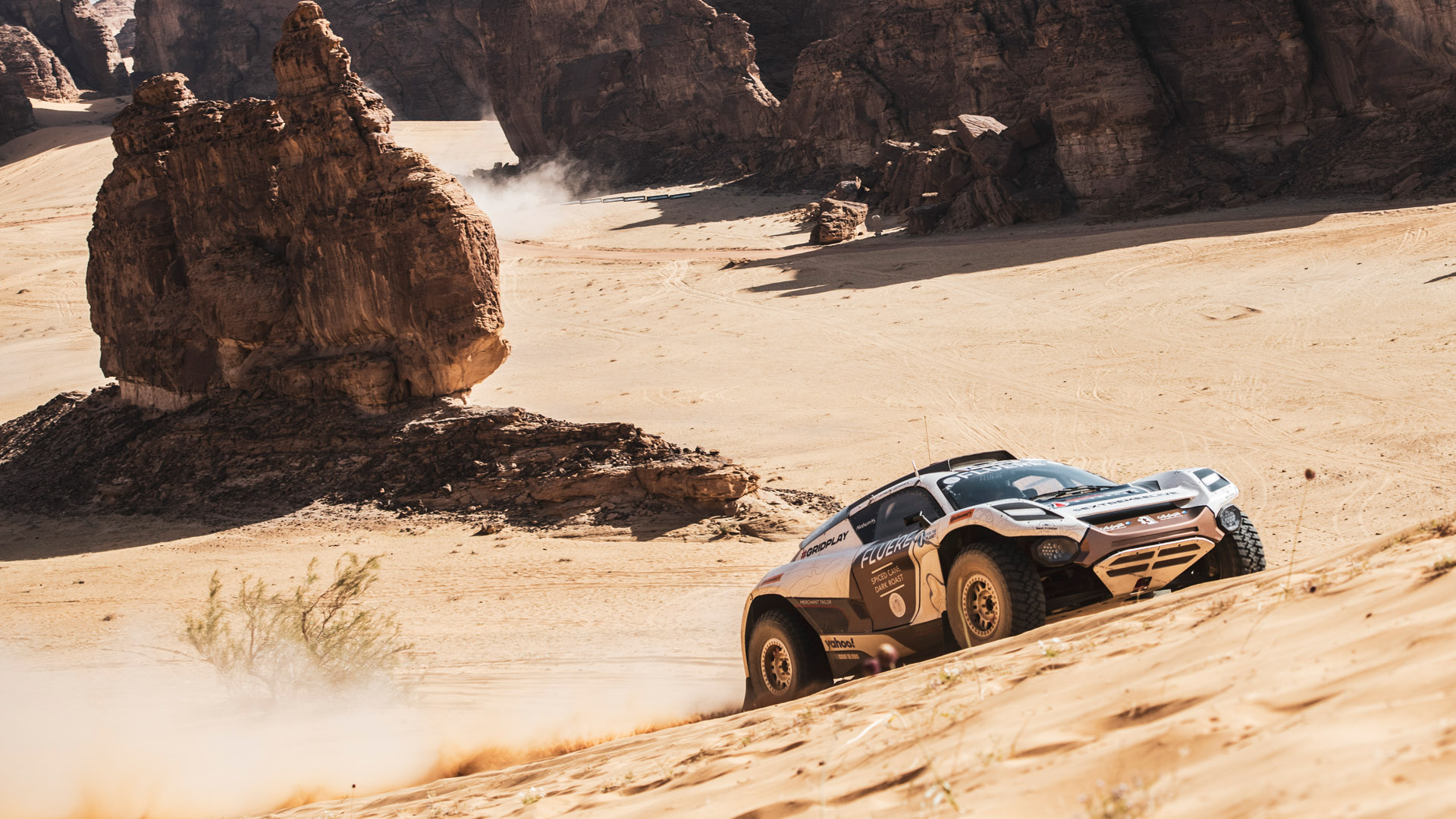 Moving into the top three, Molly Taylor and Johan Kristoffersson driving for Rosberg X Racing set an excellent Q1 time and were on track to finish first overall. However, an error in the pit lane – again with the pit limiter – resulted in a hefty time penalty dropping them to third in the overall qualifying standings.

This, in turn, handed father and daughter combo, Carlos Sainz and Laia Sanz from Acciona | Sainz XE Team, a second-place finish in qualifying. Unsurprisingly, the pair worked well together to take the second spot with Carlos Sainz’s years of experiences in the Dakar Rally showing throughout the day.

Lewis Hamilton’s X44 team secured first place in the overall standings after an excellent showing by both Sébastien Loeb and Cristina Gutiérrez throughout the two qualifying sessions.

Given the format, Extreme E awards Championship points for both qualifying and racing. As a result, the standings after Saturday sat like this:

Watch session one and two of qualifying in full, or the highlights on Extreme E’s YouTube channel.

This led to a tasty race day on Sunday. Here, unlike other motorsports, Extreme E takes on a different format, whereby qualifying times don’t discount you from making it into the final races.

First off was the ‘Shootout’, an opportunity for the three bottom teams in qualifying to fight it out for 7-9th place finishes. It ended earlier than most expected, where Kyle LeDuc from Segi TV Chip Ganassi Racing rear-ended Claudia Hürtgen’s Odyssey 21 SUV after the American driver had very little time to react following a quick turn; this was an issue that arose a multitude of times, as poor visibility meant wheel-to-wheel action was limited in this off-road environment. 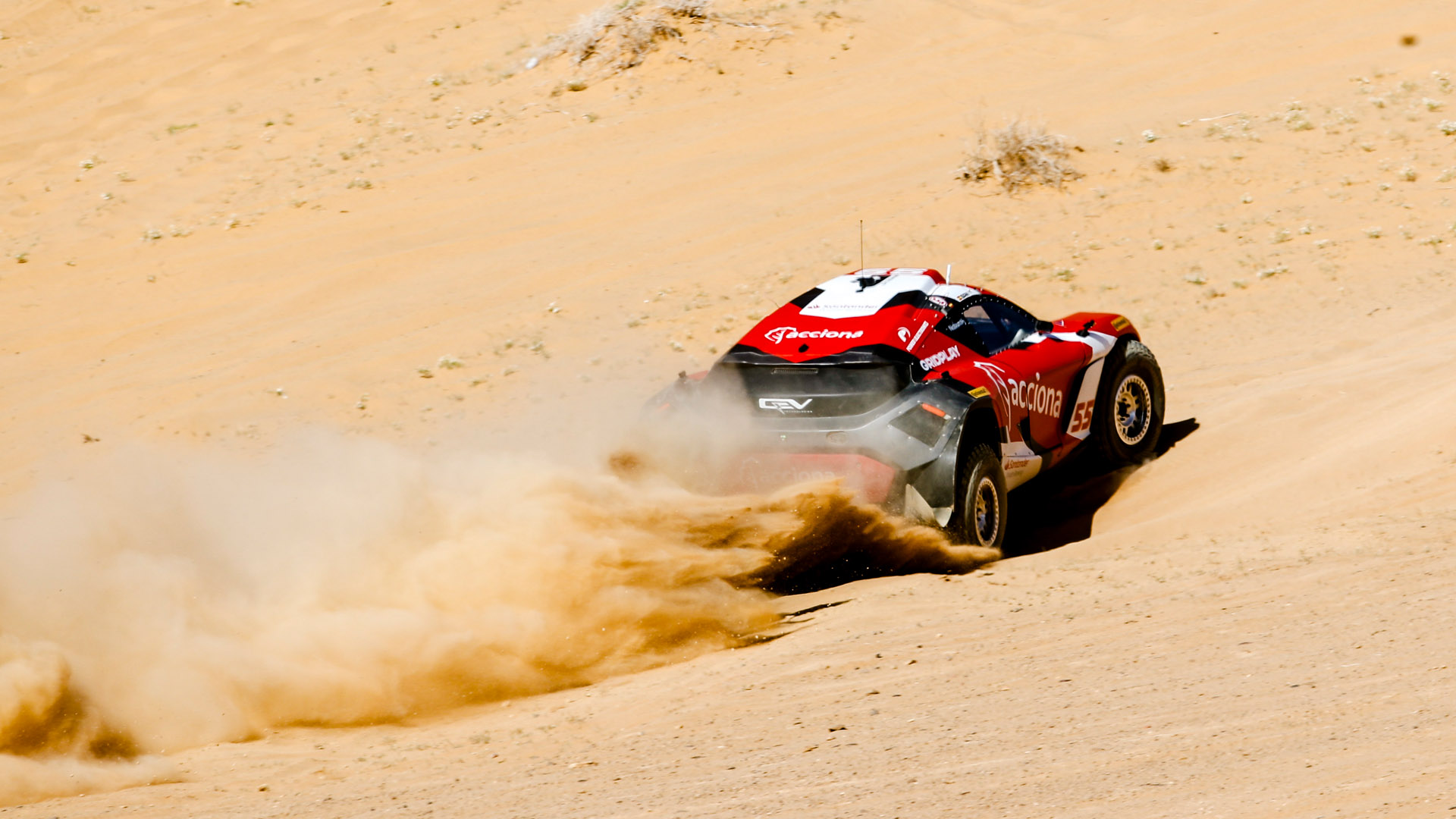 This meant ABT Cupra XE, who finished 7th in the race ended the race weekend with 13 points (8 points in qualifying and 5 points in the race). Segi TV Chip Ganassi Racing finished in 8th place in the race, which gave them a total tally of 12 points (6+6); and with the withdrawal of Veloce Racing, they scored 8 points in total (4+4).

Next up was the ‘Crazy Race’, which would see one team from the three competing progressing to the ‘Final’. Here, Timmy Hansen from Andretti United managed to get a fantastic getaway from the start, launching his Odyssey 21 into first place and making Catie Munnings’ life a lot easier, who came home to take first place in the event.

Hispano Suiza XITE Energy Team finished second with JBXE in third. The race weekend was over for the two aforementioned teams with them scoring 20 (8+12) and 17 (7+10) points in total, respectively.

Then came the ‘Semi-Final’ where the top three teams from qualifying would battle it out to take two of the three available spots to make it to the ‘Final’. There was a few short exchanges at the beginning of the race, but after Johan Kristoffersson from Rosberg X Racing pulled away from his rivals (X44 and Acciona | Sainz XE Team), it allowed Nico Rosberg’s team to comfortably win the ‘Semi-Final’ event.

Sébastien Loeb and Cristina Gutiérrez finished in second, also securing a place, whereas Acciona | Sainz XE Team came third, knocking them out of the ‘Final’. The Spanish duo ended their racing weekend with a tally of 26 points (11+15). 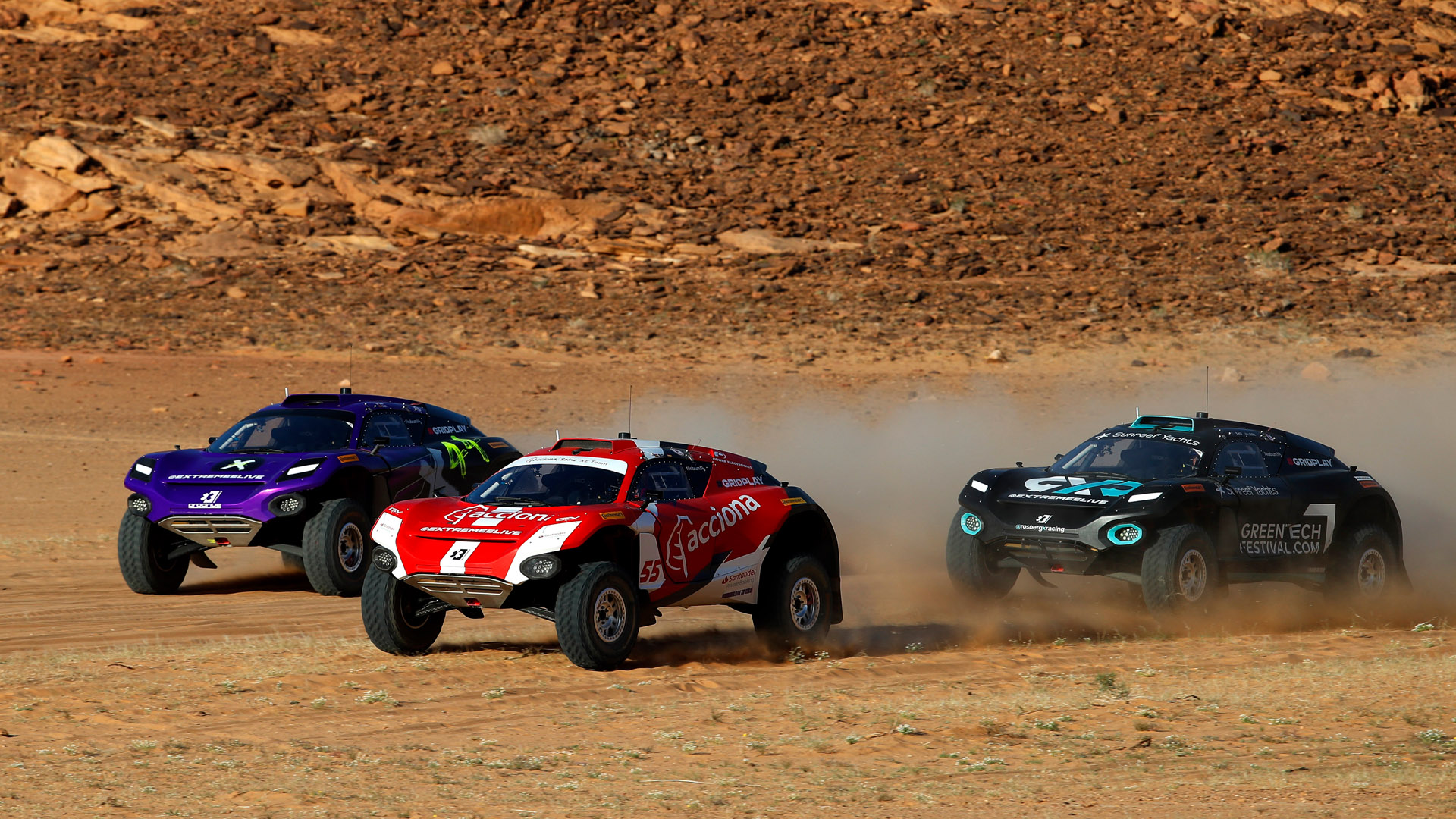 It was all to play for in the ‘Final’ where Rosberg X Racing, X44 and the winners of the ‘Crazy Race’ Andretti United, would battle it out for first, second and third place. Despite an excellent start from Timmy Hansen (Andretti United), he was overtaken by the flying Johan Kristoffersson from Rosberg X Racing who managed to position his SUV perfectly to swoop past his fellow Swede and ultimately led the team to win the Desert X Prix.

You can relive the entire Semi-Final & Crazy Race on Extreme E’s YouTube channel.

Lewis Hamilton’s team, unfortunately, suffered a power steering issue in the first corner which led them out of contention for the battle of second place. They finished with a points tally of 30 points (12+18). And despite finishing second in the race, Andretti United’s tyre puncture in qualifying meant they finished with a total point tally of 28 points (9+19). Taking first place in the championship is Nico Rosberg’s team who finished the race weekend with 35 points (10+25). 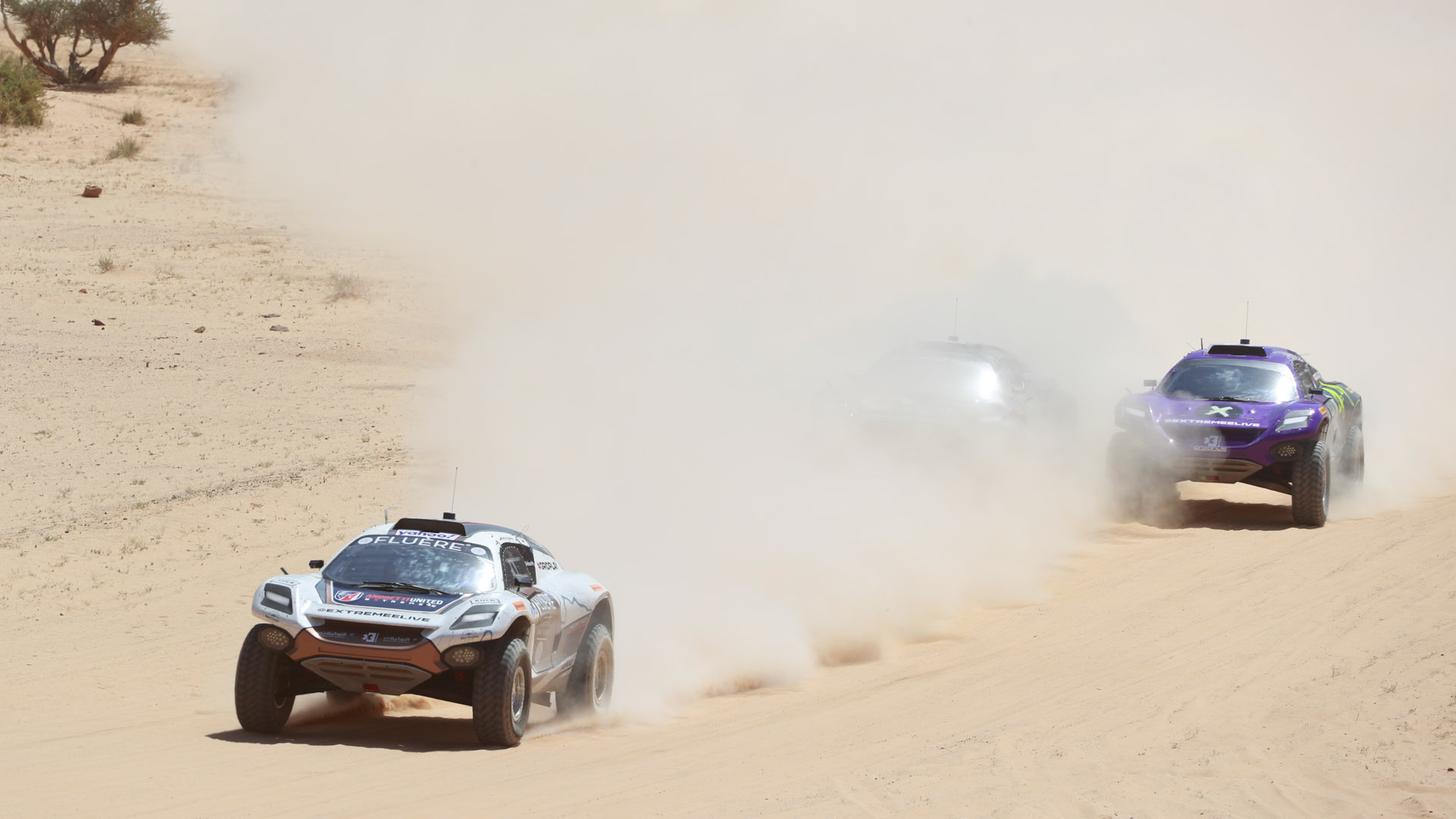 After an exhilarating first race in AlUla, Saudi Arabia, it left the final standings looking like this:

We cannot wait to see how things unfold in Lac Rose, Dakar in Senegal on 29-30 May, where the teams will take on the Ocean X Prix – will Nico Rosberg’s team manage to keep a hold onto their lead?