The Tesla Model 3 is an all-electric car that offers a unique driving experience – from its innovative use of technology to its unrivalled battery efficiency, it’s arguably one of the best EVs on the market.

At the time of writing, it’s available in three trims: the Model 3 – formerly known as the Standard Range Plus (SR+), Long Range (LR) and Performance (P). In this comparative review, we’ll hone into the rear-wheel drive (RWD) Model 3 and the all-wheel drive (AWD) LR – both of which have been tested by TotallyEV; the pictured Pearl White Tesla is the entry-level model, while the Midnight Silver is the Long Range variant.

Undoubtedly, one of the most important factors is the asking price. In the UK, the entry-level Model 3 starts from £42,990 (up from £40,900), Long Range from £49,990 (up from £48,490), and the Performance from £59,990. None of the Model 3 trims are available for the UK government’s plug-in car grant (PiCG), as they all exceed the qualifying threshold. However, if you’re buying a new EV you can still benefit from the Office for Low Emission Vehicles (OLEV) grant, which allows you to claim up to £350 for a home charging point; those living in Scotland can claim an additional £250 via Energy Savings Trust Scotland. 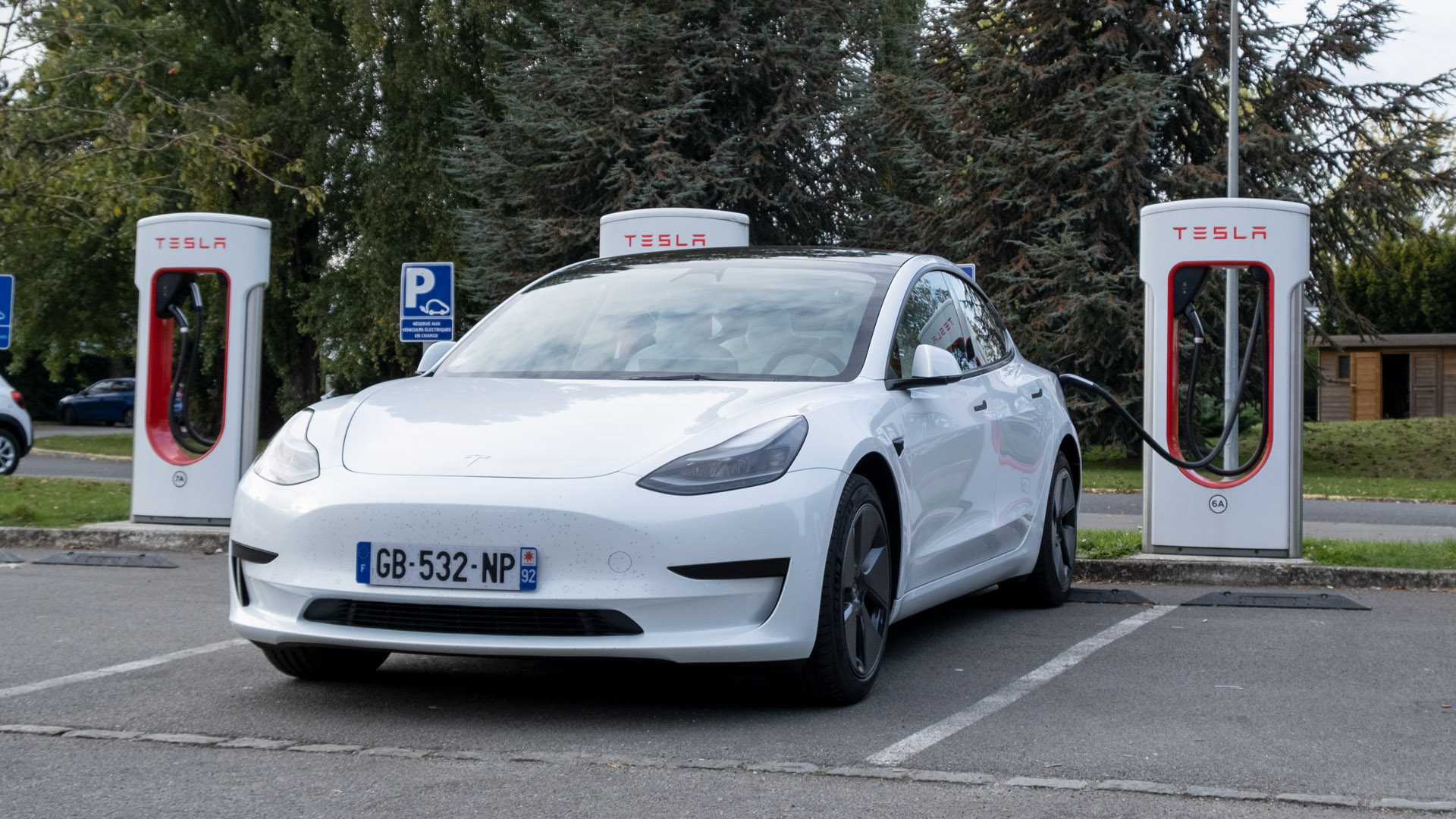 When it comes to price, the regular Model 3 offers the cheapest Tesla experience. However, for an additional £6,500, you can get the Long Range model that adds a few notable features, which we’ll dive into below.

From the exterior, the rear-wheel drive and Long Range models look identical, the only way to differentiate between them is by looking for the ‘Dual Motor’ badge at the rear of the vehicle. The Performance, on the other hand, is a little easier to distinguish as it has lowered suspension, the 20’’ Überturbine wheels and a carbon fibre spoiler.

Speaking of which, the 18’’ Aero Wheels come as standard on the entry-level and Long Range trims, and the 19’’ Sport Wheels cost an additional £1,500.

Elsewhere, the Pearl White Multi-Coat finish comes as standard, while the Solid Black, Midnight Silver Metallic and Deep Blue Metallic cost an additional £1,100, and the Red Multi-Coat costs £2,100 instead.

If you’re shopping around and looking at older-generation Model 3s you’ll notice the 2021 variant has had a chrome delete and has had a makeover namely at the front of the vehicle. Indeed, there are a few aesthetic differences from the exterior of the vehicle, but they’re not radical.

Upon first glance, you’d think there are no differences between the two interior packages. Indeed, all trim levels have the same minimalist design with a 15.4″ display planted at the centre of the dashboard, a panoramic tinted glass roof, a vegan interior and the same amount of storage space within the cabin. Note, the interior colour comes in black but should you want it in a white finish instead, it’ll cost an additional £1,100.

However, dig a little deeper and you’ll find there are a few features that the ‘Premium Interior’ adds over the entry-level model; the biggest being the audio system. As standard, the Model 3 comes with eight speakers, while the upgraded variant has two amplifiers, enables an additional six drivers to be used and adds a subwoofer in the boot – taking the tally up to 15 speakers.

The additional speakers within the cabin and the subwoofer really bolster the overall audio performance. While the rear-wheel drive Model 3 is no slouch, namely in comparison to rival EVs, it’s not quite as impressive as the sound system found within the rear-wheel drive models. Indeed, if you’re an audio enthusiast, you’ll want to get one of the more expensive trims as they offer superior sonic performance. We’d say that the upgraded audio system alone is worth around £1,000-2,000; this figure is based on what rival manufacturers offer as an upgrade.

On the subject of entertainment, the ‘partial premium’ interior has a 30-day trial of ‘Premium Connectivity’, which includes Live traffic visualisation, satellite-view Maps, video streaming (Netflix, Youtube, Twitch), Caraoke, Music streaming (such as Spotify) and an Internet Browser, while this comes included for an entire year in the more expensive trims.

Onto comfort, the entry-level model excludes frunk and interior floor mats, ambient interior lighting and heated rear seats; the latter, however, can be purchased as an option for £300 through the Tesla app – the hardware is there but it’s electronically disabled by the automaker in the entry-level trim.

The entry-level Model 3 has a single rear-mounted motor that dispatches 239 kW (320 hp) of power and 420 Nm of torque. Tesla claims it can get to 60mph from a standstill in 5.3 seconds and can attain a top speed of 140mph.

By comparison, the Long Range variant has an additional front-mounted motor that combined with the rear one dispatches 324 kW (434 hp) of power, 493 Nm of torque, gets to 60mph in 4.2s and attains a top speed of 145mph. The LR also has a £1,500 ‘Acceleration Boost’ option available, which shaves 0.5 seconds off the official time, bringing it down to 3.7 seconds.

When compared, the additional power on tap is certainly felt when you put your foot down on the accelerator pedal. Indeed, we had the non-boosted Long Range variant tested from 0-60mph in 4.41 seconds and the entry-level model at 5.19 seconds. Granted, there’s not much difference in the grander scheme of things, but the Long Range still has a quicker pickup when performing overtaking manoeuvres. 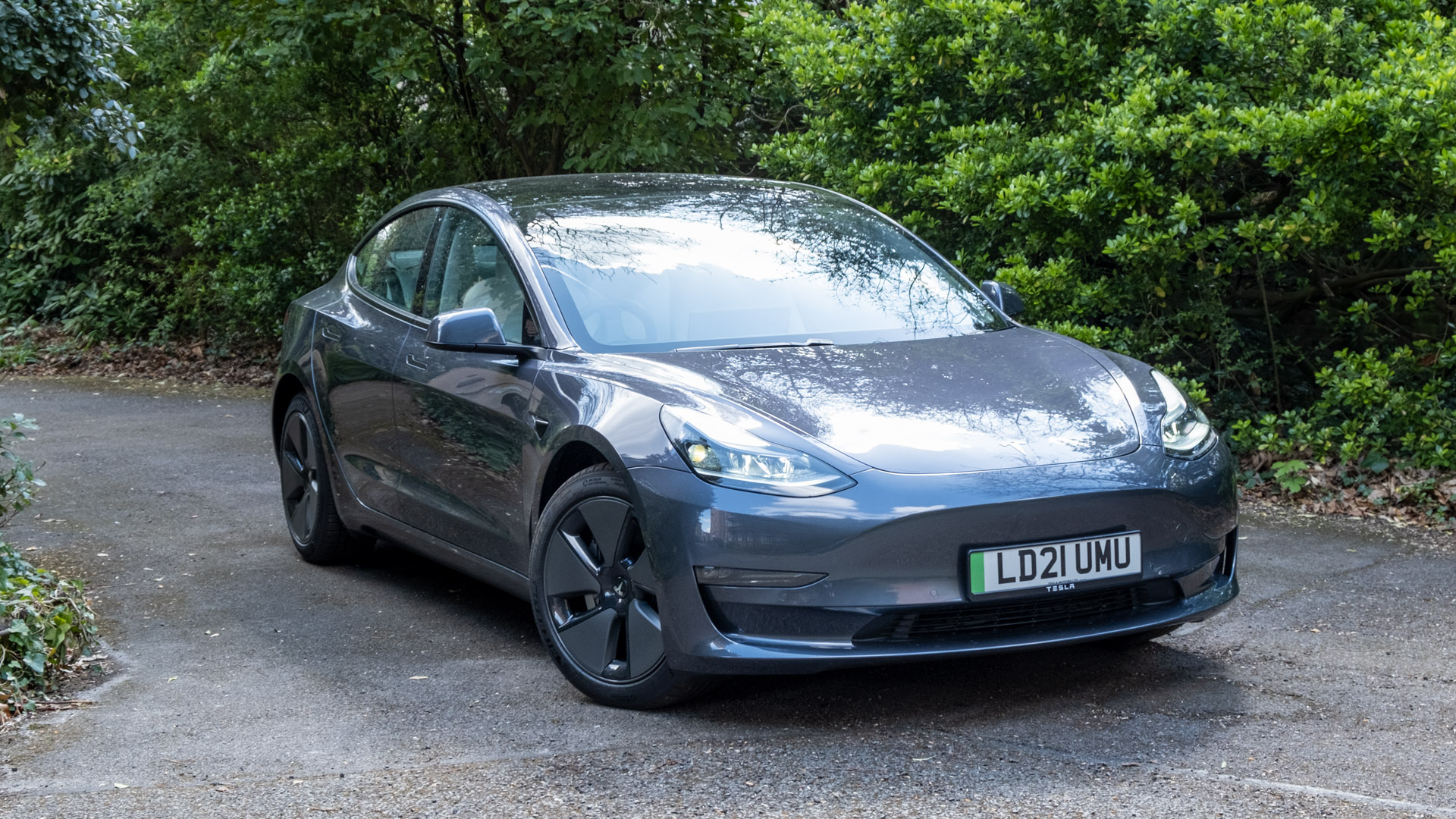 The biggest difference in driving dynamics, however, is the weight distribution. The Long Range model has a near-perfect 50-50% split due to its motor configuration. The rear-wheel drive (RWD) variant has a 47% front and 53% rear split, instead. In our tests, we found the RWD model didn’t quite perform to the same standard as its dual-motor sibling. The entry-level model doesn’t feel as planted to the ground and also suffers from a bit of rebound when traversing flat, uneven surfaces such as motorway routes. To rub salt into the wound, the AWD model has bettered traction and incites more confidence when faced with trickier weather conditions. Essentially, if you want the bettered performance and handling characteristics, you’ll want to consider the Long Range model or even the Performance variants instead of the entry-level Model 3.

Now a key factor for those who want to go the distance is the all-electric driving range. Unsurprisingly, the ‘Long Range’ model lives up to the billing, where from its 82 kWh battery pack we achieved a staggering 310 miles in our mixed driving tests. By comparison, the entry-level model that houses a 54 kWh battery pack achieved 230-250 miles instead. While the RWD model will suffice for a lot of individuals and also betters most of its rivals the Long Range still reigns supreme in its class.

As for recharging, the RWD is currently ‘limited’ to a 170 kW input, while the Long Range and Performance models go up to 250 kW. One would assume the more expensive trim levels charge faster, but a 0-100% charge is near identical given the capacity differences between the battery packs. Elsewhere, all trim levels benefit from the Tesla Supercharger network, and while the RWD model can’t quite benefit from the increased speeds of the V3 Superchargers (capped at 250 kW), the vehicle can still accept a slightly faster charge as opposed to it being connected to a V2 Supercharger that caps out at 150 kW.

Which Tesla Model 3 trim is best?

Ultimately, if you don’t need the top echelons of performance nor range and you’re not fussed about the in-car audio system, then the entry-level Model 3 is the best Tesla for you – it provides a near-identical experience to its dual-motor counterparts and more importantly is cheaper.

However, if you’re looking for one of the best EVs on the market you should consider splashing out the extra £7,000 on the Long Range model. It’s the model we would save up for, but appreciate its added features aren’t necessary for some consumers.

Of course, we can’t forget about the Performance trim, however, we suspect this model will only appeal to those who really want a Tesla on steroids. To us, its lowered range doesn’t make it as appealing as its dual-motor sibling, and the £17,000 premium over the RWD model is hard to justify.