Announced in 2010, the Volkswagen e-up! was aimed at filling a gap in the market by posing to be an entry-level all-electric vehicle. Subsequently launching in 2013, the small-sized car housed an 18.7 kWh battery pack, which only managed an ambitious 83-mile range on a single charge.

Fast-forward to September 2019, the German manufacturer unveiled its second-generation e-up! at the International Motor Show (IAA). The 2019-20 car that’s on review has a larger battery pack, giving it a much-needed boost in range over its predecessor – up to 159 miles on a single charge.

The question is: how does the VW e-up! stack up against its fiercest rivals that have also revamped their vehicles?

If you’d prefer to watch a review of the Volkswagen e-up!, visit our YouTube channel.

Unlike a lot of other vehicles on the market that have a plethora of options to choose from, the VW e-up! is refreshingly simplistic. 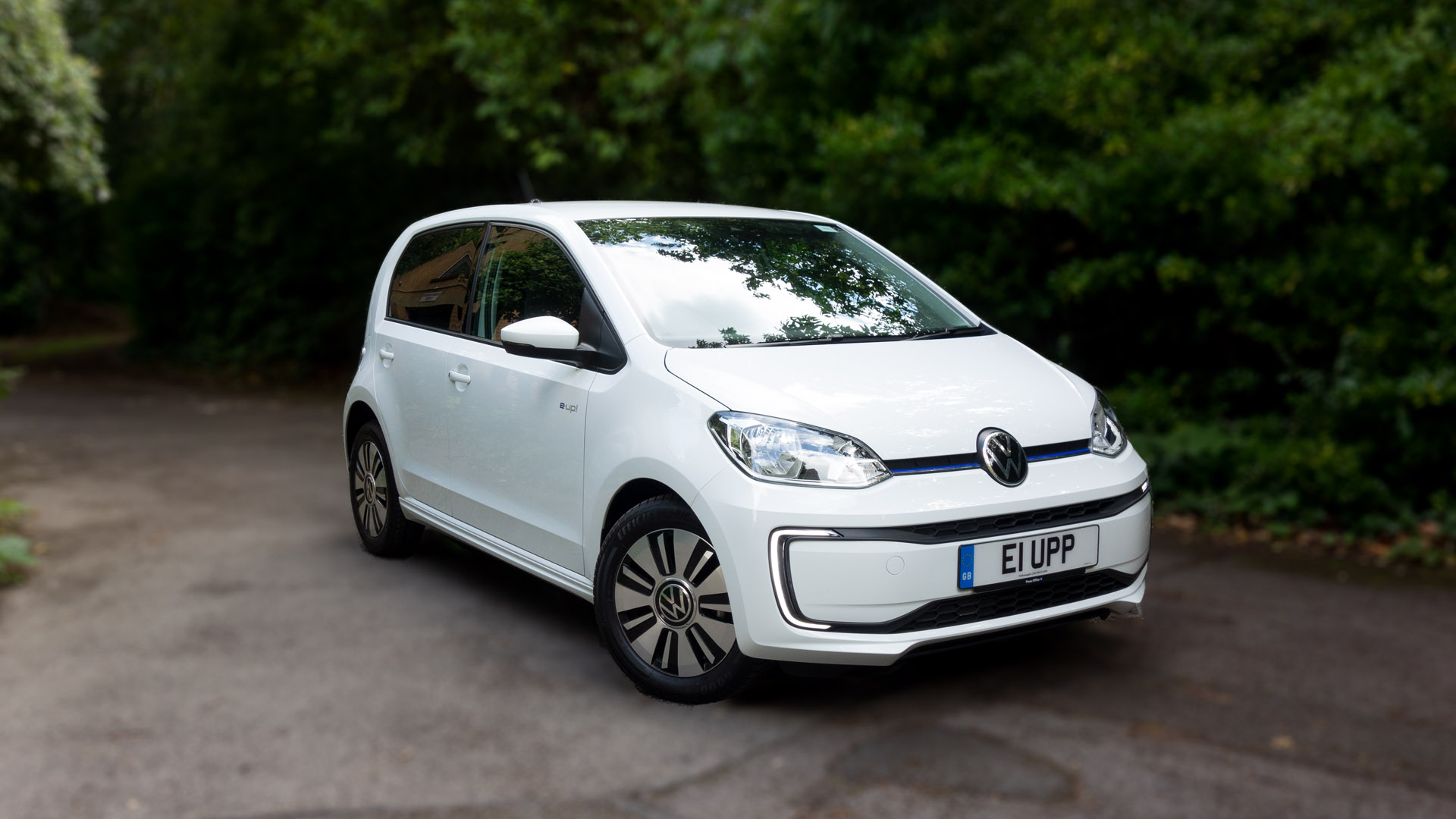 It’s available in five colours, only. The non-metallic Pure White (£350), Tornado Red (£350) and Teal Blue, where the latter colour comes as standard; the Metallic and Pearl Effect finishes, Costa Azule/Honey Yellow and Tungsten Silver/Deep Black, will set you back £575.

Elsewhere, a ’Sharkskin’ dashpad pack can be added for £370. It adds ambient interior lighting, unique door sill protectors and chrome-trimmed interior door handles. An optional £70 variable boot floor and luggage net can be added, too.

When it comes to taxation, the e-up! is around 10% better-off than the non-electric up! in Benefit-in-Kind; thanks to zero tailpipe emissions, it also saves you £175 in Vehicle Excise Duty (VED). 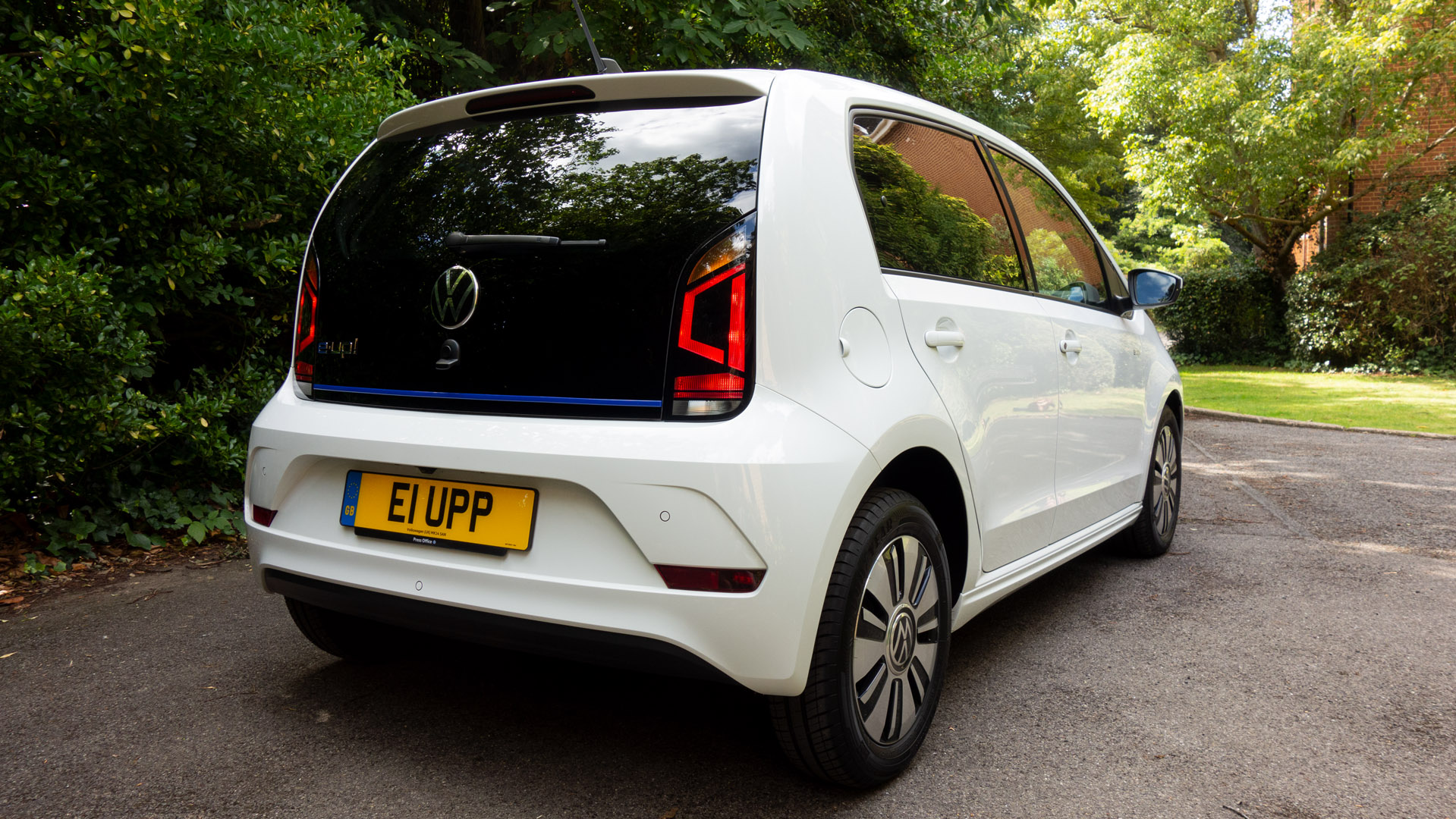 Despite its low price tag, namely when compared to the Renault, Mini and Honda equivalent, the Volkswagen e-up! has a sense of style and cuteness to it.

From the front, the car is both sporty and elegant, which is thanks to its accentuated front bumper and ‘C’ shaped daytime LED running lights. At the side, the e-up!’s 15″ alloy wheels give the car a younger look; where at the back, its black-coloured boot lid with blue accent finish adds some much-needed pizzazz.

Its design complements the car’s size, which is 3.6m long, 1.91m wide (including mirrors) and 1.507m tall. Our only complaint about VW’s design comes when you switch on the headlights – the yellowish headlights don’t match the blueish daytime LED lights that sit below them. Had these matched, we’d have had a perfectly executed exterior design for a car of its stature.

Unfortunately, the same praise couldn’t be associated with the e-up!’s interior design. Here, the seats are lined with a basic ‘Fusion’ cloth upholstery, and the bear-all-plastic dashboard with a ‘Black Cube’ finish.

Looking around the interior cabin, there’s a sense of cheapness that creeps in and shows where the automaker has attempted to keep the car’s manufacturing costs down to a minimum. 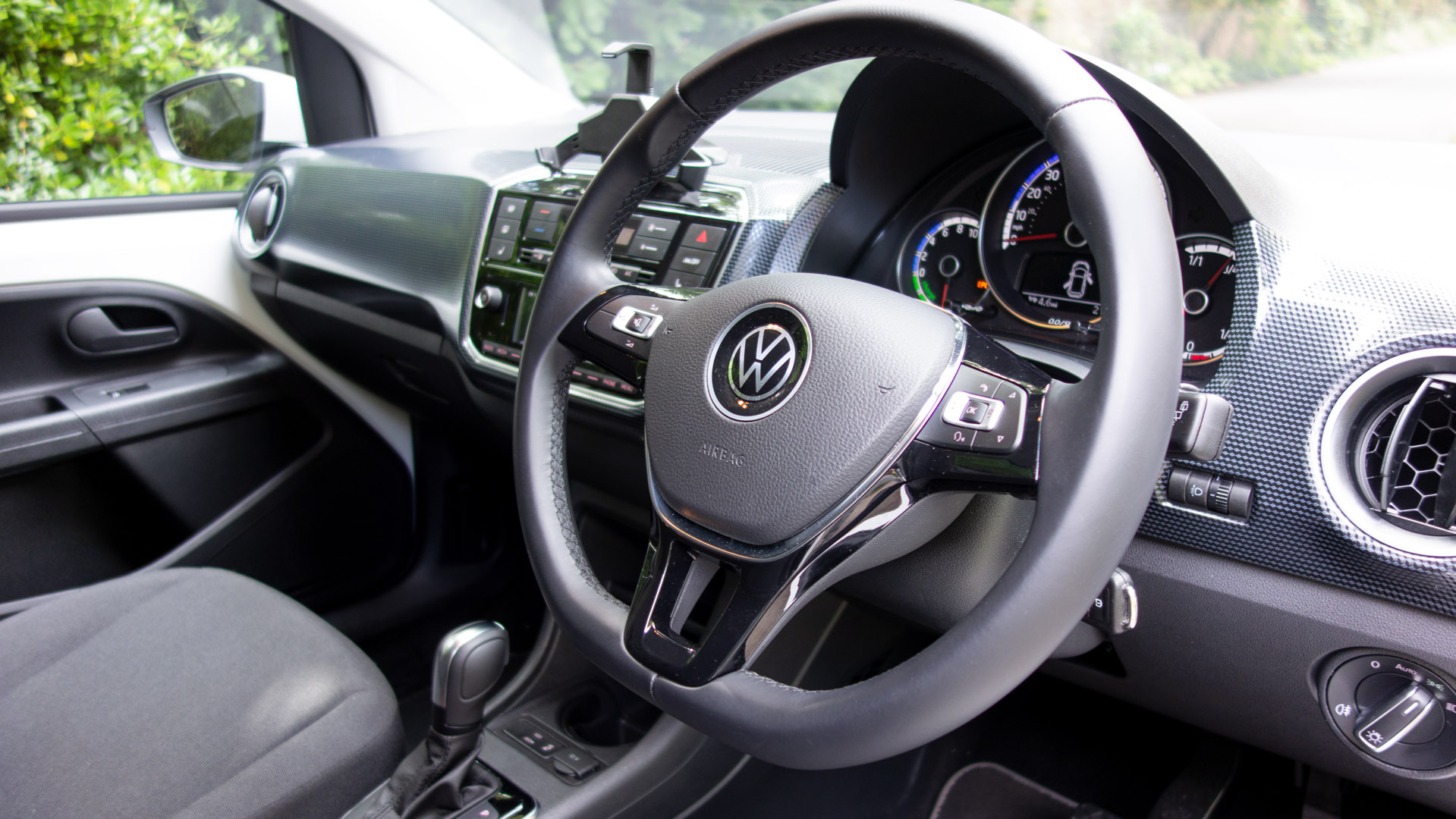 It’s even more evident when you look at the car’s inner door frames, which have a mixture of plastic and an inherent lack of fabric, which leads to the exterior metal finish staying on show – pick the ‘Tornado Red’ colour option for the exterior of the vehicle, for example, and the non-metallic paint will also reside within the cabin.

Elsewhere, the infotainment system is a non-touch based 5″ colour display that resides at the centre of the dashboard. Android Auto and Apple CarPlay, aren’t supported. Some consumers might feel an advanced system would have spruced up the car’s technology. Alas, you’ll have to reside to physical buttons and knobs, instead.

To us, however, the sense of simplicity works well. Volkswagen hasn’t complicated the vehicle’s ease-of-use. It’s all very functional and works well for the car’s target audience.

The e-up!’s six-speaker audio system, for example, can be summoned over Bluetooth (limited to the SBC codec, only). While the lack of a comprehensive infotainment system has led the German automaker to include a three-pronged smartphone holder that sits at the centre of the dashboard. The bundled accessory sits on top of a USB socket, which can provide your device with some power; it’s effectively aimed at replacing the associated infotainment display with the one on your smartphone. Volkswagen even has a ‘Maps + More’ app, which is specifically designed for the up! range to replicate a modern infotainment system on a smartphone.

Under the phone holder, there are physical climate control buttons and a small LCD display that showcase the target temperature and fan speed.

As for the steering wheel, it’s appropriately laid out with media controls on the left and instrument cluster adjustments on the right. The cluster is presented in the form of three physical dials: one for power usage, another that serves as a battery-level indicator and finally, a larger third dial that’s used as a traditional speedometer. The latter has a small LCD display that can be customised to a certain degree. 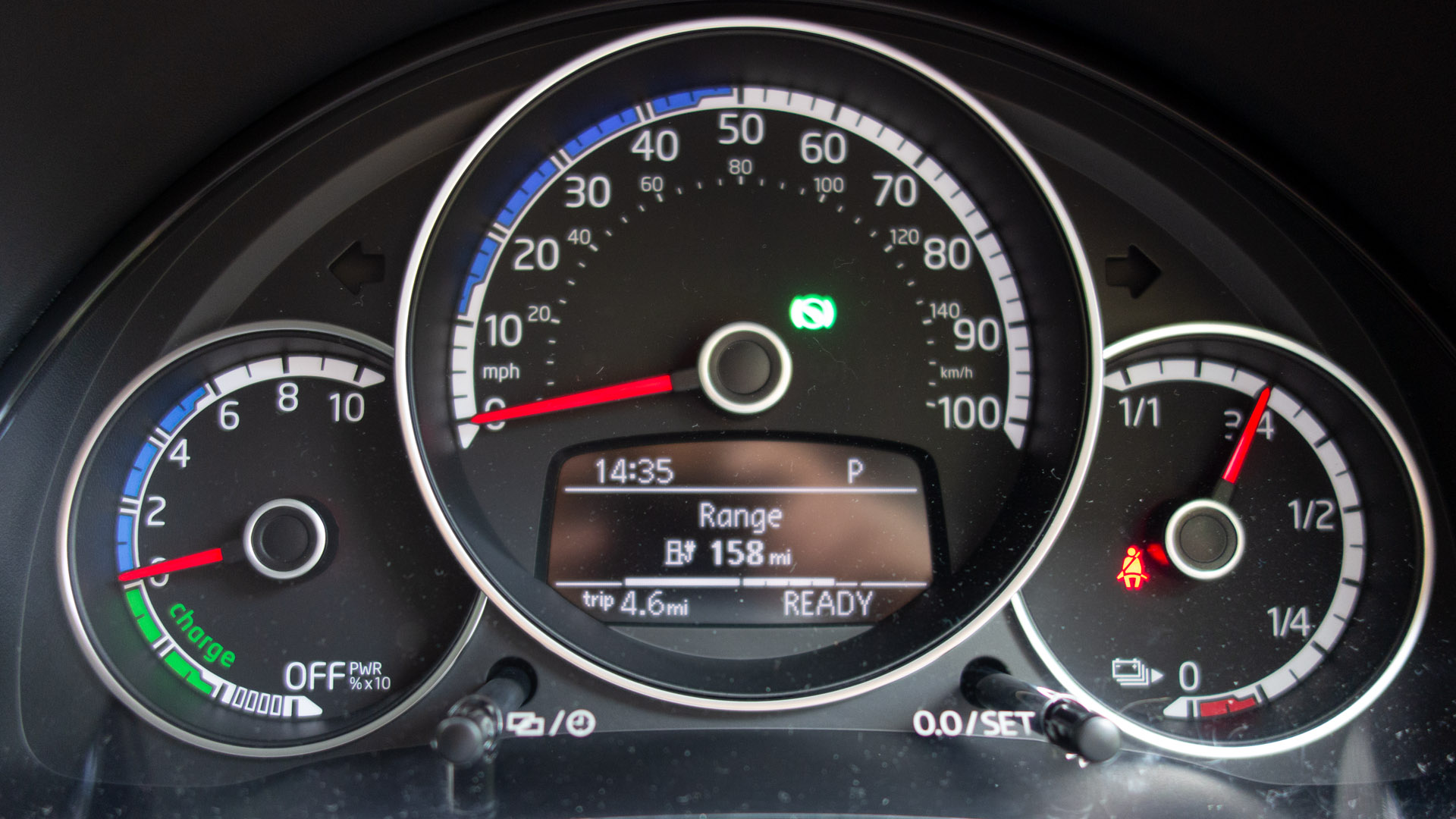 Move to the centre console and Volkswagen has even kept a physical handbrake, which is seemingly a rare occurrence nowadays in EVs. Here, you’ll also find a cup holder space, and further along, toward the gear selector a 12V socket and a small compartment to store your valuables and another 1-litre water bottle.

If you’d like to know how the stock 6-speaker system performs, watch our dedicated review of it on YouTube.

Due to its small size, the Volkswagen e-up! is limited to the amount of available storage space it has to offer; there’s just enough space to squeeze in a 500ml bottle in the front door compartments, while at the back, passengers will only have a small tray that resides within the doors, to place a small-sized smartphone.

In the boot, there’s 251 litres of usable storage space, which is enough to fit two hand luggage and a few garments. Prop the seats down to reveal 951 litres of space, and one can fit larger-sized luggage or, at a stretch, even a road bike.

At the rear, the seats are a little stiff and with the car limited to four seatbelts only, you can’t squeeze in a fifth adult or child in the middle seat. Instead, this space is reserved for additional storage space between the two rear passengers.

In terms of headroom and legroom, the rear of the cabin is compact; 6-foot (182cm) individuals will fit, but add a couple of inches and it’ll be severely uncomfortable to be seated at the back. It’s also not where you’ll want to be seated if it’s a long drive.

Thankfully, the front seats are a lot more comfortable and are manually adjustable, which with the added headroom means taller-sized individuals can drive or sit at the front.

It’s also worth knowing that at the rear, the windows are manually propped open, while at the front they’re electronically adjustable.

The car’s compact size does take its toll on usable storage space and comfort, but does make up its deficit in terms of drivability. The e-up! is a marvel on the road; it’s fun to drive, nippy and well-balanced when driven at speed on country roads. It’ll only get up to 81mph, however, but that’s more than enough for a city car.

When it comes to acceleration, the VW gets to 62mph in 11.9s. That’s not incredibly quick for an all-electric car, but given its small motor only outputs 60 kW (81hp) of power, it’s hardly surprising. Maximum torque is rated at 210 Nm.

Raw performance aside, the car also makes light work of tight corners. Due to the e-up!’s small wheelbase, it’s supremely easy to manoeuvre. It’s aided by the fact that the steering wheel has a good size and feel to it, too; it’s not stiff nor feels disconnected with the front axles.

Similarly, when it comes to parking the large windows and glass boot make for great 360-degree visibility of the vehicle’s exterior. Pop the car in Reverse and the rear-view parking camera shows up on the small 5″ display on the dashboard. Here, you’ll also find the parking sensors come into play; making a tone when you get too close to an object. 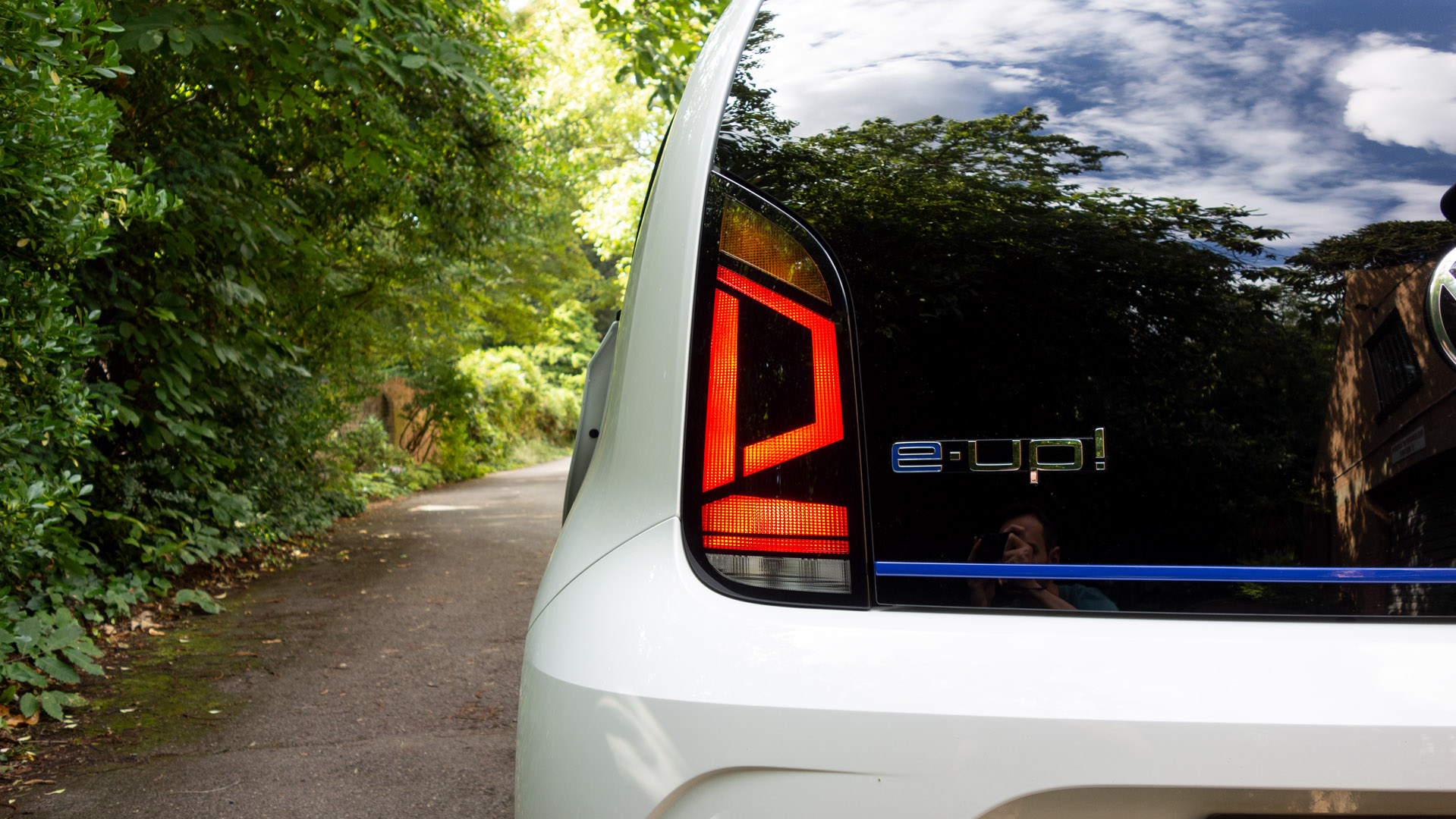 To shift between drive modes, you’ll need to use the gear selector positioned in the centre console. The familiar-looking knob, can be put in Park, Reverse, Neutral, Drive and B-Mode. The latter mode is to enable level 4 regenerative braking, whereby a one-pedal approach can be utilised within inner-city routes. If you find the pull back a bit too aggressive, level 1-3 can be accessed by shifting left (+) or right (-) when you’ve got the car in Drive.

The biggest bugbear is the car’s inability to store its last-selected drive mode. As such, each time you turn the key in the ignition, you’ll need to manually shift to a regenerative braking method, if you choose to use it, that is. 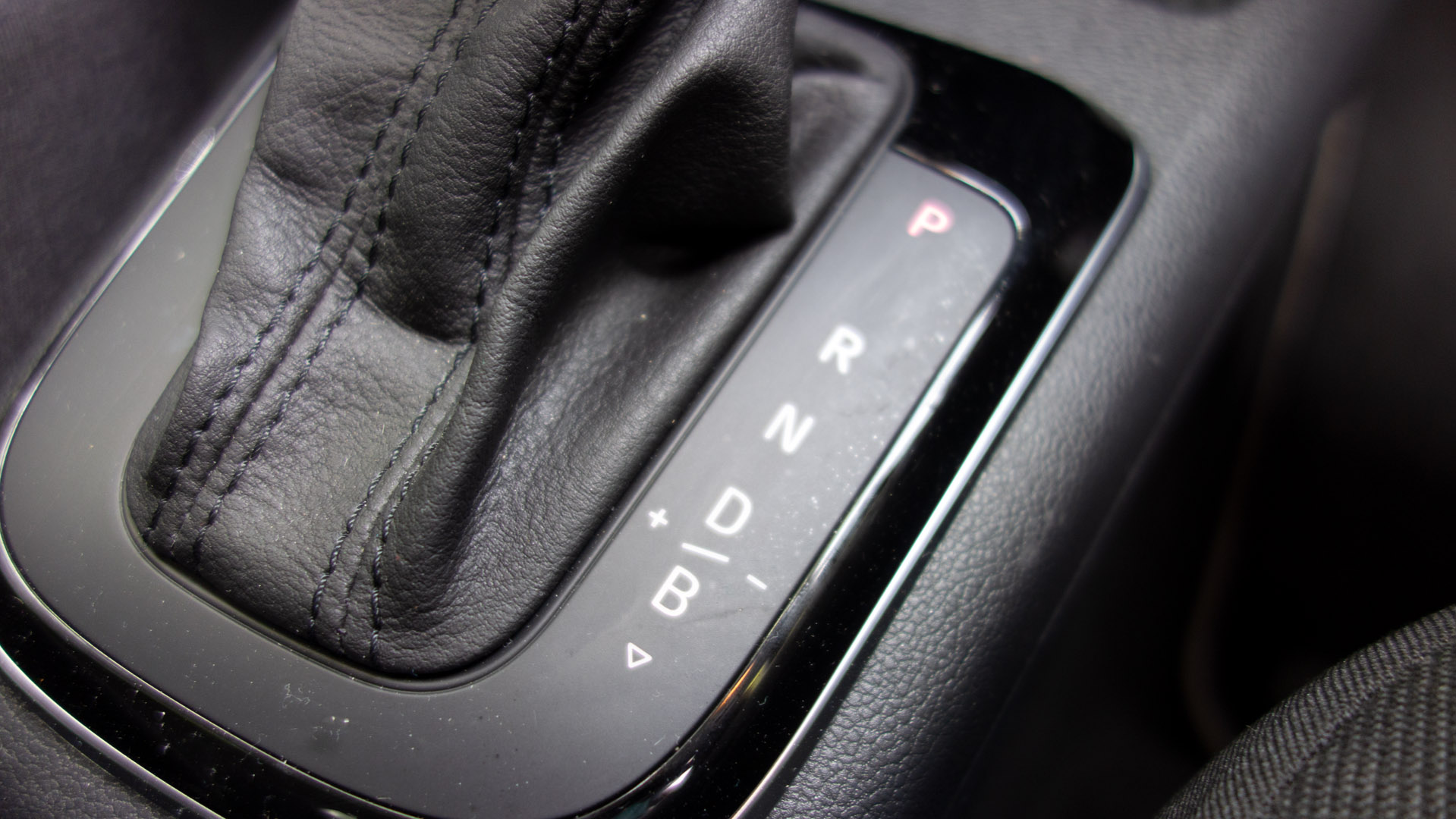 Likewise, with Eco and Eco+ modes – the two drive modes that can be accessed by pressing the appropriately labelled buttons that reside by the gear selector – need to be pressed each time you enter the vehicle.

When it comes to range, Volkwagen claims a 159-mile range. In our tests, however, this figure hovered around 120-140 miles in mixed driving conditions. Drive solely on the motorway, where electric vehicles don’t recoup any energy, and you’ll find the figure easily dips below 110 miles when averaging 70mph. 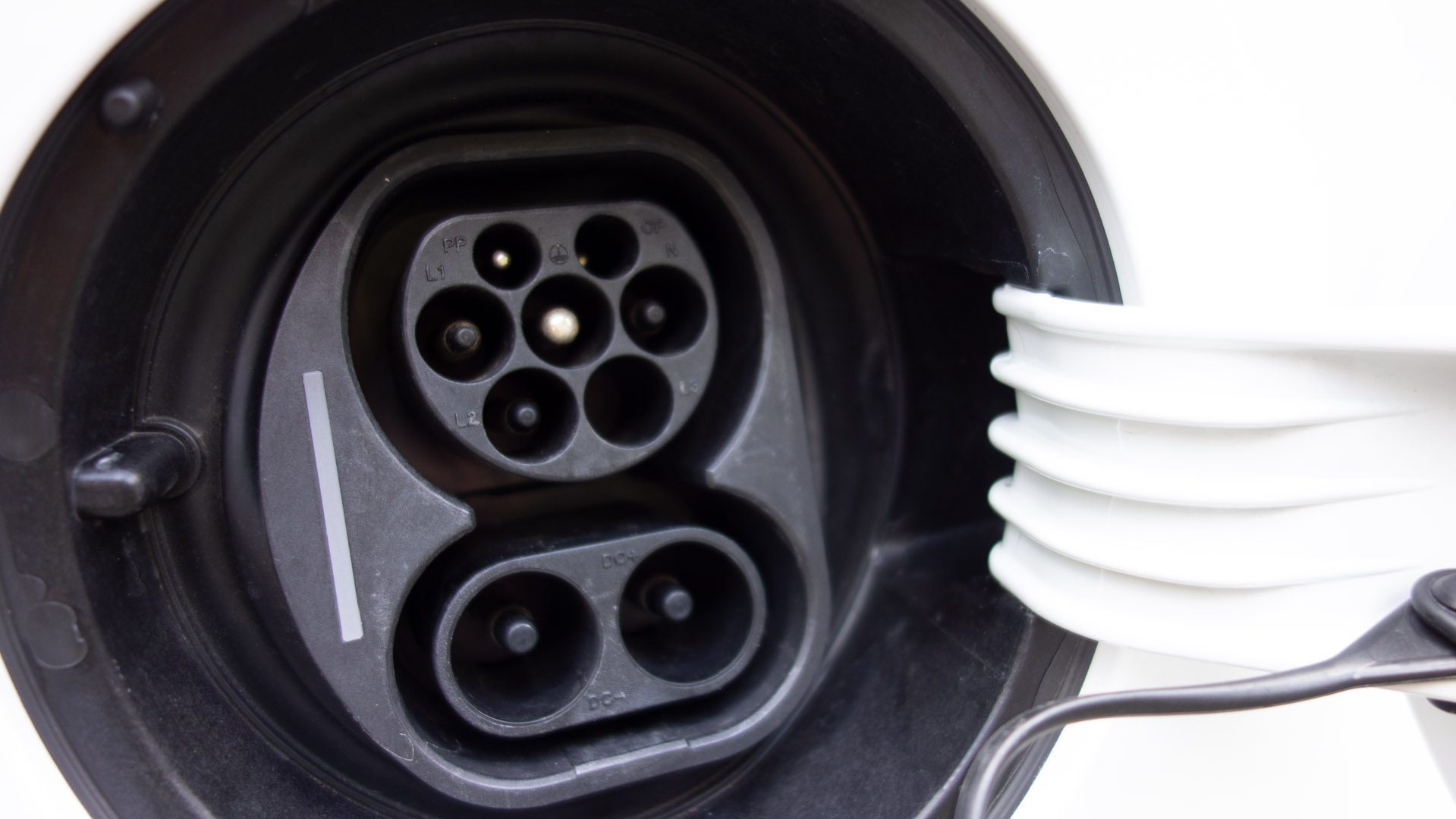 Driving on the motorway is aided by the addition of Cruise Control and Lane Assist, which make it easier for longer commutes. However, we wouldn’t expect those who frequently drive on the motorway to purchase the e-up!, as it’s ultimately a city car. Still, it’s a vast improvement over its first-generation model, which could only achieve, at most, 83 miles on a single charge; realistically it sat closer to 60 miles, instead.

To recharge the 32.3 kWh battery pack, you can make use of the 40 kW Combined Charging System (CCS) connector to charge an empty battery to 80% in just 60 minutes. Using a slower 7.2 kW Type 2 cable will equate to the same level of charge in about four hours.

Elsewhere, road noise is present from the car’s 165/65 R15 alloy wheels and wind noise can be heard deflecting off the vehicle’s A-pillars. It is noticeable when the car is driven on motorways, but is a non-issue when it’s faced with inner-city routes. 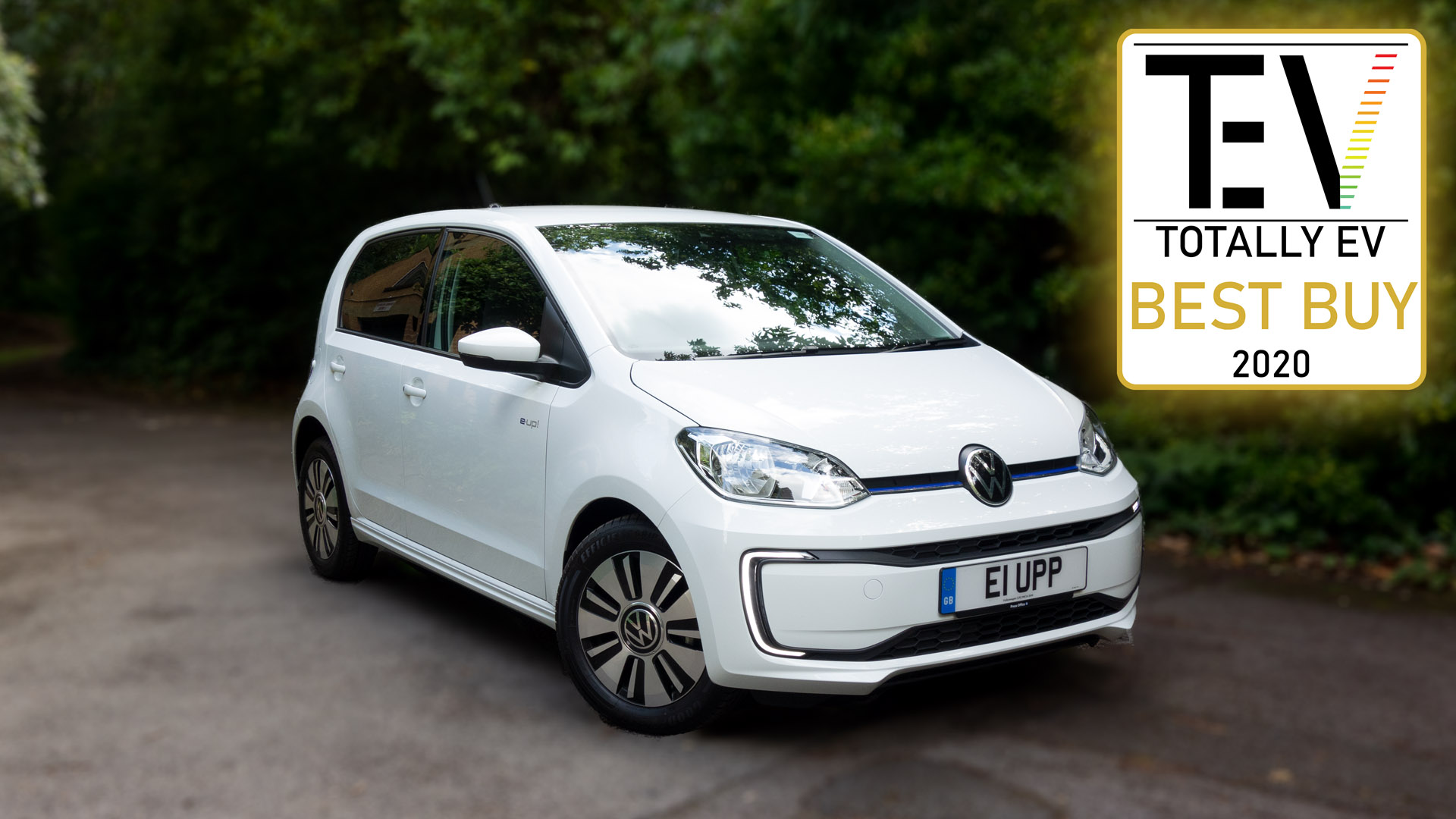 TotallyEV’s verdict on the Volkswagen e-up!

On the whole, the Volkswagen e-up! combines style and an exciting drive into one comprehensive package. It might not have the longest range for a car of its class, nor ample amounts of space, but at £20,555, you’ll be hard-pressed to find a better compact all-electric car. As a result, the e-up! receives TotallyEV’s coveted Best Buy award.