The Tesla Model Y is in many ways identical to the Model 3. We were left impressed by the automaker’s ability to combine range and performance into a competitively priced SUV, where we awarded it our Best Buy award.

When it comes to audio, the Model Y shares the same 14-speaker premium audio system as the Model 3 Long Range and Performance. Indeed, unlike the Model 3, both the entry-level RWD and AWD Model Y models share the same upgraded audio system.

To tinker with the vehicle’s audio settings, you’ll have to navigate to the ‘Audio Settings’ tab on the 15″ infotainment system. Here, you’ll find a five-band equaliser, where we took off 2 dB to the Bass and 0.5 dB off the top-end Treble EQ. We set the Immersive Sound to ‘Standard’, as we felt this yielded a good blend of accuracy and a widened soundstage.

To connect up to the vehicle’s audio system using your smartphone, you’ll be limited to using Bluetooth only – the USB Type-C ports are for charging only. Tesla’s infotainment system doesn’t support Android Auto or Apple CarPlay, and as such this is the only way to playback media files from a phone. Here, the system supports the AAC and SBC codecs; it’s a shame that the aptX and LDAC codecs aren’t included.

On the plus side, there is the option to plug in a USB drive – which must be formatted to FAT32 – where you’ll be able to playback MP3 and higher-resolution files, such as FLAC (Free Lossless Audio Codec File) and WAV formats – up to 24-bit 192 kHz is supported. This makes the Model Y among a finite number of vehicles that support higher resolution playback – ideal for budding audiophiles. Elsewhere, the Model Y has a 30-day trial of Spotify, Tidal and video streaming platforms, Netflix, YouTube and Twitch.

As for media controls, there are the onscreen touch controls and can be accessed via one of the scroll wheels on the steering wheel. When the latter is physically pressed it pauses or resumes playback, and when shifted to the left or right will go back or skip a track, respectively. If you roll the wheel upwards or downwards it’ll adjust the media volume.

For a demo of the Model Y’s audio system head on over to our YouTube channel.

When it comes to its audio configuration, the Model Y has 9 speakers located at the front of the cabin, four at the rear and a subwoofer in the boot. There are also two amplifiers that help drive power to all the audio drivers.

We reached out to Tesla to get further details of the vehicle’s audio configuration, but the automaker couldn’t divulge this information. It’s worth noting that the Model Y and Model 3 both used to have a 15-speaker (or 14+1) setup. Tesla removed the centre 1″ 25W dashboard tweeter from its newer models, bringing the system down to 14 speakers including a subwoofer (13+1).

At the rear of the cabin, there’s a 4″ 33W mid-range driver located on each of the rear doors, and an identical speaker found towards the rear boot lid (note, unlike the Model 3, this is further back, as the Model Y omits a rear parcel shelf). To complete the system, a 160W subwoofer resides in the boot.

If these wattage and driver sizes are correct – as we’ve based this on unofficial information sourced on the Model 3 – it would yield a total peak output of 605 Watts. Despite all that power, the Model Y is a little shy of perfection in its sub-bass extension. While it’s not cut short nor lacks that low-end oomph, it can’t compete with the Harman Kardon subwoofer found within the BMW i4 and Volvo XC40 Recharge nor the large Naim Audio sub in the Bentley Betayga Hybrid.

The mid-bass quantity and quality, however, are faultless; with two decibels taken off the Bass EQ, we find listening to ArrDee & Aitch’s collaboration, titled ‘War’ both exciting and engaging. No matter where you’re sat, the mid-bass frequencies are exquisitely reproduced. 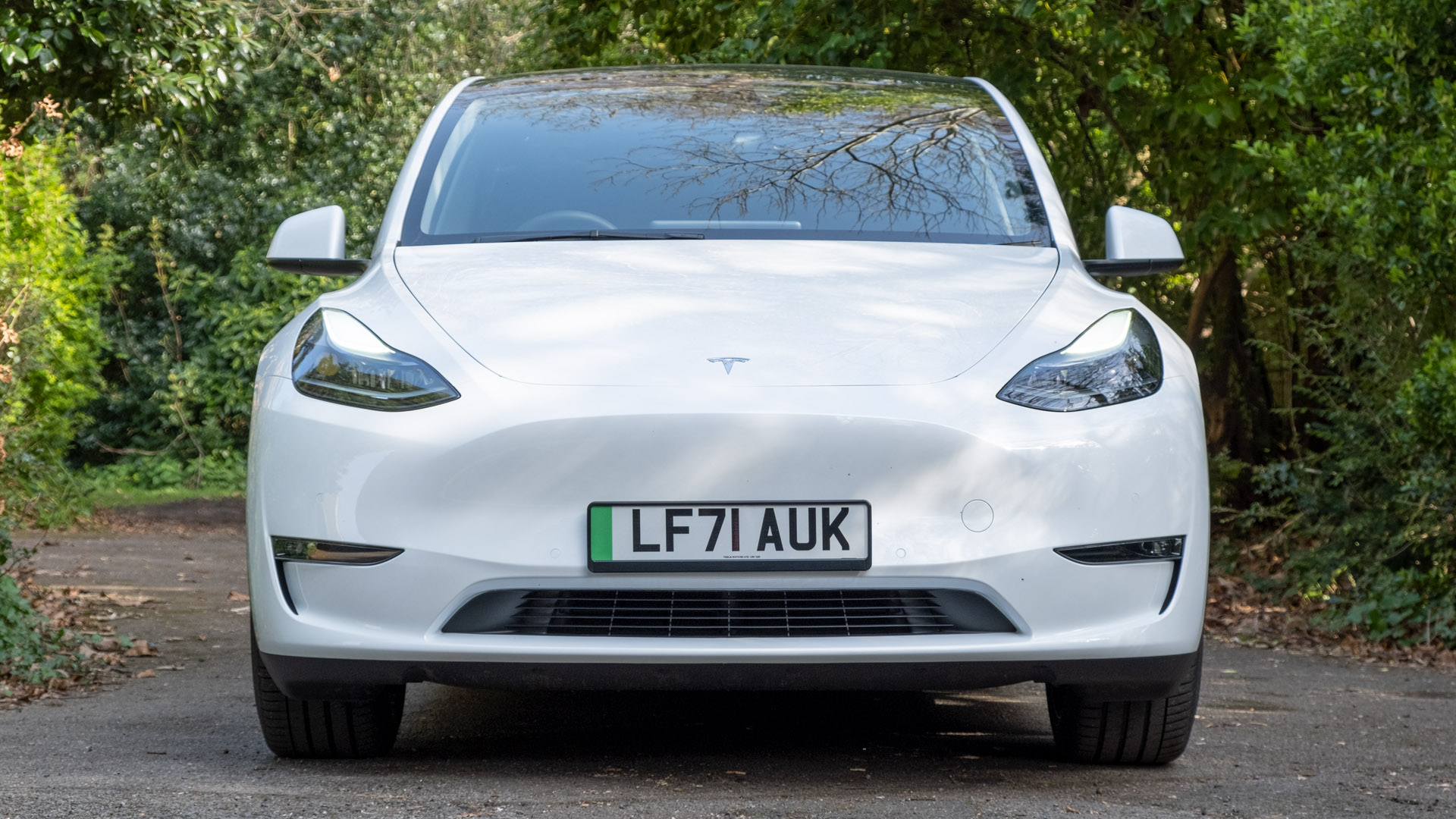 Now one might think that the mids take a massive hit, but that’s anything but the case. The Model Y, much like its sibling the Model 3, delivers phenomenal class-leading mid-range reproduction. Unlike the Volvo XC40 Recharge, Kia EV6, Hyundai Ioniq 5, Jaguar I-Pace, BMW iX3, Audi Q4 e-tron, Mercedes EQA and even the Bentley Betayga Hybrid to name just a few other SUVs, the Model Y stands ahead of all of its competitors. The forward-sounding mids accurately portray male and female vocals, and don’t sound pushed back either. Truly remarkable.

Moving onto the highs, they extend tremendously well, whereby they provide plenty of excitement. We’d suggest reducing the treble EQ by 0.5 dB in order to tail off the harshness that one might hear at louder volumes. Of course, that’s dependent on your hearing sensitivity.

As for its soundstage, it’s very impressive, whereby leaving the ‘Immersive Sound’ on ‘Standard’ provides both a reference sound and one that’s more engaging than with the option fully disabled; dialling it to ‘High’ results in a loss of accuracy in the mid-range tones, as vocals are seemingly pushed back a slither.

In comparison to the Model 3, however, Tesla’s larger vehicle has its rear speakers within the boot itself rather than the rear parcel shelf. This means sound has further to travel before it hits your eardrums. As such, the Model Y is slightly less engaging than its saloon alternative or other SUVs that have more audio drivers at the rear of the cabin. To counteract this, Tesla could release a firmware update to include a dedicated ‘Rear Surround’ setting, a feature that’s found within a few rival systems.

Nonetheless, the Model Y’s overall soundstage reproduction is excellent. Combined with fantastic instrument separation, Santana’s live recording of ‘Africa Bamba’ comes to life within the SUV; it’s a real pleasure to hear the harmony between guitar strums, trumpets, vocals, and the drums among other instruments within the Model Y’s cabin.

Our biggest complaint about the Model Y’s audio system isn’t actually of the speakers themselves nor the positioning but rather the cabin noise. Using a sound meter and with the larger 20″ ‘Induction Wheels’ fitted we recorded, 36 dBA at a standstill; 53-56 dBA, while driving at 20-30mph; 60-63 dBA, while driving at 40mph; and 70-73 dBA when at 70mph. When the windows are brought down, the level increases by roughly 12 dBA. 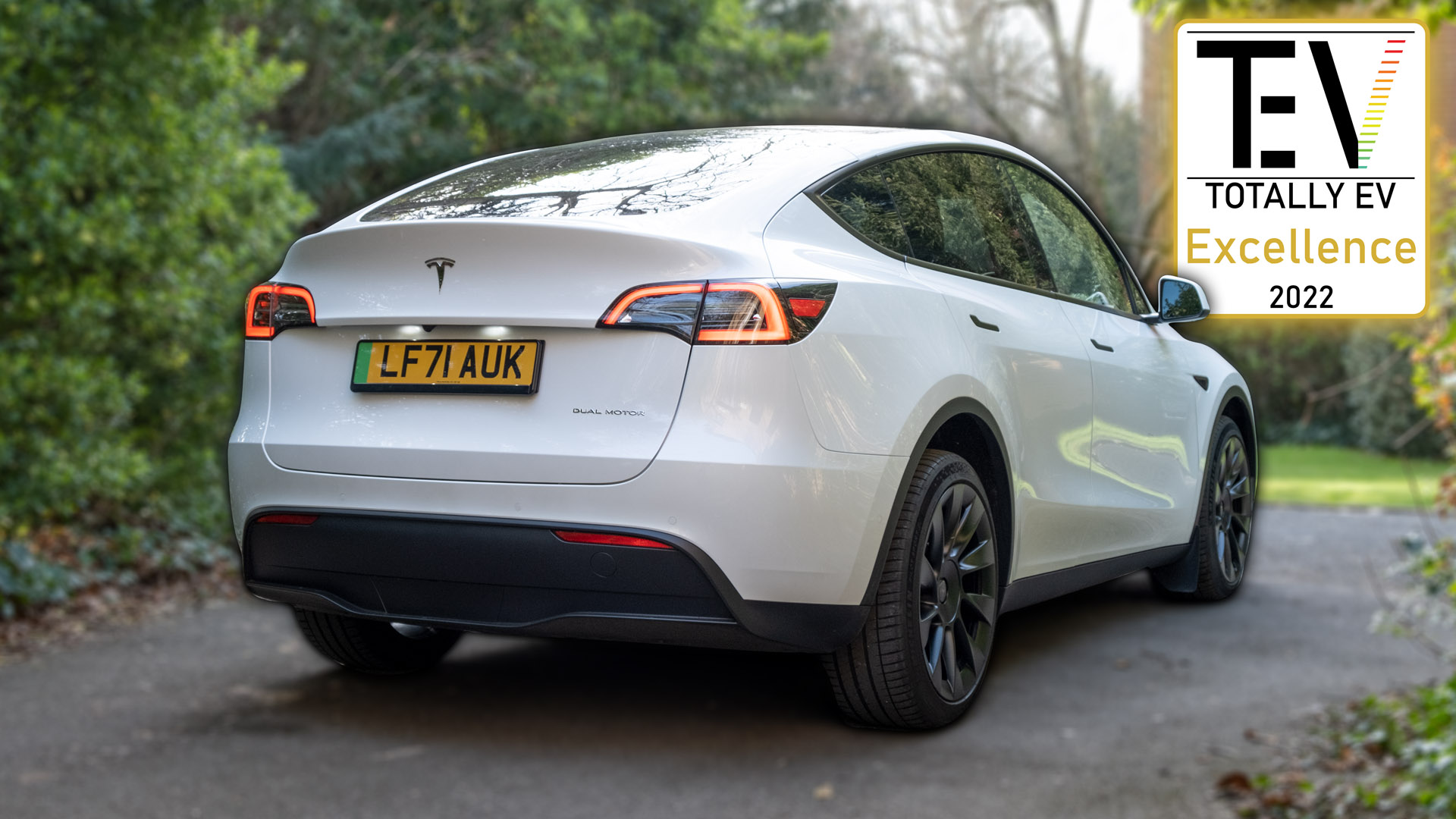 Granted the Model Y’s cabin isn’t as well insulated as the Model 3 nor does it produce that perfect sub-bass extension, it is otherwise a faultless sound system and one that we’d say is class-leading. Frankly, we can’t think of a better-sounding all-electric SUV.

As such, the Model Y gets TotallyEV’s Audio Excellence award, and one of the highest ratings we’ve given to an in-car audio system; matched by the Harman Kardon system within the BMW i4, and beaten only by the Model 3‘s Premium system and the Bentley Betayga Hybrid‘s Naim Audio configuration.

How would you rate the Model Y’s audio system over rival electric SUVs and the Model 3? Let us know in the comments section below or via social media; we’re on: YouTube, Instagram, Facebook, Twitter and LinkedIn.

Volkswagen ID.5 audio review: Should you upgrade to Dynaudio?