The BMW 330e M Sport Touring is a plug-in hybrid estate that shares the same DNA as its saloon-sized sibling. From the vehicle’s sporty design to its hybrid powertrain, the 330e Touring is the German automaker’s more practical alternative.

Much like the 330e saloon, the hybrid estate also serves as a compelling choice for company car owners looking to lower their Benefit-in-Kind (BIK) tax bill. TotallyEV drove the 330e xDrive M Sport, which at the time of writing starts from £46,685.

Much like the saloon-sized 330e, the Touring has a multitude of trims to choose from: SE, Sport, M Sport, M Sport Pro Edition and M Model. Within the M Sport category alone, there are 18 powertrain variations to choose from – four petrol plug-in hybrids (PHEVs), five petrol models and nine diesel variations. 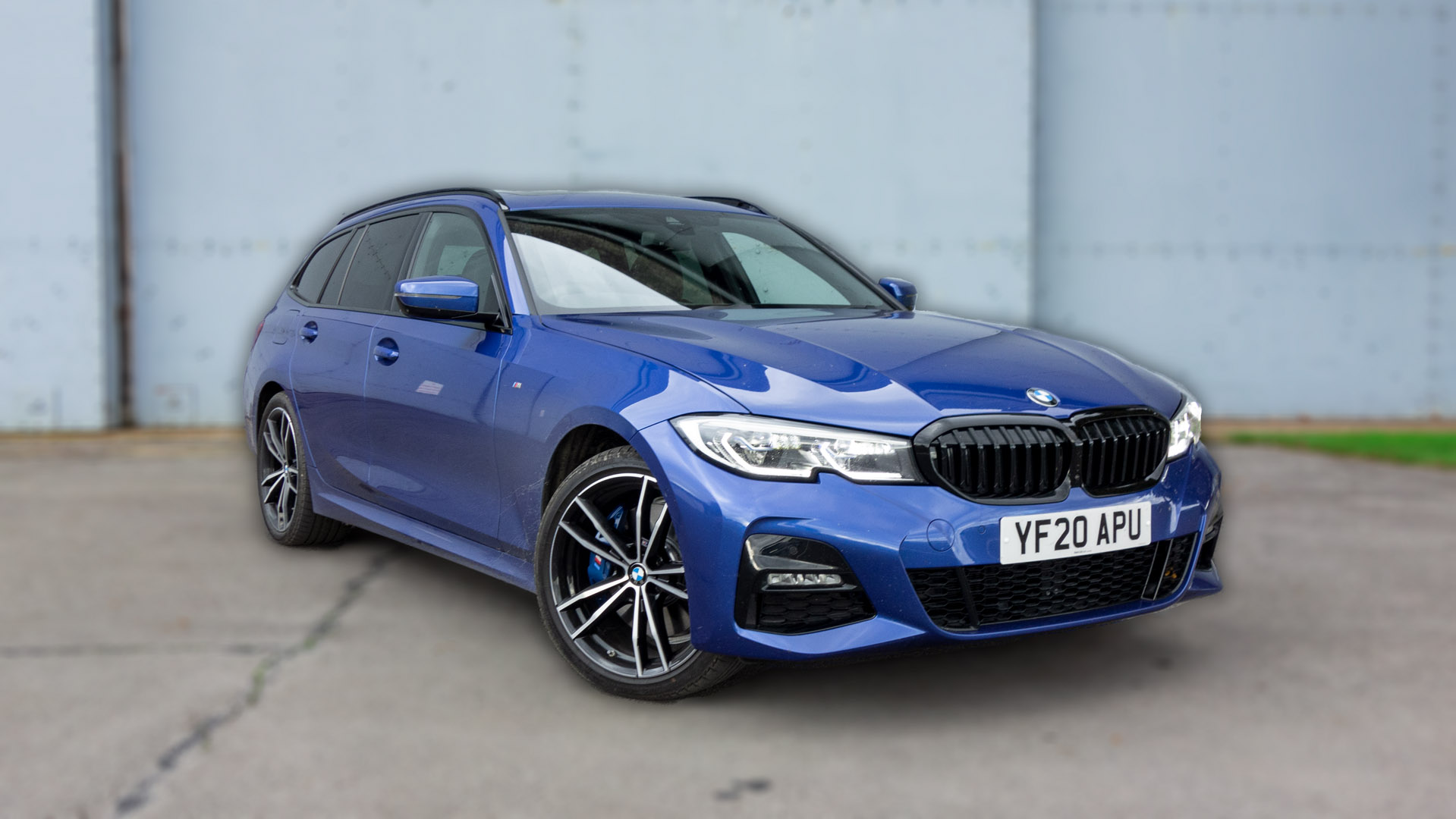 It can all get a little too confusing, namely when each vehicle has different options, too. The main thing to note is that the xDrive variants operate on an all-wheel-drive (AWD) system, while the ‘regular’ models are rear-wheel drive (RWD). If you don’t live in a challenging environment, we’d lean toward the slightly cheaper RWD model.

Better still, its WLTP CO2 emissions sits between 32-42g/km. By comparison, the few thousand pound-cheaper petrol variant (318i/320i) emits between 153-165g/km of CO2, instead. This leads to around 25% difference in Benefit-in-Kind (BIK) tax; a sizeable amount for those opting to buy a company car.

No matter which M Sport model you choose, they’re near-identical from the exterior – of course, the 330e features a charging port, which is located under a flap by the passenger’s side A-pillar.

While the front grille looked a little displaced on the 330e saloon, the elongate Touring looks more the part. That’s namely due to a non-chrome finish in the M Sport Pro Edition Touring, which reduces the emphasis of the car’s intake. Elsewhere, the estate has a sporty look from the side and an aggressive-looking rear design with taillights that wrap around the D-pillars. Two rear exhausts also reside here – they’re not concealed or replaced with fake outlets, which will be a relief for some.

There are 18″ alloys that come as standard on the 330e Touring, but one can upgrade this to a 19″ size for £750. The estate is also available in five colours, whereby the non-metallic Alpine White is free on the regular M Sport Touring. The metallic options are a £670 option: Black Sapphire, Mineral White, Mineral Grey and Portimao Blue (pictured).

Inside, the 330e accentuates the vehicle’s exterior persona. It’s got a sporty and practical design that oozes a premium feel. It’s immediately apparent as soon as you step inside the car as the all-leather upholstery looks and feels the part – it’s available in a few different colours: Black, Mocha, Oyster and Cognac; the Black with Blue stitching Vernasca Leather that adds M-style stitching costs an additional £500, and three £990 ‘BMW Individual’ interior trims up the quality, too.

As for the somewhat bucket-style seats, they’ll keep you from sliding around when taking country roads at speeds but also remain soft for longer-distance drives. There’s ample amount of headroom and legroom, too.

In terms of practicality, the Touring will seat five individuals, where there are four easily-accessible doors and an electronically adjustable rear boot lid at the back. At the rear of the cabin, the middle seat can be brought down to help accommodate longer-sized equipment, such as a pair of skis. The compartment also reveals two cupholder spaces.

Storage space is of utmost importance, and it’s no surprise to learn that the Touring has a larger cargo volume than its saloon-sized alternative. There’s 410 litres at the back, where this figure extends to 1,420 litres with the seats down. The saloon 330e has 375 litres and 1,385 litres, respectively.

Moving onto technology, the German automaker includes its comprehensive iDrive infotainment system with gesture support. If you’re not a fan of performing air commands, you can disable the feature and rely on the responsive touchscreen display or the rotary selector by the centre console, instead. An ergonomically designed gear selector also sits here, alongside the convoluted drive mode options.

As for the steering wheel, it’s pretty chunky, where those who have smaller-sized hands might struggle to fully grip it. It’s very functional, however, as the buttons on its facade operate media and provide a means of tinkering with the instrument cluster. There are also a set of flappy paddles that reside behind it to flick through the eight available gears. Past that, there’s a digital instrument cluster that displays all the key information.

Technology and comfort aside, the BMW 330e xDrive M Sport Touring comes to life on the road; it’s a marvel to drive – be it on a school run or to go at pace around country roads. It ultimately all comes down to how the car is set up; it’s made to feel like a 330e saloon – from its responsive steering wheel to its stiffened suspension.

Thanks to a combination of its 2.0-litre four-cylinder turbocharged petrol engine and battery pack, the 330e Touring dispatches up to 215 kW (292hp) of power and 420 Nm of torque – 300 Nm from the petrol engine and 265 Nm from the motor. This means it’ll propel you to 62mph in just 5.9 seconds and reach a top speed of 143mph. Near-identical figures to its saloon alternative. 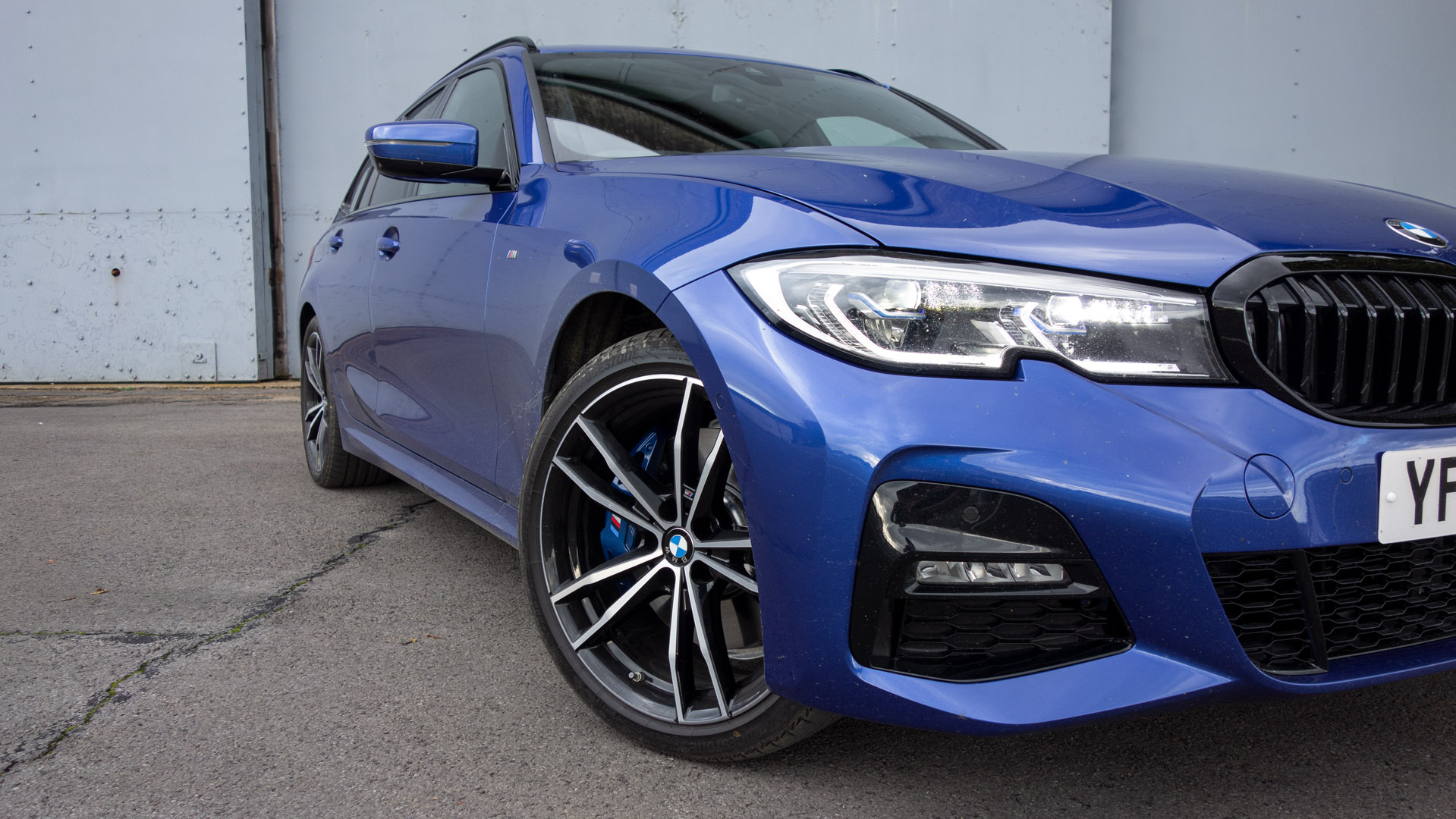 As for its AWD system (xDrive), it allows for the car to remain planted on the road at all times and have extra traction no matter the weather. In rain-dampened tarmac, the 330e Touring seemed to do just that; it was difficult to throw the car sidewards.

The biggest surprise, however, comes in form of its seamless eight-speed automatic transmission. Flicking through the gears you won’t notice any jolts or delay – it’s both responsive and can be shifted to manual mode, giving you full control of the vehicle’s gearbox.

Unfortunately, the same praise couldn’t be said about its limited all-electric range, which is quoted at 37 miles. Unsurprisingly, BMW has opted to use the same 12 kWh battery pack found on the saloon 330e. It’s also limited to a 3.7 kW input charge, meaning its cells will take a whopping 4hrs 30mins to charge till full via its Type 2 charging port. Thankfully, with the help of its fuel tank, the car is able to net around 550 miles of total driving range.

The BMW 330e xDrive M Sport Touring will bring a smile to your face – its joyous powertrain makes it one of the most practical driver’s cars around. Aside from its performance characteristics, the estate is both practical and looks the part from both the exterior and interior. The biggest thing letting it down, and the same could be said with a lot of hybrid estates on the market, is its limited all-electric range.

These are our first impressions, but we’d love to know what you make of the 330e Touring. Let us know in the comments below or via social media; we’re on: YouTube, Instagram, Facebook, Twitter and LinkedIn.