The Mokka-e is a subcompact crossover SUV that starts from £30,540. We found the all-electric Vauxhall to be a competent all-rounder, however, given its asking price fails to stand out over some of its rivals.

When it comes to its audio configuration, the vehicle houses six audio drivers – four at the front and two at the rear of the cabin. At the time of writing, there are no means of upgrading the system be it on the base-level SE Nav Premium trim, or the other three trims that the automaker has to offer.

To tinker with the vehicle’s audio settings, you’ll want to navigate to the appropriate menu on the 7″ or 10″ infotainment system; the size of the display depends on the trim level. Alongside the vehicle’s volume levels, you’ll find a three-band equaliser – here are our optimal settings:

*There is a multitude of different pre-set equalizer profiles to choose from, but we found ‘Personalised’ resulted in the best experience.

To connect up to the vehicle’s system, you can opt for a wired or wireless connection, both Apple CarPlay and Android Auto are supported through a wired connection. Over Bluetooth, the system supports the SBC and AAC codecs – the latter being the better out of the two, as it transmits at a higher quality.

As for media controls, they can be accessed through the display, via the physical knob found underneath the screen or via the steering wheel. 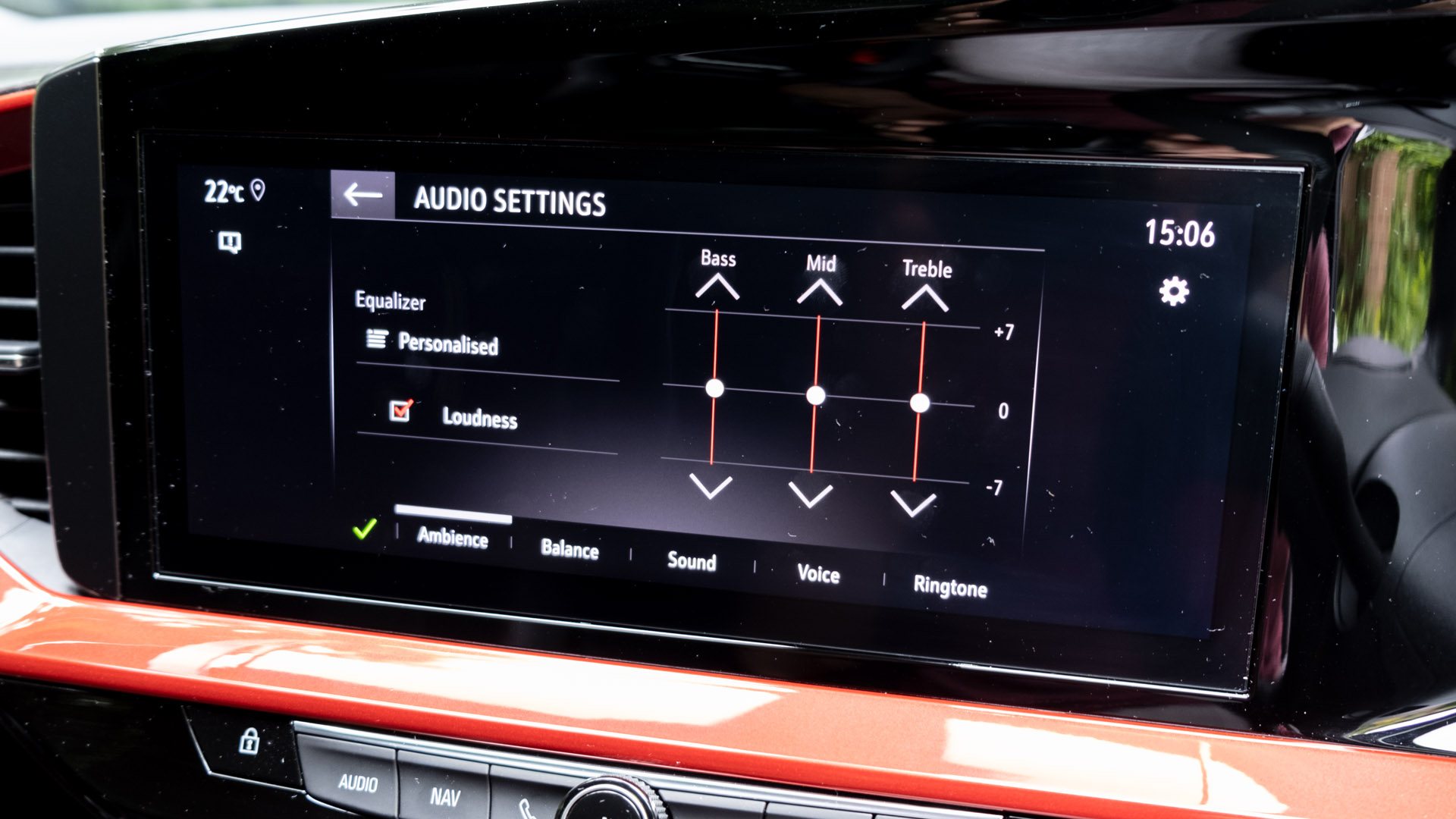 For a demo of the Vauxhall Mokka-e’s audio system head on over to our YouTube channel.

When it comes to its audio configuration, the Mokka-e doesn’t have a subwoofer in the boot and as such lacks that low-end rumble. Indeed, the system’s sub-bass extension is cut short, with Russ Millions x Tion Wayne’s song, ‘Body’ failing to hit those low-end tones, which many will come to expect when listening to that particular song.

On the plus side, the system’s mid-bass reproduction provides plenty of excitement and caters for that lack of sub-bass rumble. The lively sound can be heard both at the front and at the rear of the cabin, where the speakers positioned within each of the vehicle’s four doors provide sufficient punch. While there’s enough quantity in the bass department, the quality is a little lacklustre, where at times the audio drivers will sound a touch uncontrolled and wobbly.

Given the emphasis on the low-end tones, the mids are severely pushed back. One might think to add a few notches to the ‘Mid’ EQ, however, doing so detracts from the overall accuracy of Ariana Grande’s voice in ‘7 rings’. As such, you should expect a recessed reproduction in the mid-range frequency band, where male and female vocals won’t come across as jubilantly as one might expect.

As for the highs, they extend well at the top-end with a few notches added onto the ‘Treble’ EQ, namely at the front of the cabin, where the A-pillars have tweeters. This, combined with an emphasis on the lows, results in a V-shaped sound signature; this degree of elation will please the average consumer but will be a disappointment to budding audiophiles.

Moving onto the soundstage, the Mokka-e has a competent ability in separating different instruments, however, fails to provide good depth or width. While it’s not overly surprising given the compact size of the cabin and the limited number of speakers, one might have still expected a little more. 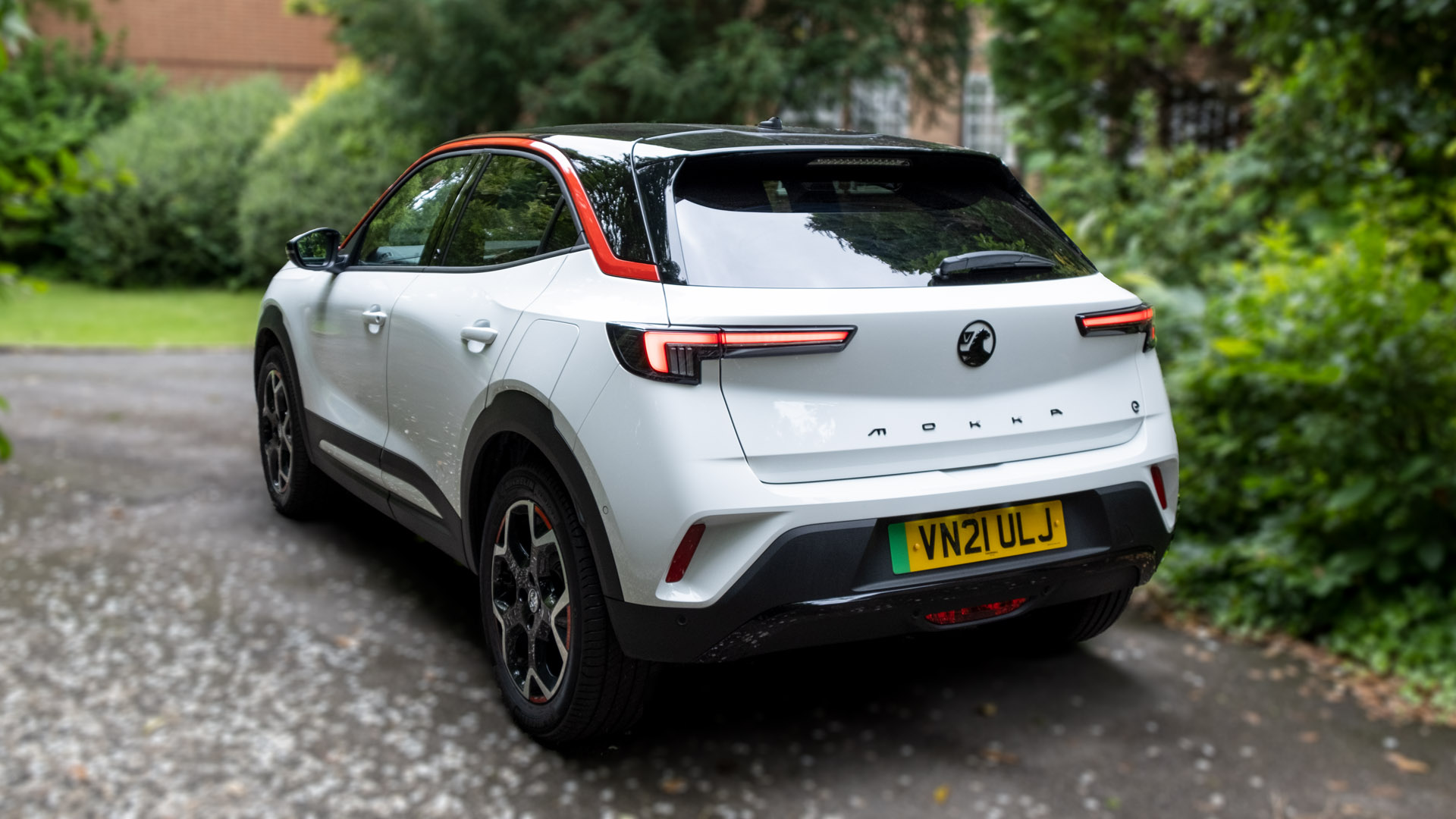 On the whole, the Vauxhall Mokka-e has an average-sounding system. It has got an exciting sound profile and does well in the mid-bass and high-frequency bands. However, it falls short in the sub-bass department due to not having a subwoofer, has recessed mids and a closed soundstage.

Given the vehicle’s asking price, it cannot be compared to the jubilant Harman Kardon system in the Kia Soul EV, the surprisingly good-sounding Peugeot e-2008, nor the bass-pounding systems found within the Hyundai Kona Electric or Kia e-Niro.

Of course, that’s our subjective view of the Mokka-e’s audio system, so we’d love to hear your thoughts in the comments section below or on social media; we’re on: YouTube, Instagram, Facebook, Twitter and LinkedIn.